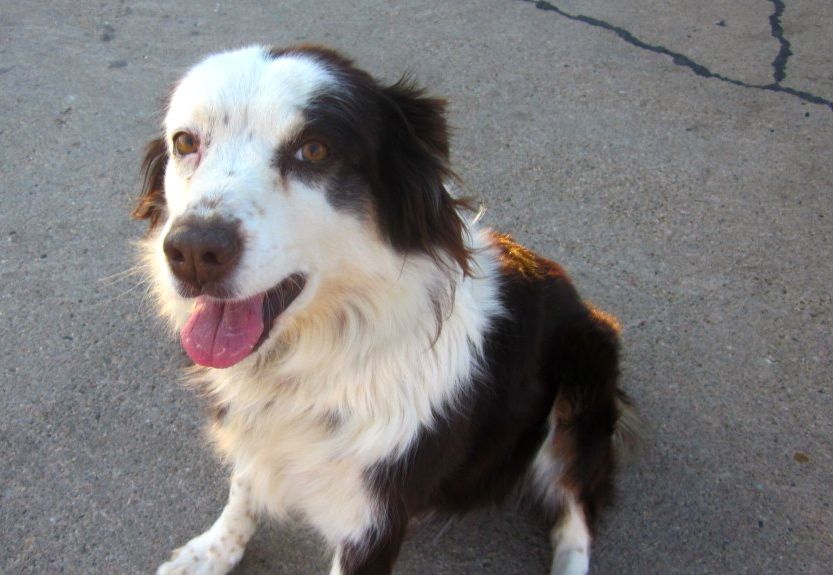 How many of you have an elderly dog?

(Hold up your hands, puh-lease. We’re all in this together. Higher, higher, because I’m in Nebraska and thus am very far from many of you–I can see you, Mom.) Okay, those of you with your hands raised–how many times have you looked at your older, struggling, blind and possibly deaf and of course wobbly on her feet and it goes without saying sometimes incontinent, doggy, and thought–with no small amount of guilt–that . . . it would be a mercy if she . . just . . . (insert that thought that we won’t put into words) . . . dot dot dot . . .

And then one morning, she follows you out to your garden–as she does every morning–but instead of muscling naughtily in the garden gate (which is not permitted) and lying on your little basil plants (ditto) and trudging through your newly-planted leeks (you get the drift), and scratching mightily while crushing your tiny carrot seedlings, and chasing a chicken or two to get your attention (it always works) and barking fiercely at the UPS driver who comes down the driveway (because she knows that you never notice that huge brown truck without her alert) and biting at the kitty when she gets too close to you . . . she lies down in some soft grass, and after a few hours of stillness–possibly the first time in her 14+ years that she has been so still–she dies. 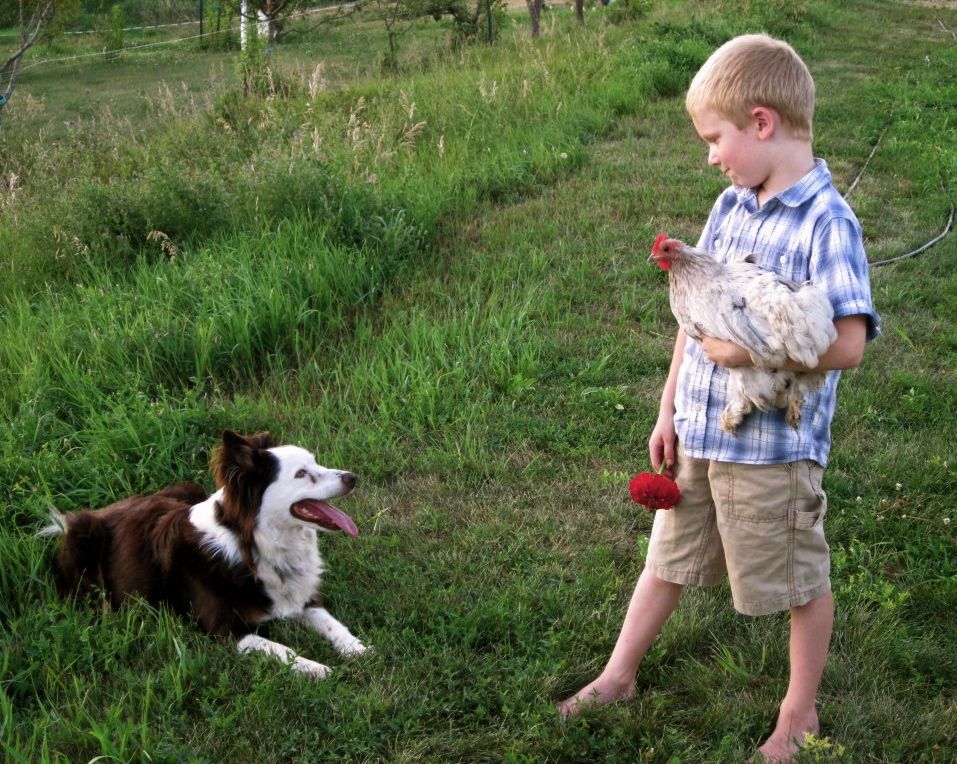 And then, gentle reader, although she was deaf (she couldn’t hear when you called her, so when you wanted her to come, you’d have to actually position yourself in front of her and gesticulate wildly) and couldn’t see very well (which means you had to watch for her very carefully when you were backing up your vehicle, because she sure as heck wasn’t watching for you) and sometimes got confused (like when she would forget where her kennel was, and would rush into the wrong room when you told her to go to her kennel) and even though all her bad habits from the years became even worse in her elderly-dog months (like tearing through the trash can, when you weren’t looking, to find the candy wrapper that she could smell at the very bottom–and then, as she lost her doggy filter, she’d do it even when you were looking) even though all of this was pitiably true, you still miss her like crazy. 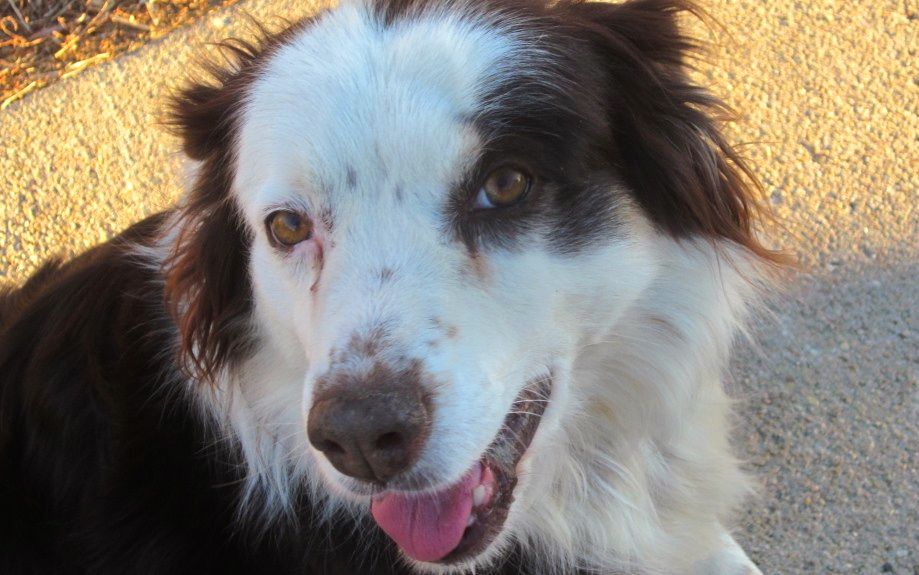 We lost our little dog Bea this week, to the ravages of doggy old age. I want to remember her and all her funny orneriness, so this post is dedicated to the memory of our funny, complicated, strong-willed, too-smart-for-us, unique little dog.

We’ve lived out at our place for fifteen years now, and we’ve only been without a dog one other time: when our dog Meisha got hit by a car on the road. She was a terrific companion, and I missed her so badly that Bryan rushed out to find another dog for me (so I would stop crying, already), and he brought home Bea.

Bea (named Beatrice, after the strong-willed and beautiful leading lady in Shakespeare’s play Much Ado About Nothing) was a bundle of nervous, anxious energy, even as a puppy. The first thing she did, when I picked her up the first time, was wet on me. A lot. Then she looked up at me, pleadingly.

She was adorable. Meisha had been The Perfect Dog–she was a pleaser dog, always studying our faces for indications of what would please us. Bea was not cut out of the same cloth. Even though Bryan took her to obedience class, she was a Law Unto Herself and very studiously chose not to obey, most of the time. 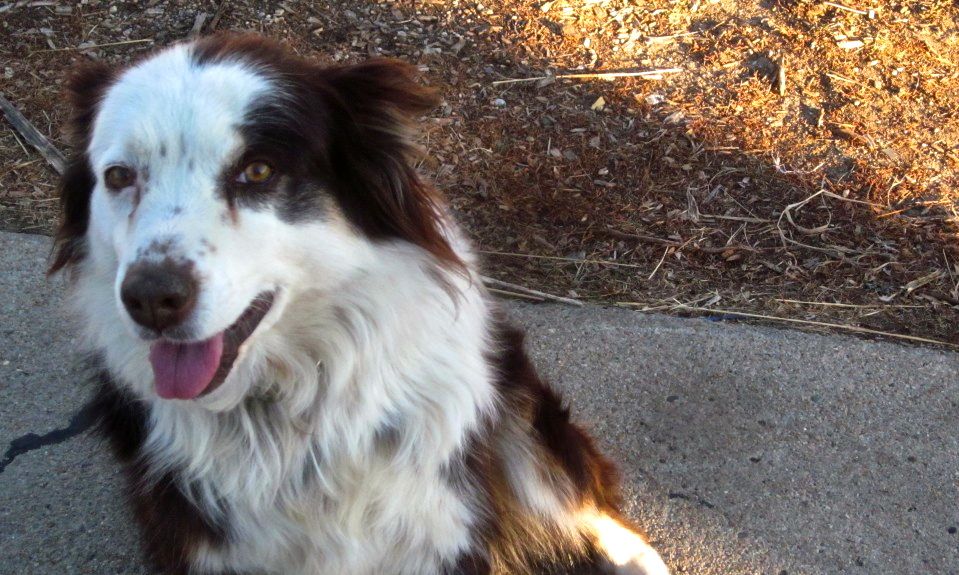 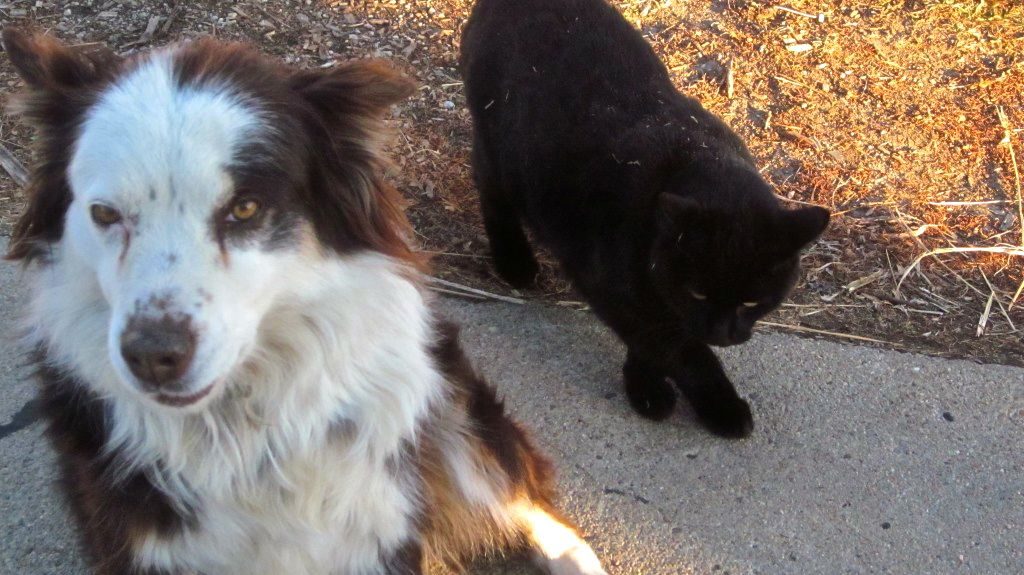 Bea: “Get away from me, cat, or I will bite you. I’m being photographed.”

I miss her like crazy, in the same strange way that I miss the orneriest and loudest and most unpredictable drama kids the most when they graduate and go on to make somebody else’s lives difficult, instead of mine. ( 🙂 I love you guys!!) She was an individual dog. She was more anxious than she was cuddly, and she preferred the safety of her kennel to our laps. She rarely let us pet her, until the physical trials of those last few months of her life mellowed her. Many visitors to our place remarked that Bea certainly was a nicer dog in her dotage, and it was true. Nicer. Perhaps not as interesting.

I’ve shared a couple of Bea stories with you in this space already, like when we tried to train her to chase away a fox that was decimating our chicken flock one by one. That is when she gained the nickname “The Bullet,” because of her speedy fox-chasing skills. 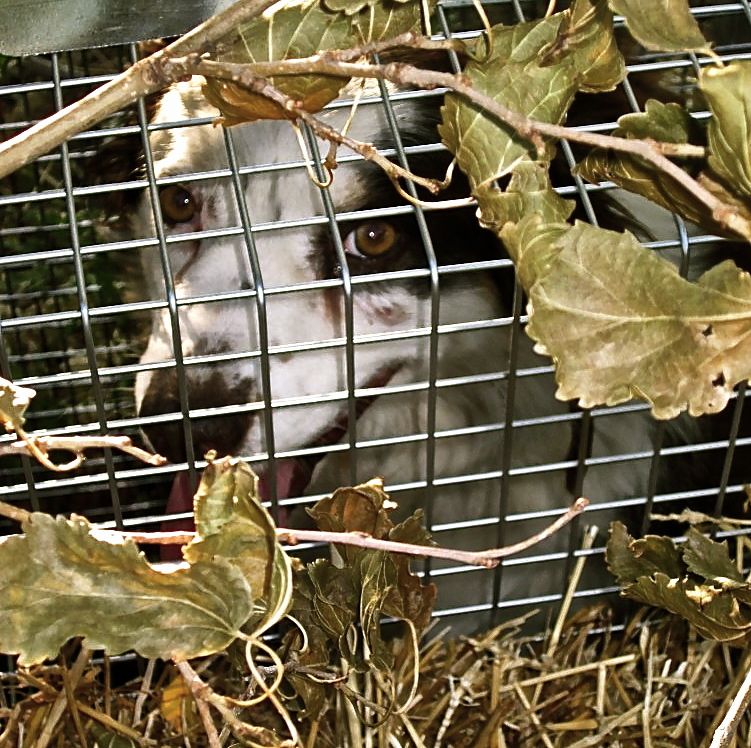 Bea got herself trapped in the live trap more than once. “Whaa Mom, the bait was cat food, what did you expect??”

Some of our Bea stories are hard to believe. People think we are making them up. But that’s the kind of dog she was: a dog who did things that sounded like fiction. I’ve already written about the day that I looked down at Bea and saw her brain, through a hole in her skull. I took her to the vet (um, yep, immediately, no question) and he admitted that (though he was in his 80s at the time) he had never seen such a thing.

That was the kind of dog Bea was. The kind of dog who could open every door in our house (even doorknobs, she’d stand up on her back legs and twist the knob with gentle pressure from her nose), who was a top dog and never made another doggy friend (even Ollie, our big black lab who was with us for 5 or 6 years before he disappeared a few months ago, she barely tolerated, and would bully him whenever she could), who–terrified of thunderstorms–broke out of her steel-barred kennel more than once, who–even without any training–would search out chickens every night when I walked out to shut them in, and would point me toward any mavericks that weren’t in the coop yet. 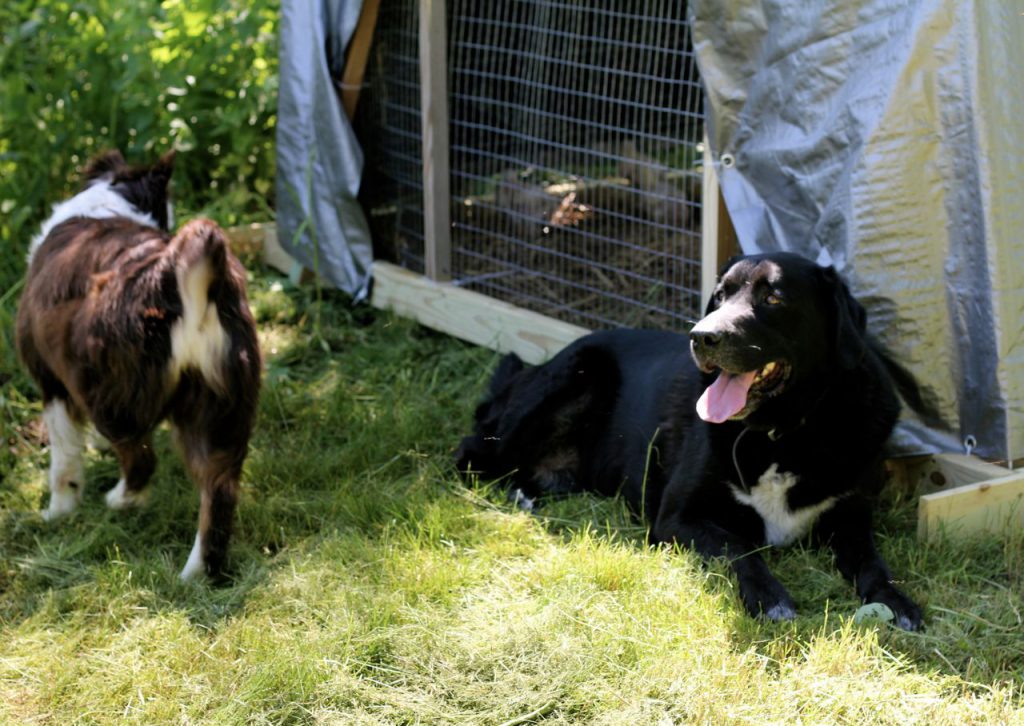 My favorite memory of Bea is probably this one: a few years ago, our neighbor’s steers kept getting out of their pasture, and they’d wander over to our place. I’m just a bit protective of my orchard and my gardens, you know, and I’d wake up in the morning to see those big placid bovines walking through my garden, chewing up my plantings, and trampling through my fences. I’d call my neighbor immediately and he’d drop what he was doing and come round them up, apologizing all the while. He’s a great neighbor. He just didn’t have great fences (he does, now).

One day, however, I couldn’t locate my neighbor, and his cows were again loose and grazing in our back pasture, inching ever-closer to my precious gardens. I called his home phone. I called his cell. No answer. No problem! As long as they didn’t go near my orchard or gardens  . . . an hour passed. Two. I had shut Bea up in her kennel, meanwhile, because I wasn’t at all sure what she’d do with those steers. I knew she’d chase them, I just wasn’t sure where she’d chase them to. Kansas? Canada? Who knows where she would stop? 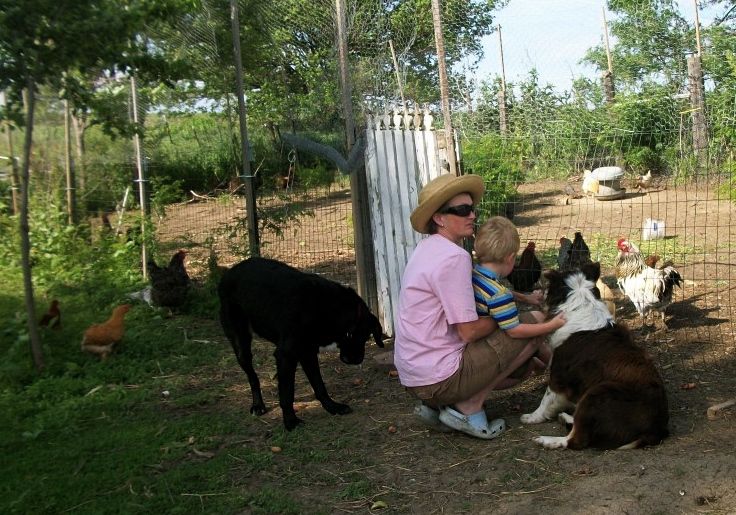 Bea always had to be closer to Mom than Ollie was.

There were at least twenty of them, and they were really big, as Angus steers go. A couple of times, I grabbed the kids and we headed out, trying to scare the cattle back home. We clapped. We yelled. We waved our arms like crazy people. It was hard not to let Bea do the job for us, but I was trying to be a responsible neighbor.

Those big boys were nonplussed. Not only did they stare at us with bored expressions, a couple of them got lippy, snorting and taking a few steps toward us. “Mom,” said Timothy. “It’s not worth the risk–is your garden that important that you’d risk our lives—??”

But inside we went, where I tried to stay busy and checked the messages and occasionally called my good neighbor again. And again. But then!

I glanced out the window for the hundredth time and I saw two steers in my garden–they’d walked right through my lousy garden fence–and one taking tentative bites from the little branches of one of my dear little cherry trees.

That–was–IT. I had given my good neighbor every possible chance to come round up his wandering beasts. Now I was going to give Bea her turn. She was begging me to let her out of her kennel, whining, twisting, occasionally letting out a sharp little bark. I didn’t mind at that point if she took the cows to the next county. I just wanted them out of my garden.

I let The Bullet out. She was off like a shot (no pun intended)–down the stairs, crashing out the front door, and running as fast as her little legs could carry her toward those big black steers. Unafraid. Bold. Knowledgeable. Cunning! And very, very fast.

I wish you could have seen it, gentle reader. Though our little dog Bea had never had any training in herding, she rounded up those steers as efficiently and quickly as if she had been trained for just that task. She nipped at their heels, she barked and ran and rounded them up, chasing them–every one of them–through our yard, around the pond, and across the back pasture, straight to our neighbor’s pasture, where they were supposed to be in the first place. She stopped at our property line and gave a volley of sharp, joyful barks.

She had done it. 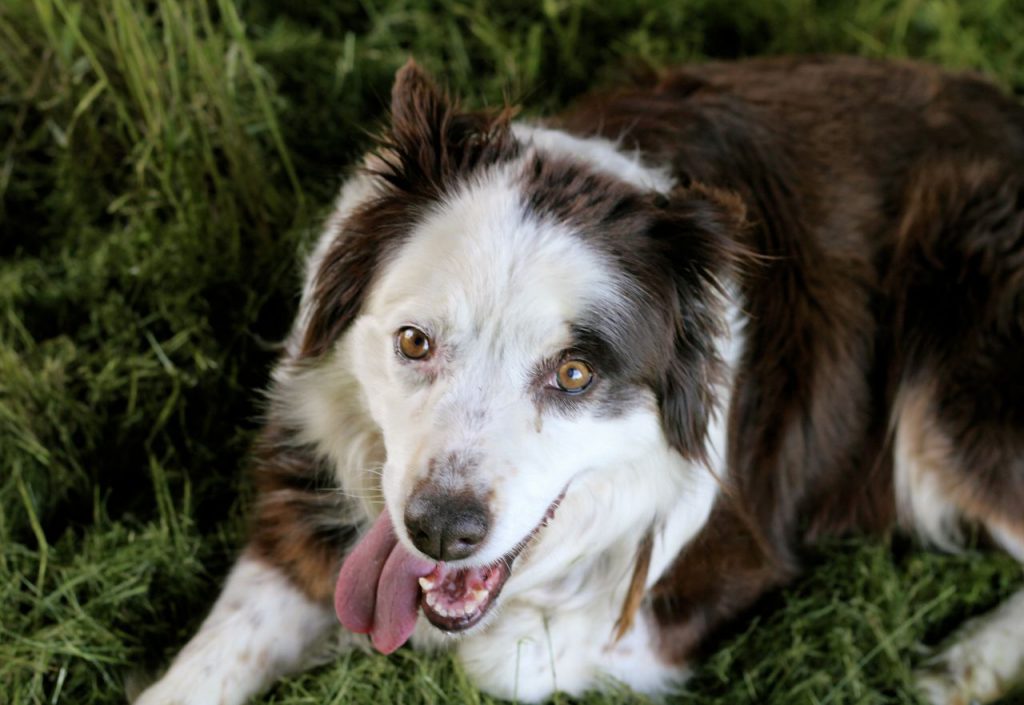 When she came running back, I promise you she was grinning. She let out an ecstatic bark. If she could have spoken people-language, she would have sang out “I was born to do this!” And actually, she was. She was accomplished and talented and wise and all-knowing about cattle-rounding-up, and she knew it.

With that, my favorite memory of Bea in mind, I’ll stop. Hug your little doggies tonight, hug them tight, no matter how prickly or oft-difficult or confusing they may be at times. They are a blessing.

Tagged on: Australian Shepherds, dog stories, elderly dogs and their care, how to take care of your older dog