First of all: Have you all ever considered that–though my motives may seem altruistic–sometimes my blogging does me so much good that it may be that my blogging is a selfish act?

That thought just occurred to me. Wait. Don’t tell anybody.

Second of all: my heartfelt thank you to astute and gentle reader Frank from Ohio. 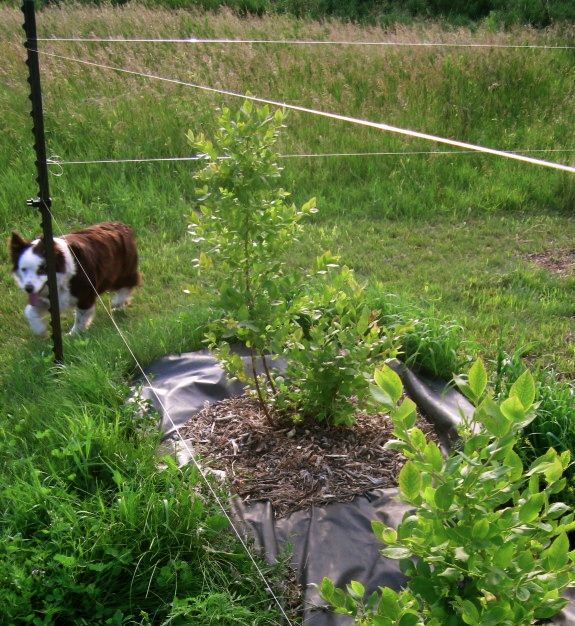 This photo shows Bea patrolling the perimeter of the fishing line fence that keeps the deer out of the blueberries. We actually have three strands in place now.

THREE YEARS AGO (Frank–where has the time gone?), Frank from Ohio commented on one of my most popular posts, which addresses how to make a simple fence out of t-posts and fishing line (I learned it from my friend Jamie) to keep deer out of the orchard, or berry patch, or vegetable garden. He shared with me that he and his wife were planting an impressive array of veg and berries and fruit trees there in Ohio, tra-laaa, like somebody else I know (whistling), but also that they had an impressive array of deer prancing (literally) through their property and wolfing down impressive amounts of their plantings. Frank was desperate to foil the voracious deer population, desperate enough to try the fishing line fence.

Later . . . much later . . . Frank reported back, to say the fence worked for a short time, but then, their cheeky Ohio deer started stepping right through it–mamas with babies, babies with visiting aunties, cousins and uncles and the whole contingency of local deer were partying at Frank’s place. He saw it all on a gamecam! Apparently he had been trying to get away with only one low strand, like some geezer on YouTube suggested (*secretly rolling my eyes*) *snif*. Frank said that he was going to add two more strands, and pull it tighter, to boot.

Later still, he wrote that his new fence had been working for several months! *Phew* I breathed a sigh of relief. I hate it when I hear that one of my fabulous tips doesn’t work, you know? Life went on as before–for me, and presumably for Frank and his wife and their lovely plantings.

I wrote blog posts, Frank patrolled his fences and estimated how many pies he’d soon have blueberries for. We both (presumably) were happy.

Frank reported back occasionally, and even added bits of color to his comments. Consider this:

By the way, I forgot to mention an added ‘eerie’ effect of the fishing line fence which may also factor into the deer avoiding it. When the wind blows the fishing line, if stretched tight enough, sets up an audible harmonic tone.

Frank, you’re awesome. I just love it that you added that detail. Although–no matter how much I listen–I hear no harmonics from my fishing lines. And the wind here blows all the time. 🙁 I know. Sad. I guess it’s an Ohio thing. *siiiigh* 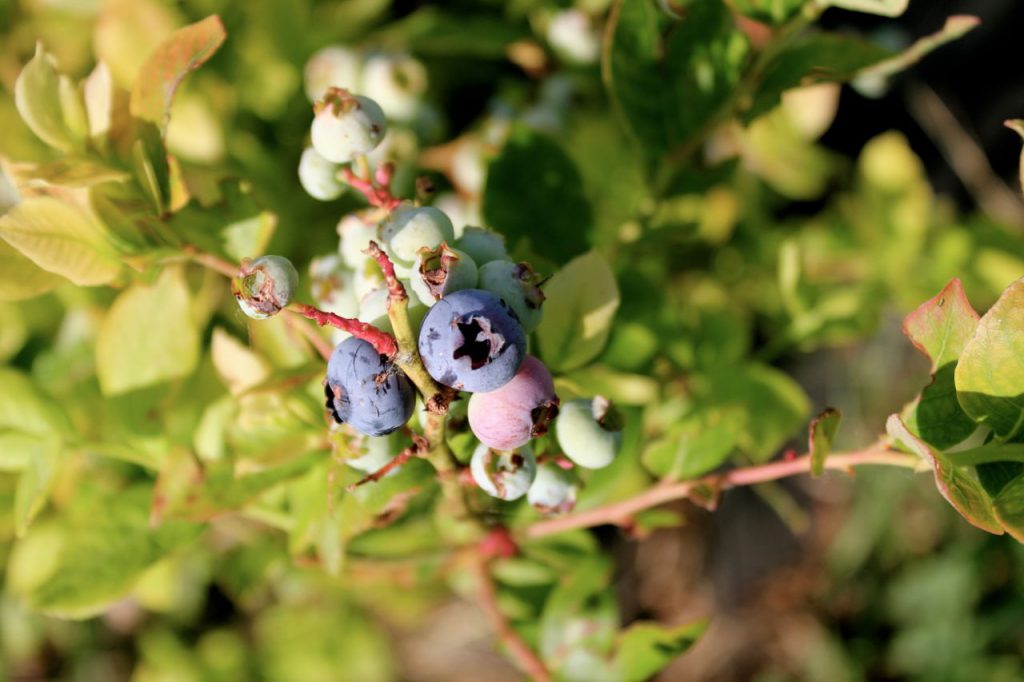 But then. *thunder clap*.

The worst. After many months, the deer got cheeky again, and broke through Frank’s excellent fences and resumed their snacking on his plantings. Vile. Deer.

Here’s what Frank wrote to me next:

I have another disappointing experience to add on the fishing line front . . . It works, but . . . You need to have, in my opinion, THREE levels of the line up (ankle, belly, shoulder high). It needs to be tight (pretty tight). And you have to have neighbors who are good shots. Despite all of the above, I too succumbed to the deer this year. No major damage, but they made it through all four sections of our garden efforts (vineyard, orchard, blueberry hill, kitchen garden). And we too did add layers of deterrents once we saw our false sense of security breached. We did exactly the same with the netting. Deer attacked my wife’s beans and pea poles until we threw up some spare netting we had about. Did the same in the watermelon patch and cabbages. I also got a good deal on some of those stand alone Havahart Deer sprinklers you can fill and set out around the perimeter.

How my heart went out to Frank! I suggested–weakly, so weakly, gentle readers!–that maybe there were areas of the world where the deer pressure and intense cheekiness was so off-the-charts that the CHEAP and EASY fishing line deer fence just wasn’t going to cut it. And, sadly, that apparently Frank lived in one of those areas. I had nuthin’ better than that. Lame, lame, lame.

I chalked this one up to my own failure. Failure to help my gentle reader Frank. I was despondent. I felt sad for Frank, I wished him well, and I figured he would chalk my suggestion up to massive fails he read about on the stupid interwebs.

Sometimes the life of a blogger is a puzzling one. I wanted so badly to help . . . but no. 🙁 Sadness.

So when I received a positive update from Frank this week, my delight was boundless. He wrote:

Here’s an update to our heavy deer situation in SE Ohio . . . : fishing line and empty pie tins. Those two things seem to be keeping the deer away from our blueberries and orchard. Fishing line, as discussed, does a good job, but is always ‘tested’ by the deer with eventual break ins.

I kept thinking what would keep them from even approaching the fishing line. Then, in my quest for nice zen garden designs it dawned on me. Those bamboo ‘deer chasers’ one always sees in Japanese garden designs… With their simple clicking sound. The unnatural sound is what apparently spooks the deer.

Oh. Jeepers. Thank you very much, Frank, now I really really want one of these. 🙂

(continuing on Frank’s note . . . ) So, as I don’t have ready access to bamboo, I rigged up the Appalachian version of the same idea. Empty aluminum pie tins strung up on the corners of our fishing line fencing. We use t-posts so that metal on metal clang in the most gentle breeze startles even me at times.

There’s been zero line breaks for over a year now and I still see herds of deer round and about our place. But none in our crop plots.

Finally found that tipping point in this deer situation.

Hurrah for persistence, hurrah for Frank, and hurrah for those stupid deer finally getting their comeuppance! There are, after all, plenty of other delectables the deer can eat, right?

And hurrah that we had some old pie plates kicking around (you know how we love pie) so Mack and I could head straight out and do a Frank Update to our fishing line fence. Just as Frank mentioned, I’ve been slightly startled when I’m outside, because the sound of those aluminum pie plates clanging away on the posts. I’m hoping that the local deer will be similarly startled, at least enough to turn around and go munch on the neighbor’s trees instead of mine (just joking, guys!). 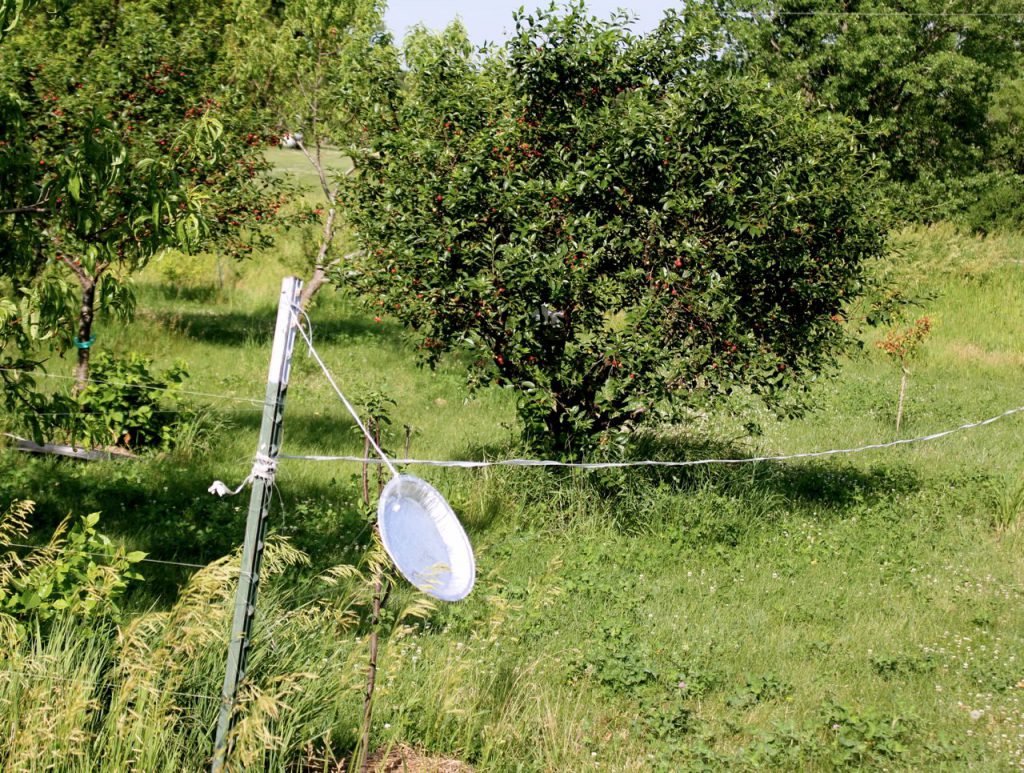 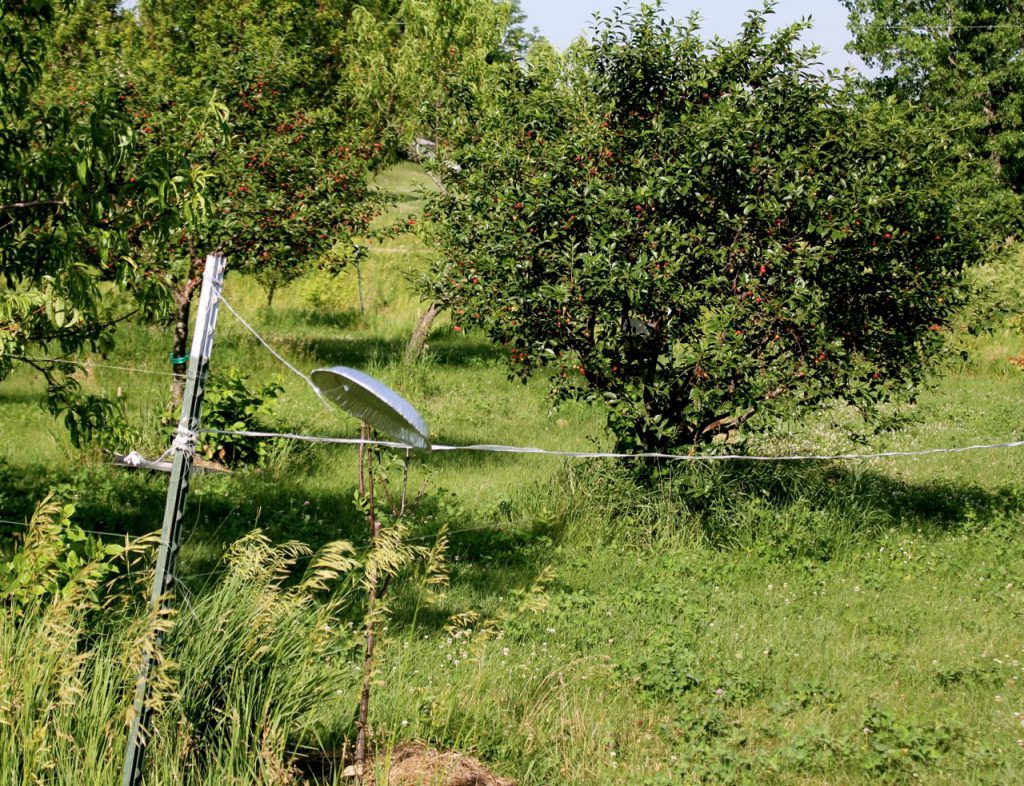 I’m so happy the wind blows nearly all the time out here! 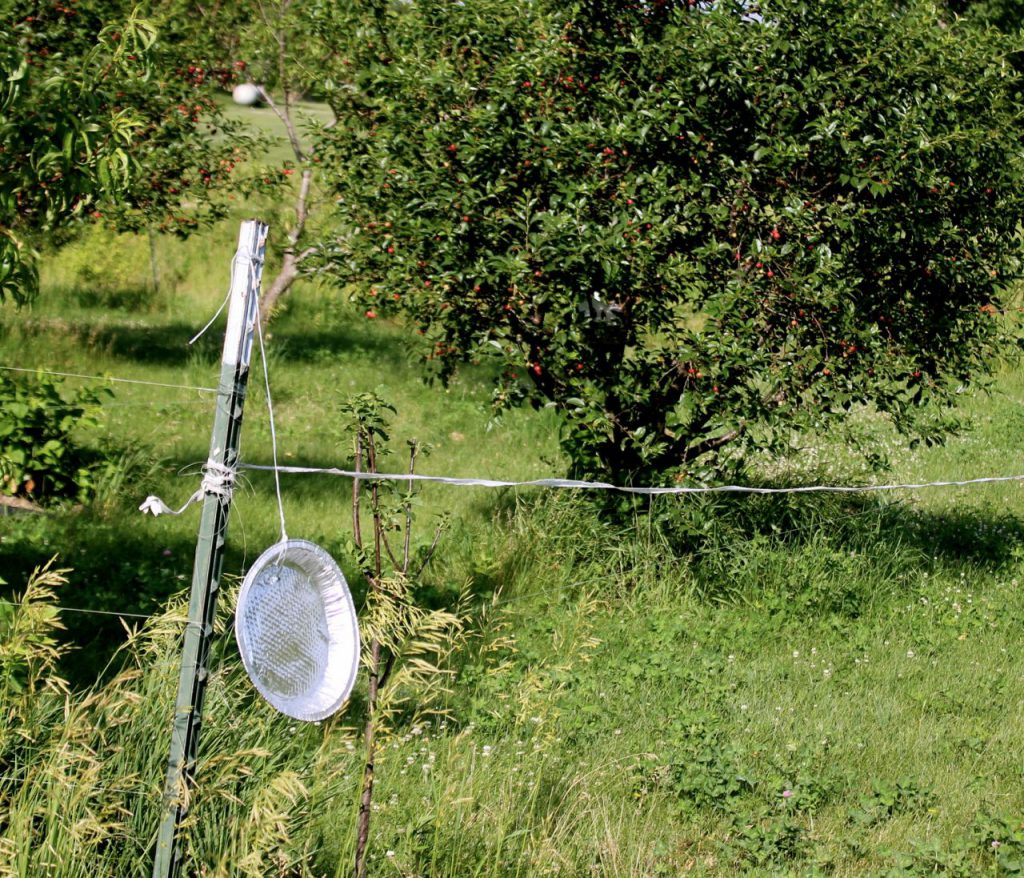 Check out those cherry trees!

Here are some more specifics from Frank:

. . . The metal on metal SOUNDS like human activity, which, when they can’t make out where it’s coming from, they choose flight instead of taking any chances. At least that’s what I’ve deduced by observation.

I’m doing this a couple different ways: One way I’ve hung them up on the opposite corners of our orchard plot. The other way, I’ve hung a couple WITHIN the blueberry area (inside the fishing line fenced area), like near the middle of the area.

I’m concerned that if they do figure out the sounds are coming from those twirling shiny things on the corners, they may lose their fear and come closer. So, I set the blueberry tins INSIDE the area and kinda lower (below the bush height) so they can’t see where the sound is coming from.

So. If you have tried the fishing line fence, and it hasn’t worked out as well as you had hoped, perhaps you’ll want to try Frank’s easy fix?

My fishing line fence must be patrolled and maintained and occasionally replaced, when deer do their thrashing-through-it thang. Now that these pie plates are in place, I look forward to not having to replace our fishing line now, for a good long time, and I have FRANK to thank for it. Frank for President! Thanks again, Frank, for taking the time to share your experiences with me. (If you want to read the post and all the interesting input in the comments, here it is.)

Now you understand why my blogging is actually a selfish act. 😉 I think I learn more from my gentle readers than you all learn from me. Thanks, guys!

p.s I’d love to hear back from you, if you apply Frank’s Fix to your fencing. We’re all in this together, aren’t we?

Tagged on: cheap and easy deer fencing, fishing line deer fence, how to keep deer out of the orchard