We were expecting company a few evenings ago, and I was working in the kitchen on our dinner. Not wanting to add to the mealtime mess in the kitchen, I sent little Mack outside to shuck a bag of sweet corn that I had brought home from the farmer’s market a couple days before. It’s that time of year, you know, when cooking a meal for company is easy as this: I send Bryan out to the grill with brats, I cut up a good fresh melon, and boil a pot full of sweet corn that was just picked yesterday. I put out the soft butter, the salt and pepper mills, and some great mustard. Easy. Delicious. Perfect.

We buy special hand made brats from the guys at the Cordova  Locker, who also happen to be our neighbors at farmer’s market. They make dozens of kinds of brats. I’m working my way through trying every variety. On this particular night, we had jalapeno and cheese brats, wasabi brats, and dijon honey brats. Yum.

Just a few minutes later, my husband Bryan (the “ole’ pro”), came into the kitchen, astonishment on his face.

“I can’t believe it!” he said, raking his hand through his hair. He was really shook up. Rattled. Flustered.

“What’s happened?” I asked, dropping the bottle of Great Value mustard that I was pulling out of the ‘fridge. “What’s wrong?” My mind, of course, was racing. Did little Mack fall into a hole that had just opened up in the earth? Did a mountain lion charge into the yard and grab one of the dogs? Or perhaps a flock of great blue herons swooped down and carried off the grill, meat and all? (Don’t snort–those great herons are big.)

Bryan shook his head, and after struggling with his emotions for a full minute or two, he finally found his voice. “Little Mack doesn’t know how to shuck sweet corn properly,” he said. He looked at me searchingly, as if he were looking at me for the very first time. He blinked his eyes. He shook his head in disbelief.

“And I thought,” he said, forming his words carefully, “that you were educating the children correctly.”

Feeling a bit defensive, and yet unaccountably relieved that all my panic-driven fantasies had not actually happened, I humbly followed my husband outside, to see just what the “proper way to shuck sweet corn” was. And what I had failed so miserably to teach the kids. (Brother!)

Most farm families that I know in our neck of the woods usually grow a little patch of sweet corn for themselves and for others, someplace on their acres, and we’ve been blessed more than once with a farmer friend who is not willing to let the extra ears that his family couldn’t use, go to waste. Then it’s time to go into production and shuck sweet corn and put it into the freezer. It’s messy. It’s fun. It’s a sticky mess! Of course it goes so much faster if you know how to shuck the sweet corn properly.

My husband remembers when he was a kid, having a farmer friend drop off bushels of sweet corn, and his own dad teaching him how to shuck it in this perfectly easy, fast, proper way.

So, without further ado, here–according to my husband–is the fastest, easiest way to shuck sweet corn. (curtsey) 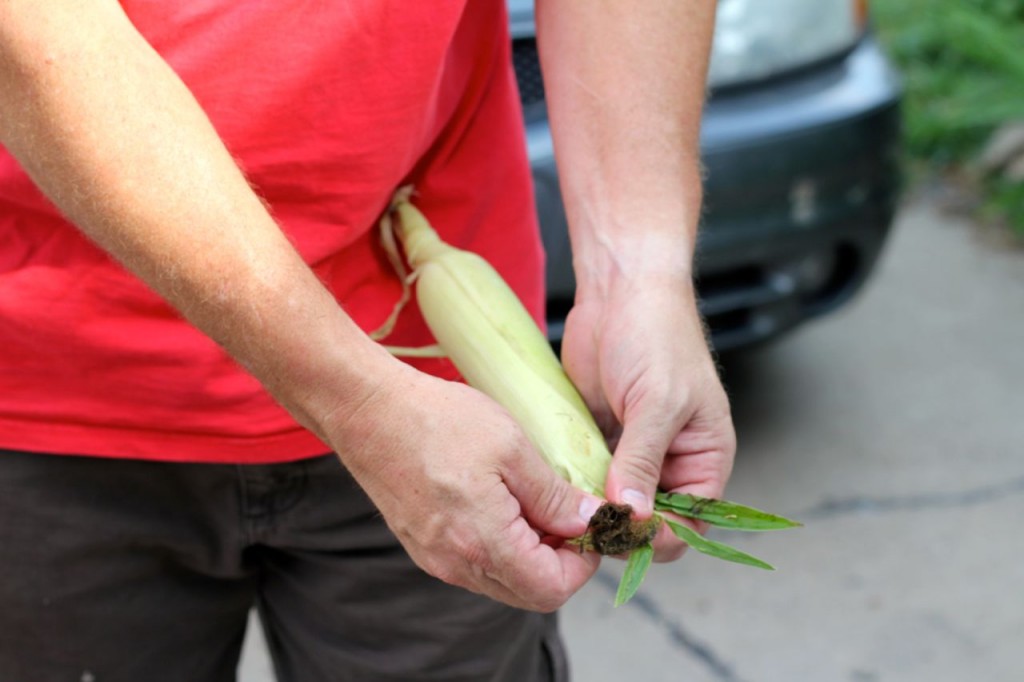 Next, pull the shucks and silks away from the cob in one quick pull, being very careful not to gouge a hole in your belly. (Italicized words my warning entirely.) 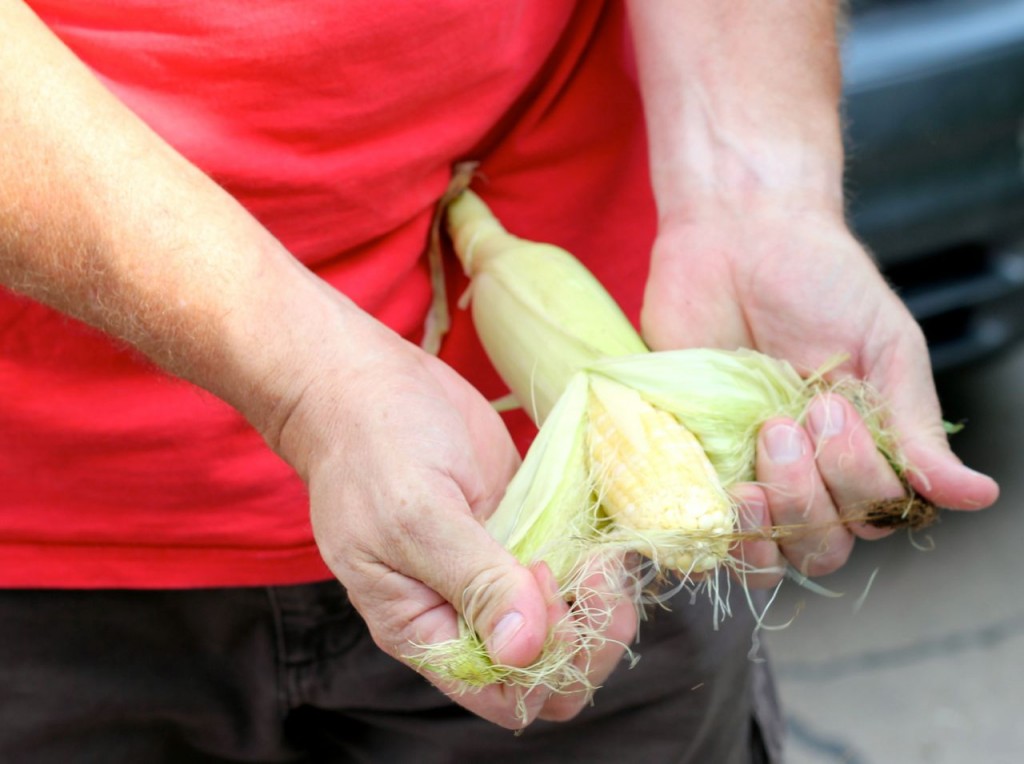 Now you’ve done it! Continue to pull the shucks and silks all the way off the end of the cob. 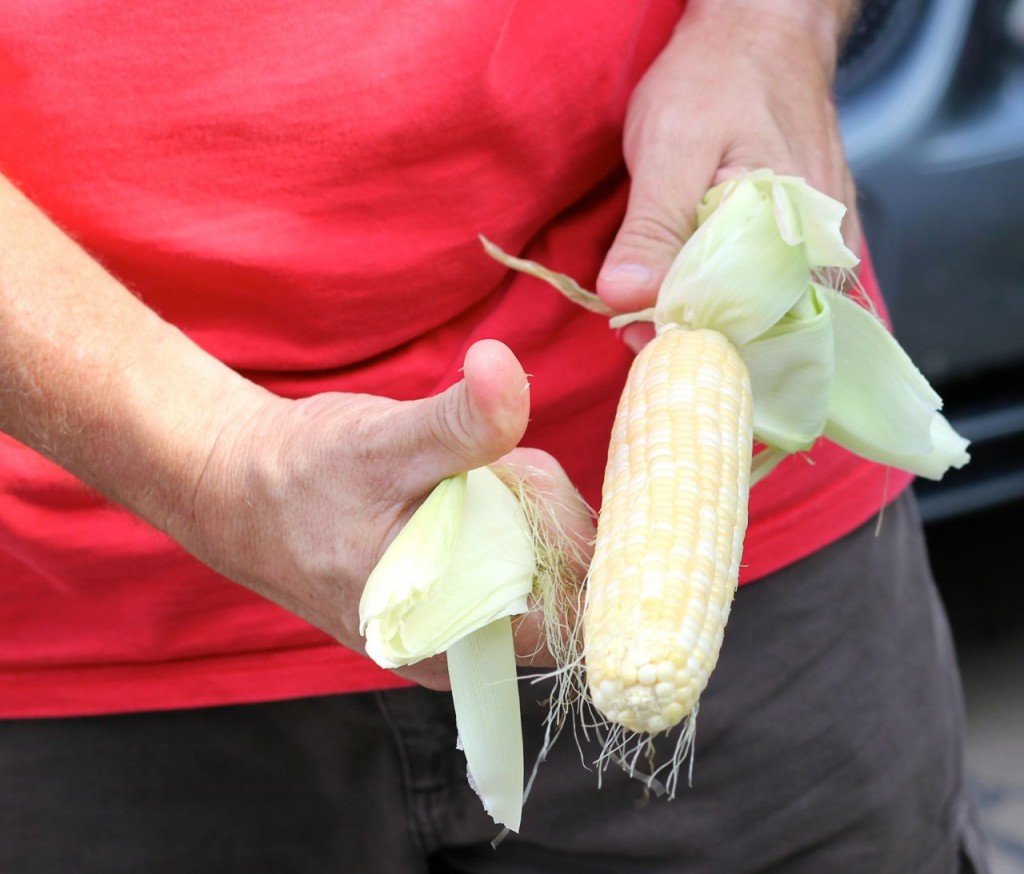 Finally, snap off the end, and the shucks and nearly all the silks (the most troublesome part, in my opinion) will come with it. This whole process takes mere seconds. 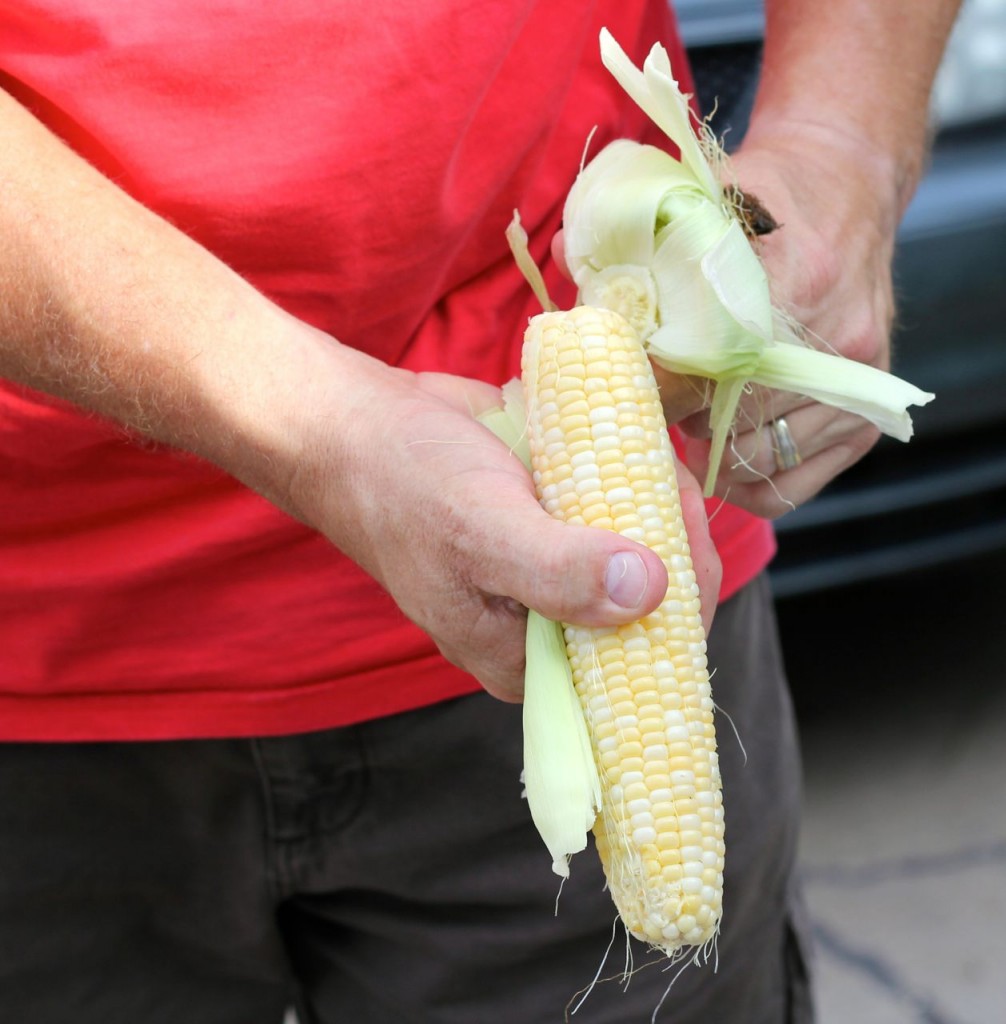 “That’s so impressive,” said I. “Show me again.” And again. Looks fun. One more time. 🙂 Tom Sawyer has nothing on me. 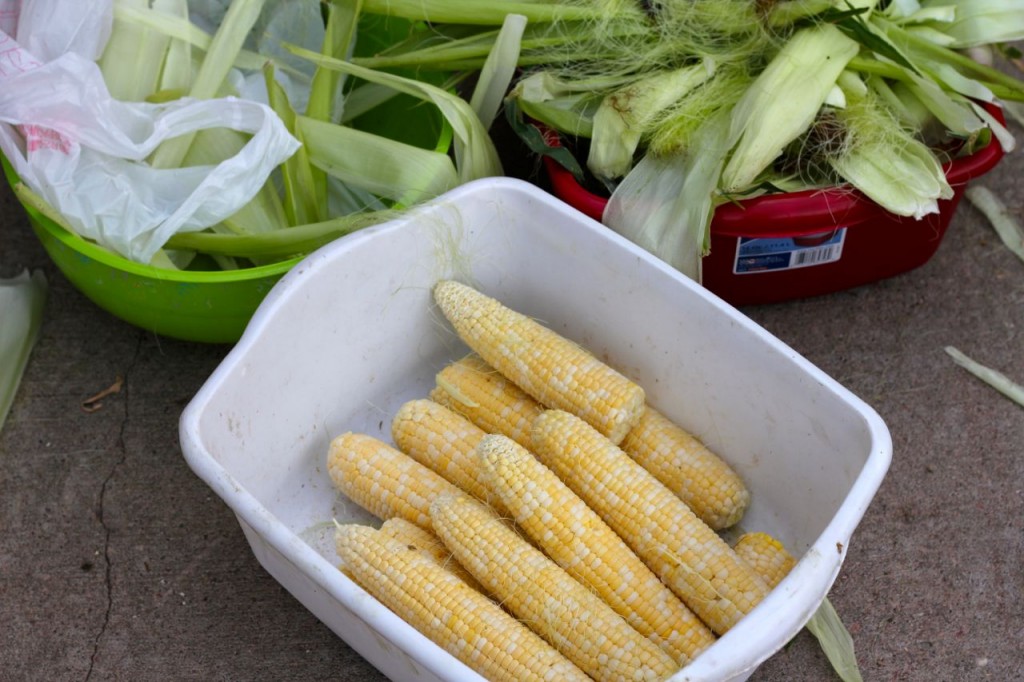 “Sure, it’s easy for you, Dad, when you’ve got the brute strength in your hands that you do,” quipped Amalia, who walked past at just this moment. But little Mack proved that even a smaller, less brutishly-strong person can shuck corn this way, too. 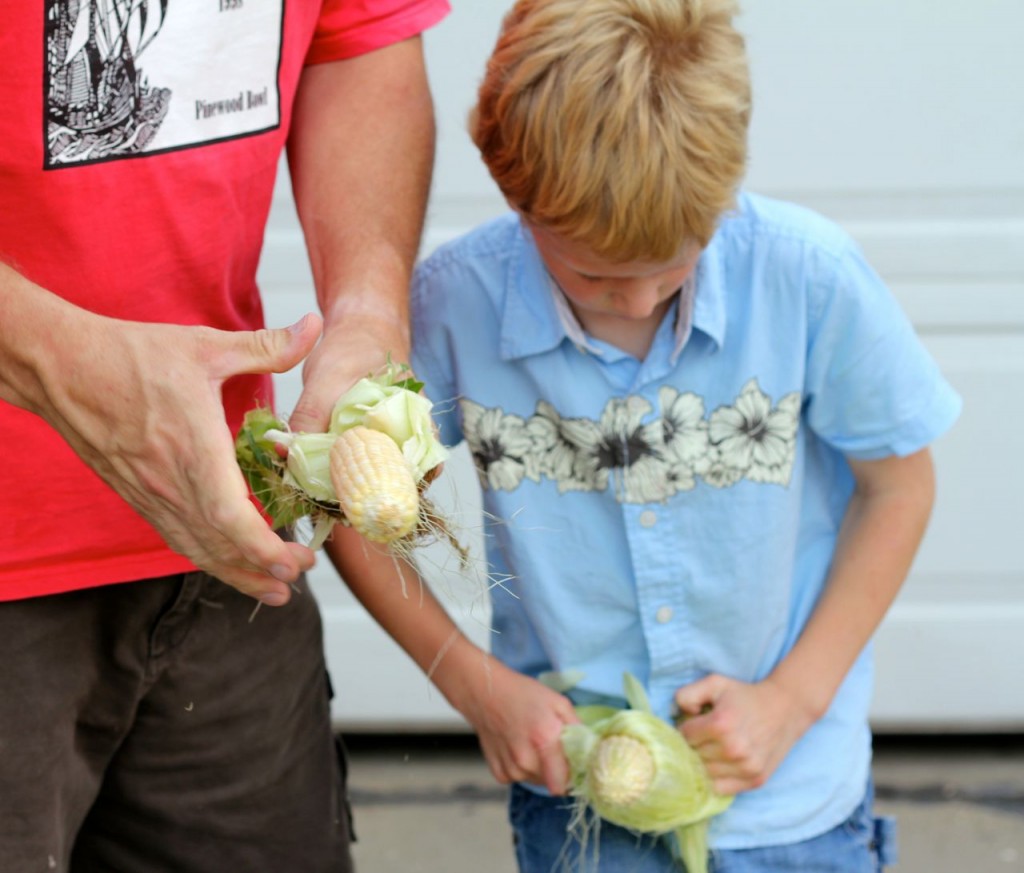 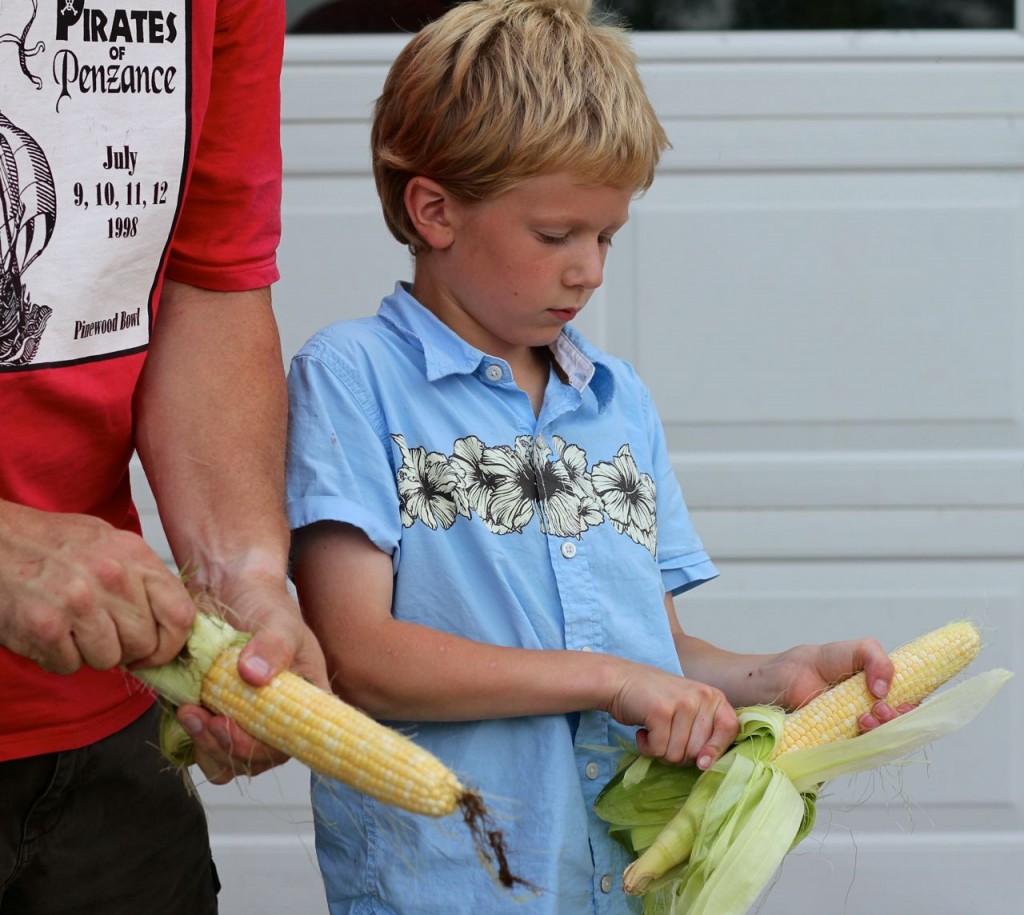 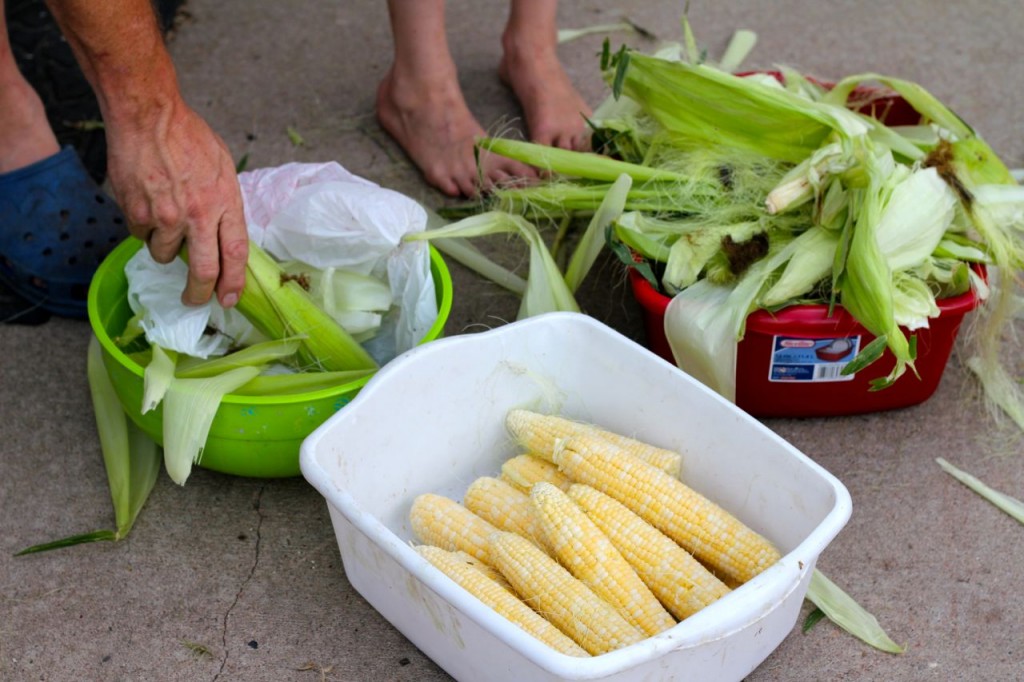 By the time the guys had the corn stripped, I had the water boiling on the stove, and it only took a quick rinse of the cobs to rid them of the last few bits of silk, and they were merrily boiling away. By the way, this fresh sweet corn doesn’t need more than 3 or 4 minutes of boiling before it’s perfectly ready to eat.

Have a great day, You, Gentle Reader o’mine. And thanks so much for stopping by my little corner of the world.

And, hey! If you have a few extra moments and want to learn something new, join me over at The Prairie Homestead Linky party, The Barn Hop!

19 thoughts on “How to shuck sweet corn–fast!–from an ole’ pro”