After several weeks of endless to-do lists scribbled down, toiled over, and checked off for the melodrama, all the while catching and struggling with a noxious respiratory bug, I feel a bit battered, bruised and exhausted, and not a little bewildered by my weakened physical state. It’s spring–or nearly so–and I’m too tired to sort my seeds. Or plant a row of radishes. What’s wrong with me?

All I really want to do is curl up in bed . . .wait . . . all I want to do is to take a long hot bath first, and then curl up in bed and sleep as long as I really want to, and then when I wake up, roll over and just sleep some more. I’ve been pushing myself too hard, and I can feel it in every bone and sinew. I can hear the pitiful cries of my ole’ body moaning “somebody make her stop, already,” And yet . . . and yet . . . 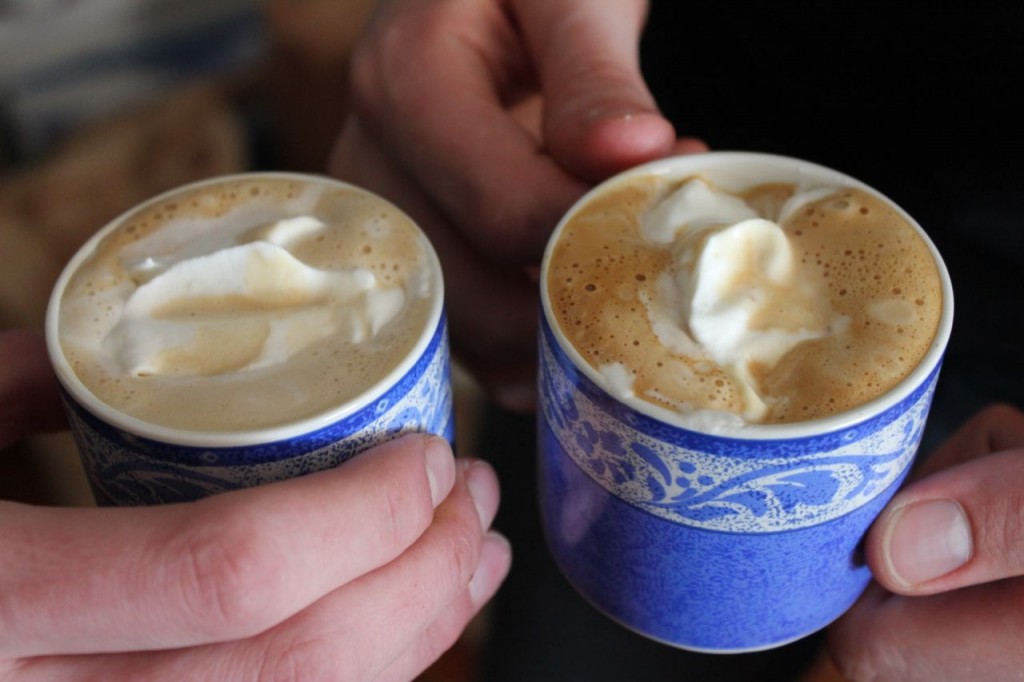 Need me a cuppa . . . or a cuppla cuppas . . . where is one of those fine young men I raised what can make such fine cups of cappucino?

The kids and I need to start school again (we always take a couple of weeks off during melodrama season), and I’ve got emails that need pondering and answering, and the laundry is piled to the moon (and back!) and little Mack wants me to sit down with him and watch, absorbed, while he teaches me how to use my new ‘phone (more about this later). And there’s the de-cluttering that needs to happen. I want to figure out a new facility for the meat chickens I want to raise this year, but I’m just too tired to think . . .

We had our annual cast pizza party last evening, which meant that I had to force my carcass about to clean up the house as much as I could stand, and then I did get to enjoy the evening being surrounded by some of my very favorite folks anywhere. So there’s that . . . but still I’m so–tired— 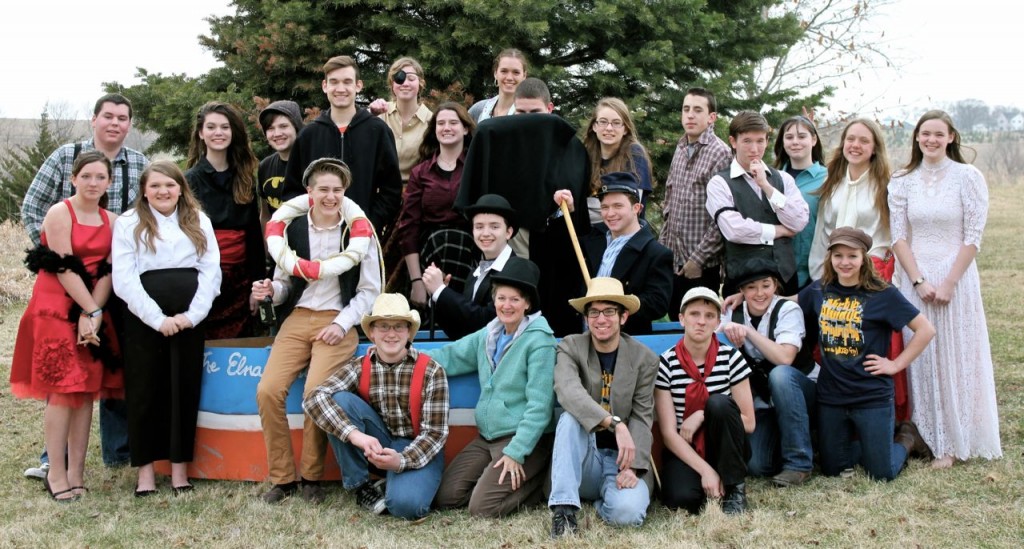 What a bunch of lovable loons!

All this whining and moaning inside my head and heart makes me think back to January, when my daughter and I talked at length about rest, and peace, and being brave enough to say “No” when we needed to. Bethany and I are both very good at saying yes, but we both stink when it comes to saying “No.” For me, if I don’t say “No” now and then, I don’t have time to rest. To really rest, that is. To take a day off. To sit down and play board games in the evening with Mack. To take an occasional nap in the afternoons. Oh yes.

Here’s Bethie’s recent blog post about this, along with an excellent cinnamon roll analogy. And here’s Bethie, herself: 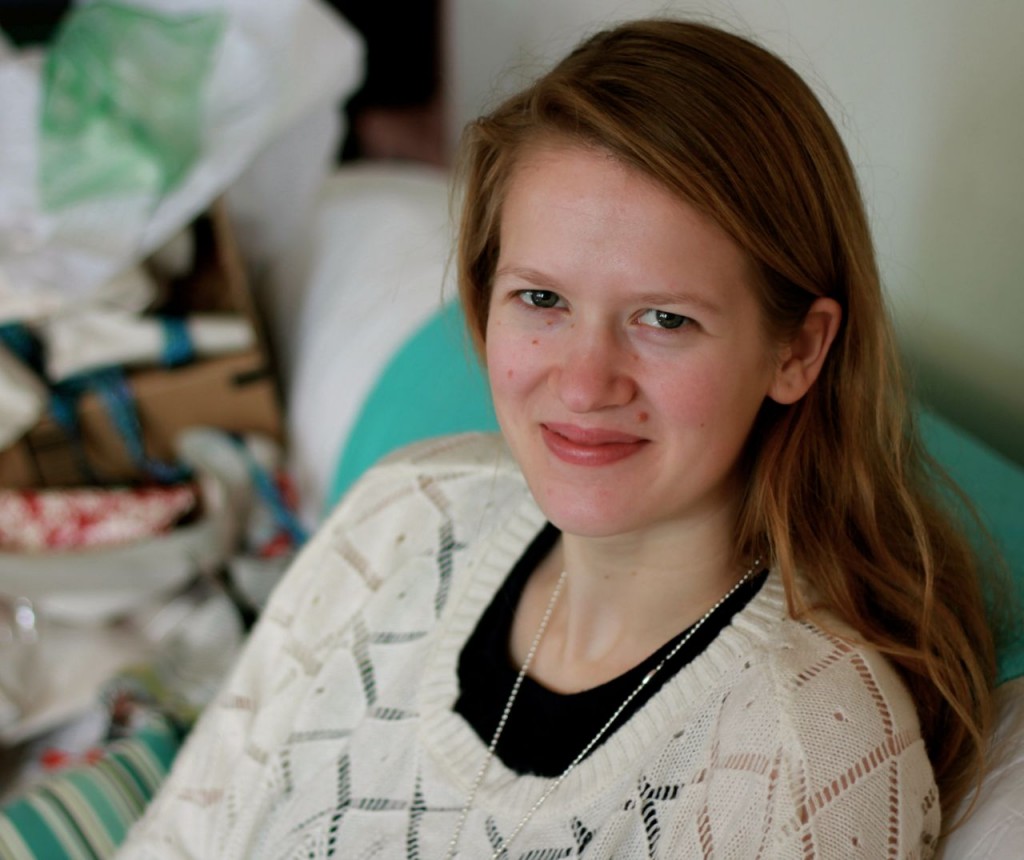 Here’s my beautiful daughter Bethie and my partner in crime, er, in learning how to say “No.”

I can see that the only time that I’ve taken time off to rest during the past few weeks is when my body refused to go, in other words, when I finally got sick. Thanks bunches, body.

Even though I did get run down enough to get pretty sick during the past few weeks, I’ve learned a great deal in the first three months of The Year of “No.” Here they are:

1. Thing One: Many will not applaud your efforts. When you experience a backlash from reorganizing your priorities so you’ll have more margin in your life, don’t be surprised if you get some challenges from people that you love and admire. After all, they are your friends and probably are just as over-committed and tired as you are. 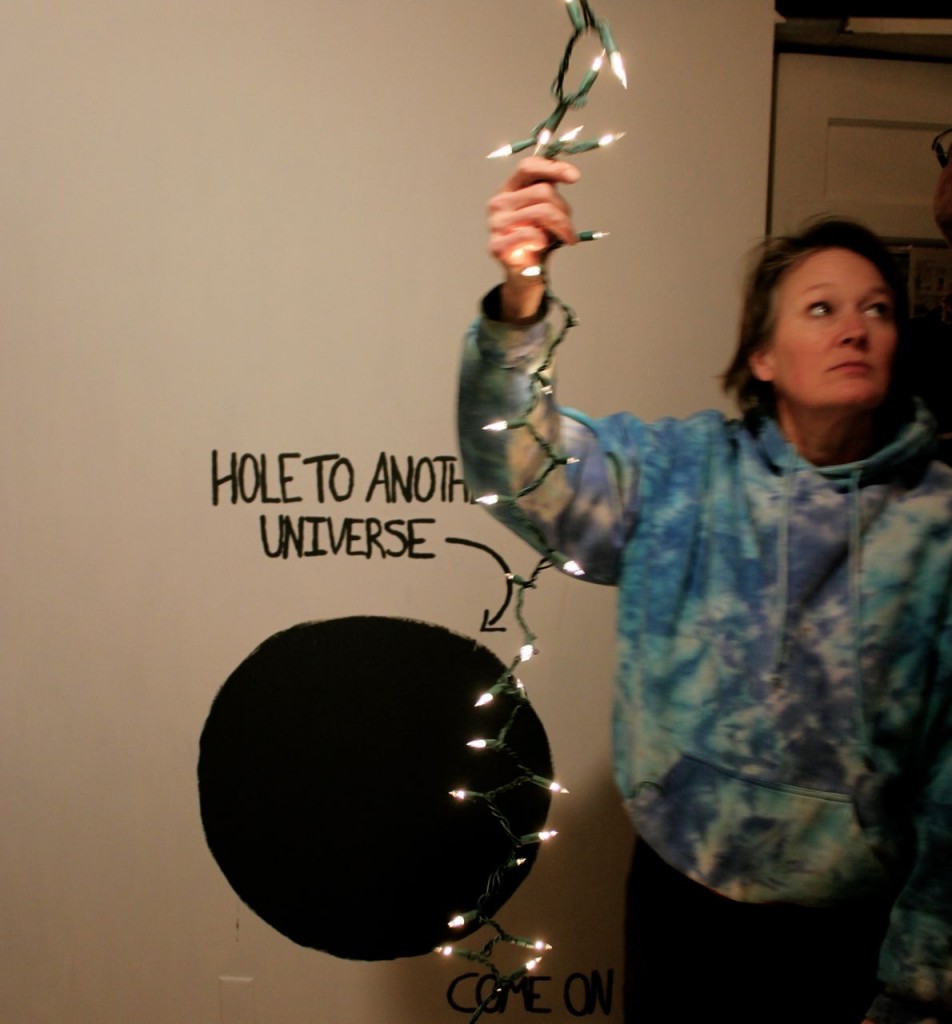 We did a little basement remodeling work in Amalia’s room before Christmas. I’ll write about it soon.

2. Taking care of yourself takes time. Plan for it. It takes time to exercise, to eat properly, and even just to make yourself those big glasses of ice water that you know that your body is craving. It takes longer to make a salad than to grab a piece of leftover pizza. It takes time to get enough sleep to feel energetic the next day. But you are worth it, you know. If you don’t take care of that body that God has blessed you with, who will?

3. Taking time to rest is not a crime, for Pete’s sake. For weeks, the kids and I worked on the melodrama seven days a week (we went to church on Sundays, but didn’t take time to rest afterwards) which was unwise and likely contributed to our current ill health and malaise. God took a day off, after six days of toil. Why shouldn’t we? 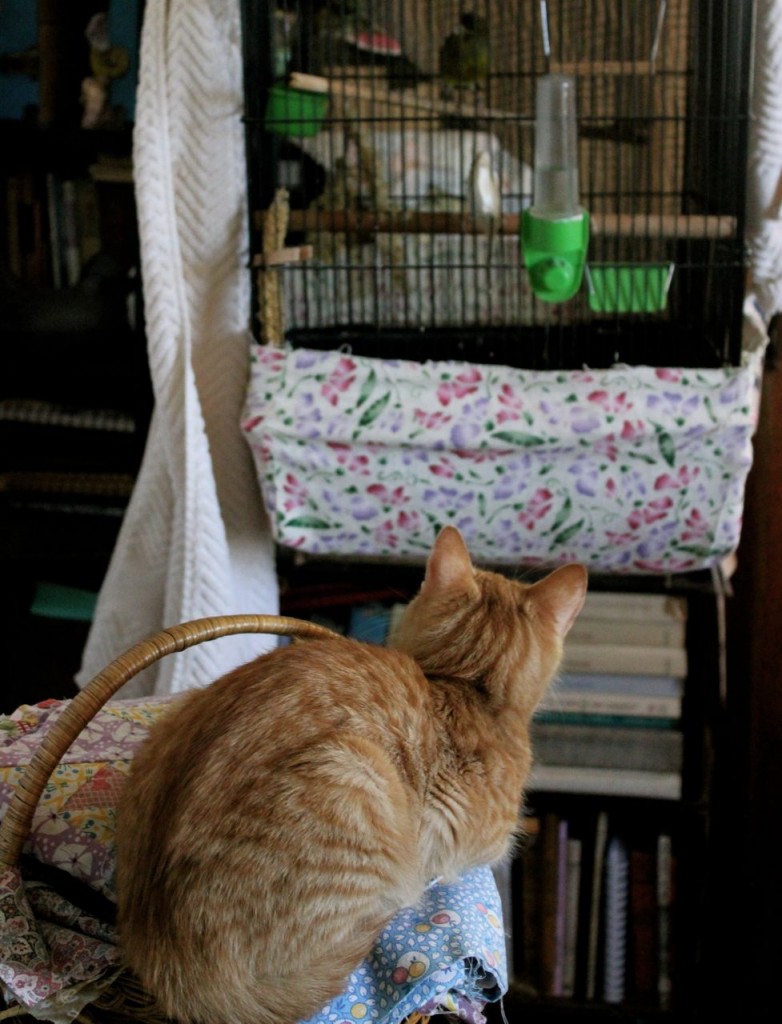 Our Lolo studies my canary, Luciano.

4. Saying “No” might mean asking for help. Which I stink at. If I’m terrible at saying “No” (which I am) then I’m really, really terrible at asking for help. But if you’re trying to do Something Grand, you probably are going to need help. There are people in your life that are at the ready, probably just waiting for you to ask. So ask. What can you lose?

I experienced a bit of a backlash to my announcement of the “Year of No” from some friends. I know that I will experience more of it in the months to come. A few challenges. It took me aback a bit. It made me wonder if I was just being selfish. Then God did something quite marvelous. He (quite literally) took my breath away. He spoke to me, the very next day, from his word. 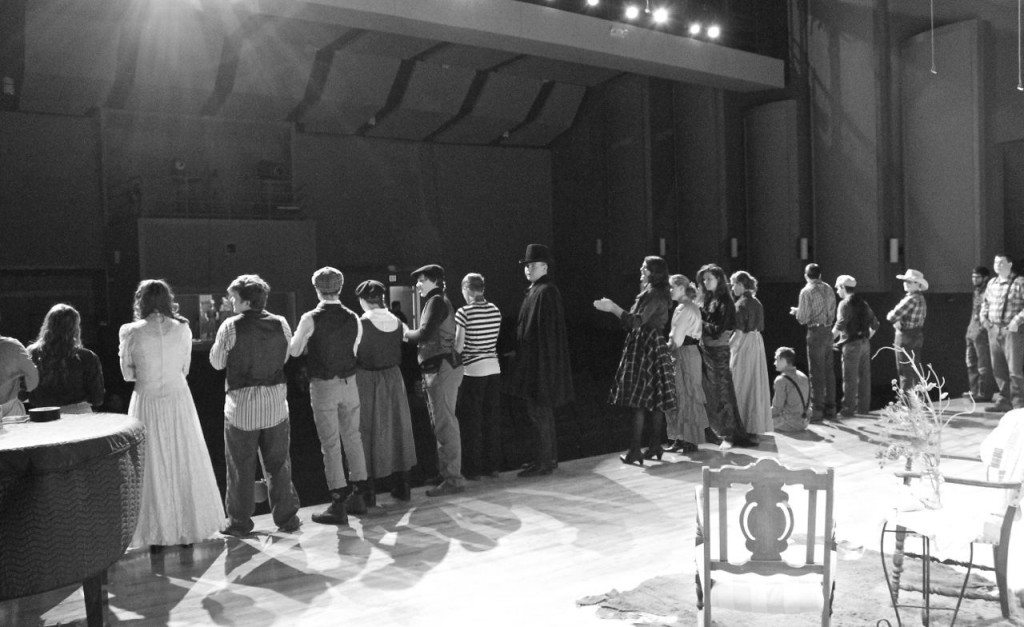 The kids and I were doing our morning Bible study together, and we were reading Exodus 18. Jethro, the father-in-law of Moses, had come to visit. Moses got up in the morning to do his usual exhausting daily routine: he would sit and make judgments for the people who came to him, all the livelong day. It must have been quite tiring. At the end of the day, his father-in-law asked him “What the heck are you doing? Why are you doing all this work, while the people stand around you doing nothing?” (I paraphrased. Just a bit.)

Moses replied: “Because the people come to me to seek God’s will. Whenever they have a dispute, it is brought to me, and I decide between the parties and inform them of God’s decrees and instructions.” Did you see what he said there? “I am saying “yes” to God,” he said. “I am Doing Good, doggonit it.” In a nutshell, that’s what he said.

Do you recall what Jethro said? He said “What you are doing is not good. You and these people who come to you will only wear yourselves out. The work is too heavy for you; you cannot handle it alone.”

“The work is too heavy for you; you cannot handle it alone.”

Other versions say “You’re trying to do more than one man can do.”

My eyes filled with tears at this. I couldn’t believe it. It’s exactly what I needed to hear from God that morning. “You’re trying to do more than one person can do. Furthermore, Silly Girl o’Mine, you can’t handle this alone.” Jethro went on to tell Moses how to choose Godly men to train, and then delegate the simple cases to them, and to take care of the hard cases himself. “If you do this and God so commands, you will be able to stand the strain, and all these people will go home satisfied.”

Everybody benefited, not just Moses, himself. The folks standing around were taken care of, Moses was no longer overburdened, and his helpers learned some marketable skills in mediation, it appears. And Jethro went home, probably well satisfied with himself for teaching Moses about saying “No.”

The takeaway from all this? This past week or two of illness and exhaustion should teach me to redouble my efforts in being determined not to overburden my schedule, as is my wont. It is perilously easy to say “Yes” but so difficult (for me, and perhaps for you, too?) to say “No” without beating myself up about it afterwards.

What about you? Are you trying to do more than one person can do? Do you need to say “No” to something, to obtain time to take care of yourself? It’s not a selfish thing, you know, if your body and spirit are begging you to stop. To say “No.”

To rest a bit.

Tagged on: how not to overcommit yourself, how to say No, Jethro and Moses Exodus 18, saying no with grace, The Year of No

13 thoughts on “Update on “The Year of No,” and what Jethro told Moses”