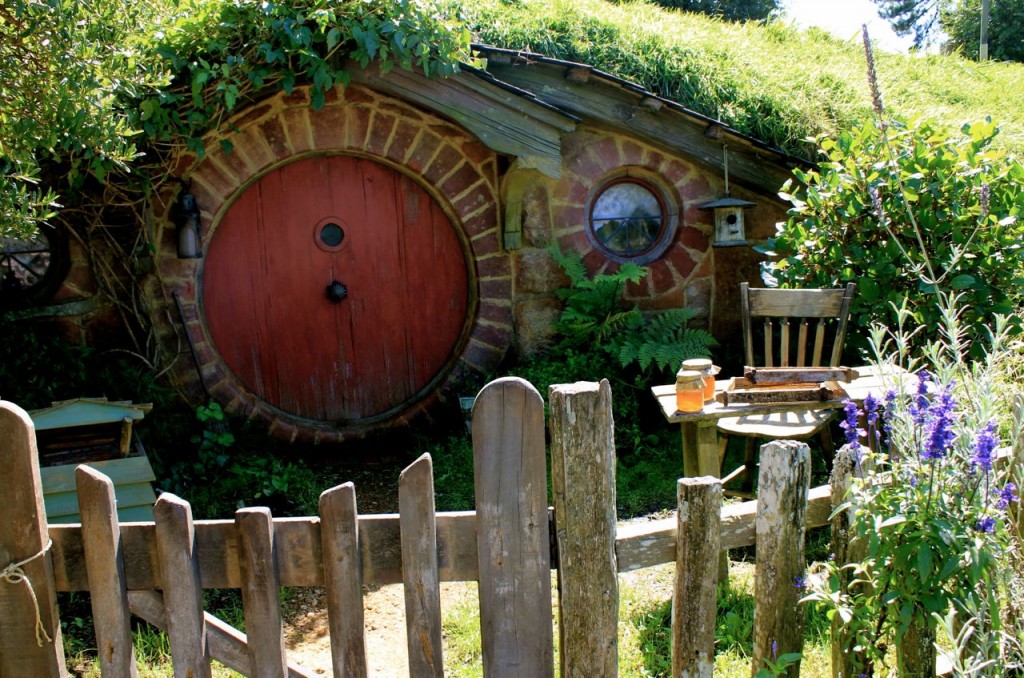 I remember the first time I discovered The Hobbit, by J.R.R. Tolkien. My Dad had a drugstore in Nelson, Nebraska, where I spent quite a bit of my time after school and on weekends. One day I discovered–much to my dismay, being a bookish child–that at the end of certain selling seasons, the clerks would tear the covers off the books and magazines (and comic books!) and send them (the covers) back to the publishers for credit, and throw the actual reading materials into the trash bin in the back room.

On trash day, they’d be hauled away to the dump by Mel Houser, Nelson’s trash man. The first time I discovered a pile of coverless books in the trash bin, I wanted to cry. I couldn’t believe all those sad, pathetic ruined books and magazines. It seemed such a waste! But then, when my dad said that I could have as many coverless books and magazines and comic books that I could dig out of the trash bin and carry home, I dried my tears and went to work. Digging. 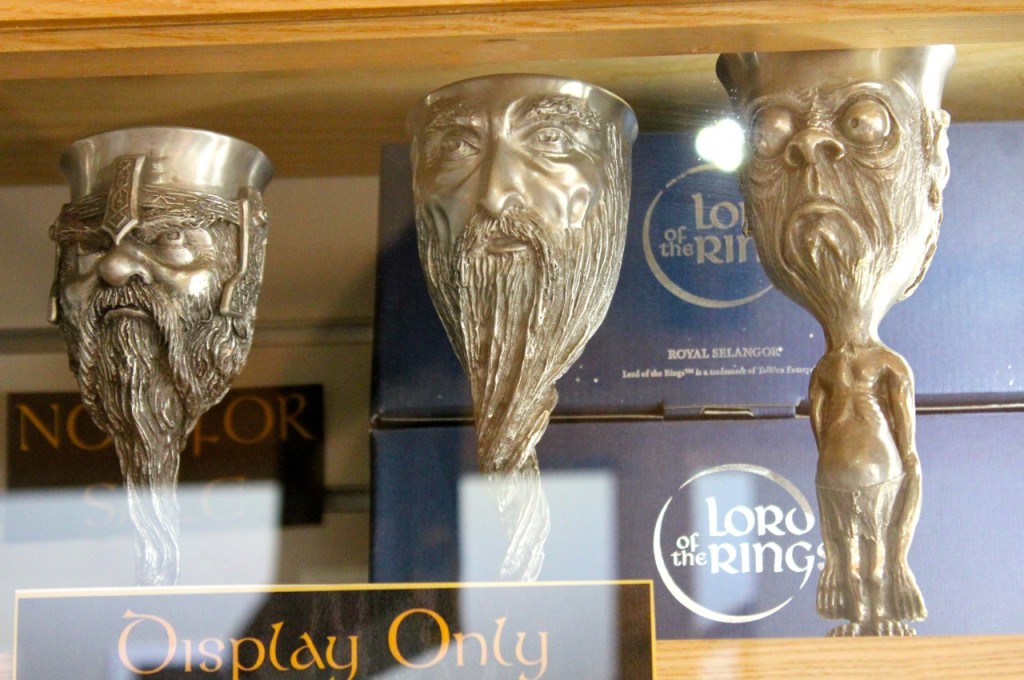 These wonderful goblets were on display in the gift shop.

So, my enormous library in my little girlhood bedroom was made up largely of paperback books with no covers. I can still remember many of the titles that I read first from those trash bin books: Kon Tiki by Thor Heyerdahl, The Good Earth by Pearl S. Buck, Les Miserables by Victor Hugo, A Tale of Two Cities by Charles Dickens, Old Man and the Sea by Earnest Hemingway, and The Hobbit by J.R.R. Tolkien, among others. I’d drag the books home by the armload, arrange them on my shelves, pick out one to read, get a snack (one must do these things in the proper order, eh?) and quietly shut the door to my room.

Then I’d sit down to read. Not bad for a junior high student, eh? I have no doubt that those armloads of purloined treasure, coverless books from my Dad’s trash bin, helped shape my own reading and writing tastes to this day. I also loved the fact that Bilbo–though he clearly, clearly would rather have stayed at home, where it was cozy and safe–could, and did, gird his loins to go on an adventure–for a compelling cause–even though it was way out of his comfort zone. 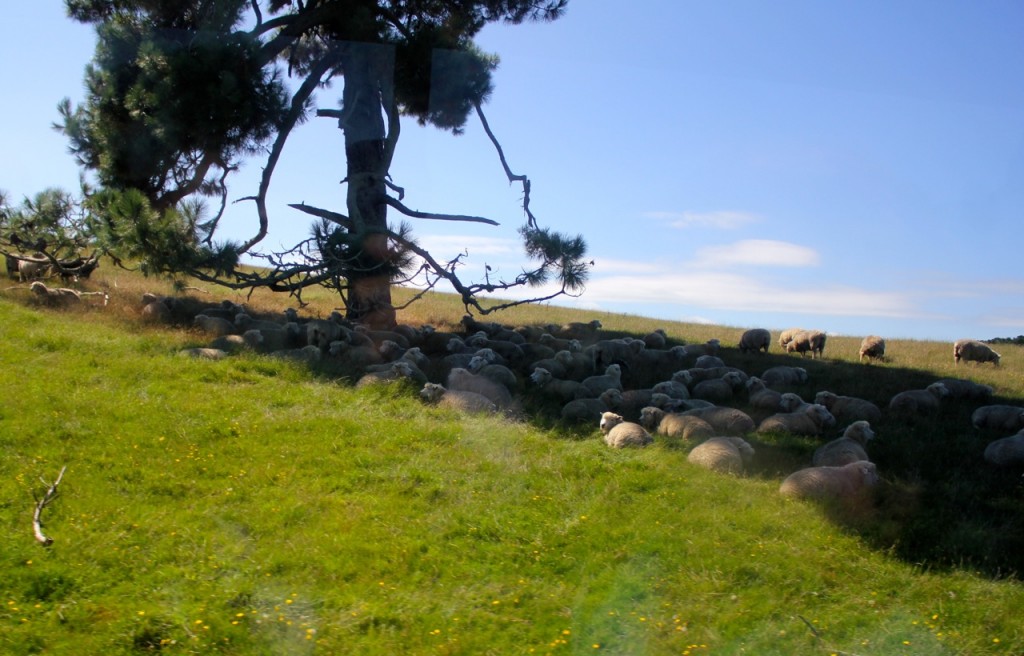 Lots of sheep are still raised on the farm where Hobbiton was built.

“‘I am looking for someone to share in an adventure that I am arranging, and it’s very difficult to find anyone.’
‘I should think so — in these parts! We are plain quiet folk and have no use for adventures. Nasty disturbing uncomfortable things! Make you late for dinner!” –Tolkien, The Hobbit 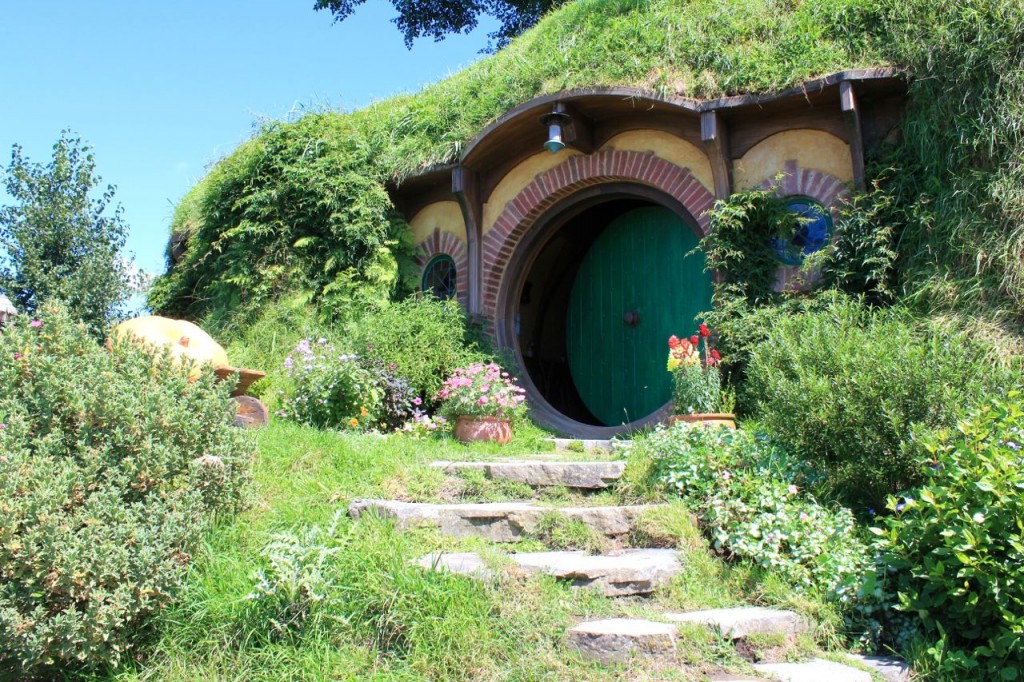 “In a hole in the ground lived a Hobbit . . . And not a nasty, dirty, wet hole full of worms and oozy smells. This was a Hobbit hole. And that means good food, a warm hearth… and all the comforts of home.” The first time we visited New Zealand, five years ago, we didn’t visit the Hobbiton movie set, though we really wanted to. We were on the slimmest of shoestring budgets, and it’s not cheap to visit this popular attraction. But we were determined to make a visit happen this time. It was totally worth the effort to get there. This location is the largest “green set” in the world. It is, of course, where many scenes from the movie version of “The Hobbit” were filmed. 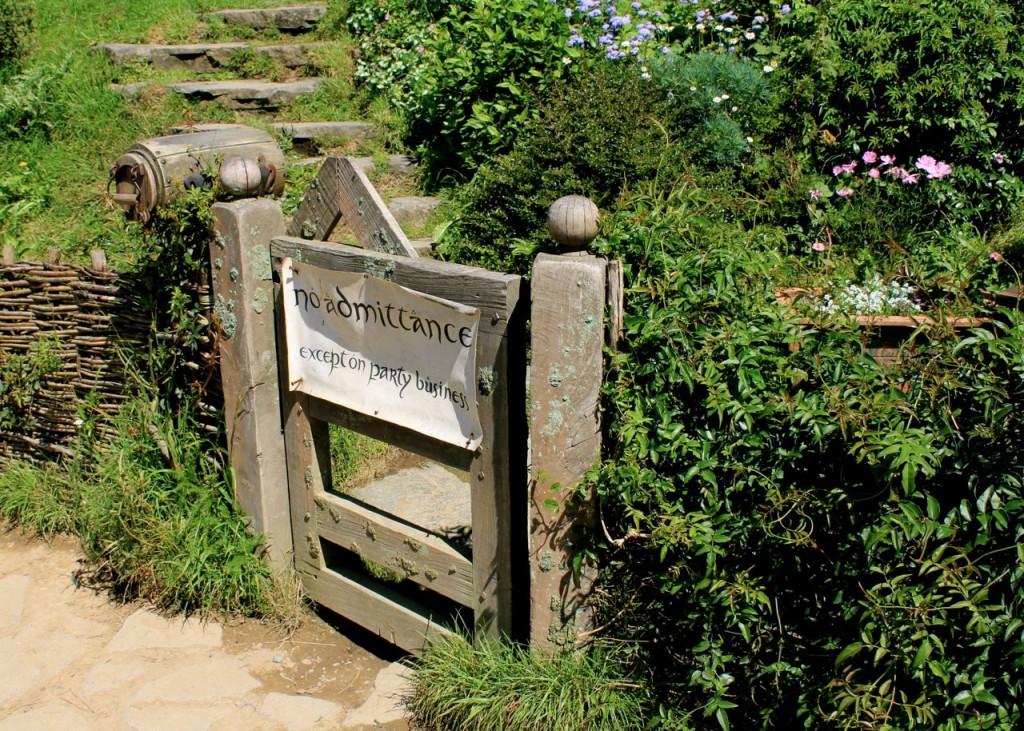 Peter Jackson, the director of The Lord of the Rings film series, actually spotted the Alexander Farm–a 1200-acre livestock ranch, made up of perfect grassy rolling hills, dotted with sheep–during an aerial search in 1998, and decided that the area was “like a slice of ancient England”. Alan Lee, the set director, said that the location’s hills “looked as though Hobbits had already begun excavations.”

I personally think it looks more like a slice of heaven. It’s just unbelievably pretty, but most of New Zealand seems to be that way. Each tour bus has a name. 🙂 Ours was Dwalin. Nearly 1,000 people visit this site every day, and the tours run like a well-oiled machine.

The New Zealand army agreed to bring in heavy equipment to make about a mile’s worth of road into the site from the nearest highway, and also to do initial earth moving. The tour guide explained to us that they were trying to keep the movie set a secret from the folks who lived in the area, so they said that the army was doing practice maneuvers in the area. That wouldn’t have satisfied me. They catered to 400 people a day, after all, during the set-building and filming–that’s a lot of traffic for such a bucolic, rural area! I suspect the folks who lived around probably knew something else was afoot. 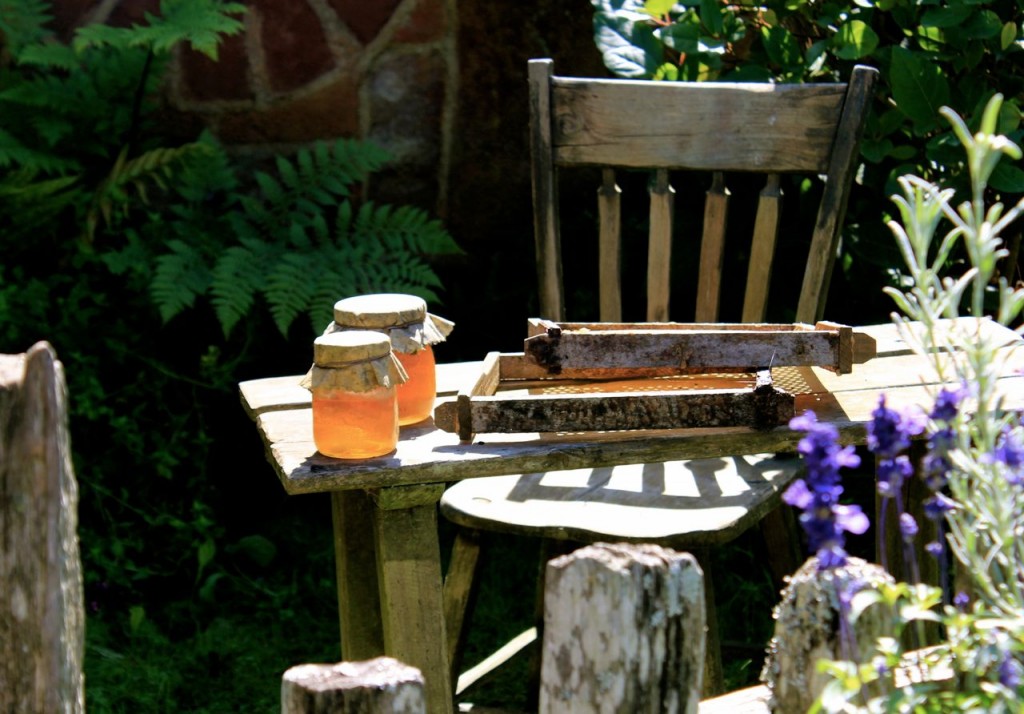 Each Hobbit hole is designed to belong to a particular Hobbit: these pictures, for example, are from the home of the beekeeper. 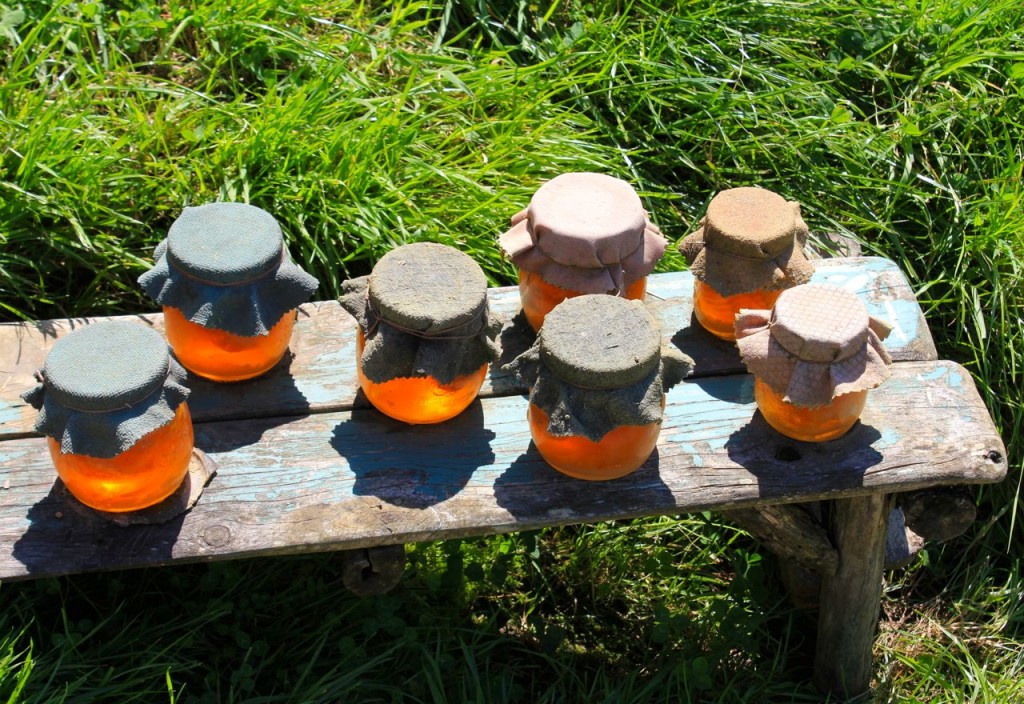 “There is more in you of good than you know, child of the kindly West. Some courage and some wisdom, blended in measure. If more of us valued food and cheer and song above hoarded gold, it would be a merrier world.” –Tolkien, The Hobbit Many realistic details, like tiny clothes hung out on laundry lines, delighted me.

If all this activity had been happening in our neighborhood in Nebraska, I suspect that my neighbors and I would have been pretty nervous and suspicious, too. Maybe the Kiwis are a bit more trusting of the Powers That Be than we are, though. 😉 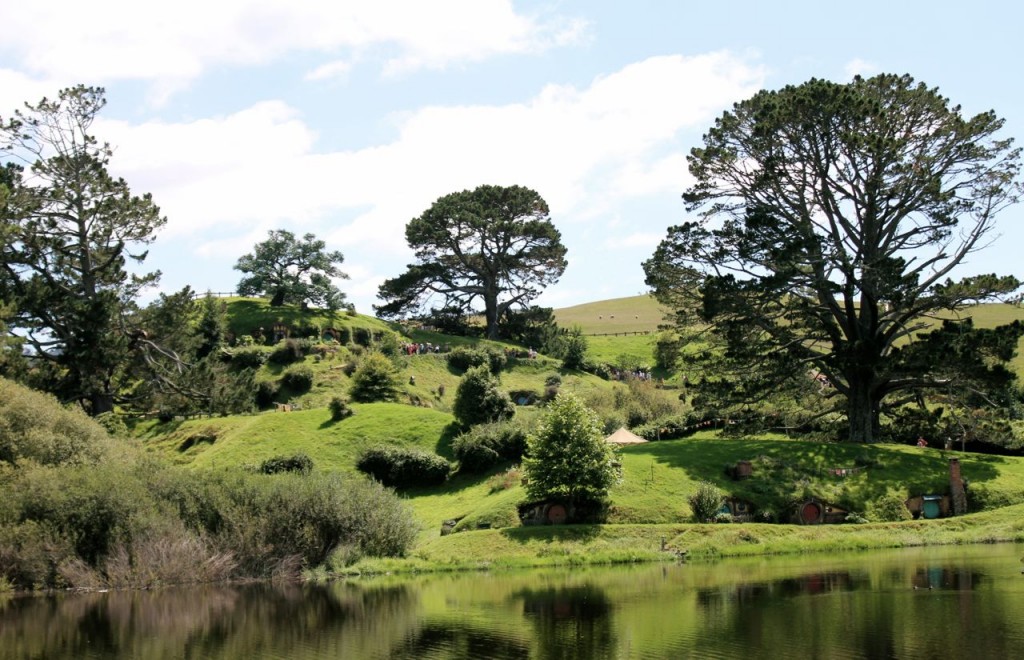 You have to look carefully to see hobbit holes at the top left of the photo, and down at the lakeside, bottom right. The large tree on the right is the Party Tree, with the party grounds to the left of it. 🙂

The set builders built facades for 37 hobbit holes (there have been a few added since, making the total of 44), gardens, hedges, a mill with a working water wheel, a double arch bridge, and the Green Dragon Tavern (which is awesome). Also they erected a 29-ton oak tree above Bag End that originally had been growing near the nearby town of Matamata, and which was cut down and re-assembled on site, complete with tens of thousands of artificial leaves. I like this: (sustainable!) the thatch roofs on the pub and mill were made from rushes growing on the farm. Some of the farm’s sheep graze nearby, although this is carefully monitored: the farm raises a vast number of sheep, and without judicious use of fencing, the vegetable gardens and the flower gardens too would probably be in the bellies of the farm’s sheep flocks. I usually avoid touristy sites, but I was blown away by this place. I loved the gardens–they are real, productive gardens and orchards, with fruit and veg and lots of giant pumpkins growing–and the flower beds, which are beautiful but also a little wild, just as I keep mine 🙂 (Intentionally, *cough*) and as I would imagine Hobbits would keep theirs, too. No neat, tidy use of lava rock or mulch cloth in these beds, oh no. Each Hobbit hole has a distinct personality and detailing. It wouldn’t have taken me by surprise if a Hobbit would have ambled out of any of those doors at any time during our tour. “Then something Tookish woke up inside him, and he wished to go and see the great mountains, and hear the pine-trees and the waterfalls, and explore the caves, and wear a sword instead of a walking-stick.” –Tolkien, The Hobbit Jackson wrote: “I knew Hobbiton needed to be warm, comfortable and feel lived in. By letting the weeds grow through the cracks and establishing hedges and little gardens a year before filming, we ended up with an incredibly real place, not just a film set”. Lee commented that “it was satisfying to see that it had taken on something of the look of the Devonshire countryside I’d lived in for the past twenty-five years”. “It’s a dangerous business, Frodo, going out your door. You step onto the road, and if you don’t keep your feet, there’s no knowing where you might be swept off to.” –Tolkien, The Hobbit

At the end of our tour, which took about two hours, we were treated to a cold drink at the Green Dragon. Ginger beer–perfect! The Green Dragon tavern was a beautiful place, inside and outside.

“It does not do to leave a live dragon out of your calculations, if you live near him.” ―Tolkien, The Hobbit Hobbits, of course, are big into parties. This area is all gussied up for a party.

Have you treated yourself to a read of Tolkien’s book The Hobbit yet? Gosh, pick up a copy today and see what the fuss is all about. All this excitement about the Hobbiton Movie Set and the excellent Peter Jackson movies started out, after all, in the imagination of J.R.R. Tolkien.

They are a treat.

Thanks for popping in, Gentle Reader. You can find out more information about the Hobbiton Movie Set right here, and I’ll join the chorus to encourage you to make a trip, if you can do so. It’s definitely worth the effort to go!

“May the wind under your wings bear you where the sun sails and the moon walks.” ― J.R.R. Tolkien, The Hobbit

15 thoughts on “All it’s cracked up to be: a visit to the Shire, an afternoon at Hobbiton”