Frog eye salad is a dessert salad that shows up at nearly every one of our family gatherings. If it’s not there, there’s a pretty good/weird/confusing reason why not. Here’s the best frog eye salad recipe, and a couple of possible/probable? origin stories. 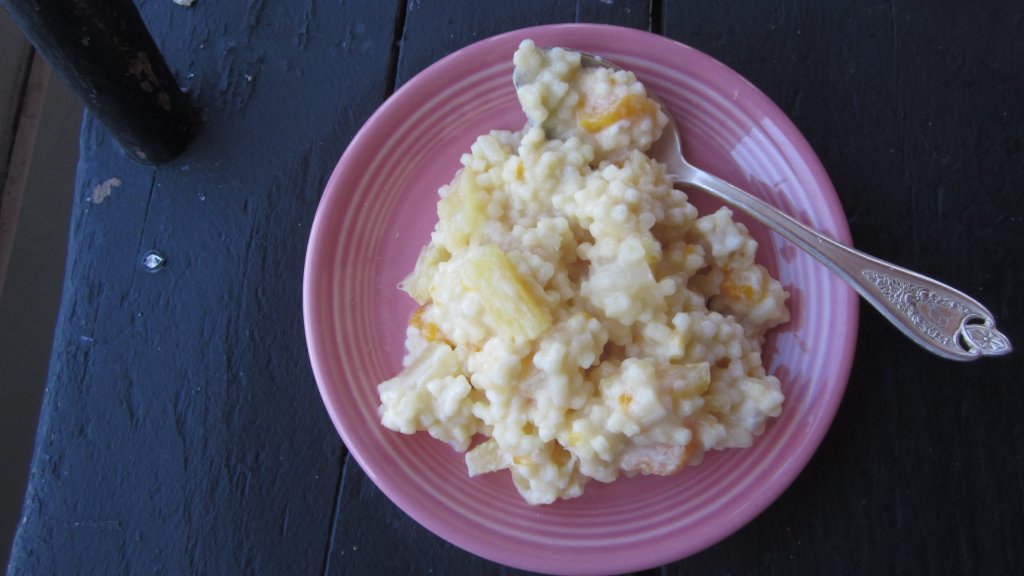 Can’t you just feel this in your mouth . . . so creamy and pebbly? and frog-eyed? Yummmmm.

Frog Eye Salad and the typical Young’s Longing for Glory

At nearly every major holiday, my family gets together and enjoys a glorious meal. We’re all enthusiastic cooks and also rather (good-natured, mostly) competitive where “glory dishes” are concerned. (Or, perhaps more accurately, “seeking the most attention” dishes.)

What’s a glory dish? The dish that gets the most oohs and aahhs, of course. Usually there are several that compete for this honor. The cook or baker gets to blush with pleasure as eaters enthusiastically call her out.

One Easter in particular, my little sis Mollie earned the most glory points. Not only did she bring buttery bunny-rabbit rolls (extra points because they were still warm), she also brought a beautiful quadruple-layer chocolate cake with a rich, fudgy frosting and (another bonus!) creamy filling as well.

Yes, Moll made two winning contributions to the Easter dinner that year. Not bad for the baby sister. She’s a savvy cook actually and deserved all the oohs, ahhs and cries of delight that resulted.

I don’t remember what I brought that day, but obviously it wasn’t as superlative as a quadruple chocolate cake or buttery bunny rolls. Probably a forgettable plate of tired celery sticks. Or a big jar of pickles, room temperature. I don’t remember and I can guarantee you that nobody else did, either.

It wasn’t my turn to shine. Clearly.

Why does the Frog Eye Salad always steal the show?

However. It is always curious to me that no matter what delicacies anybody else brings to a Young family feast, the Frog Eye Salad that my sister Anne brings always steals the show.

I can imagine three possible reasons for this phenom, to wit:

Like everything else that my sister Anne does, this is her very best effort, the best Frog Eye Salad recipe that she has come up with, after tweaking the recipe for years.

Are you ready for the recipe?

But wait! We were going to talk origin story, first, weren’t we? After all. A salad called a peculiar name such as Frog Eye Salad has to have a good story behind, am I right? Of course I am.

So without any further preamble, let’s examine a couple of origin stories that I ran across on the interwebs. Or someplace.

Once upon a time, long ago, an impoverished mother sent her two young sons out into the woods to find something for the family to eat. (The bone-idle father of the family had absconded months earlier with the family egg money, and hadn’t been heard from since.)

The brothers settled in to fish at a local fishing hole. Times were hard, and folks in the area already had pulled most of the fish out of the pond.

One of the boys, however, actually snagged a very large bullfrog. Minutes later, the other brother did the same. It seemed that the pond–devoid of fish–was teeming with bullfrogs. The two hadn’t ever eaten frogs before, but since they were starving and had been taught by their mother not to waste a thing, they built a quick wood fire and roasted the frogs.

The two discovered that the legs were particularly delicious, and they happily spent the rest of the day catching frogs for the family’s dinner. When the boys presented to their mother a large mess of frogs that evening, with the boys’ assurances that the legs were delicious roasted, she went to work. She quickly had the frogs cleaned and the legs roasting on the fire, but she couldn’t stand the thought of wasting all the eyeballs.

Thrift had been ingrained into the good woman at an early age, ingrained very deeply indeed. So she boiled up the eyeballs and chilled them in the icebox, as she wondered what she could do with them.

An idea came to her the next day, and she mixed the cooled eyeballs with fruit, a dab of whipped cream, and a few other things that sounded good to her from the icebox, and Frog Eye Salad was born.

The family’s fortunes changed that day. The humble housewife earned all the glory that was due her, and as the inventor of Frog Eye Salad, she was given the honor of riding on the largest float in all the town parades from that day forward, and the mayor gave her the key to the village. ⇐ The End ⇒

p.s. The nature of frog eye salad changed course over the decades, and now contains no actual frog eyeballs. **the actual end**

Probable? Possible? Hmm. It causes one to wonder.

Question #1: Frog Eye Salad: what the heck is it?*

I’m always surprised when I mention this splendid salad, and get, in return, blank stares of non-comprehension and the inevitable question “What the heck is it?” Quite often the question is followed by this one: “Does it really contain frog eyes?”

Usually I launch into the story that I recounted above, causing much confusion, of course, and skepticism. Why are people so skeptical these days, I wonder? 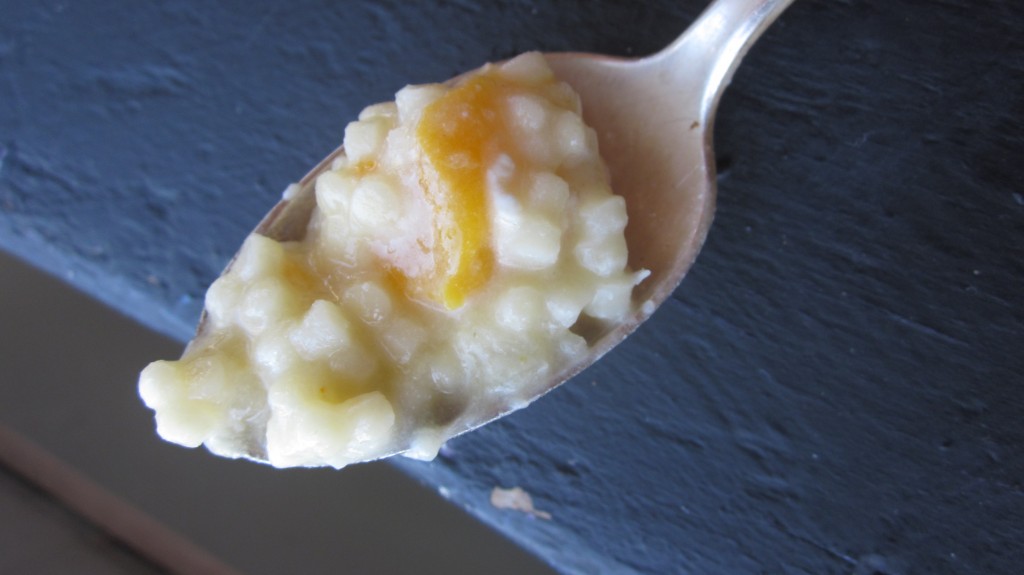 I’m not making this one up. Not that I made up the one above, I just thought I’d put that out there, first thing. This salad reportedly has Mormon roots. At least it was very popular in Mormon circles, primarily in Utah and Idaho.

A Mormon woman with twenty-two children was very busily working in her kitchen, preparing the family Easter feast. Thirty two cousins and all their children were coming for dinner, and my goodness did she have a lot on her plate.

The good woman was in the process of making twenty-two pies and twelve dozen bunny-shaped yeast rolls in the summer kitchen. AND a four-layer chocolate cake was cooling in the pantry.

All at once it occurred to her: The Salad! She had forgotten to make a salad! Her oldest daughter was watching the goose that was roasting in the oven, her hubby was feeding the wood fires to keep everything cooking, and several of her other children were attending to setting the table, arranging pickle trays, sampling the warm buns that she had put out onto the countertop, etc.

But the salad: how could she have forgotten? She grabbed the arm of one of her daughters as she hurried past. “Amalia!” she cried. “Please help mama out and go make a salad. The icebox is packed with plenty of greens from the garden.”

Amalia was a good girl and she went straight to the icebox, and started digging for salad greens.

Little did she know that her little brother–a staunch hater of all green foods–had earlier that day fed every green thing he could find to the family’s stinky goat, as a kind of pay-back for the goat being a stinky pain that day. Amalia loved her little brother, despite the goat incident, and she knew that he would be “sent to the woodshed” if her father found out about it. She determined then to quickly and quietly make a salad out of something else–anything else!

So the creative lass pulled leftover fruit cocktail, eggs, whipped cream and some leftover pasta (that she quickly chopped up into little pebbles) out of the icebox, and whipped it all up together. She tasted it, then tasted it again.

Though she couldn’t decide *what the heck it was, it didn’t matter. The 32 cousins and all their multitudinous children had arrived, and it was time to serve dinner. She put the–whatever the heck it was–into a pretty bowl, hoping that her mother wouldn’t notice that it had not even a hint of green in it, and placed it on the table. At the last minute, she stirred in a couple handfuls of mini marshmallows into it. For good measure.

The–whatever the heck it was–was embraced fondly by all the cousins, the children, and there wasn’t even a morsel left to toss to the stinky goat. The salad later earned the nickname “Frog Eye Salad” because of the texture of the chopped up pasta noodles, and it became locally famous among the Mormon community.

The father was never the wiser about the loss of the greens, but the goat developed an annoying taste for greens and the mother had to fence the garden off from him. ♥ The end ♥

Frog Eye Salad is silky and fruity and feels so good on the tongue, and it tastes especially good the day after your feast, so you really should make a very large batch of it so there are leftovers, which you will have to squirrel away in the farthest reaches of the ‘fridge so your large teenaged son doesn’t snarf it all down first.

Ask me how I know this.

Gentle reader, trust me and if you’ve never made Frog Eye Salad, make it so you’ll know what I’m talking about. My words cannot quite do it justice, I’m certain of that. And, for the record, it’s not even that hard to make.

Try it–it may just become a family favorite and it may earn you the glory points too! 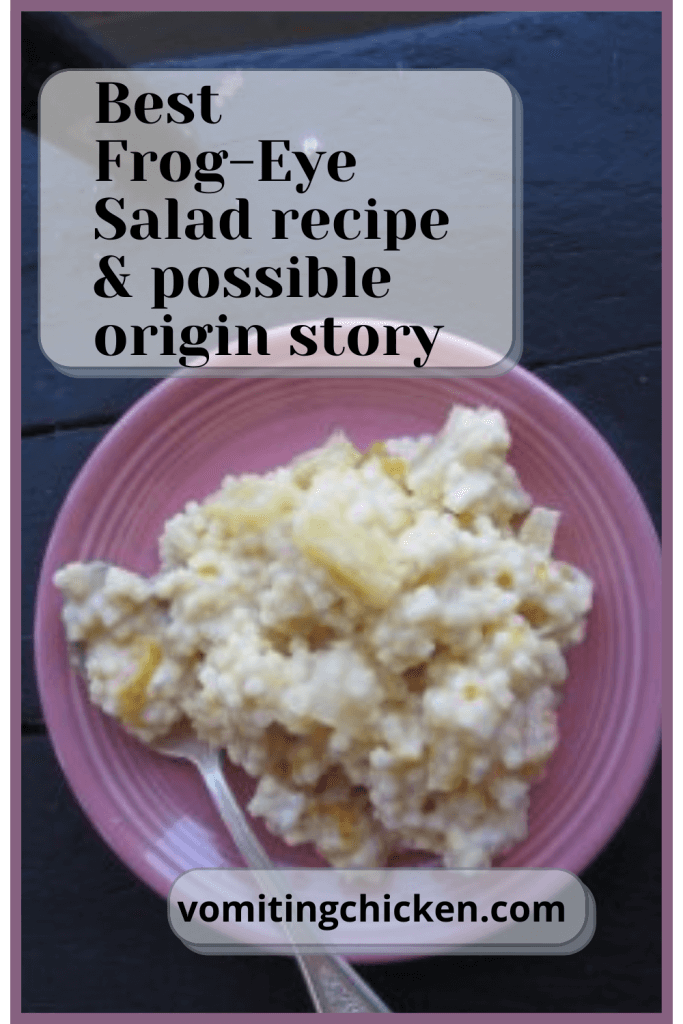 Thank you popping in, my friend!

I’d love it if you comment below and let me know if you tried this recipe, and if so, what you thought of it!

big *hugs* until next time!