I’ll show you how to make this Turkish breakfast porridge recipe quickly–maybe even in 5 minutes!–by doing a little prep the night before.

“A hot breakfast will make you smarter.”

Okay, okay, a little confession first: I’m including this recipe in my 5-minute breakfast missions, but it will actually take longer than that to make. I would say 5 minutes “hands on” time might be accurate, but it may even take a bit longer than that. BUT it’s such a delicious breakfast that I’m including it, anyway. Call me overly optimistic, call me a low-down filthy liar, just call me. And try making this porridge. You’ll love it. 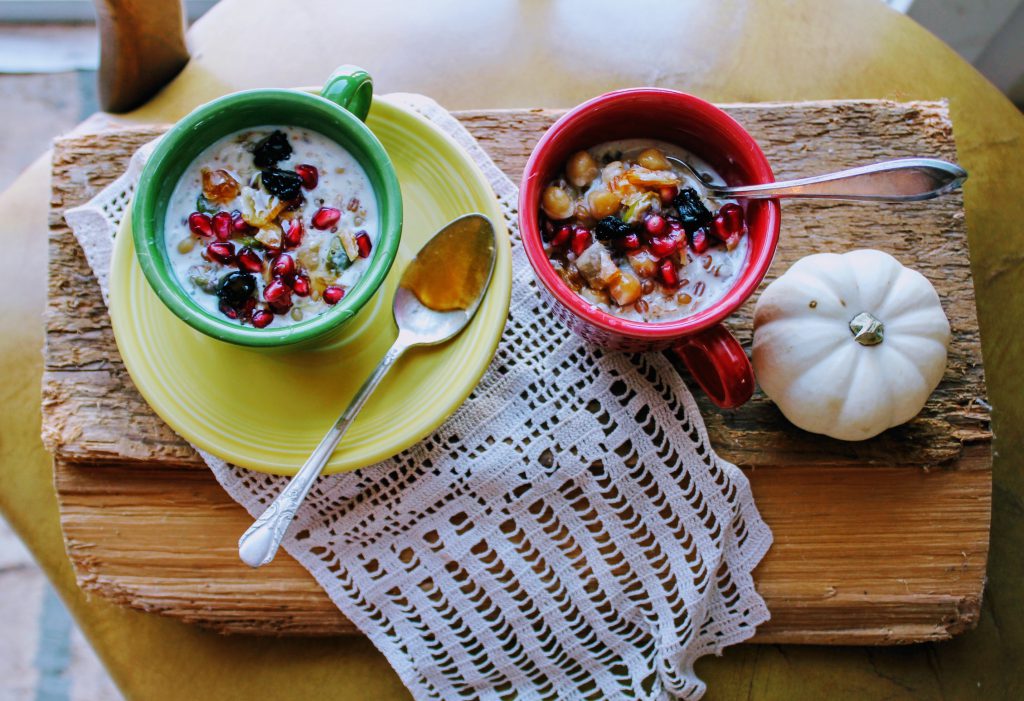 Turkish breakfast porridge makes a delightful breakfast and even a good lunch!

What is it about hot breakfast, anyway, Mom?

I remember when I was a girl, slipping quickly down the back stairs to our kitchen in the Nelson house; the stairs were very steep and made of dark polished wood (purportedly intended to be the servants’ stairs when the house was built) and I fell down them more times than I’d like to admit. As quietly as I could, I’d push the back door open and start to slip out . . . (I’m always late these days; I was always late when I was in high school, too)–only to hear Mom call “Amy, come get some breakfast, quick, before you head to school!”

No weak protestations on my part, of being late to band practice or needing to get to school early, would do.

Mom knew I’d do better in school if I had something hot and nutritious in my stomach. Knowing from experience that there was no use arguing, I’d turn the corner into the kitchen and ease quickly into the red wicker couch that was pushed up against our kitchen table. I’d tuck into the French toast with syrup, melting butter, and a dusting of confectioner’s sugar (Mom never skimps on the good stuff, thank goodness) that Mom would slide in front of me. Steaming pancakes with applesauce, or scrambled eggs and sausages. Swedish pancakes with cottage cheese and maple syrup.

Oh my goodness! We were lucky kids, weren’t we?

It was the week before Christmas

. . . and the kids and I were doing some grouchy panic-cleaning (let’s be honest once). I sat down for a moment to open the mail, intending to give myself a 5-minute break from the loathsome job of cleaning my house. (You know how dirty a house gets when you burn wood daily, keep animals in the house, and continually remodel the kitchen? Pretty doggone dirty, that’s what). I set the timer for 5 minutes, picked up a new cookbook that I hadn’t had a chance to look at, and leafed through it despondently.

I didn’t realize at first how immediately I was going to be craving the spicy flavors and rich sauces of Turkish foods. OH great, like that was going to happen! I had a big ole’ dirty house to clean! I certainly didn’t have time to monkey around with new recipes . . . did I? . . .

Transported back to that Turkish restaurant

As a matter of fact, one of our favorite places to eat while we were in New Zealand nearly a year ago was at a friendly little neighborhood Turkish restaurant. Amalia and I had, between ecstatic murmurs of delight, analyzed the dishes every time we ate there. We are both, after all, passable cooks and even co-authors of a very popular e-cookbook. My daughter and I agreed that, with the proper recipes, surely we could recreate much of what we liked about this glorious and delectable cuisine.

We never ate breakfast at the restaurant, sadly, so I’ll just have to wonder if they had a fabulous Turkish breakfast porridge on the menu. (OR GO BACK, yes, that’s what we ought to do!) 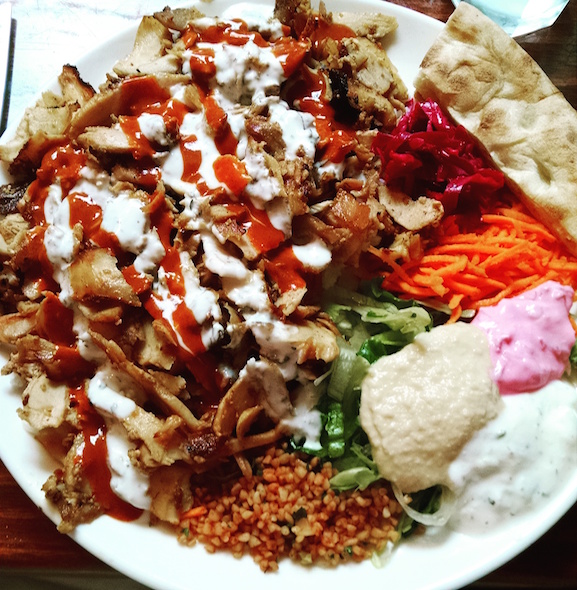 Is your mouth watering, too? This was the typical meal that Amalia and I shared at the Turkish restaurant in New Zealand. I think this one was chicken-based.

Aaaaaand if we could coax a few swarthy and charming young Turks to serve it, then . . . well. 🙂 Life would be nearly too good to be true.

Why on earth were we cleaning? you may ask. And how astute of you to do just that.

The kids were coming for Christmas at the end of the week–all of them, huzzah!!–and our house, after several hours of cleaning, was . . . erm . . . only passably tidy. I had a choice to make: spend the rest of the available time polishing, dusting, and rearranging, or–as I turned cookbook pages faster and faster–be happy with it as it was, and focus on the food.

Was little Mack correct in his assertion–his very strongly-held and loudly-voiced assertion!–that nobody cared a blessed fig if there was a pile of clean laundry heaped in the living room, apparently never to be put away, but to be pawed through with reckless abandonment, when one needed a fresh pair of underpants?

He continued to urge me to listen to reason.

“Mom! . . . I read in “Popular Science”  that it’s vitally important for kids to be exposed to dust and dirt . . . and filth! You are robbing your children and grandchildren of this gift–to bolster their immune systems–every time you sweep and vacuum–or worse, make me do it!! Mom, think about it! Do you really want me to have chronic asthma??” he sputtered, coughing in his passion (ironically).

I decided he had, after, at least a modicum of a point. I realized–tiredly–that his arguments, of course, were rooted in selfishness, as he hates to clean house as much as his poor mother does.

(Alas! What are the odds of raising SIX CHILDREN who hate to clean as much as I do???). 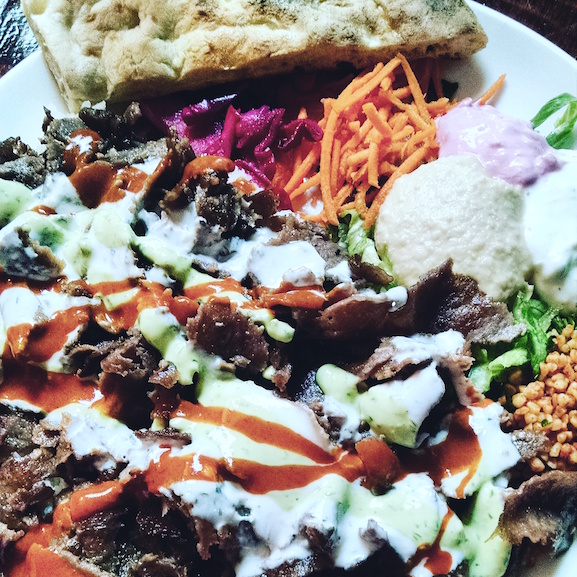 I think this one was spiced lamb. Yummmm. *waves of longing*

But he was right that it didn’t matter all that much just how clean the house was.

I knew that, all things considered, what really mattered to our foodie bunch, was the food. That’s where I should be throwing my limited energies, I realized, with startling clarity! If Mack was just a tiny iota misguided–surely the kids would forgive me the house being a disaster, if the food was impressive enough!

And anybody who knows me, knows this: I’d a hundred thousand million bajillion squijamarillion times rather be cooking and baking, then cleaning.

So. Where we were? Back to the new cookbook! I settled in with a legal pad and a pen, and a hot cuppa tea, and enjoyed the process of planning The Most Wonderful Christmas Menu Ever. BUT. The caveat was, of course, that I could prepare as much as possible beforehand, so I could spend as much time as I could with my darling children and my adorable grandies. Natch’.

I actually read and review a lot of cookbooks. A new cookbook is very often my reading material of choice in the after-dinner hours.

Click here to get your own copy. You won’t be sorry! (affiliate link)

I settled in deeper to my chair and wiped the drool off my chin. I was formulating A Plan.

This cookbook is something special. I spent quite a happy hour planning grocery lists and cooking schedules.  I decided to make Chicken Shawarma with Garlic Sauce and Greens for Christmas dinner. A Middle Eastern-themed menu, that was perfect! Let’s see . . . I could make a special breakfast first–Raspberry-Rose Petal Turnovers, with Shakshuka (Baked Eggs with Spicy Tomato Sauce) would be great for starters, and of course a second breakfast of the fabulous-looking Asure (Grain Pudding) . . . or a fabulous-looking multi-grained Turkish breakfast porridge recipe, would be super-easy to have cooked ahead of time, and just re-heat on Christmas morning.

But then. I did two dumb things the week before Christmas. I got bit by a spider (a black widow), which slowed me down quite a bit, hobbled me with pain and self-pity, too. Secondly, while moving a folded-up ping-pong table, it broke in half and fell on the middle of my foot, (apparently) cracking a bone in the top of my foot. Causing even more pain and self-pity. As it would.

You know what I did? I changed all my plans, and instead made very simple meals, things that I could whip up without moving too quickly (*wince*) or consulting a recipe book. 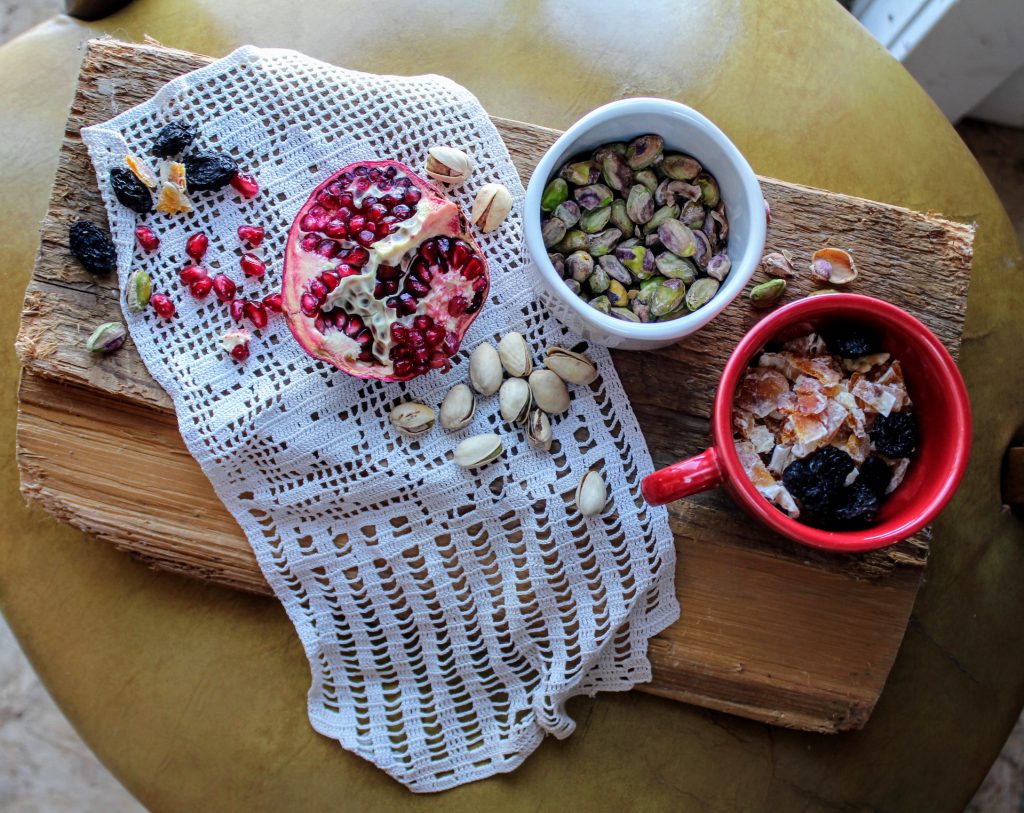 Here are the add-ins that I used. You can get really creative with your own, adding any number of seeds, nuts, fruits, etc., that will please you and yours!

The house was still a little dirty, too, so there’s that. Sometimes, life steps in and you must change plans. You may indulge in self-pity, just for a minute or two, but then you’ve got to give that pleasure up, too.

I did make the Turkish breakfast porridge recipe–

–and it was a fabulous hit! And now that Christmas is past, and I’ve healed up from my pre-Christmas injuries (more or less), I am tackling some other Turkish recipes that had taken ahold of my imagination and my appetite.

The only challenge I have with this cookbook is that there are probably not many recipes that wouldn’t necessitate a quick trip to the store, for me, at least, living here in the lovely middle of nowhere. But it’s Middle-Eastern cooking, right? So that’s not so surprising.

It’s time. Time to make this Turkish breakfast porridge loosely based on the recipe in the cookbook. I did have to change some things, because I didn’t have all the ingredients in the original recipe, but I don’t think the recipe has suffered one whit. It’s delicious. And beautiful. You might consider putting it on your next company breakfast menu, or just whip it up for your dear ones tomorrow. Or tonight.

Turkish Breakfast Porridge: because a hot breakfast will make you smarter.
Recipe Type: inspired by Soframiz by Sortun & Kilpatrick
Cuisine: Middle Eastern
Author: Amy from vomitingchicken.com
Prep time: 20 mins
Cook time: 90 mins
Total time: 1 hour 50 mins
Serves: 6
Oh, the joys of waking up in the morning to smell something hot and delicious cooking just for you! The grains of this marvelous varied breakfast porridge can be cooked ahead of time, so you don’t have to get up too awfully early to cook this for your family. You won’t regret the time and attention that it takes to make it. It’s beautiful and tasty, and (I promise) it makes you smarter. AND you can have fun tossing on lots of dried fruit, tasty nuts and other lovely things.
Ingredients
Instructions
3.5.3251

And hey, if you think your friends are relations might enjoy this post, would you mind sharing it with them? I would appreciate it sooo much!