In all the hoopla about backyard chickens–and that hoopla is well-earned, I think, because having a few  chickens in your backyard is a great idea–oftentimes we forget . . . the humble goose.

I have a goose. She is a blessing to our place. But perhaps we take her for granted. Maybe she needs a special day of her own, now and again. Ergo: today, this tiny corner of the internet is devoted to Lucy, our goose. 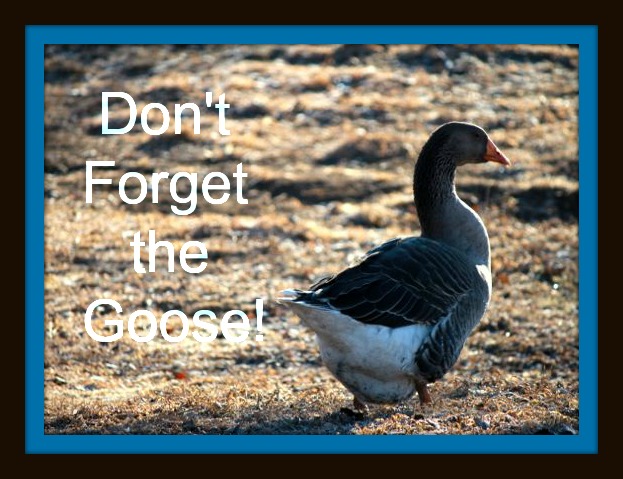 It’s Goose Story Time, my Gentle Readers, and no chickens will be mentioned in this post. At least, not many. Here goes:

My dad and my sister Anne surprised me one year with a pair of goslings for my birthday. They were the softest, silkiest, most adorable things I’d ever seen. I kept them in a big box in the house for as long as possible, with a dishpan full of water that they could splash in, and a heat lamp to keep them warm. They bonded to me immediately, and every time they saw me, they’d cry out to me. If I lifted them out of their box, they would follow me around the house. They were downy and soft and an unusual yellow-green color, and would make a whispering, peeping sound. They were incredibly sweet.

Eventually they grew large enough that they needed to be outside. The amusing sweetness of having goslings follow me around the house was soon trumped by the (cough) unpleasantness of cleaning up after them. We have a little house outside that Bryan had built for our ducks, not too far uphill from our pond. We had some ducks at the time, so I hoped that the half-grown goslings would pal around with the duck flock. Which they did. 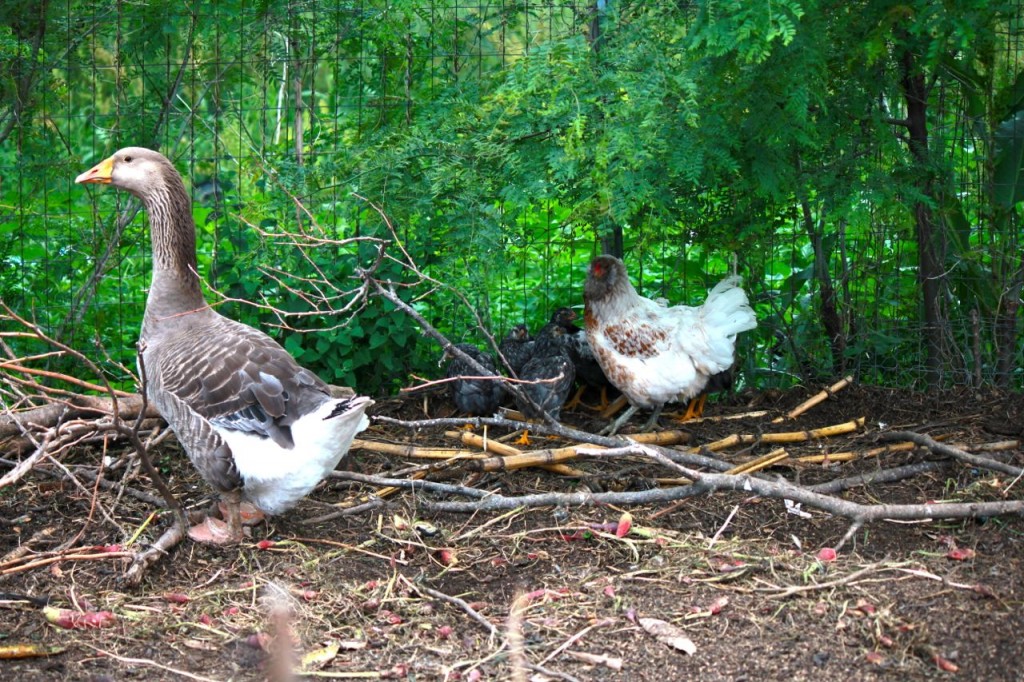 So, I fibbed about the “no chickens.” 😉 Last summer, Lucy attached herself to a mama hen who had hatched out some chicks, and she watched over them all as if they were her own family.

The two goslings would still come running to me, whenever I went outside, but for the most part they’d hang out with their duck cousins, paddling around in the pond during the day and returning to the safety of the Duck House at night. But then, disaster: during a thunderstorm one night, I went out to shut the ducks and goslings in for the night and discovered that one of the goslings was missing.

When separated from each other, the goslings would peep very loudly until they were re-united again. So I knew the best way to find the missing one, if, indeed, it was findable. 🙁 I picked up the remaining gosling and carried him around our place, thunder rumbling and lightning crashing about me, while he peeped piteously away.

There was no answer from the missing little one. I bawled like a baby. I stayed outside in that thunderstorm as long as my nerves could stand it, because I didn’t want the fam to see that I was sobbing over a lost gosling. (They already think I’m crackers, go figure.) The second gosling must have been snatched by a predator and carried away. There was no trace of him. I tucked the first gosling into the duck house with the ducks, shut the door to his frantic peeping, and went inside my own house to bed.

If you keep animals of any kind, of course, there are times where your heart gets broken. This was one of those times, for me. Whenever I’d step outside, that lonesome gosling would make a beeline for me. He missed his sister, and it was a sorry thing to see him walking around our yard, peeping and searching. . .

But then: a God thing, I just know it. Out of the blue, a friend of mine who kept a large flock of chickens and ducks and geese, called. He had a single little gosling that hatched apart from the others, and he was looking for a place for it–was I interested–?

I dropped what I was doing, drove to his farm, and was delighted to accept not only a little gosling from him (this, our goose Lucy) but also a few bantam chicks, too, to keep her company. So we kept Lucy and the little bantams in the house as long as they needed to be, under a heat lamp, and then when they were a bit larger, I moved them out into the “nursery” of the chicken coop, where they did some more growing up. Eventually Lucy met and fell in love with our other gosling, the lonesome male, whom we had named Seamus.

Seamus and Lucy were a charming couple. Seamus was an African goose, and Lucy was a Toulouse. Lucy started laying eggs, and when she finally found a spot where our dog Bea couldn’t get at her eggs, she was successful at hatching out a clutch of babies. Oh, Gentle Reader. It was a sight to see this family together. Seamus and Lucy were excellent parents, and they needed absolutely no help from me to keep their adorable fluffy goslings safe. When the babies were large enough, we sold them all (I believe in the old saw–that I made up, mind you–that while two geese are charming, seven geese are Too Many Geese Altogether) and enjoyed a quieter barnyard for awhile. Then Lucy hatched out one–only one!–little gosling, and we enjoyed watching the two be parents, again.

We named that gosling “Blossom,” and we kept her, since three geese, we found out, were not too many geese at all.

Unfortunately one night, Seamus came to an untimely end, and then Blossom, too–she was actually sitting on eggs underneath our back porch, but the drought year and the year of the Dreaded Varmint came . . . and he–that Dreaded Varmint–got her. We were heart broken, and apparently Lucy was too, but not only that–she was practical. She moved back into the chicken coop, and there she stayed. She instinctively knew (and she was right) that the chicken coop was a safer place to be than the duck coop, or under the back porch. Some drawings I made one morning, when I discovered poor Lucy stuck in the chickens’ heated bucket. I dumped her out right away, of course, but I did the drawings to show the kids what it had looked like.

Lucy has been keeping company with our chickens ever since. She is a pleasant addition to our chicken flock. She only asks that I keep a fresh bucket of water for her every day, to wash her face in. When it’s warmer, she’ll take daily forays down to the pond, for bathing and splashing about in, but she’ll return to the coop for safety at night, all on her own.

A few days ago, I had my camera out in the chicken yard, taking photos for my Chicken Sprouts post and I heard some splashing about behind me. There was Lucy, only a few feet from me, doing her morning washing in the bucket of fresh water I had put out. I was so happy to have my camera on me, and I took a few pictures.

Today marks the day when The Goose is Not Forgotten.

So, on this day, the goose is not forgotten. Take a gander (sorry, I couldn’t resist). 😉 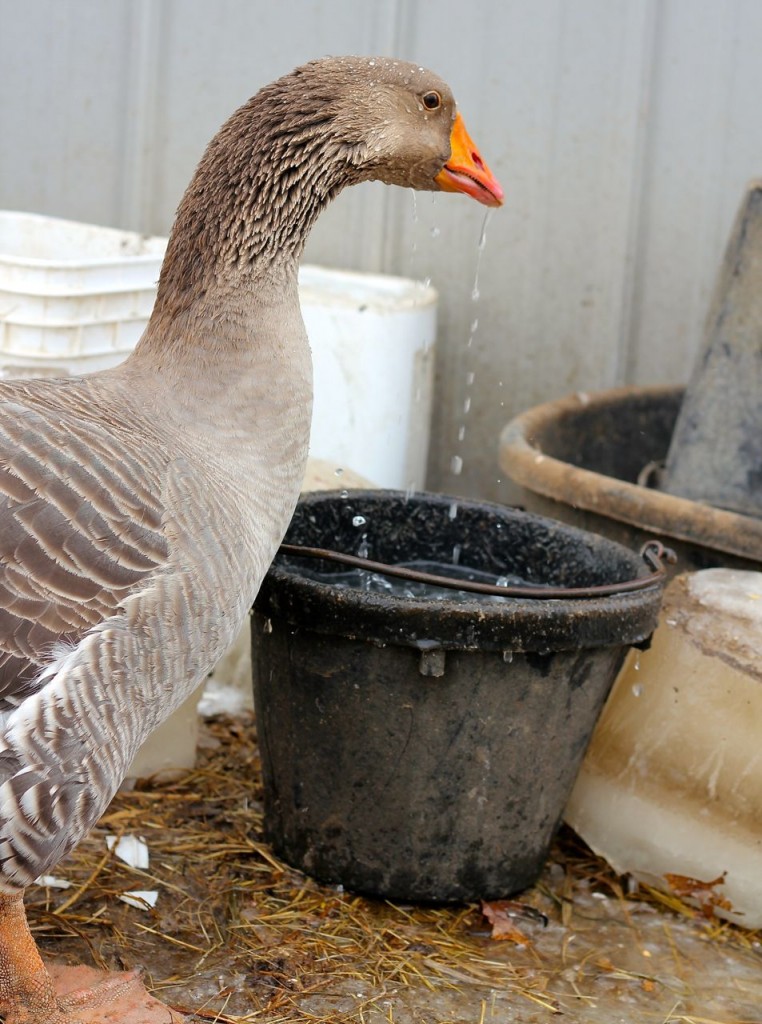 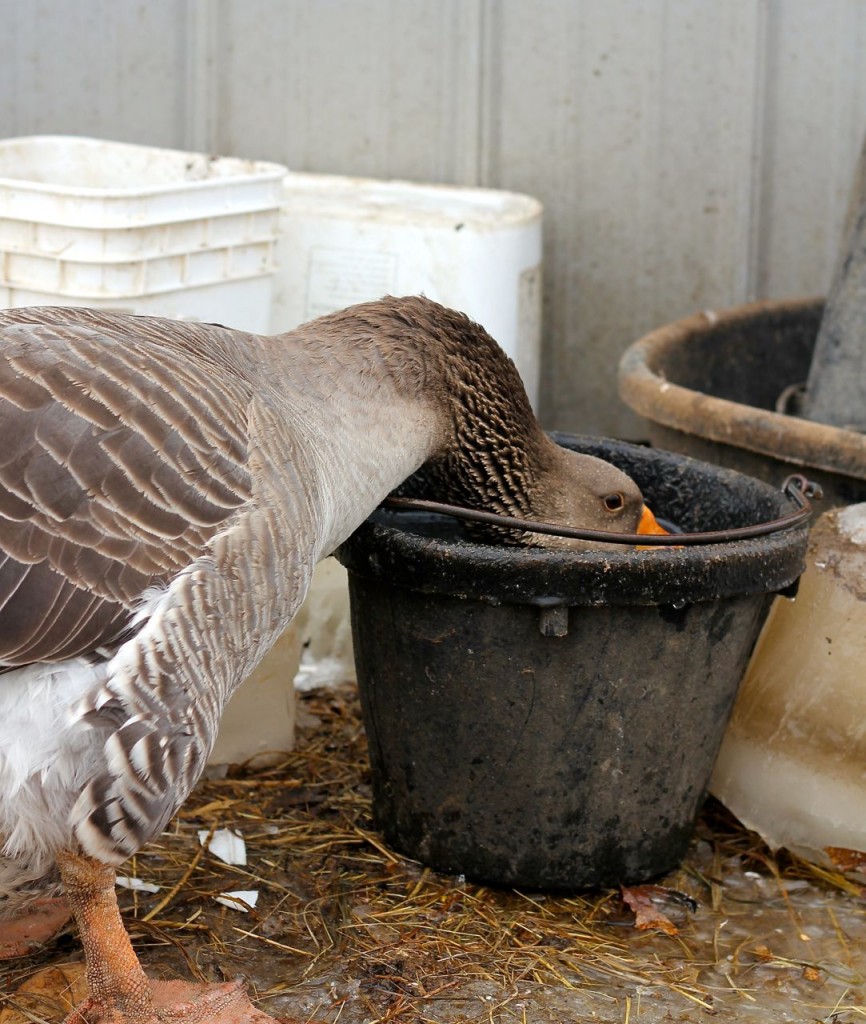 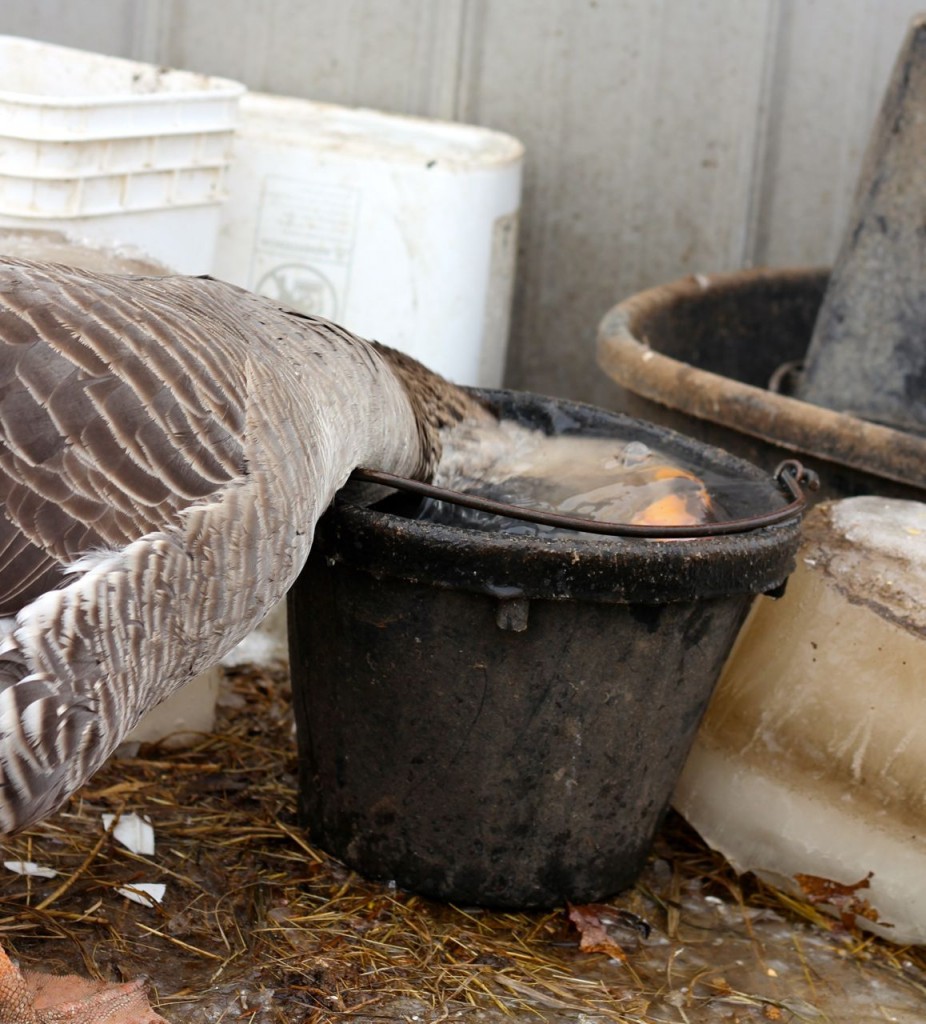 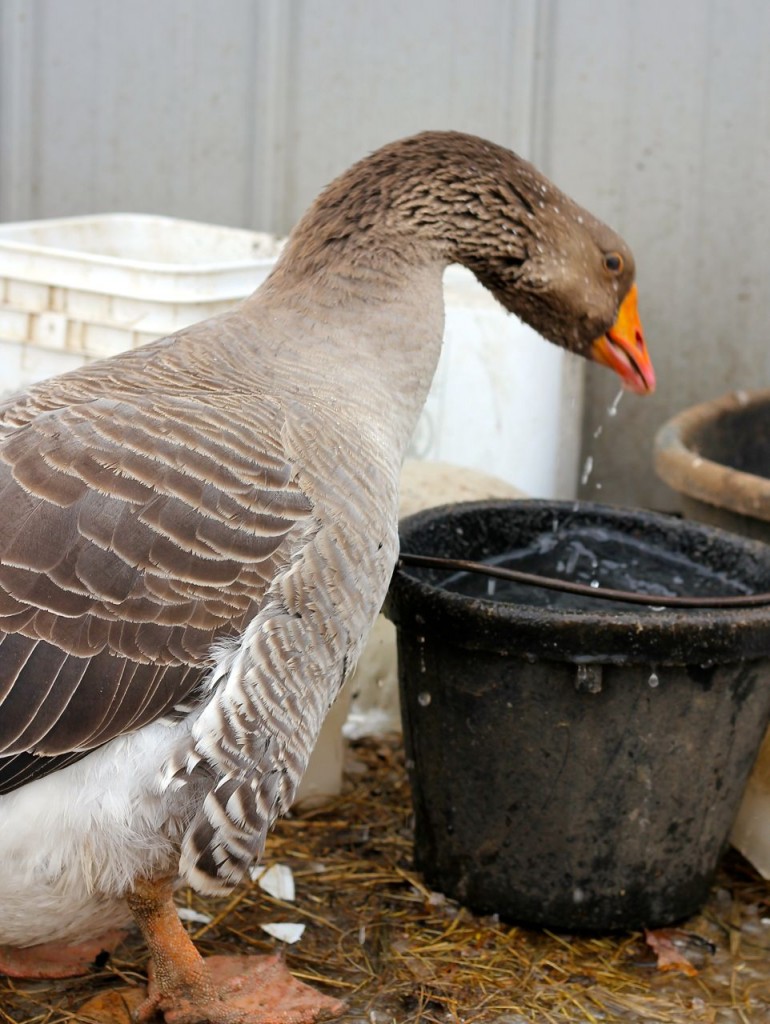 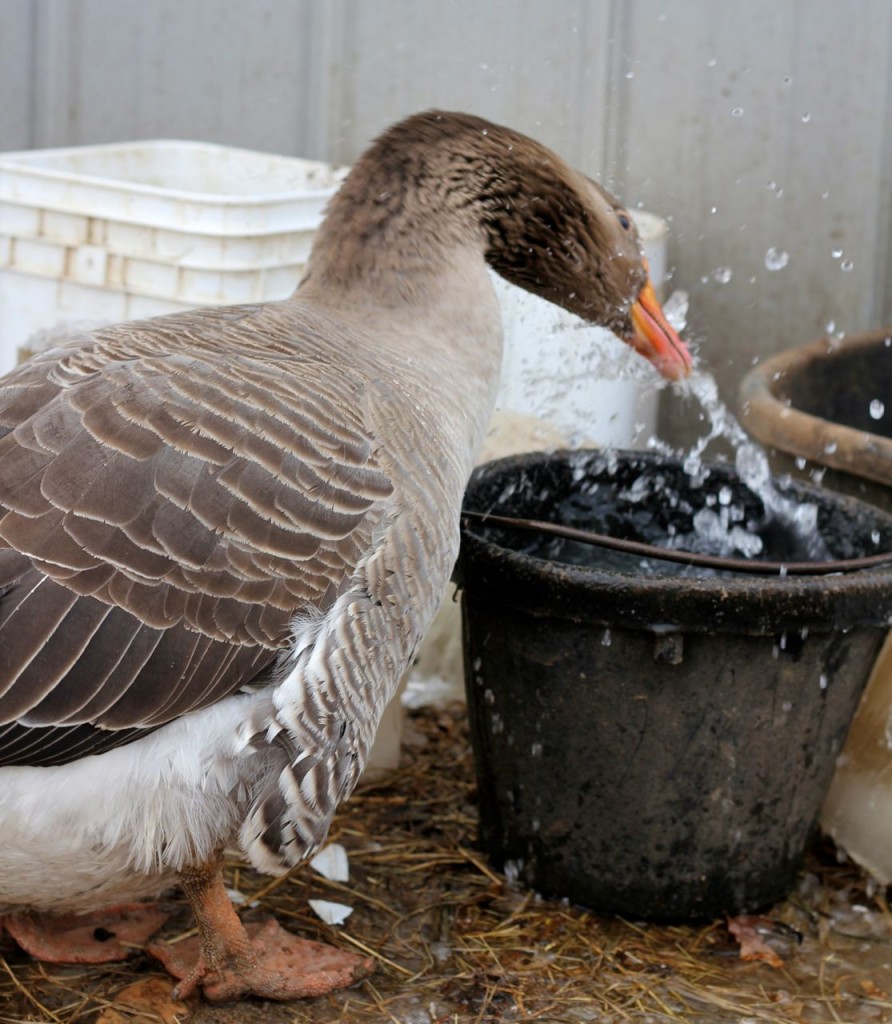 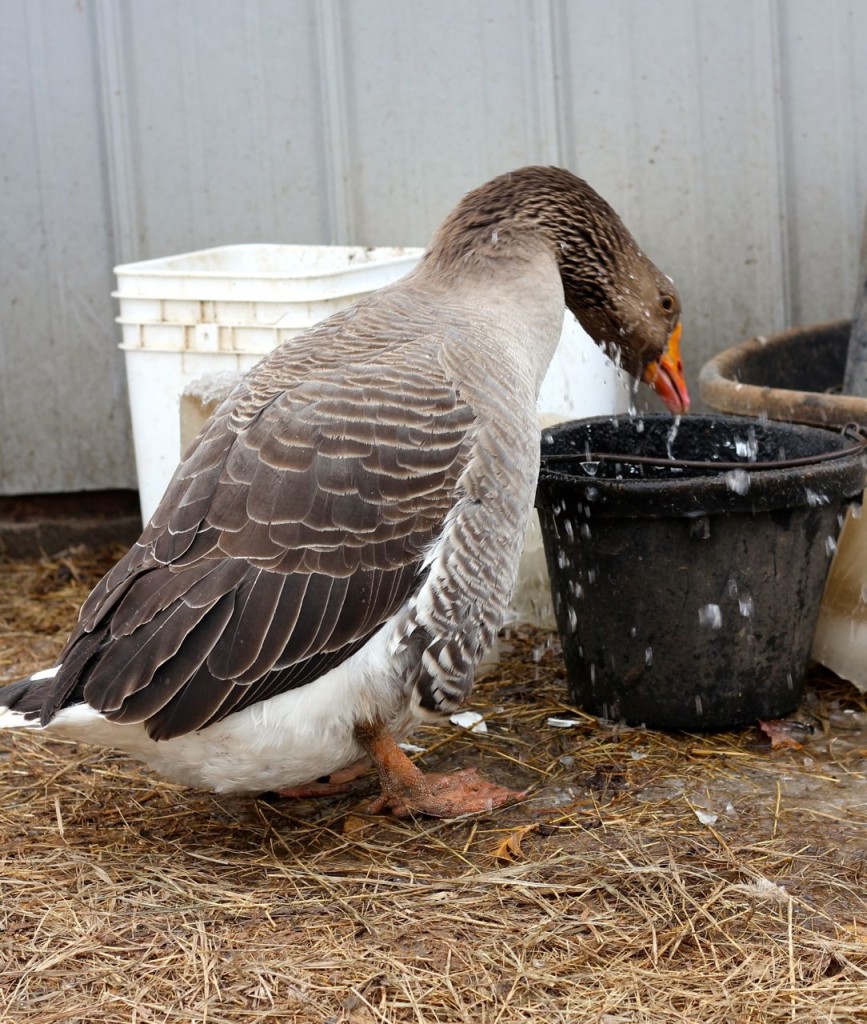 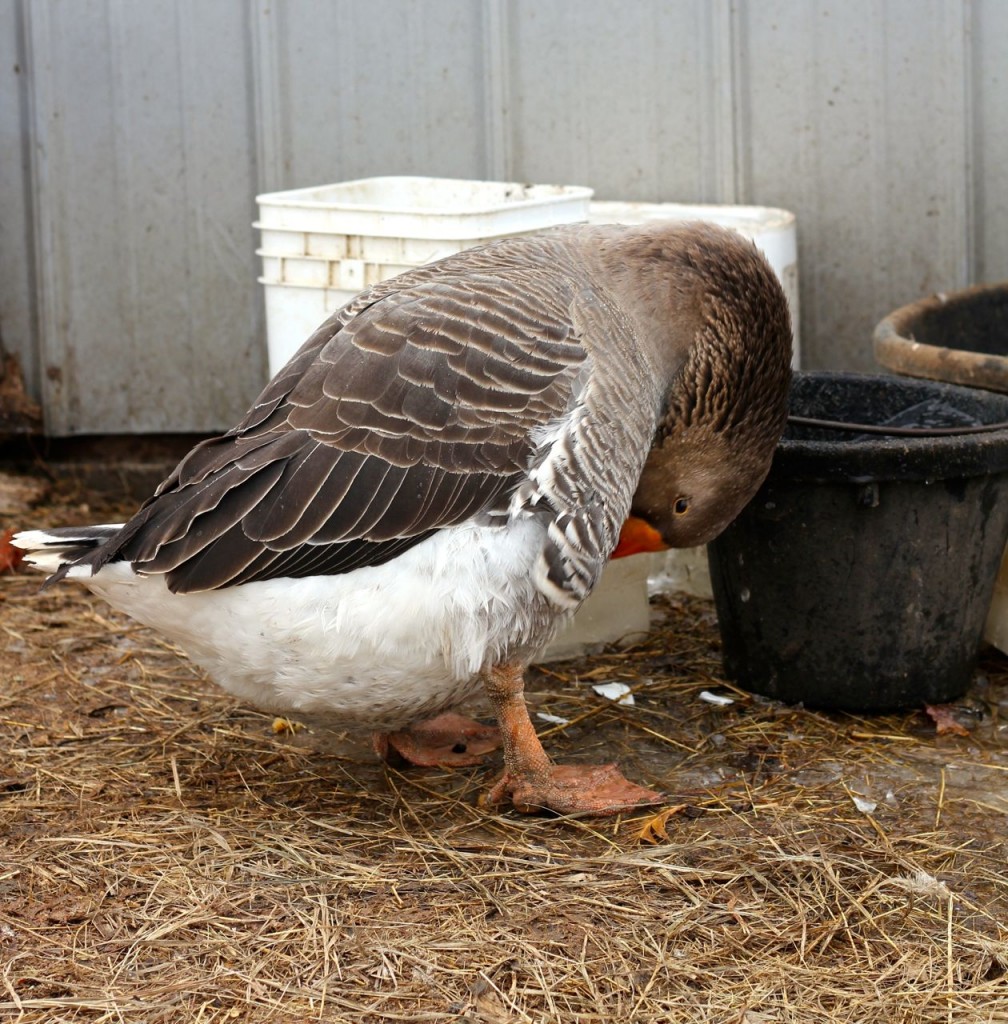 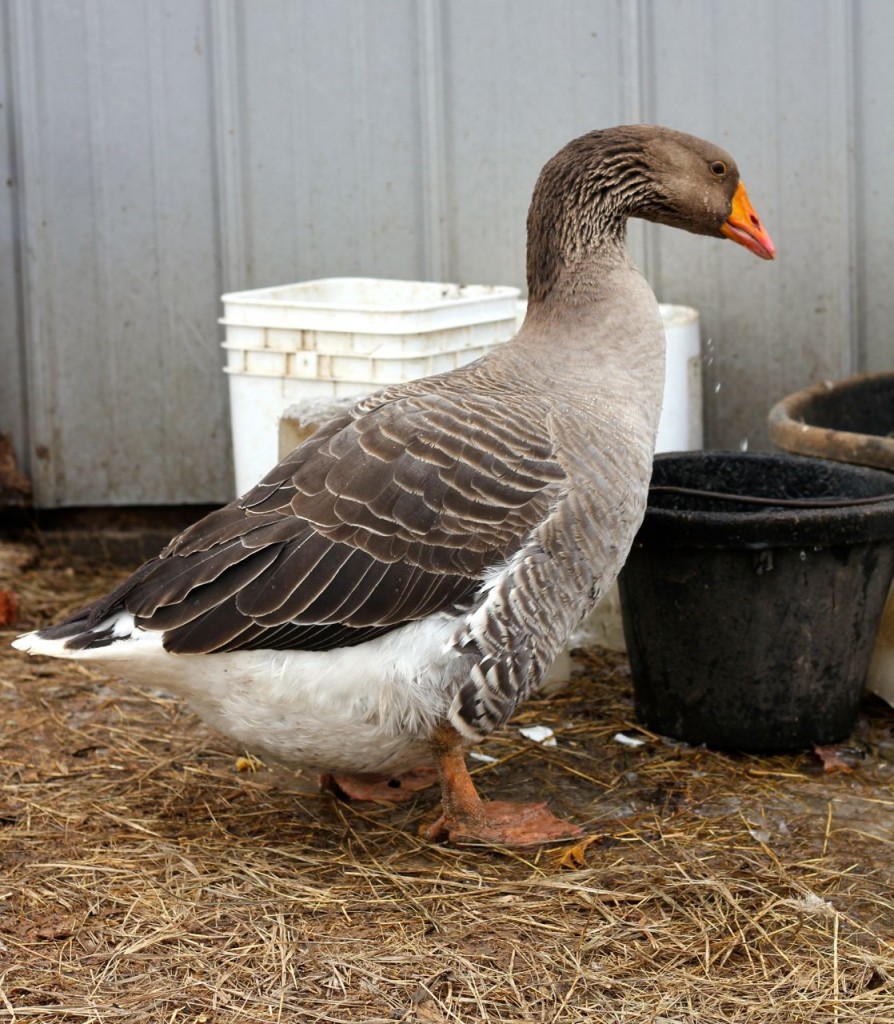 Never forget that this space was the first place (I would guess?) that you saw a pictorial sequence of a pretty goose, washing her face. 🙂

10 thoughts on “Don’t Forget the Goose!”