I recall the day little Mack crept out onto the porch where I was stealing a few moments to myself, and asked an enigmatical* question.

“Mom, the walls don’t have enough faces on them, do they?” he asked.  I wrestled my attention away from the magazine article that I was reading, and I tried to focus on my darling’s face. He was three at the time.

“The walls. They don’t have enough faces on them, do they?” Now his little face twisted in a funny, winsome, guilty, little grin. I am accustomed to this particular child asking the strangest questions, but I usually figure them out in short order. 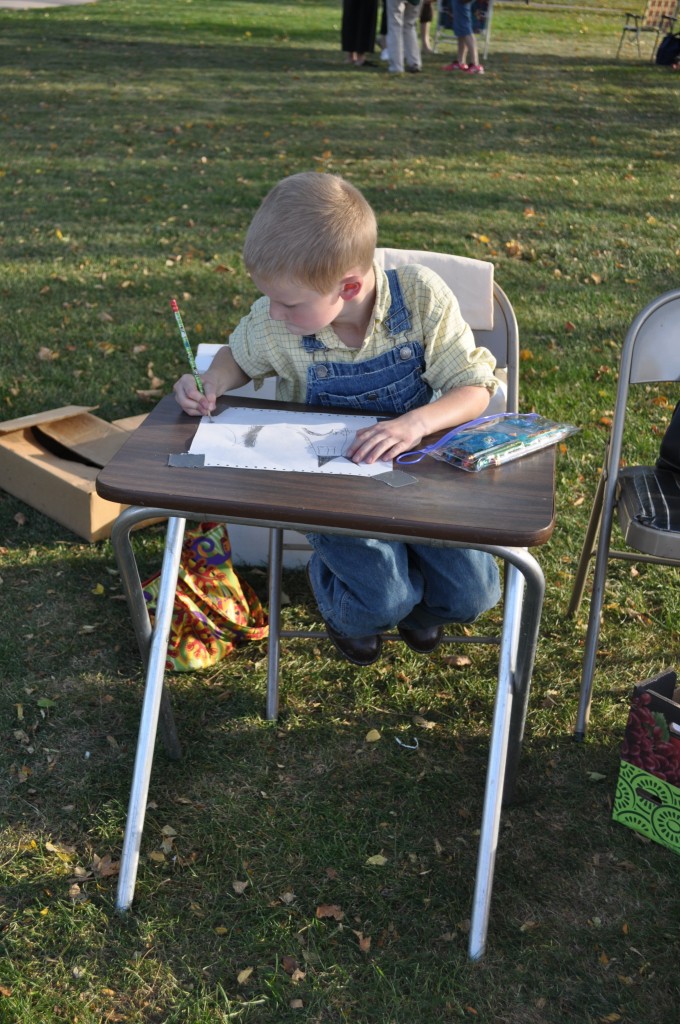 This is a much safer place for my son to draw: outside, with a pile of clean white paper, plenty of grass, and trees. No tempting blank walls.

I rose, slowly. There was absolutely no call for haste. Malachi is the youngest of six (count ’em, six) very creative children, so I had a good idea of what I was going to find.

And. I was not disappointed. Only ten feet away from where I had been sitting, enjoying my afternoon tea, on the wall in our living room, I discovered a good-sized area of drawings—drawings of little black faces.  Permanent little black faces. I sighed and shrugged, and explained to Malachi why the walls in the living room—indeed, in any other room in the house—didn’t actually need faces, as nice as his drawings were.  Then I fetched him some paper and some washable markers, and let him go to town drawing all the faces he wanted to, and I returned to my magazine.

You may wonder, Gentle Reader, how I could be so composed in the light of the fact that the newly-drawn, large permanent black drawing on my living room wall was going to cost me a fairly large wad of cash, oodles of time, and a fair amount of headaches. Remember, I’ve been through this before: since I’m sure I can’t find the original paint for that room, I’ll not only have to buy new paint, I’ll also have to decide on a new color, since I don’t much like the original color, anyway. (I never do.) It’s a royal headache to choose a new wall color around here, because I stink at it, and the colors others in my household suggest are even worse than what I choose (although that seems hardly possible).

Who wants a living room wall the bright blue-green of the town swimming pool? Or, say, black, or metallic silver? I don’t even ask for help any more. After an anxiety-filled few hours of agonizing over the jillions of paint chips at a couple of different paint stores, and then buying the new paint, I’ll probably change my mind when I get it on the wall because I’ll loathe the new color, of course. This will disrupt my life for at least a week because I’ll have to go to Wal-Mart late at night and buy more paint, and more paint, because I can’t sleep with such a wretched color on the walls, even though it was of my own choosing, because I stink at picking out colors for my walls, (did I mention this?) and, curiously, I do have a college degree in art, which makes no more sense than this long, rambling paragraph does.

Anyway, so how could I keep my cool at this moment?

That’s easy. One word: Andrew. My second son, the artist. The tall, handsome young man with a graphic arts degree, and the designer of a popular web comic and many other creative projects. The sweet young man who married a few years ago and gave me a lovely daughter-in-law and an adorable granddaughter. Simply put, his childhood prepared me for these trifles. Permanent black marker drawings on the living room walls? They make me laugh. (Ha!) Small potatoes, indeed, compared to the creative work that little Andrew pulled off.

So I’m thinking that maybe there’s hope for me.  Perhaps I’m  beginning to grow up, as a parent, I mean, recognizing the insignificant event that a permanent black wall drawing is, in the broad scheme of things.  Or, maybe, I’m just too tired and numb to do anything about it. 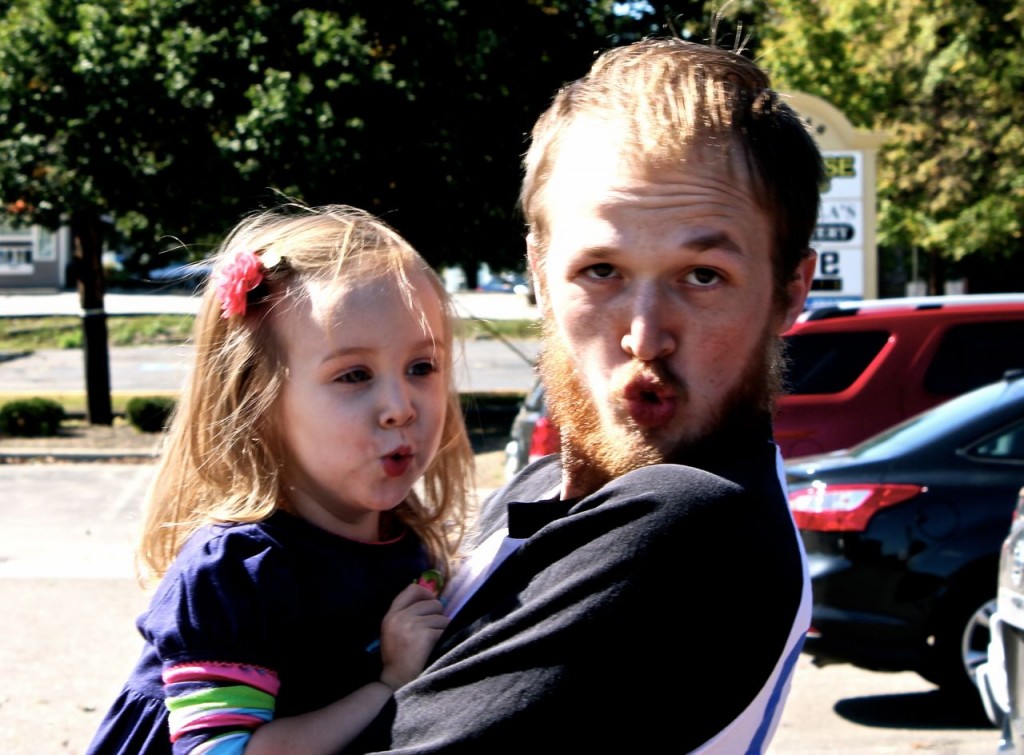 Andrew with his daughter Anya, also a devotee of permanent markers and wall-art. 🙂

Andrew loved drawing with permanent markers. Such strong, broad strokes! So much black ink!  So very black! So mightily permanent!! He drew amazing drawings one day, during his naptime, with a large black permanent marker all over the cushions of a little orange couch where he was supposed to be resting. Then he turned the cushions upside-down so I didn’t find them until much later. He was 2 at the time.

After I discovered the ornamentation on the bottoms of the couch cushions, and since the couch was now ruined, I gave him the okay to decorate the rest of the couch with the same marker. What the heck? There was no point in keeping him from it. The back first, then the other side of the cushions, then the front.  It was a pretty remarkable piece of artwork for a 2-year-old. Museum-worthy, if you go for that sort of thing.  “Orange Couch, Wild and Untamed. By Andrew Miller, age 2. Medium: permanent black ink and couch.”

I only wish I would have thought to have taken a picture.

Of course, I would imagine this is nothing unusual, compared to the shenanigans that go on in any house with a toddler running around with an uncapped permanent marker. The problem seems to be with keeping the cap on that marker! Or, wait a minute, here’s an idea: how about keeping the marker out of reach of the toddler in the first place?

I’m sure I didn’t just sigh and shrug and sit down to finish reading my magazine the day that I discovered that Andrew had decorated the wall in back of the couch in the living room. We had the house on the market at the time, and the drawing had been done on fresh wallpaper. When I cornered my diminutive son, he denied doing the drawing.

“Why do you think I did it?” he asked, eyes wide with innocence.

I pulled him over to the wall drawing and pointed at the incriminating evidence: he had signed it—several times, in fact—with his initials, “AJ.” Pretty obvious, even to a sleep-deprived, stressed-out mama of three children under 5, who happened to be trying to sell her house.

That little bit of artistic expression resulted in a quick trip to the wallpaper store, but of course they no longer carried that particular pattern—it had been a close-out, a bargain! So we—by “we,” I mean “I”– scraped the wallpaper off, and painted the wall an appealing, complementary shade. And then another shade, because the first one, I loathed, naturally. (I didn’t like the second shade much, either, by the way, but we were moving, so I settled.)

Andrew stopped taking naps before he was two. I tried so hard to find places for him to have his “Quiet Time,” so I could have an hour of quiet inactivity each day. But Andrew was so restless, so inventive, and so fiddly, that he would find ways to make my efforts to have a simple hour of quiet each day barely worth the effort.

For instance, the day he exploded the light bulb in my bedroom comes to mind. Again, he was supposed to be having his “Quiet Time.” Big brother Matthew was in the bedroom next door, immersed in his books.  Andrew was drawing with crayons, but had run out of paper, alas. It’s not like he could sit still for a few minutes, not coloring. Look at a book? Daydream! Lie down and rest—there’s a thought.

But no. The bedside lamp had a light bulb, and he decided to draw on that, naturally. What else could he do? Unfortunately the lamp with the light bulb was turned on, and probably quite hot. So when the crayon drawing (don’t try this at home, kiddos!) started to smoke, Andrew got alarmed and did the obvious thing (to him): he doused it with the glass of water that was sitting there.

“POP!”  The light bulb exploded, loudly, spraying tiny shards of glass all over Andrew, the bed, and the floor. Bryan and I were downstairs, enjoying the lovely, if ephemeral, quiet, when we heard the pop! and the screams from Andrew. We jolted up from our seats in alarm, and raced upstairs.

It’s pretty telling that it was the room Andrew was in that we automatically rushed to, not the one next to it where Matthew was quietly reading his stack of library books.

I learned early on that if I’d keep plenty of scrap paper around for Andrew, piles of it, in every room, and a nice assortment of drawing utensils, my home remained, for the most part, undamaged. Of course I haven’t touched on his hot-wax-sculpture period, but there’s time for that later.

Andrew eventually graduated to drawing on sketch pads and his jeans and shoes, instead of the walls and hot light bulbs. He’s got a computer with a drawing pad and pen, now, too, and plus he’s in his own house now, so hopefully he has learned some restraint in the wall-drawing department.

And anyway, with a little girl who has discovered the joys of drawing on blank walls—it has all come full circle, anyway. 🙂