Update: I wrote this post a year ago, as I was just getting started growing my own ginger for the first time. I grew a small patch of it in my hoop house and it did great! I’m going to head to Trader Joe’s later this week and buy myself a basketful of fresh ginger and pot it all up in damp peat moss for this year’s garden. My first garden task of 2015!

True Confession: I LOVE ginger. I have lots of favorite recipes which star ginger, and I love to dice it up into stir-fries and soups, chewing on little juicy bits as I do. I flavor most of my kombucha with fresh ginger. I put ginger in my zucchini bread, and I chop up pieces and put it in my herbal tea nearly every day. With my miserable propensity for car-sickness, I try to keep ginger candy in my pocket, to chew on when I start to feel queasy. Ginger and I go way, way back, let’s say. I discovered how to make candied ginger a few months ago and that made me very, very happy indeed. Did you know that ginger root is very good for you?

Check it out: ginger relieves indigestion, nausea, colic, gas, heartburn, morning sickness, and motion sickness. In addition, ginger seems to protect against ulcers, is helpful against internal parasites, and may even ease acid reflux. Old timers also knew that ginger was good for coughs. Further, it warms you when you are chilled and paradoxically, helps reduce a fever. Ginger compresses relieve sore muscles, stomach cramps, and swollen glands. Ginger root is great stuff, folks! 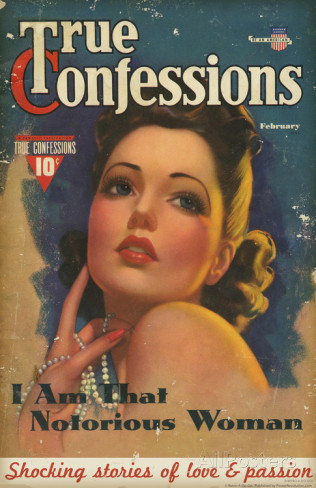 But here’s the thing: I had never considered growing it myself. It’s a tropical plant, right, which means that it’s grown . . . um . . in . . . the . . . tropics, right? India, China, and Indonesia are the top producers of ginger today. NOT Iowa, Nebraska, or Kansas. So this was what I believed, that ginger was in the same class as pomegranates and avocados to me: I love them passionately but I know that I’ll never grow them, because our climate here is all wrong for them. Also for lemons. And, apparently, bananas. So many things.

And then. Guess what. One day, one fateful day, my friends Norm and Jamie, professional Nebraska market growers who really know what they’re doing in the garden, blew my mind away (unintentionally, I’m sure!) (whoosh!) by dropping a very casual and oh-so-cool comment about some wonderful fresh ginger that they had just harvested. Yes. In their own Nebraska garden, that garden not being more than 30 miles or so from mine.

I couldn’t breathe for at least five minutes, I was so astonished. When they revived me at last, I made my dear friends promise to share their ginger-growing secrets with me, under the threat of a very nasty, prolonged death, if they refused.

Well. That part isn’t true. Anyway, Norm and Jamie would have shared their ginger-growing secrets with me even without the threat of torture and probable death, because they are very sweet and generous people, and that’s good news for me and great news for you, Gentle Reader.

Because I’m going to share (with permission, natch) these ginger-growing secrets with you. You can grow ginger root, even if you don’t live in the tropics, and you don’t even have to buy the expensive starts from Hawaii, even though that’s what Norm did the first year he grew ginger.

First, here’s a picture of the gorgeous baby ginger that Norm and Jamie grew last year to prove that I’m not making this up!

Yup. Not makin’ it up! (photo credit Jamie Rohda)

And here’s how you can grow this glorious stuff, even if you don’t live in the tropics: 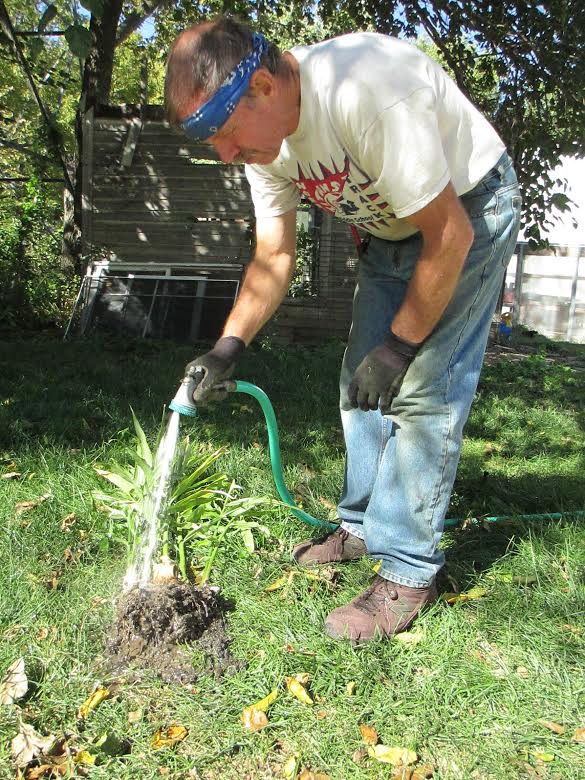 Here Norm sprays a clump he dug up, as a test. How are they doing? 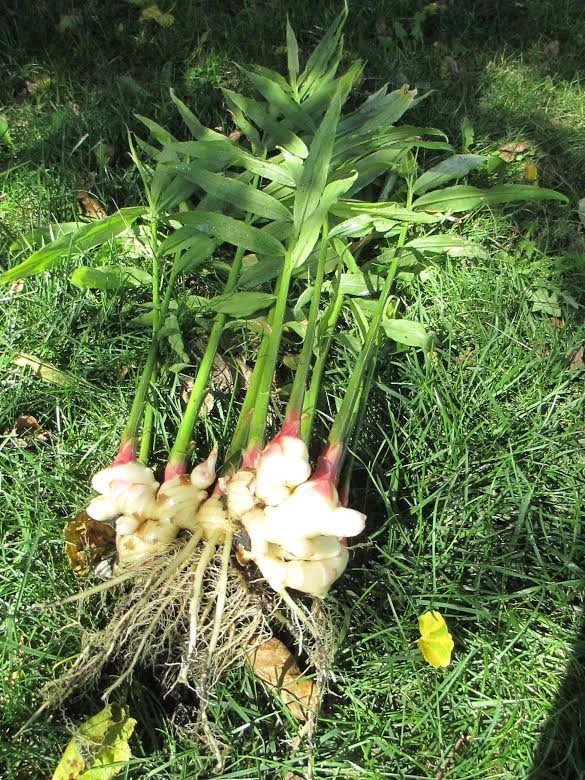 A few more notes from Norm:

Thank you again, Norm and Jamie, for your input in this post! I’m looking forward to growing my very first batch of ginger this year!