It’s such an old joke in these parts that it has become a cliche: the only time we lock our car doors around here is during High Zucchini season–to prevent our neighbors from sharing their surplus zucchini with us.

If you grow zucchini, you know why this old saw is funny: a single happy zucchini plant can be an overeager producer, putting out many more of the squash than is easy to keep up with. When the squash are small(ish) they are tender and are a succulent addition to soups or stews or stir-fries. But woe to you if you forget to check your plants for a day or two, or have to go out of town for the weekend. Zucchinis are like commercially-raised hogs, in that they just don’t stop growing. They just get bigger and bigger and BIGGER, in a very short span of time, too, until they are no longer so succulent or tender. Until you can barely lift them.

So what can one do with one of these behemoths, you may be wondering? 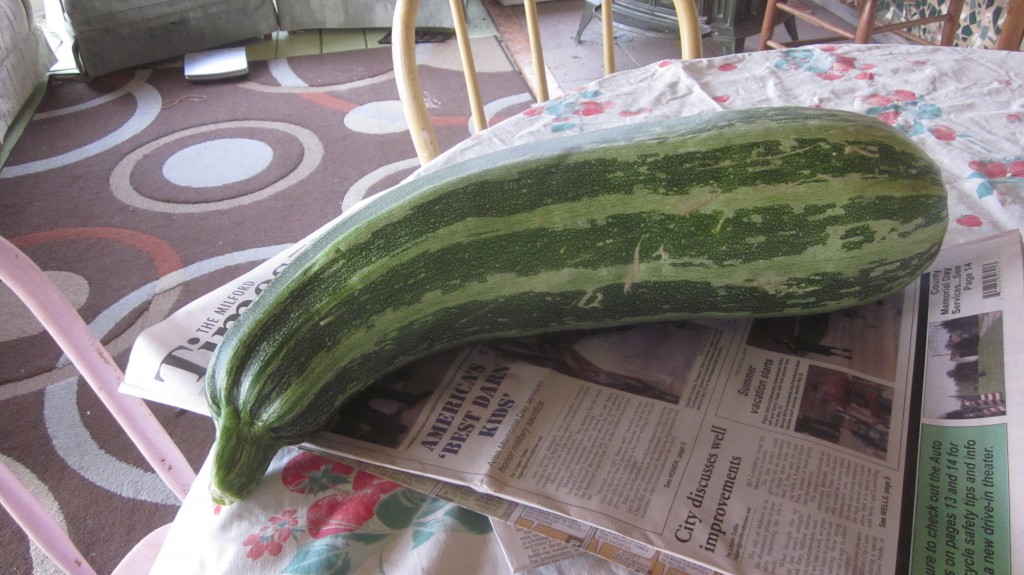 Because of mountain lion sightings in our area, we’ve learned to grab some sort of stout weapon whenever we go out to shut the chickens in after dark. Usually there’s a pitchfork or a shovel on the back porch and I’ll grab one of them and have fantasies about fending the neighborhood lion off all the way out to the coop.

If suddenly one day this blog goes black and you never hear another word from me, you’ll know that I finally met that mountain lion in the dark, and the pitchfork didn’t cut it. But I really don’t think that’s going to happen. Not with little Mack looking after me.

One day little Mack–my little man who dearly hates it when I go out there in the dark by myself and usually goes with me–was sick and so couldn’t go with me. He handed me a very large wrench. “Here, Mom, against the mountain lions,” he said. I looked down at the wrench. “A wrench?” I asked him.

But anyway, I’m off-point (and that never happens, right??). One night I stepped out on the back porch and there was no pitchfork or shovel or even a powerful wrench to be seen. I cast my eyes about until they landed on . . . a pile of very big zucchinis. Perfect. Weapon. As tough as the wrench, heavier than the shovel, and I’ll tell you this: I certainly wouldn’t want to be hit in the head with one. I’m sure the mountain lions in the area feel the same way. Pshaw. 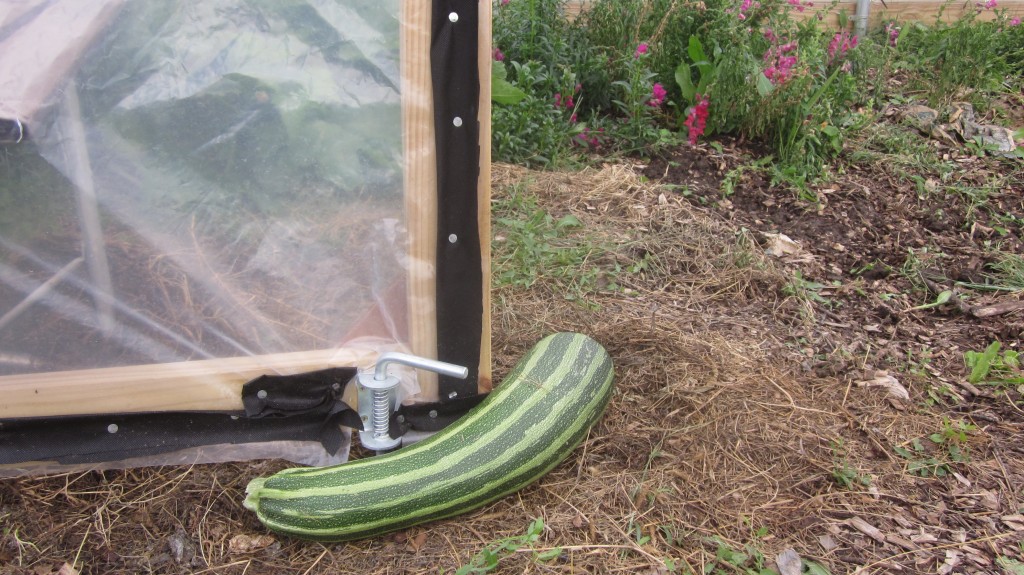 A large zucchini makes a great doorstop out at the hoop house.

Anyway. If you don’t let your zucchinis get too big (if you can’t pierce the squash’s skin with your fingernail, and neither can you cut it with a knife, and it you can’t carry it to the house because it’s too heavy, then it’s too big) then they are great shredded up and made into zucchini bread.

I’ve always liked zucchini bread. So what’s the problem? I’ve LIKED it, Gentle Reader. In a mild way. But I’ve never loved it. Not with a passion that would spur me on to go to the trouble to shred and freeze enough for several batches, that is. Zucchini bread is, I’ll grant, moist and tasty and an excellent depository for neglected zucchinis.

But if you’re only mildly interested in zucchini bread, and when matters–such as husbands and a goose and grandchildren and children who all need regular feeding–converge to keep you from harvesting your zucchini squash when they are small, you may end up pushing a wheelbarrow full of bloated baseball bat-sized squashes to the house, wondering if you should just pause at the chicken yard and toss them to the chickens immediately and save yourself some time and bother–well . . . perhaps you should reconsider for a moment.

Because I’ve got the recipe for you.

After all, if you’re going to shred up enough zukes to sock away in your freezer, enough for several batches because you’re in that kind of a mood (where even the housecat is watching you carefully, afraid, perhaps, that you might just obey a whim and throw her into the juicer or sock her away, grated, in the freezer for winter-time eating) and it’s October and harvest time and so forth. 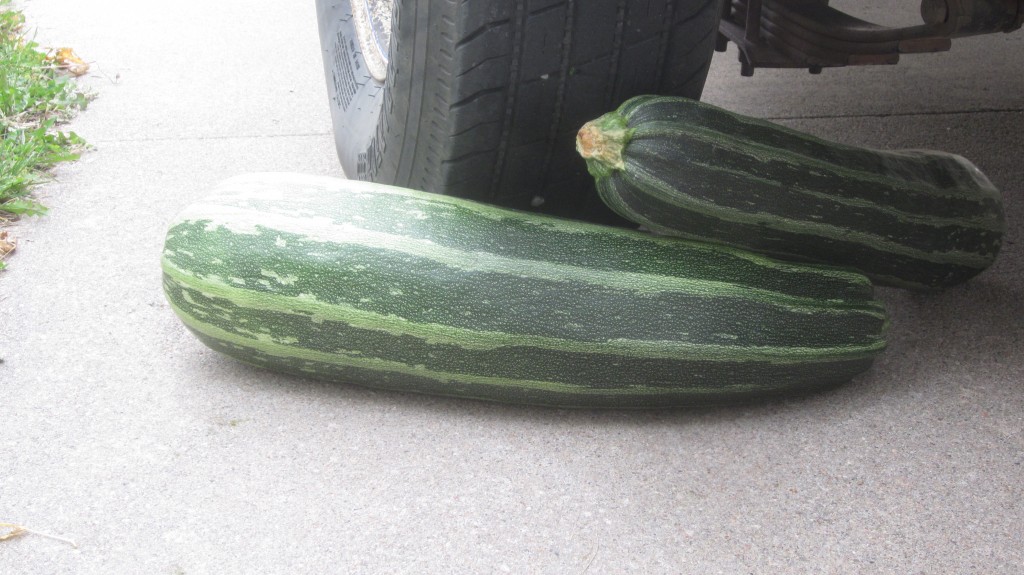 A pile of big zukes can be a very effective wedge to keep the trailer from rolling away.

This was my thought: if I can come up with a zucchini bread that I will really LOVE, then it will be worth my time to grate and toss into freezer bags enough grated zucchini to make many batches of this bread over the course of the winter. In fact, I’ll feel very clever about it, it being harvest and stocking-up-time and October and whatnot.

Typical zucchini bread is bland, to my tastes. So this week, as I thought about those big zucchinis and how to make a better zucchini bread, this one thing kept popping into my mind: ginger. Candied ginger, in fact.

So first, I bought a pound of fresh ginger and I made myself a batch of candied ginger. I love that stuff. And then, I ate half the batch. I really love that stuff (burp.)

Then I mixed up a batch of zucchini bread, and I added candied ginger, chopped very very fine, to the zucchini batter, along with a few more toothsome spices, and (to top it off!) I made a wonderfully spicy icing to dribble on the top.

Then I ate a slice. Oh, baby. Then, I ate another. Heavens to Betsy. I did it. I made a recipe for zucchini bread that absolutely shot my socks off. 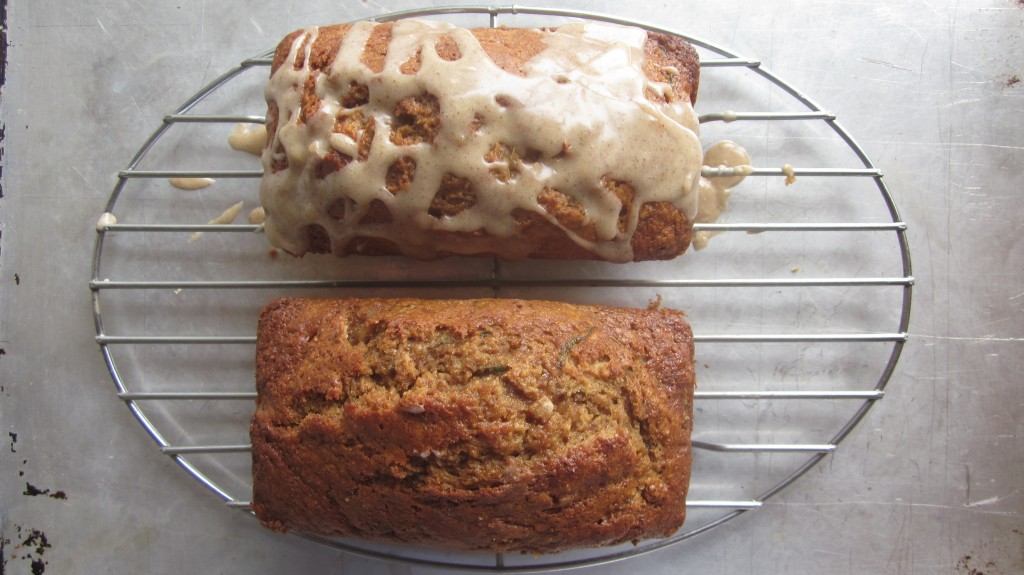 Two loaves of zucchini ginger bread, the top one iced and the bottom one au naturale

And, by the appearance of the several decimated loaves out on the bread board ten minutes later, it also impressed my family. Yay, me!

And yay, you, because here’s the recipe for you to try!

Note that this recipe contains coconut oil, my new BFF, and note, also, that you can buy candied ginger instead of making it, if you like. Just buy enough to eat some of it while the bread is baking. 🙂 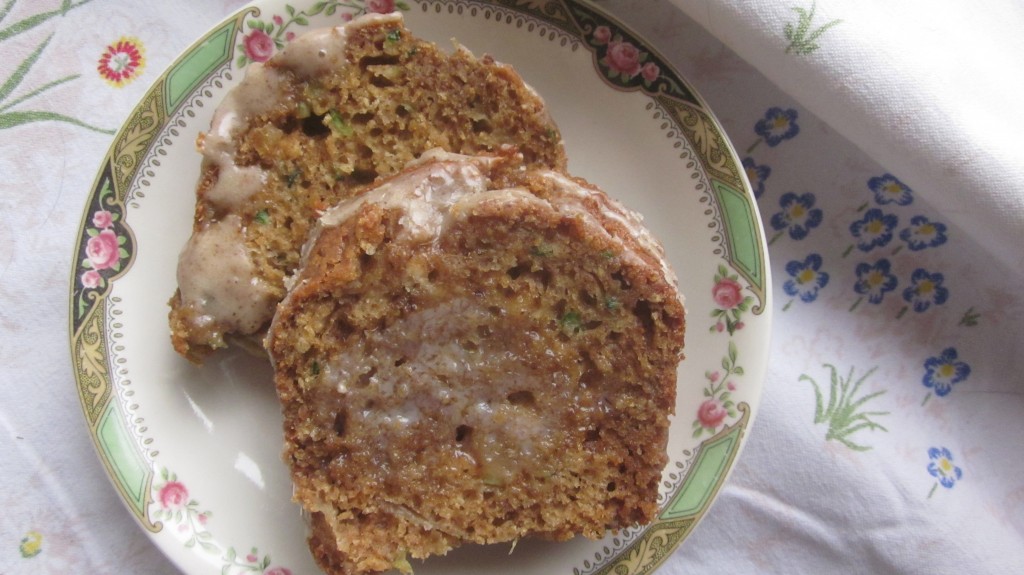 A skiff of butter on the warm bread won’t go amiss, either . . .

I’ll be sharing this post with The Prairie Homestead and Frugally Sustainable because I like mixing with all those folks. Come on over and join us!

Tagged on: how to freeze zucchini, recipes with candied ginger, what to do with overgrown zucchini, zucchini ginger bread recipe, zucchini recipes