Have you been wondering if we ever finished our hoop house, already? We spent quite a bit of time this spring building it, but by the time we had finished the structure, it was too hot to stretch the poly (the big sheet of plastic) over the top, so we stopped working on it for a time. I planted it full of winter radishes and leeks and zucchini and eggplants and peppers and some pretty flowers like the pretty yellow coxcomb below . . . and then we waited for the weather to cool down.

If you’re curious about how this all went up, or even what the heck I’m talking about, you can start the entire thrilling series right here, with a post I wrote entitled “Building a Hoop House isn’t for Sissies.”

And it’s not a job for sissies, either. It took more time than any of us ever really imagined. But now I can grow something perfectly beautiful like this coxcomb . . . . without worrying about the wind buffeting it and the early frost freezing it . . . and so I’m sure that my good husband Bryan counts it all worthwhile at this point, right, (cough) honey?? I mean it really is a lovely coxcomb . . . sweetie?? 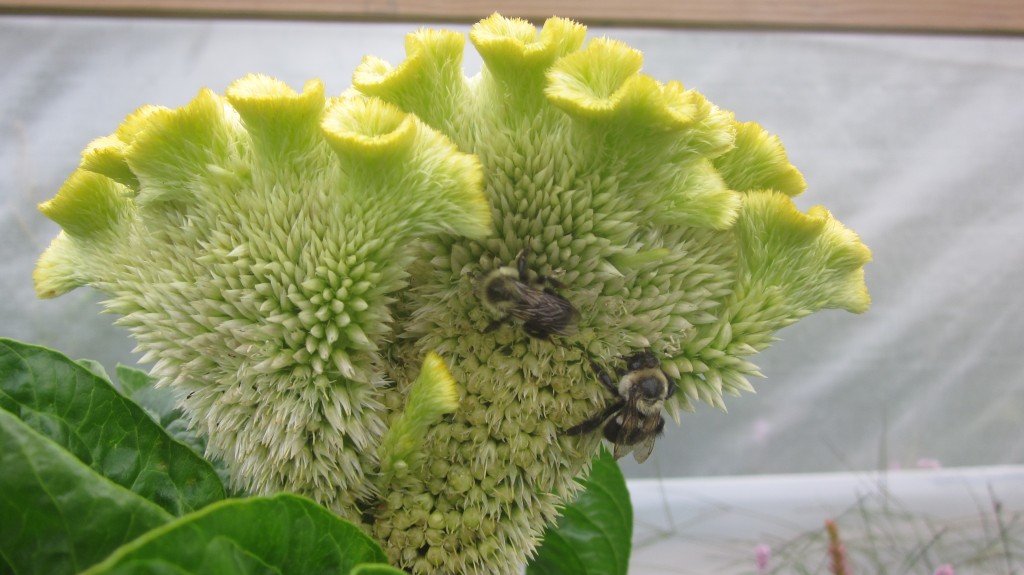 These bumblebees seemed to be drunk on the nectar from this coxcomb. For myself, I can’t stop looking at it. I do love coxcomb.

So I enjoyed the summer’s busyness and waited for the weather to change, as patient as I can be (not very). You can’t stretch poly over a hoop house on just any day, no sirree Bob. This is what we learned from others who know. The air has to be the correct temperature–not too hot and not too cool. If it’s too hot, the plastic will stretch too much, and then when it cools down again, it will shrink and pop out of its supports. Perhaps you’re not getting me at this point,  but hang in there, you will. Also, there can be no more than the merest whisper of wind, lest the huge sheet of poly take you up, up, up, (Yes, I know that you’re thinking of the movie UP, as am I) to a faraway land, whether you want to be thus transported or not. (As for me, it depends on the land, yes . . . for example if the sheet of poly took me to New Zealand. . . well, maybe I’d go along with that.)

Of course we had to wait for work schedules to coincide, as well (actually, not-working-schedules) since we needed both good husband Bryan and crazy barefoot-monkey-son-climbing Timothy involved with the project. Definitely.

Believe it or not, after months of waiting for the ideal day, perhaps even thinking it would never come . . . it did come, after all. The day was absolutely perfect: cool and almost still (we live in a very windy area, so a 5- to 10-mph wind is, like, dead quiet out here) and Bryan and Timothy were both available for the morning. Plus (bonus of bonuses!) we had an entire passel of willing, long-legged and cheerful helpers who agreed, at the last moment, to come help. With any luck at all, it would only take an hour or two to pull the poly over the top with this great crew, and then a bit more time to fasten it to the ends, and the hoop house would be finished. At. Last. 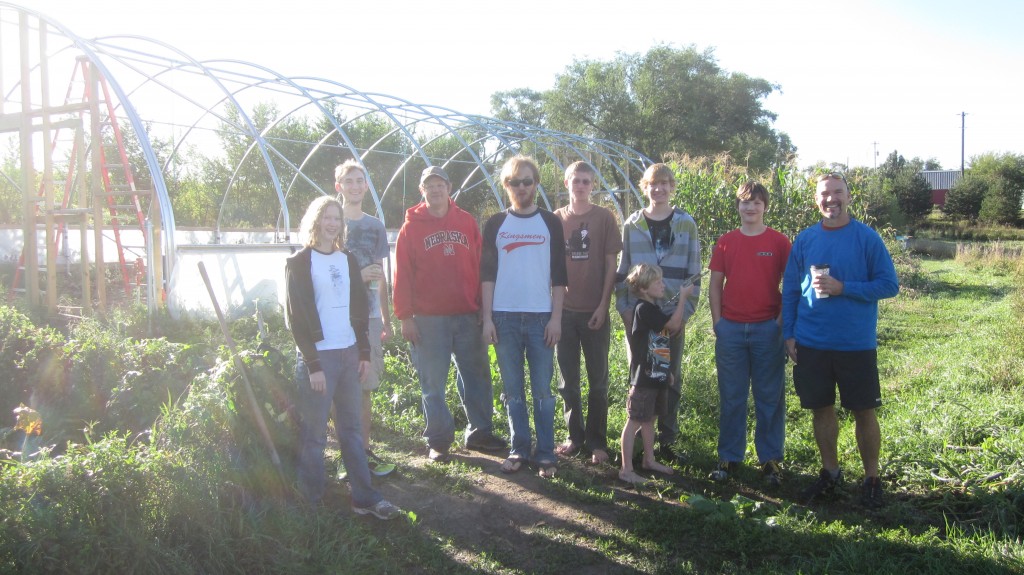 Here’s our willing and able (and long-legged) team: from the left, our daughter Amalia, nephew Davey, Bryan, sons Andrew and Timothy, nephews Adam and Luke, and brother-in-law Dave. Little Mack is in the front row. (He always is.)

Here’s how the morning went: first, Bryan got his crew into a huddle, and explained the procedure. It was pretty simple, really: the vast roll of poly would be unrolled at one end of the hoop house, pulled carefully over the top of the structure, guided along by Timothy (atop the ladder inside the hoop house) and several helpers on each side.

Bryan would oversee the entire project, barking orders in his nicest way, and guiding the huge roll of poly from one end. He had already set up stumps on the north end for the roll to rest on, so it wouldn’t snag on the grass. Smart man, my husband. Resourceful, even. 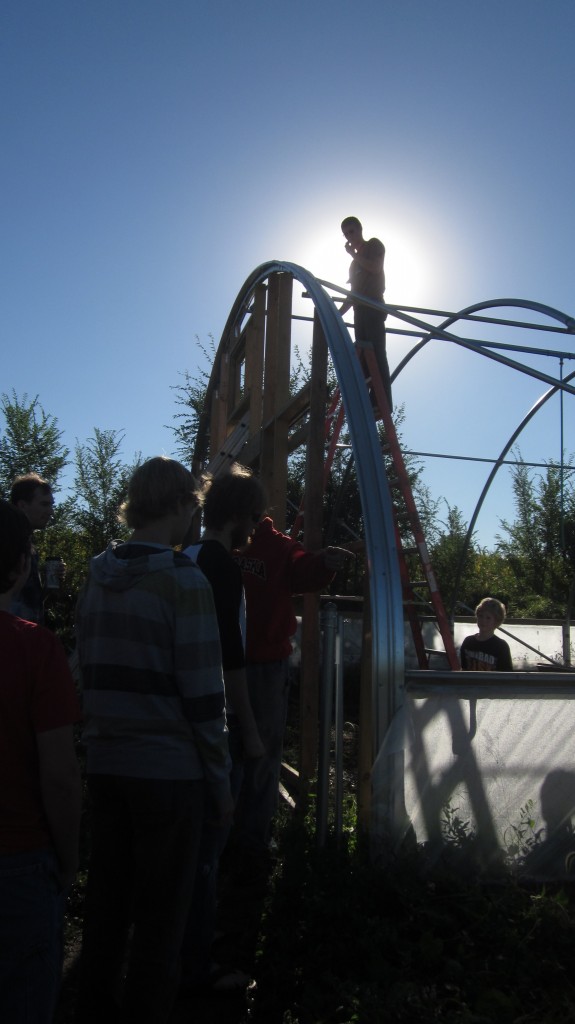 We started bright and early, just as the sun was rising. That’s Timothy, high up on the ladder, of course. Barefoot. And please don’t scold me for it. He’s 19 now and thus is a Law Unto Himself.

Once it was all pulled over the top, we’d adjust it to just the correct position, and then we’d attach it along the hip boards (on the outside) with wiggle wire, that famous invention that we all admire so much.

I still want to get a bundle of it for my husband for Christmas, but shhhh, don’t tell, okay? He loves it like a brother.

It all sounded so simple, and there were warm honey-cinnamon rolls and my new favorite bulletproof coffee to enjoy when we were all finished. That was the proverbial carrot-on-the-stick.

I was still a bit nervous about it all, but as luck would have it, since we had so many cheerful helpers, I was basically free to hurry around and fret, and take pictures, naturally, and to fetch things that needed fetching. So that’s the role I played. Hurrier, worrier, fetcher, and documenter.

Once Bryan’s hopes and dreams were communicated, we all got into position. Timothy got up onto the high ladder, where he feels happiest anyway, I think, and the side wall helpers got into position. Bryan started the poly unrolling, and I bit my lip and scuttled about, watching for snags or tears to spontaneously happen. Or the wind to suddenly pick up. Or somebody to get hurt. I’m not really a pessimist, but I was a bit apprehensive on this day.

Now I’ll let my pictures tell the rest of the story. Basically, I’ll be quiet and get out of the way. Here goes. Quiet, quiet, quiet. As a mouse. Shhhh. . . 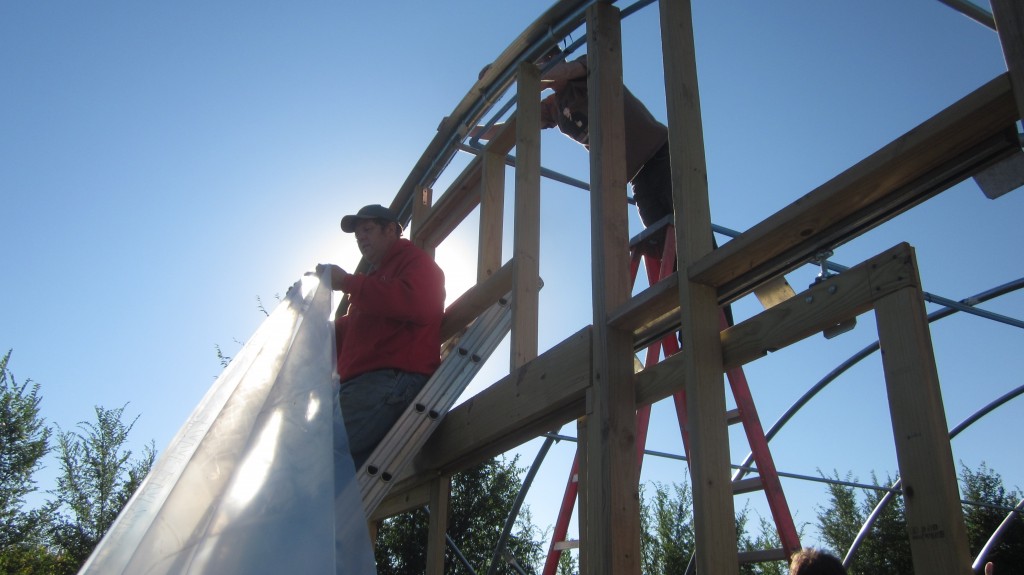 Here’s Bryan pulling out the poly and drawing it up to Timothy. 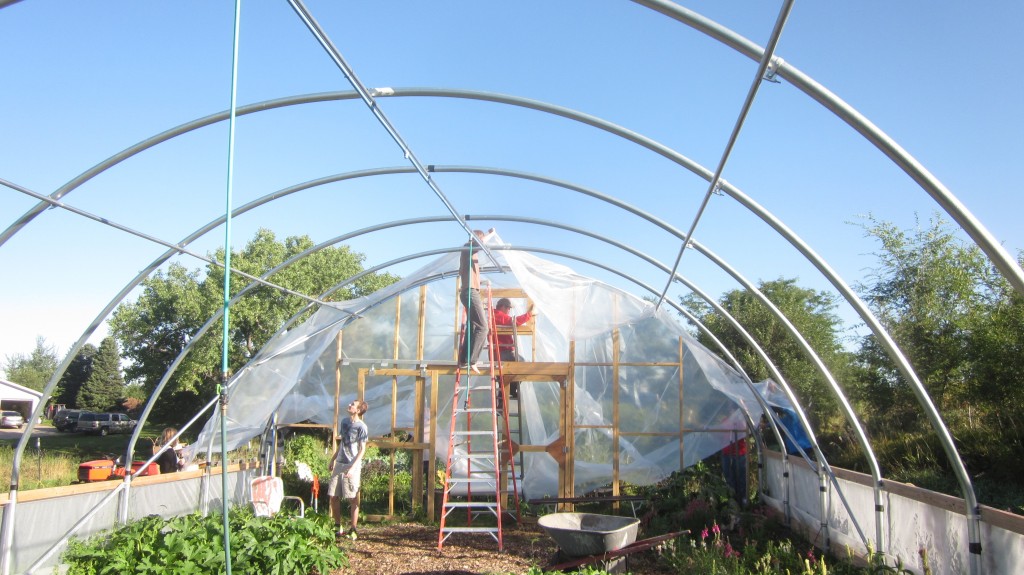 Two helpers on each side pulled gently, while Timothy eased the poly over the middle purlin. I distracted myself by wondering if I had turned off the oven after I pulled the rolls out of it, just a few minutes before. And noticing that the breeze was picking up. 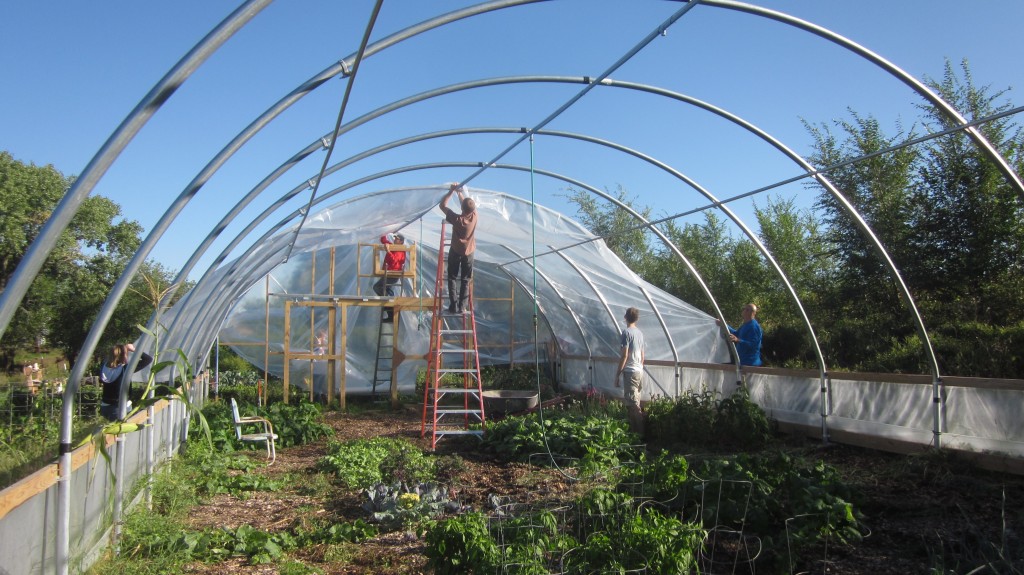 Here it goes! Timothy climbed down and moved the ladder every few feet. I grabbed the ladder once when it began to tip. In essence, I saved the day. Ahem. Not that I’ll blow that trumpet any time soon, you can be sure of that. I’m humble that way. And quiet. Here the poly has been pulled over the entire top of the hoop house, hip, hip, hooray! Bryan is still easing it over the purlins and all our helpers are gently pulling . . . Here’s the side view. No, those aren’t weeds, by the way. Just some . . .um . . natural, um, native vegetation which will be plowed into the earth (organic gardening and such) at the proper time, like, uh, soon. (Have you noticed yet that I can’t stay quiet? Me too.) 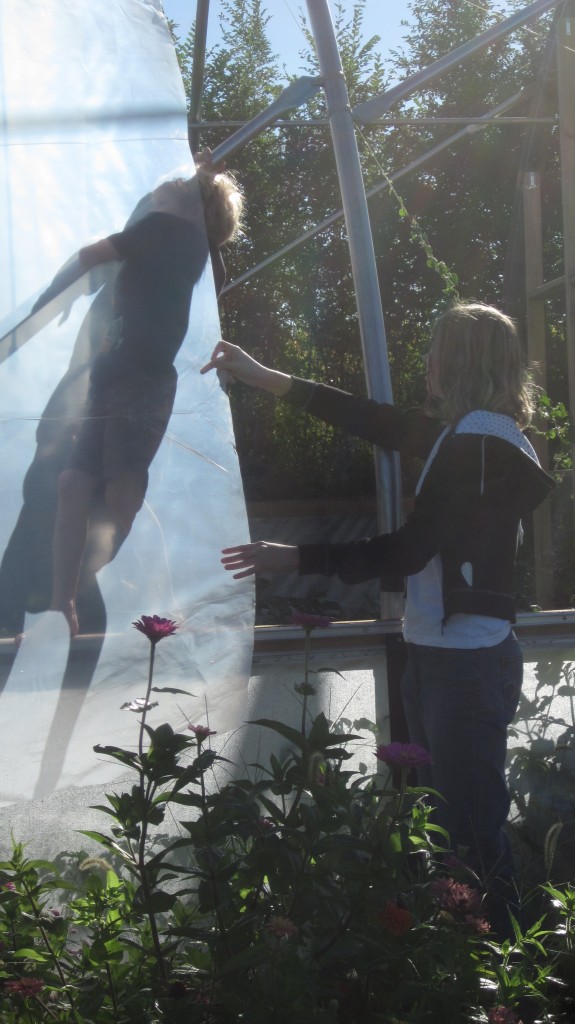 It’s a . . . a. . . . ZOMBIE! But Amalia doesn’t seem to be afraid. Perhaps she has a ready supply of mature zinnias to grab, in case she needs to bop it with something.

Amalia is pulling one side of the poly, here, and little Mack is making an arresting shadow. 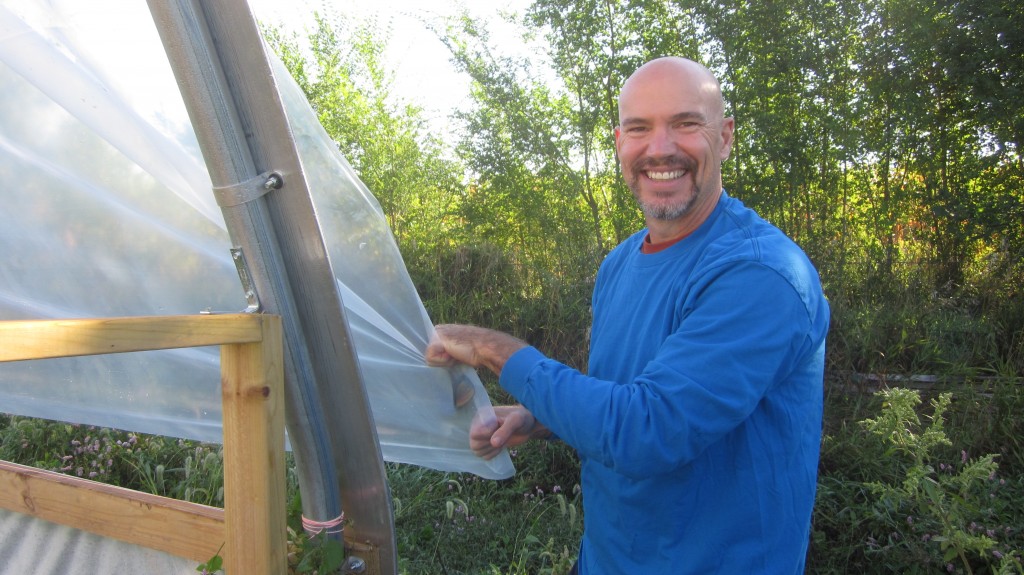 Here’s my brother-in-law Dave (sorry, gals, he’s taken!), the dad of my three nephews who were out helping. Not to mention, asking me about the alleged existence of warm honey-cinnamon rolls . . . if there really were such a thing about . . . somewhere . . . 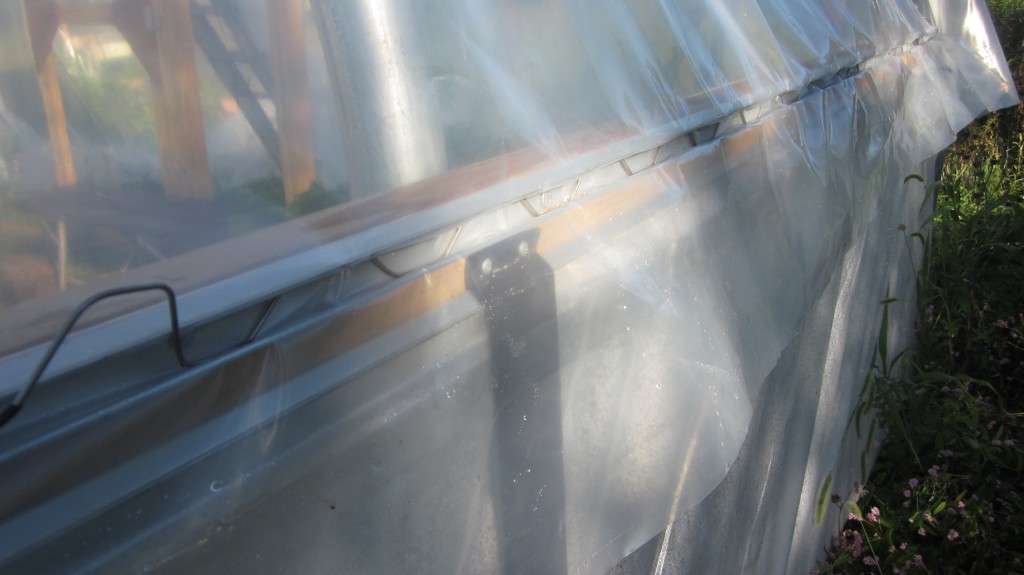 Here’s a close-up of the wiggle wire, which we’ve all agreed is the Coolest Invention Ever. It wiggles (of course) into a dandy track, and it holds that monstrous piece of poly down, without a single hole or anything. Cool, huh? Here’s my monkey-son Timothy working the Wiggle Wire into the track at the end. Maybe you can imagine why I am in a constant state of nervous apprehension . . . 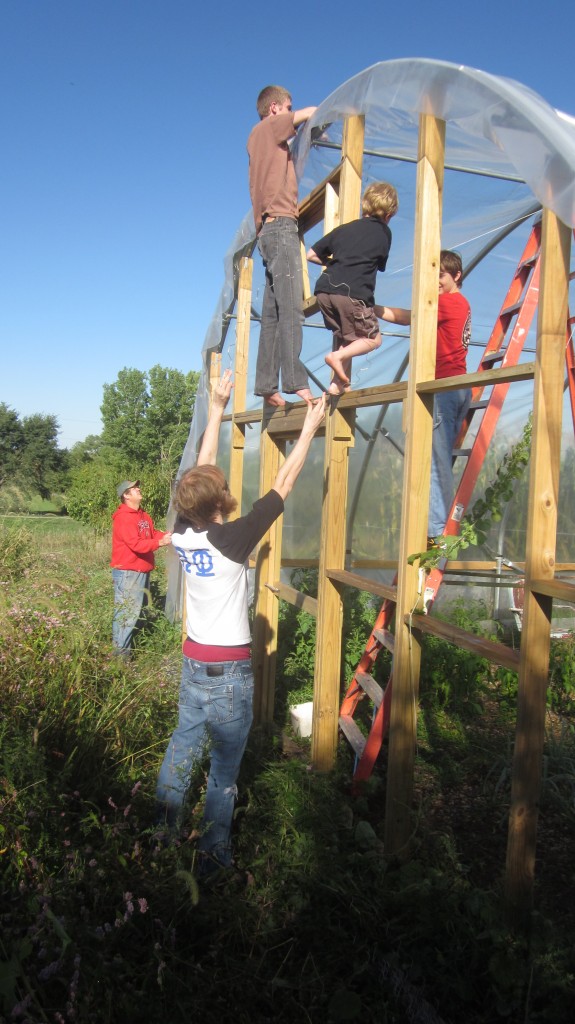 Here’s most of the “village” at the far end, guiding, pulling, joking, climbing-for-no-apparent-reason (that would be my little Mack). Here’s part of the crew on the north end making sure the poly is in place. Timothy (at the far right) is beginning to apply wiggle-wire to the hip board. Here Davey and Andrew work on applying the wiggle wire to one side. Once the wiggle wire is in place, there should be no fears about all of us being transported to Iowa with a sudden change in wind velocity. Phew. Once the wiggle wire is in place on both sides, we stop and take a breather. We’ve still got to do some work on the sides, to anchor them both down to the framework, but that’ll take some time and only one or two helpers, so Bryan announced that the job is done for today!

Of course nobody has forgotten the promises of warm honey-cinnamon rolls, and some mysterious beverage dubbed “bulletproof coffee,” so we all dust ourselves off and troop into the house for refreshment.

And if you come back tomorrow (please do!) I’ll share with you my recipe for honey-cinnamon rolls, and tell you all about bulletproof coffee. Thanks for hanging in there with me as we get the poly on . . . we’re nearly finished, at last, with this project.

Oh! I almost forgot! I linked this post up with Frugally Sustainable’s Blog Hop. Come on over and take a look at all the good posts this week!

30 thoughts on “Hoop house poly-pulling part 1: It takes a village”