Last week I wrote about my pathetic craving for a chicken broth so hot and spicy, that it would sear my throat lining and make me cry. I was out running errands for about three shivery days in a row without a break, recall–at least it seemed that way–and subsisting on fast food and not enough sleep–and I had this feeling that if I didn’t make this broth that I was dreaming of, I would perish.

That broth I was imagining: if it turned out to be as stunning of a success as I was picturing, I knew that I would live. For another day. Or at least as long as the broth held out. 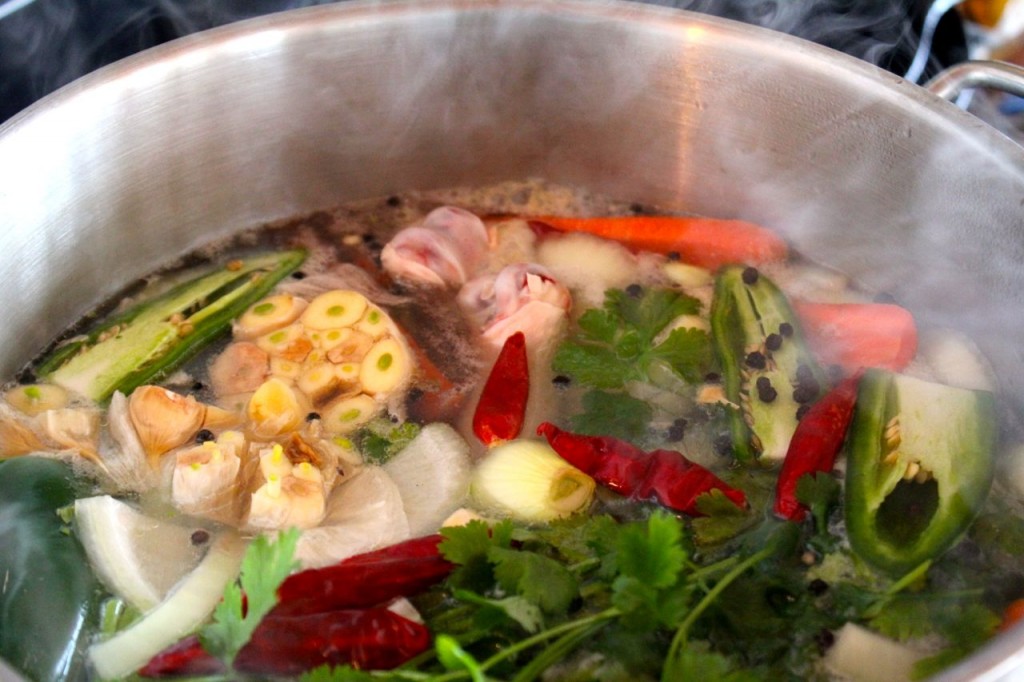 Isn’t this the prettiest broth pot ever?

Well. Perhaps that is exaggerating just a mite. In any case, still, I drove home, hauled a big chicken out of the freezer, and went right to work on the broth. Making broth is child’s play, you know, and when you are brain-dead from other things, keeping your hands busily occupied in chopping veg and tossing herbs around is such a welcome pleasure. And the process brings a lovely warmth and coziness to your home, too, with very little effort on your part. This resulting broth was a delightful, throat-burning, core-warming success.

It was exactly what I had hoped it would be. Score.

The next day, I made soup out of the broth. Just listen to how simple it was: I took the chicken from the stock-making (I de-boned it the day before, when the chicken was cool enough to handle, and then socked it into Steve, our ‘fridge),  and added it to a big pot of the broth, with a bunch of my favorite things at the moment–chunks of kabocha squash, cilantro, shredded Chinese cabbage–tossed in some goodies to give it even more heat–chipped ginger root, sliced (thinly, oh so thinly!) fresh jalapeno, chili sauce, freshly-ground pepper, sliced green onions–and tossed in chunks of avocado at the last minute just because I felt like it.

And I had a couple of avocados that needed using, truth is. 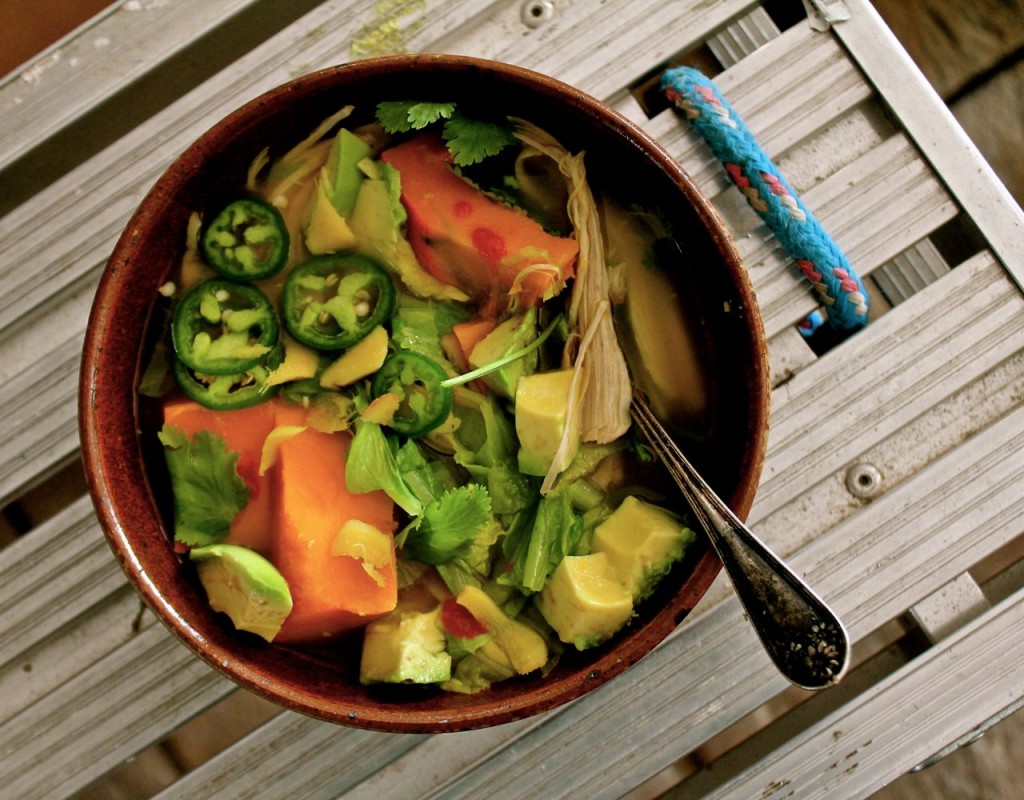 So. Good. You almost can’t see the hot broth, but it was there.

And of course a loaf of crusty homemade bread, spread thickly with butter, would be a perfect accompaniment. 🙂 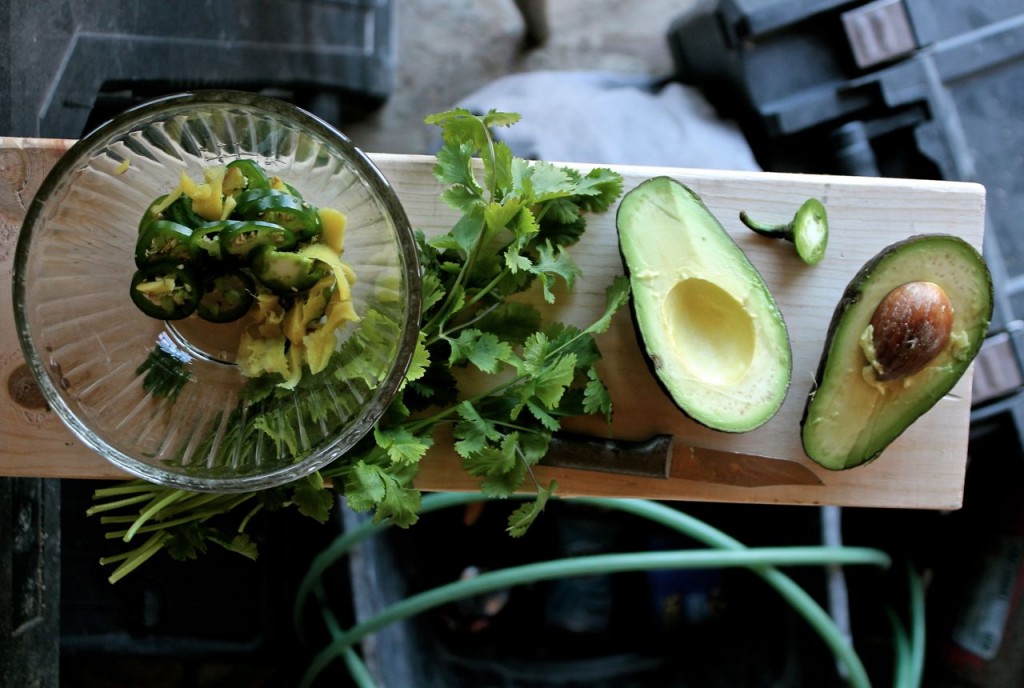 1. Put your Hot and Spicy Chicken Broth into a large stock pot and heat to a simmer on the stove.

2. Meanwhile, scrape out the seeds and chunk up your kabocha squash and add to the broth. Cook for 10 minutes or until the squash is soft. By the way, I didn’t peel the kabocha squash and the peel cooked up soft and edible. This was a revelation to me! Who knew? 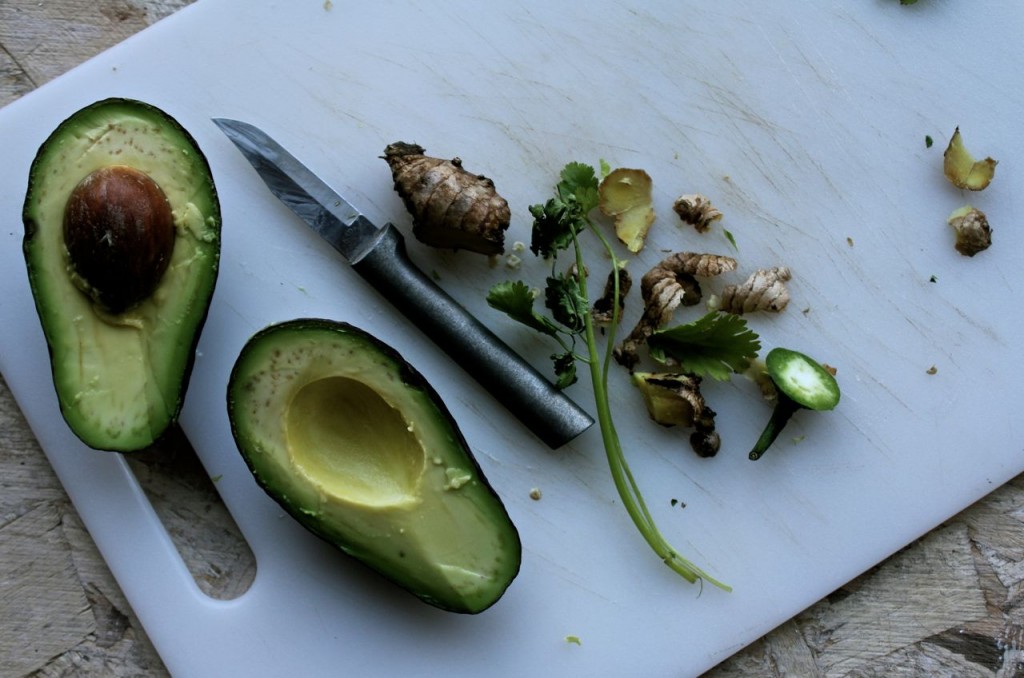 Now I’ll let you go, so you can go make your soup. Time’s a-wastin’ you know, January is nearly half over and it is–after all–an excellent month for soup. 🙂