Sit down, Gentle Readers, for just a moment. I have a chicken history lesson for you. And yes, there are pictures at the end. Let’s begin.

In the tenth century, Norsemen settled in Iceland, bringing their chickens with them (as all savvy peoples will do; what’s homesteading without a few chickens, after all?). These hardy people (and their chickens) lived in this area for hundreds of years. Over the centuries, natural selection favored the chickens that were able to feed themselves in lean Icelandic homesteads, not to mention (naturally) mama hens with excellent mothering skills. The resulting landrace of active, healthy fowl, which adapted well to harsh conditions were on the small side and had good egg production, even during winter (reference Harvey Ussery in Mother Earth News).

A bit of vocabulary in this lesson, too, from the dictionary: A “landrace” is a group of domesticated stock chosen for utilitarian traits only, not (as much breeding stock is chosen) to conform to specific breed standards, such as color, pattern, or comb style.

In other words (in Amyparlance), Icelandics are a practical, hardy, no-fuss chicken that have adapted well to living in harsh climates.

Like, erm, Nebraska. 🙂 But I’m getting ahead of myself. The history lesson is not yet over.

For a thousand years, the only chickens in Iceland were of this hardy landrace. But in the 1930s, strains of Leghorns, used for more commercial egg and chicken production, were imported. Inevitably, those chickens were crossed with the native flocks and the pure landrace was in danger of being lost. Efforts to conserve the native population began in the 1970s. The success of those efforts was followed by importation of these genetically priceless birds into other countries, including the United States (again, information adapted from Harvey Ussery).

And today, you know, among many chicken-loving folks, these priceless landrace chickens, Icelandic chickens, are a thing. Chicken keepers and breeders all over the country–not that many yet, mind you, but more than a few–are raising Icelandic chickens and selling eggs and chicks from their own farms.

Icelandics are still relatively unknown in the U.S., and you probably won’t find them at the feed store or in a commercial hatchery catalog any time soon. But there is a Facebook group dedicated to Icelandics, and if you want to learn more about them, this is a great place to meet breeders and ask questions. The members are an enthusiastic and helpful bunch, and also are passionately devoted to keeping this landrace pure and unchanged.

They are kind of an Icelandic chicken pep club, but with stricter bylaws. 🙂

I first read about Icelandic chickens when lots of other folks in the U.S. did: when Harvey Ussery’s article about them was published in October 2014 in Mother Earth News. I started longing to have my own flock right away, and I found a breeder who lived not too many states away and asked to be put on his waiting list. I knew how in-demand these chicks were, and I honestly didn’t expect to get them the first year. I figured I’d be on the list for a couple years before my name came up.

I made plans to detach my heart from my current batch of roosters and old hens, at least eventually. But I didn’t hear anything from the breeder, though spring moved inevitably into summer. But that was okay. I had my dance card quite full for the summer, with a big garden planted, a home remodeling project started, Bethany’s wedding to plan, lots of wedding company and other things to look forward to. I planted a few heirloom tomato plants, as usual, for example. 🙂

Then came an email from the breeder: “I have openings in June, would you still like chicks this summer?” I hesitated just a moment, because with Bethany’s wedding coming up in just a few weeks and whatnot, I knew it would be prudent of me to wait until the fall, or even until next spring. Then a couple days later, another email: “I’ve got openings this week–could you take chicks in a couple of days?”

How often do I choose the most prudent course, Gentle Reader (cough)? Don’t answer that. Let’s just say that “sensible” is not my middle name. Or “prudent.”

So, after I did a few breathless cartwheels around the yard and some crazy happy dancing, I emailed him back: “Yes! Yes! I’ll take them!” Since I hadn’t received chicks from the spring hatching, I already had set my sights on spring of 2016. So I got the stock tank in the garage ready for my very own Icelandic chicks. I reminded myself to breathe. I pinched myself. Nope. It wasn’t a dream. I was going to get a box of Icelandic chicks in the mail in a couple of days. I couldn’t believe it!

She didn’t have to finish the question. I was in the car and heading in to town.

It still amazes me that day-old chicks can survive being mailed in a small box, being without additional heat or food or water for two and sometimes three days, but somehow it works very well. Actually I’m really glad that I didn’t wait the three hours for the mail carrier to bring the box of chicks out to our place on his regular route, because two of the chicks were very weak and I don’t know if they would have been alive several hours later.

But they perked up, given some heat and water and a bit of food. 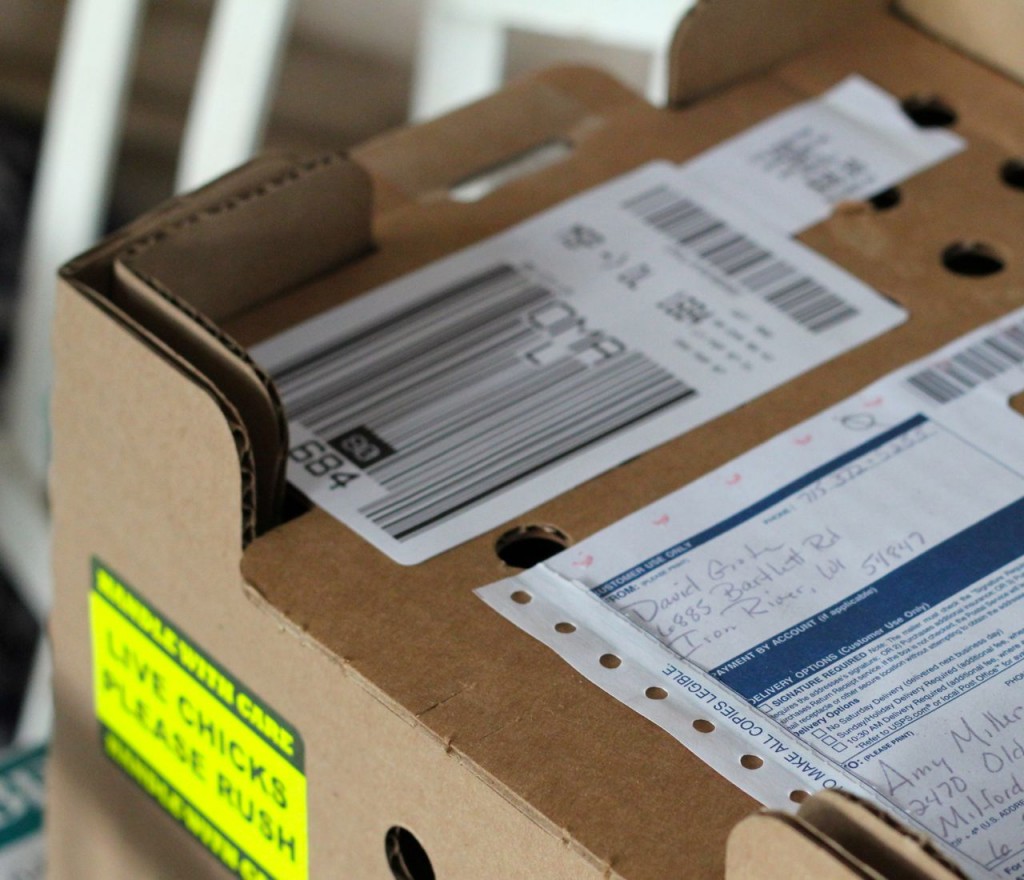 It’s so important to get these frail little babies under a heat lamp and ingesting water and food as soon as possible, so we didn’t delay. 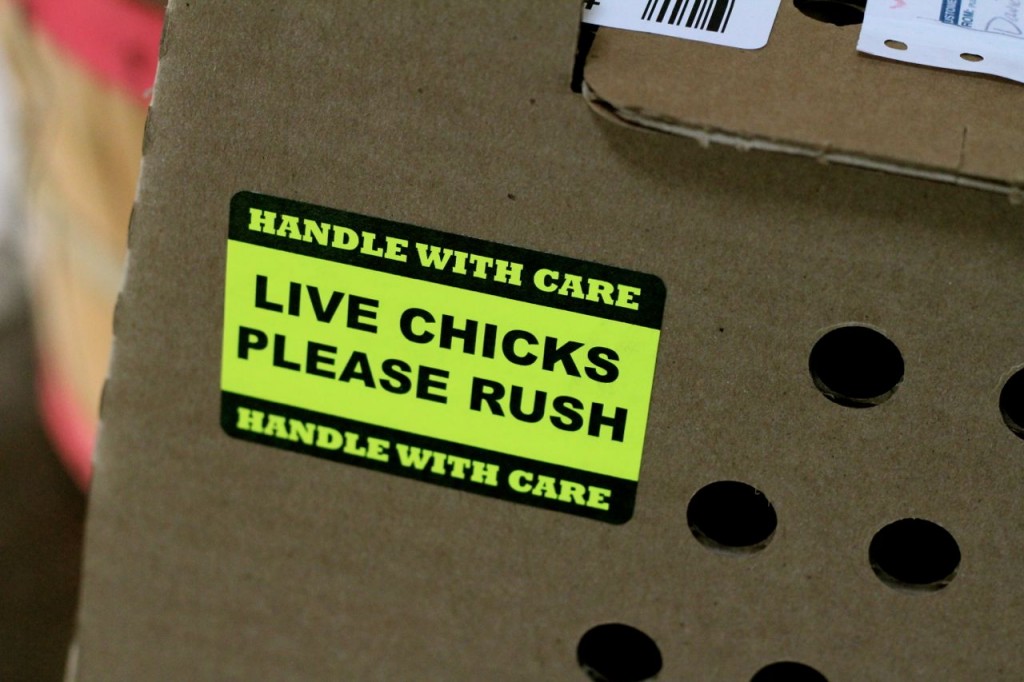 Well, just a minute or two to take a few pictures first. 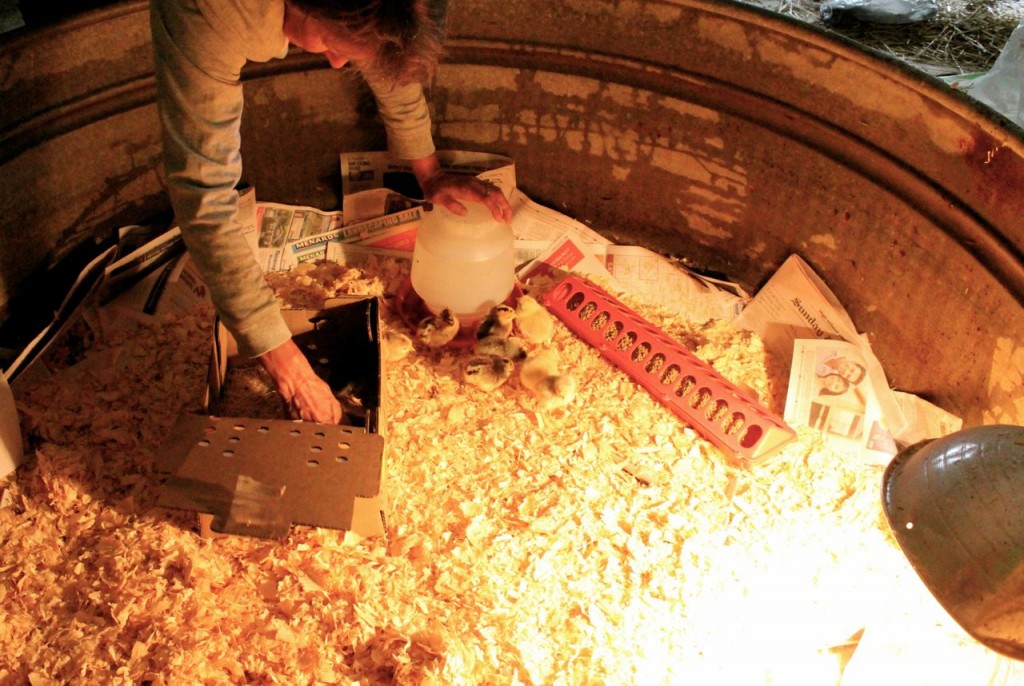 I took the chicks out of their shipping box one at a time, making sure that each one knew where the water was, carefully dipping their beaks into the fresh water one by one. 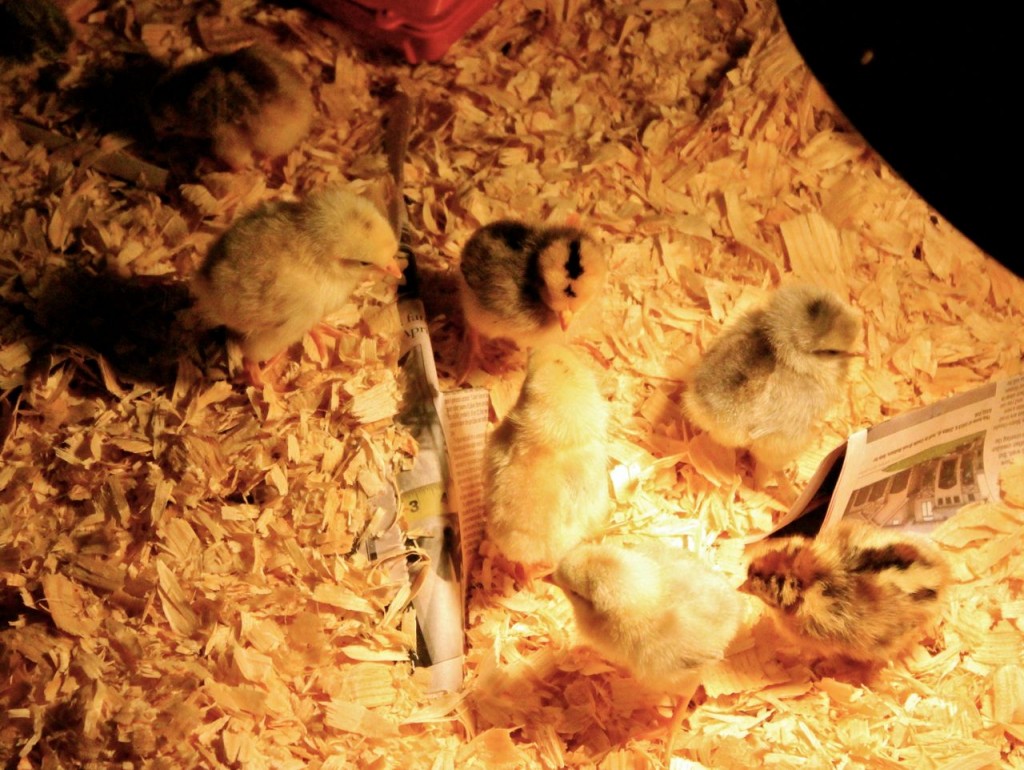 Then we sat back and watched. 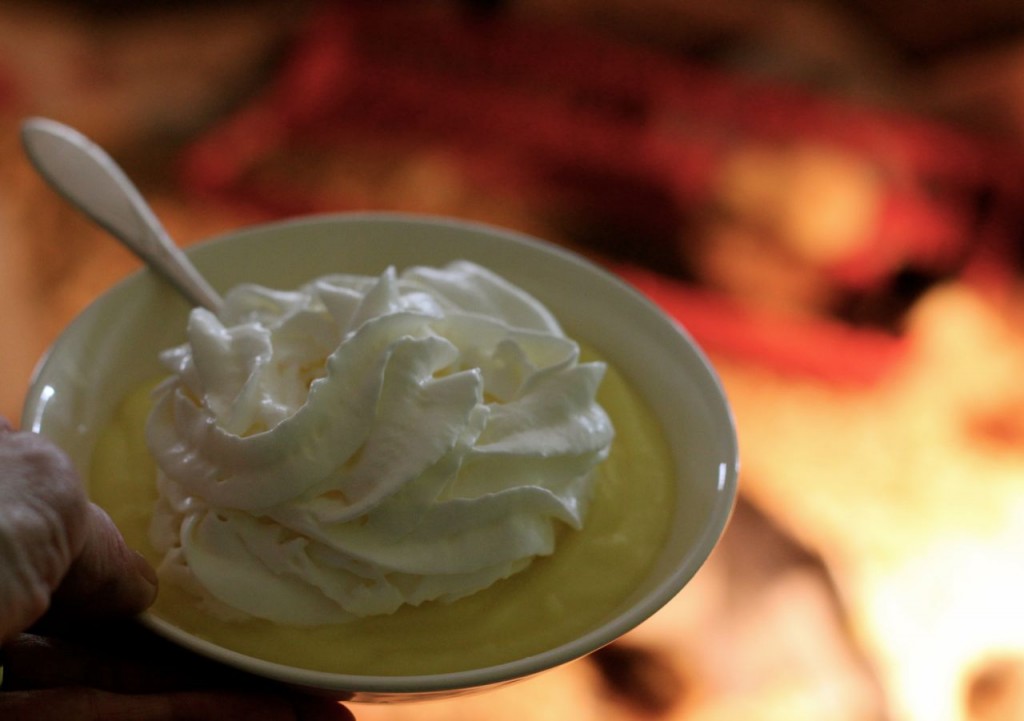 I sat watching the babies so long that little Mack made breakfast himself, and even brought me some: lemon pudding with whipped cream! Indulgent breakfast of kings. Or, of a little boy alone in the kitchen. 😉 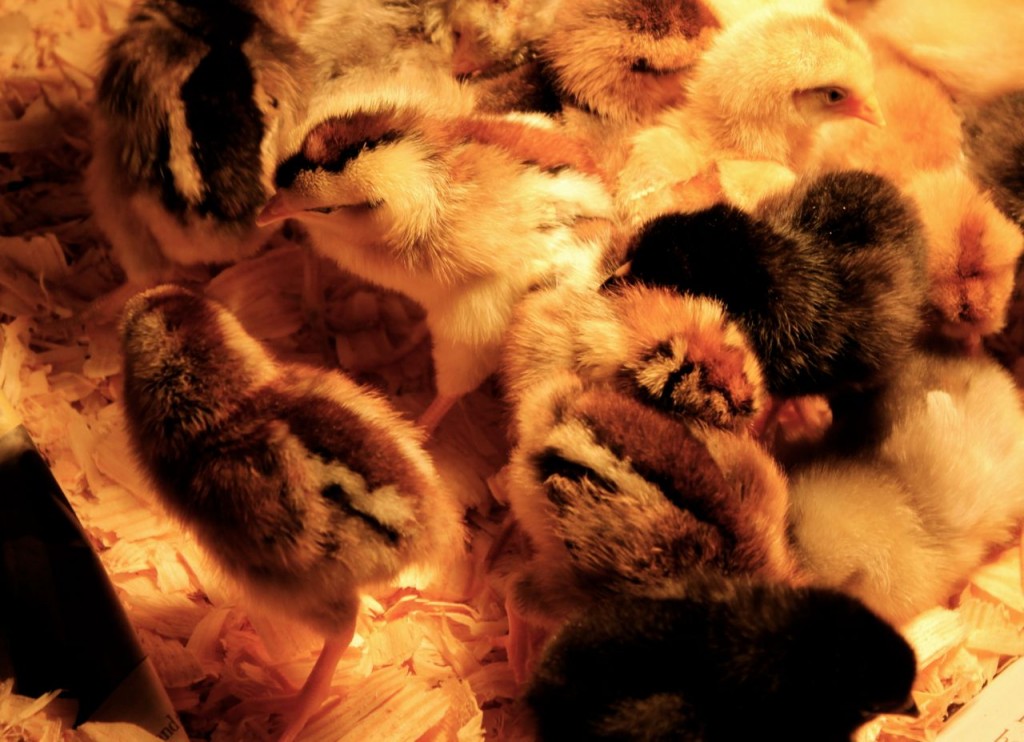 I took a few portraits the next day, when the chicks were well on their feet and rested from their journey.

So there’s my first ever post about my new adventure in chicken-keeping: raising Icelandic chickens!

Come back next week for the second installment, when you learn why we call our kitten Lolo “The Best Kitten in the World”! (And yes, it does have to do with the chicks, and her not eating them all en masse one night when she had the opportunity.)

By the way . . . have you signed up for my email list yet? You don’t wanna miss a thing, do you? Then (for pete’s sake!) sign up, baby, in the box in the upper right hand corner. Let’s do this thing!

14 thoughts on “Icelandic chickens at our place, part 1: Chicks in the mail!”