I find myself nearly breathless, facing as I am the span of all the BIG THINGS that have occurred at our place since I’ve last been able to share in this space (we had internet problems for nearly a month!): a wedding, a new grandbaby, new Icelandic chicks, kids moving out, kid moving home and then moving out a month later, new crops in the garden, overnight company, a trip to the butcher with the meat chickens, a trip to St. Louis and back, and the messy beginnings of a too-long-put-off-for-later home remodeling project.

So. Much. I hardly know where to start in the catch-up department! Probably the best thing to do would be to just jump in without overthinking it, so that’s what I’ll do. 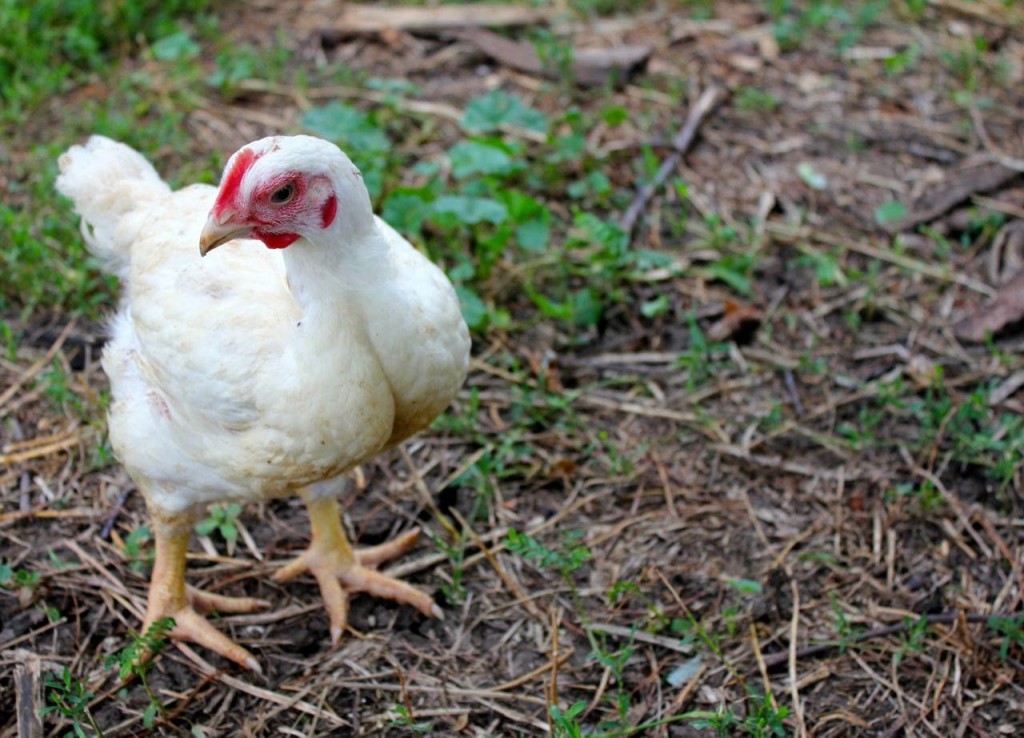 I’ll start with the new chicken tractor that Bryan and Mack built for me earlier this summer: a “very good place to start.”

I wish you could see it! I found a picture of one that I liked the looks of online, and I showed it to my good husband a few months ago. Bryan was super busy at the time, but I know how he likes new building projects (not making that up, honest!) and that he would eventually find time to make one. At least, that was my hope.

He also likes a good roast chicken, as a matter of fact. 🙂

I mentioned offhandedly to Bryan that if he didn’t get to it this year, I was willing to wait another year to raise a bunch of Cornish Cross (meat chickens) for the freezer. (I was so unselfish, I didn’t recognize myself.) That’s what I had decided in advance, being the patient and not-pushy wife that I am (cough). And since Bryan is, at any time, trying to keep at least six plates in the air at the same time (employment-wise) I decided not to hold my breath on this matter. I girded myself to be patient. And sober-minded. And not selfish. And to be content with the last few stew chickens in the freezer, until next summer. Better than nothing, right? And “not looking to your own interests but each of you to the interests of the others”ish. (Phil. 2:4)

Yep. That was me, in a nutshell. You would not have known me.

Until that day in the feed store. Some wild and careless ne’er-do-wellishness in my subcharacter (that instinctive bit of you that cannot be denied) pushed me (yeah, I just made that up–like it?) to buy the very last 45 Cornish Cross chicks of the season (the weary worker there agreed to give me a discount for taking every last chick they had left, and I had pity on her, and I got two Buff Orpington pullets in the bargain, which I consider a real plus).

On the way home from the store, the chicks peeping from their box in the back seat, I formulated my strategy: they would start out in the cow-tank-turned-chick-brooder in the garage, as usual, and please don’t ask what I was going to do with them if the dear overworked hubs didn’t pony up with the new chicken tractor. ‘Cause I didn’t have a plan. But I knew that one would come.

That is the nice things about impromptu plans. They come. Just when you need them. With luck.

I haven’t raised any of these intrepid birds for a couple of years now because our old chicken tractor model–a flimsy contraption (for which I was grateful, in its day) made of PVC pipes and chicken wire, had gotten too delicate for me to feel good about using it any longer. Also, it had fallen apart in so many places and then repaired with plastic zip ties (no kidding, we are resourceful, I’ll give us that) that the last summer I used it, I nearly couldn’t sleep at night because I was so worried that an enterprising ‘coon or a weasel or a skunk or an o’er large beetle or something would happen by and discover how inadequate it was, and would invite all its friends for an all-night feast, and I’d be sunk, sunk, sunk.

And my dear chickens–my year’s worth of excellent meat–worst yet–would be inside predators’ bellies by morning.

You know, I just hate it when that happens.

Well, it never happened, but after I used that piece of equipment that summer, I parked it in an out-of-the-way spot, never intending to use it again. It was too much of a peace-kill. I desire peace, especially when I’m sleeping. I try to avoid things that cause me anxiety. Which is a pretty funny statement, if you knew what our place has been like this summer. Ha!

Bryan and little Mack did build a new chicken tractor for me, just in time too, just when the Cornish chicks couldn’t take another day in the garage brooder. *Phew*  That was a close one! Once you discover how pleasant it is to have a year’s worth of big roasting birds in the freezer, grown on the feed that you choose, raised in a humane way that (for me) means fresh grass and dirt and bugs and sunshine, you may find it a bit distasteful to go back to buying the chickens at the grocery store. Basically, you just go without. I know you can buy birds from local, small farms, too, but they are expensive (for good reason!) and if I can raise something just as good here at our place (and happily, I can) and save money at it, why not?

Plus, you know how I love chickens.

Back to the chicken tractor. I had just a couple of really solid requirements to this new chicken tractor. First of all, I wanted to be able to walk into it. I couldn’t do this with my old one, which was only knee-high. That made the daily feeding and watering and so forth pretty inconvenient. Secondly, I wanted it sturdy enough that I wouldn’t lose sleep over it. Thirdly, I wanted enough space that I could easily raise 50 large meat birds, and that they would still have plenty of room to move about. Last, I wanted to be able to move it fairly easily, so my birds would have fresh grass and bedding every few days.

Bryan built the new tractor in two pieces. It took him most of a weekend to build each one, with help from little Mack and me. We used the first one for a couple of weeks, until the chicks were getting a bit crowded and he had time to make the second piece.

The new tractor meets all my hopes and dreams. I just love it, and I think the chickens are okay with it, too.

The only thing I’d change is to somehow make it easier to move . . . it does take three of us to move it*. Four, if you count—well, actually, five, if you count Ollie and Bea, who keep the chickens from moving too far away, and herd them all back in when we’re done moving it. Wanna see it? 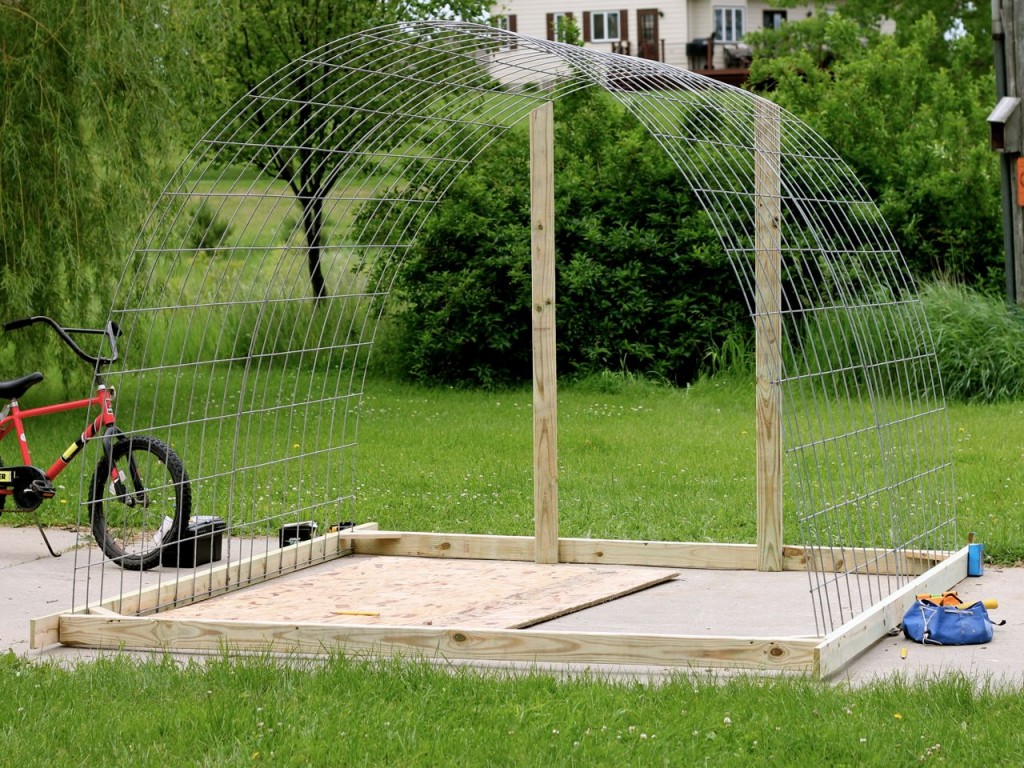 Here is the beginning, simple construction: two large hog panels and some boards. The framed-in section on the far side will be my door. I’m not sure why that piece of plywood is lying there.

These triangular supports on the corners are very important, because: physics. 😉 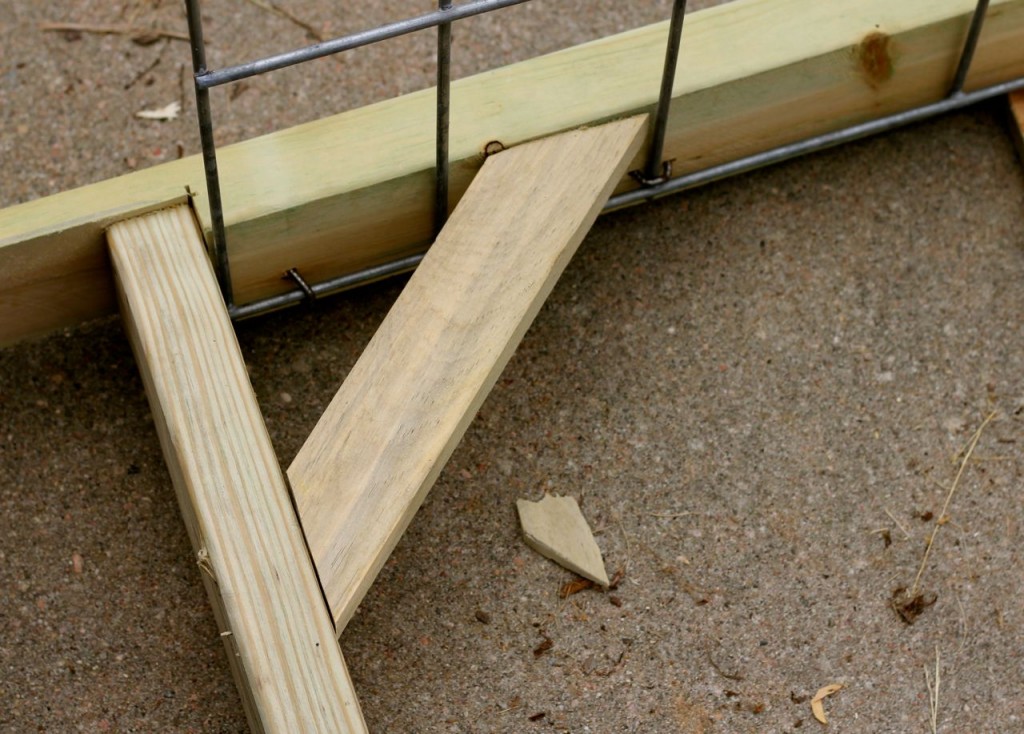 Here’s the first section, completed. We threw the tarp over the top to provide shade, and some modicum of predator-deterrent, too. It is firmly zip-tied to the hog panels. Note the wheels, which we hoped would make it easier to move. 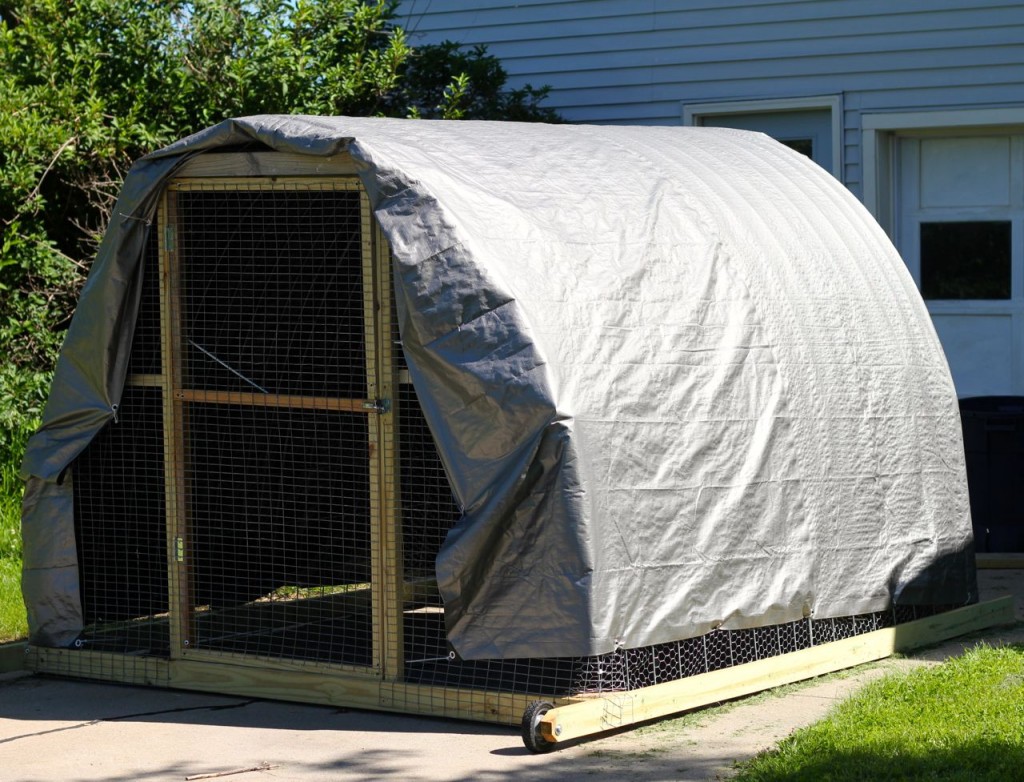 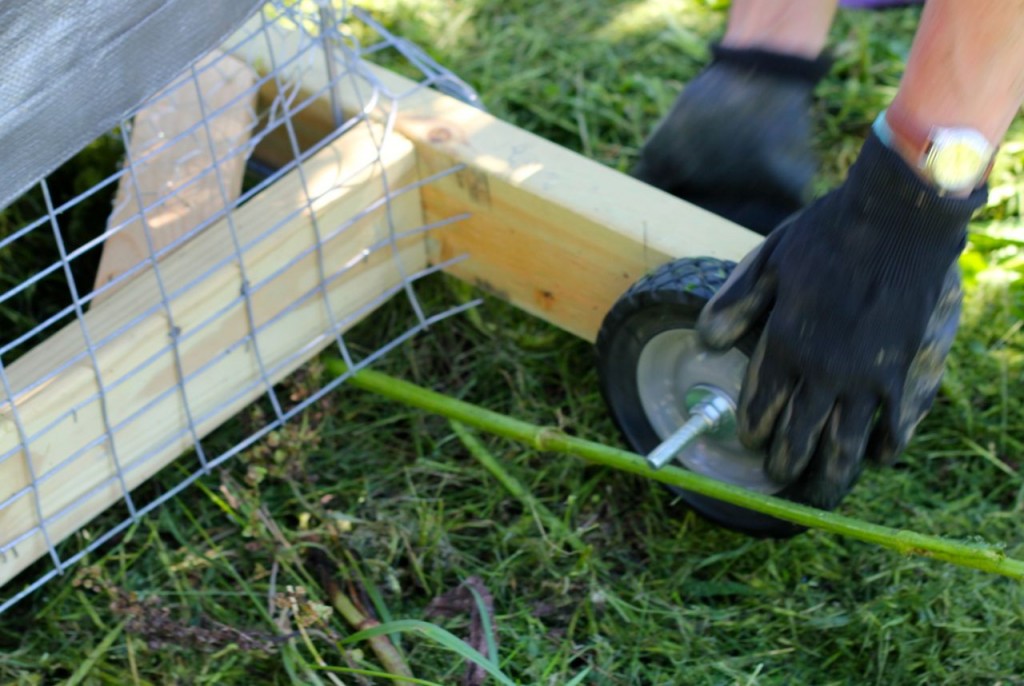 close-up of the corner

This first structure is light enough that Bryan can move it himself, while little Mack yells encouragingly and I snap photos. 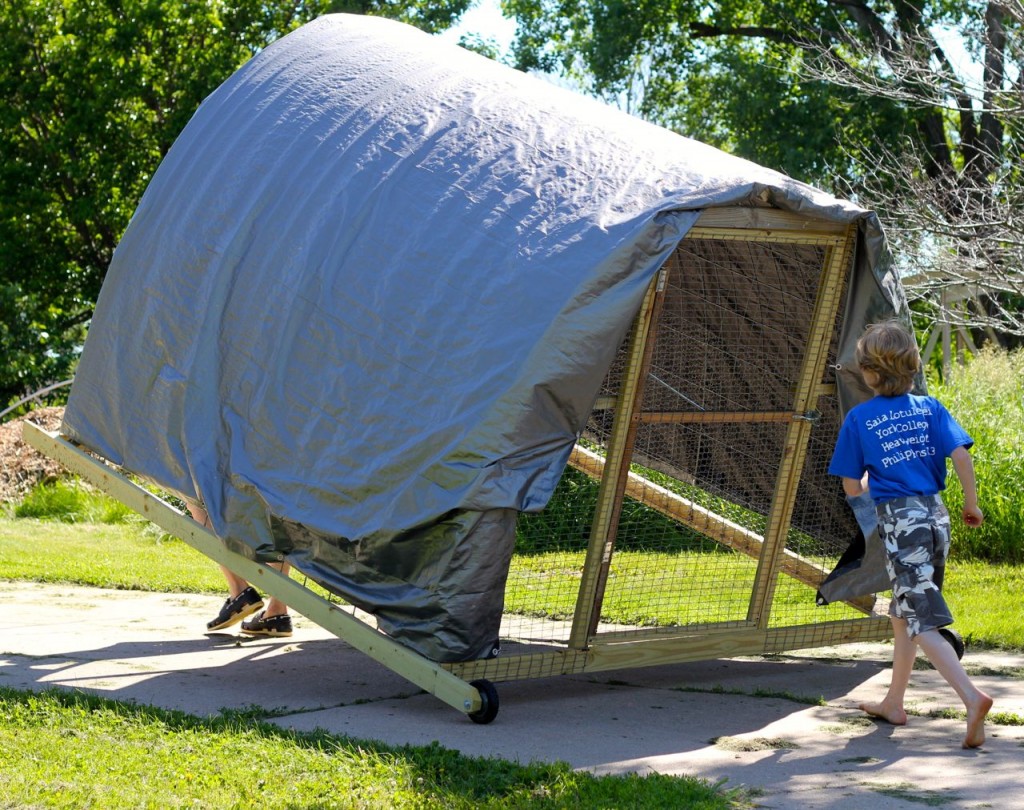 Here’s the view of the back wall, which–once the second segment is attached–will be opened up (just the small square at the bottom) so the chickens can pass between the two segments. As soon as we got the first section in place, we added some straw for bedding on one side, and then hauled the meat chicks out to inspect their new digs. They seemed pleased, if a bit confused. 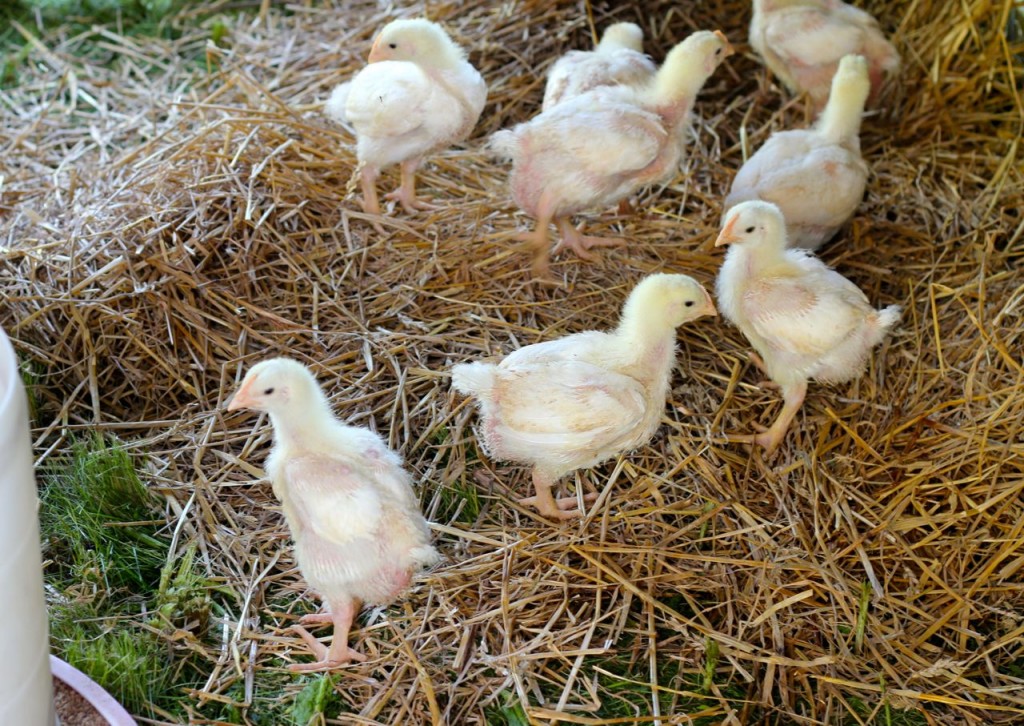 Our Aussie, Bea, was very excited about this development, and ran around and around the tractor, but Ollie took the change in stride. 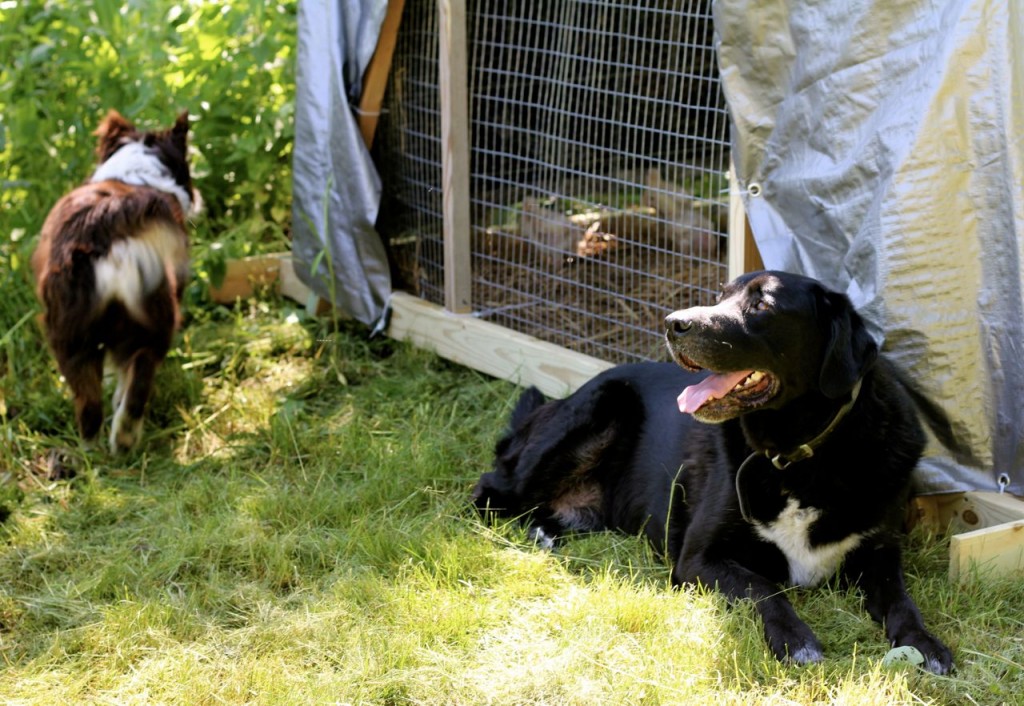 We let the chickens grow for a week or two before we added the second segment. Plus, it wasn’t finished until then. 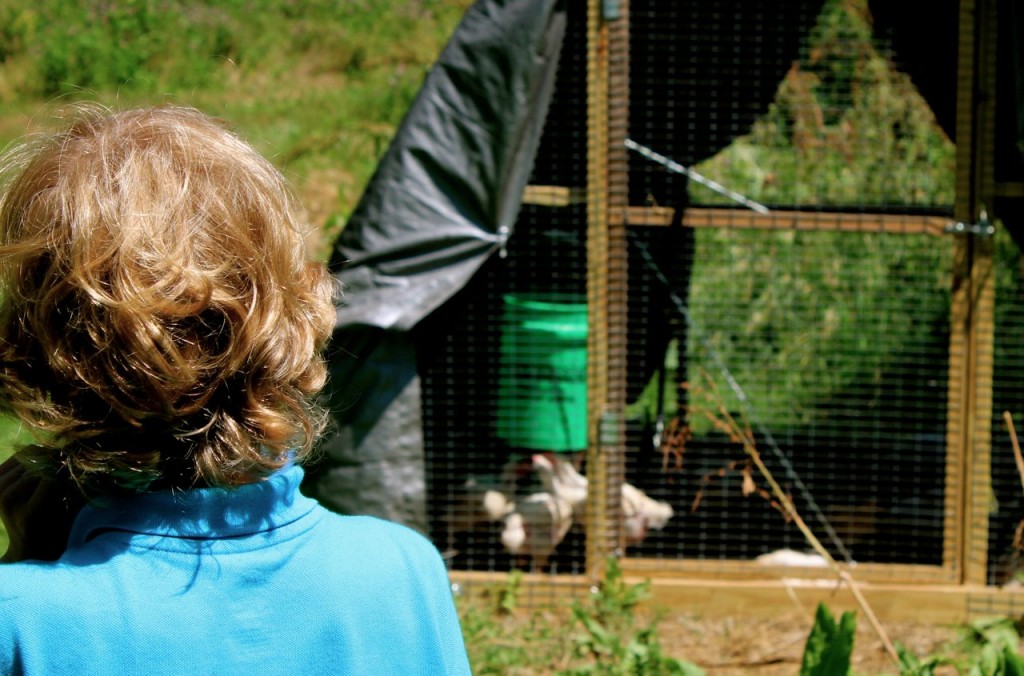 Bryan pulled the second, not-quite-finished section out to the chicken yard with his tractor. The second segment is now attached to the first one, and the chicks are getting big. They can run from one side to the other as they please. We moved the tractor every few days, but it was a big job: we had to disconnect the sections from each other, and then Mack had to watch that we didn’t run over any chickens, while Bryan and I scooted it to the next place. Then I had an idea: what about just opening the door in the morning and letting the chickens out to free-range? It was risky, I knew, but I wanted to know.

And whaddya know? Meat chickens act like “real” chickens when you raise them like real chickens. Did you know that they are enthusiastic foragers? (Of course they do take frequent breaks, too.) 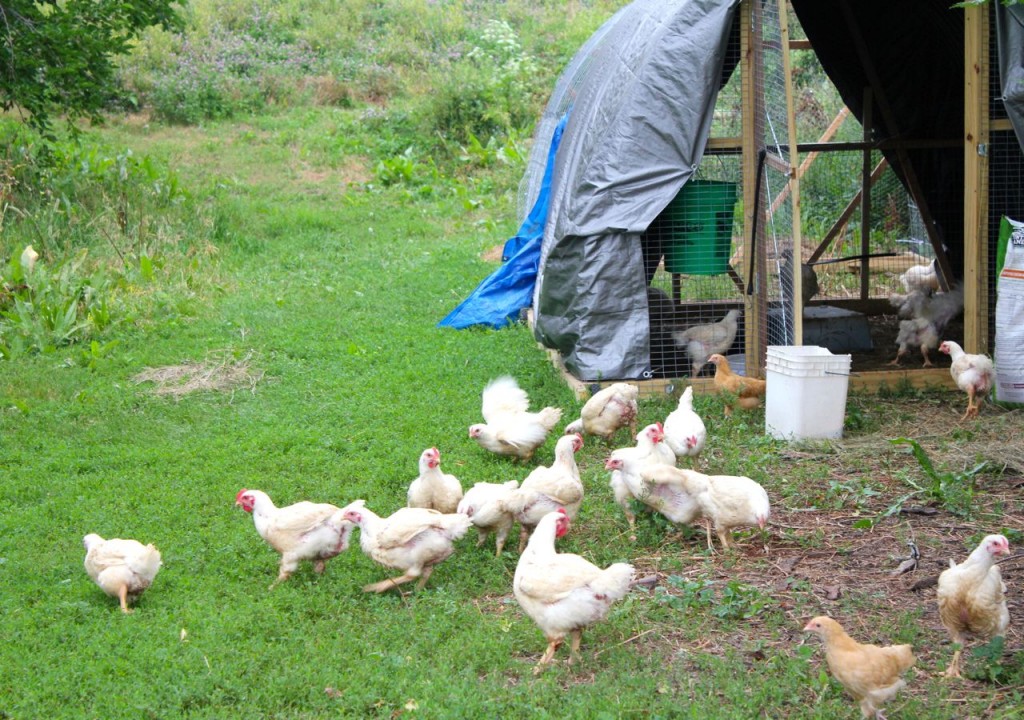 I was thrilled to pieces to let these birds out every morning and watch them go. Of course they are still very food-focused and they’d fill up at the feeder every morning, too. I’m writing a post about what I’ve learned about raising meat chickens, by the way, so you might want to check back in a week or two for more. By the way, I’m already thinking of all the other things I can use this dandy structure for, once the Cornish Cross chickens are in the freezer.
For starters, I plan on using it for:
There. Of the 452 things I have to share with you about this summer, one–thing–down! I love ya, Gentle Reader. Thanks for hanging in there, and checking in with me!
*hugs*

17 thoughts on “My New Chicken Tractor: brand new digs for the meat chooks!”