Frost is forecast in our area of Nebraska for tonight, so this morning little Mack and I headed out to the garden to do the last picking of the delicate crops. Poor Amalia was under the weather and missed it all. It was overcast, windy, and cold and Mack and I both  would have rather been sitting indoors next to the wood stove, reading our respective  good books and sipping hot cups of tea, but no. There were lots of tomatoes, peppers, and basil out there that would likely perish this very night, so out we went.

I used to do this final picking in a very thorough manner, picking every single last tomato, ripe and juicy or hard and green–I wasn’t going to let a single thing go to waste!–and every single pepper, no matter how immature or snerly, then I’d carefully squirrel them away someplace dark and cool, and then immediately forget about them until one of the kids would remark one day in early spring that there was a box of rotten tomatoes in the basement, and that it was starting to stink, too (oops).

But now perhaps I value the fresh garden pickings more than I used to, and also I’ve learned a few things over the years. I follow some self-made guidelines for picking and storage, to wit:

And the peppers? They can be left in a cool spot, too, and left to ripen if they aren’t yet the color that you were hoping for. But keep an eye on them, too, lest they succumb to bugs or whatnot and turn to the Dark Side. 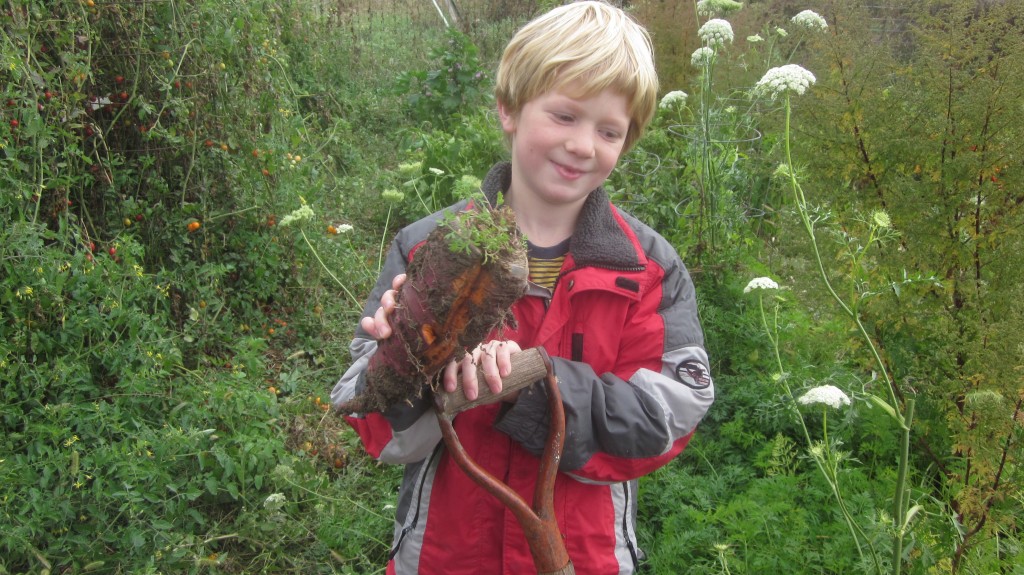 Here’s Mack with a giant red carrot. Should have dug that one a few weeks ago . . . (oops)

I asked little Mack to come help, and handed him a bucket. He’s built nicely close to the ground, after all, and there are lots of cherry tomatoes down on his level, and since I learned all about lycopene, I wasn’t going to let them all go to the chickens, for Pete’s sake. “Fill up this bucket with cherry tomatoes,” I said sweetly, “and then you may go.”

Now just a quick note: there is this mistaken notion floating around that my children never misbehave. Pardon me while I clean up the bulletproof coffee that I just sprayed all of the computer screen (not really, honey, relax). Here’s anecdotal evidence that my children–especially this particular one–are just as ornery and stubborn and sometimes even as difficult as anybody else’s, bless them.

And you can quote me on that.

Mack complained and groaned and kicked his toe into the mud (it had rained the night before). “I don’t want to pick tomatoes,” he said, “I want to go ride my bike!”

I fixed him with a steely stare. There were hundreds (perhaps thousands) of cherry tomatoes hanging right in front of his nose. This was the easiest chore that I could ever ask him to do. I wasn’t letting him out of it. I knew that I had to outstubborn my stubborn son. Not an easy task, but I was having a good day. I was up to the task.

“Fill the bucket,” I reminded him “and then you can go ride your bike. Stop complaining now, and start picking!”

I stripped handful after handful of cherry tomatoes off the vine. Mack moaned and sighed and cast longing glances at his little bike, just on the other side of the garden fence.

“Plink . . . .” went a tomato into his bucket. After about twelve seconds, I heard him let out a moan. 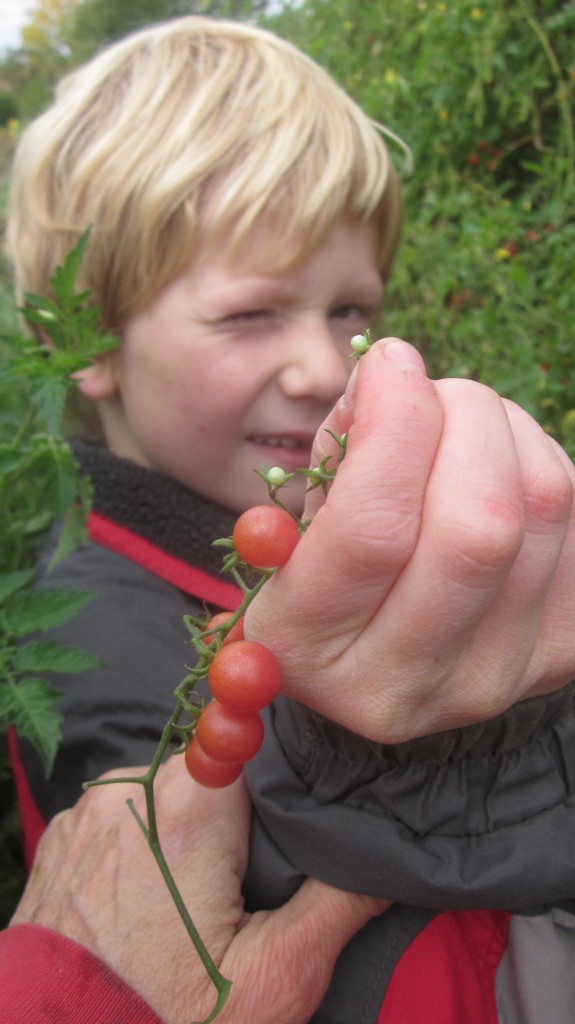 “Mommmm!” he moaned. “It’ll take me FOREVER to pick a bucketful of THESE!” Of course my son had found the tiniest spray of the tiniest currant tomatoes in my garden and was picking them. What a cheeky lad.

“For Pete’s sake, don’t pick the tiniest ones you can find,” I chided him, “there are plenty of bigger ones than THAT. Pick the big ones!”

But his moaning didn’t stop, and his picking didn’t resume.

“I’m cold. It’s windy! I’m . . . so . . . . so . . . hungry!!” he moaned, piteously. I turned my deaf ear towards my cold hungry windbeaten (stubborn) little boy . . . and walked to a different row of tomato plants, thinking that if he wasn’t right next to me, he’d put his energies into picking tomatoes and not into fabricating new things to complain about.

And that’s when I spotted the dead opossum.

Then the mood of the picking party turned. The sun came out. The wind stopped its tireless journey across the plains. All yawning hunger was stifled. We found a dead opossum.* The day would be a fine one, after all. 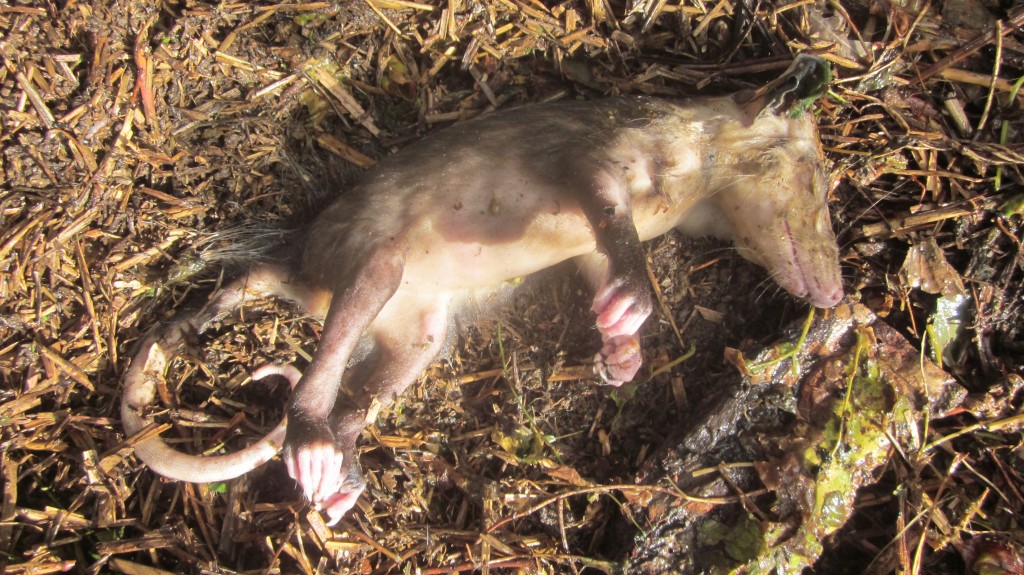 A baby opossum sports a pinched face that only a mother opossum could love. Or a 7-year-old boy.

A young opossum had drowned in a bucket of rainwater. From the looks of things, we decided that he had perhaps been leaning down, down, down for a drink, lost his footing, and then couldn’t get out. Because we regularly trap opossums here at our place, and I’ve actually found one, more than once, in the chicken coop with a dead chicken in its mouth, we’re not fond of these overgrown rodents here. In fact when we were having our summer-long tussle with the Dreaded Varmint last year, it was a big (very well fed) opossum that we finally caught in our live trap.

But it always makes me sad to see a little baby of any species, dead. We pulled the little guy out of the rainwater and studied him for a time. We both felt a small measure of sadness over his untimely demise. We took pictures.

“Maybe this day won’t be a total loss, after all,” said my reluctant tomato picker. “It’s pretty cool to find a dead baby opossum, huh? Sad. But cool.”

I agreed. Then we both went back to picking, and Mack chattered happily while he filled his bucket. Most of the way full, anyway. It’s pretty amazing what that little dead opossum did to his spirits. Don’t ask me why. Please don’t ask me why. 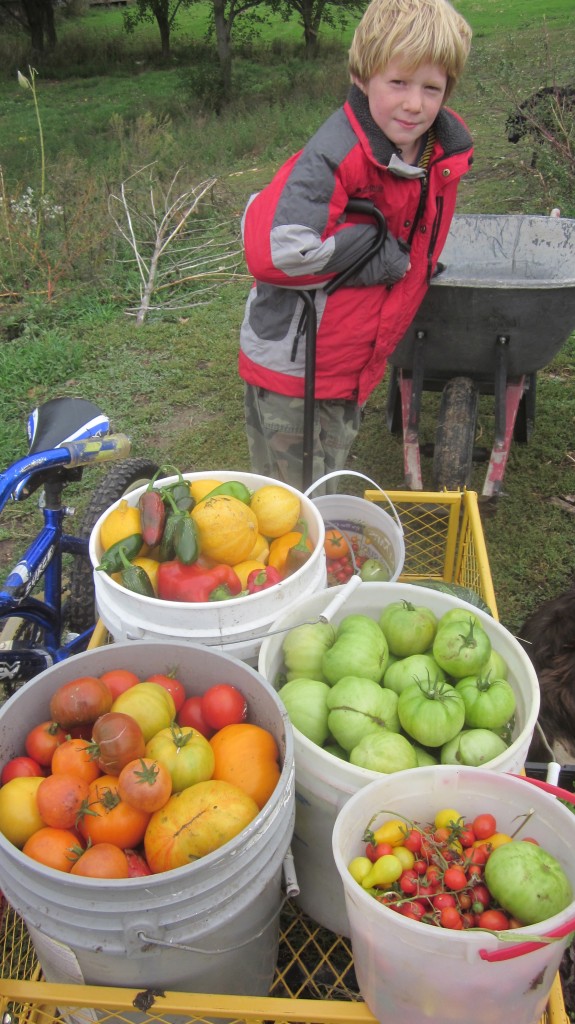 Here’s most of our last pickings: summer squash, peppers of every color and variety, green tomatoes, ripe tomatoes. Note the proximity of Mack’s bike.

Oooh, these are so good you’re gonna want to go out and strip your tomato vines, frost coming or no, just so you can make them! 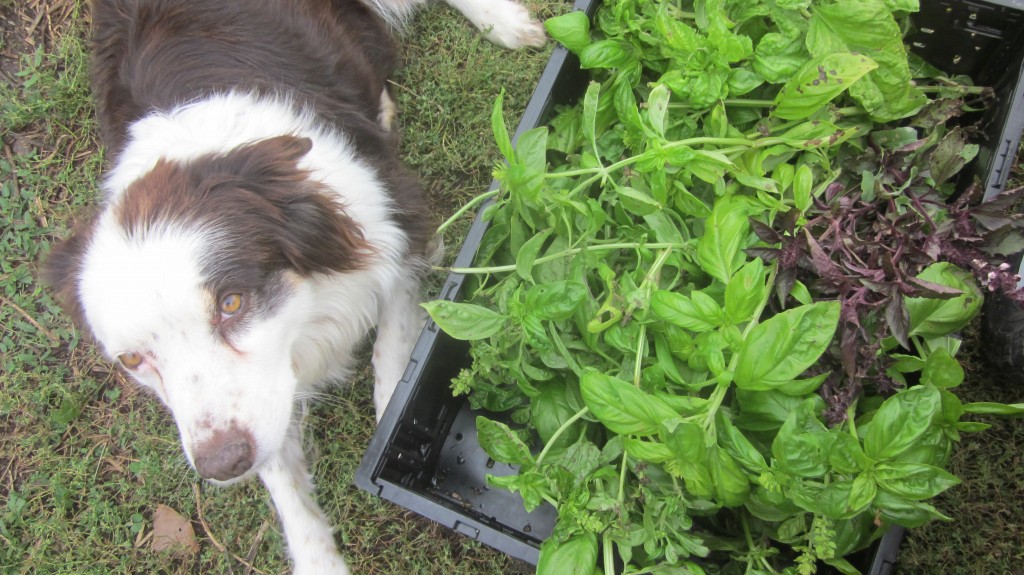 Here’s Bea and a nice harvest of basil, which I’ll make into pesto for the freezer this week. She’s pouting because I won’t let her chew on the baby opossum. 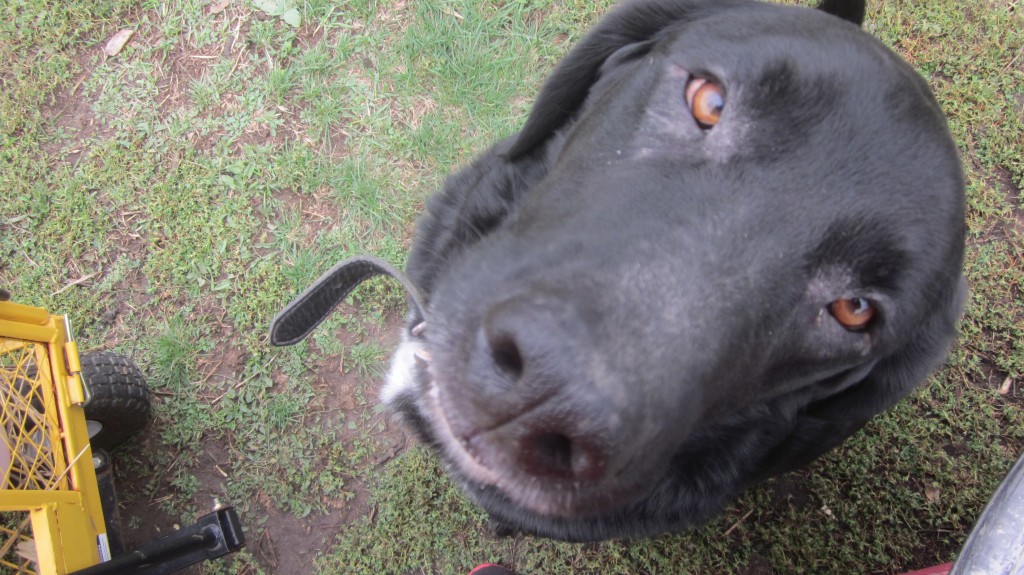 For all his faults, Ollie really excels at proving his love for his ma. Me, that is. 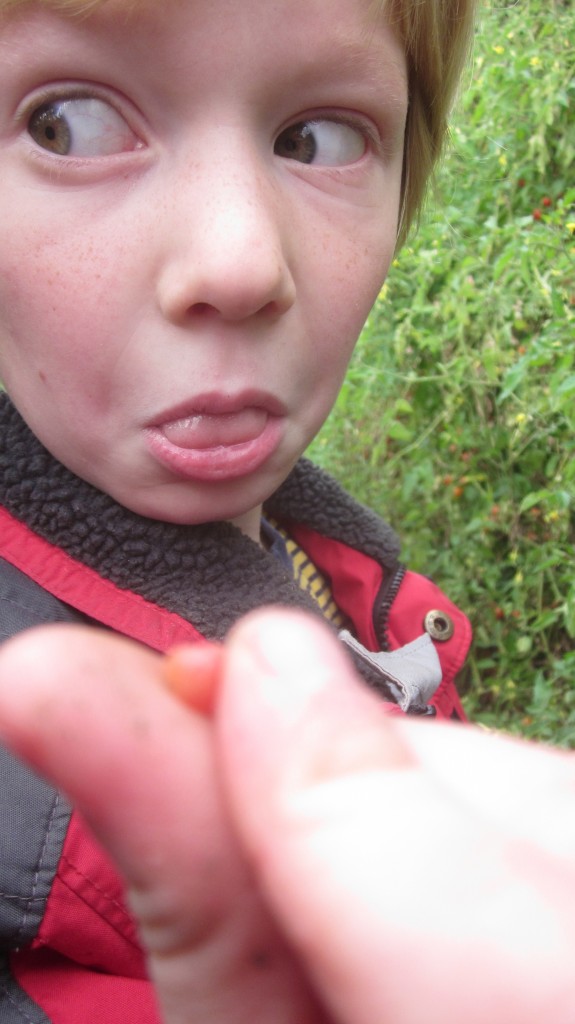 This was BDBO: (before dead baby opossum)

I’m linking this post up with The Prairie Homestead weekly Blog Hop! Come on over! Also I’m joining up with Frugal Days, Sustainable Ways Blog Hop.

Tagged on: fried green tomato recipe, what does a baby opossum look like?, when to pick tomatoes and peppers