I read a few things over the weekend that indicated that there are people who think that the strong trend towards homesteading that has been so popular in America during the past few years, has hit its peak.  Is it losing popularity as modern-day homesteaders encounter difficulties, setbacks, or even disaster?  Last year’s drought might have done it for me, if I weren’t so fond of this lifestyle and our little place in the country.  But if we would have hung up our straw hats, say, and moved to a neat little place in town, after last year’s awful experience, we would have missed out on this year . . . and this year has been gloriously fruitful.

Peaches recently picked from one of our trees are almost too pretty to eat! Almost . . .

The homesteading passion runs pretty strongly in my veins, for good reason. My own grandparents, Grandpa and Grandma Young, got their start in farming when their parents took advantage of cheap farm land in Nebraska around the turn of the century. Many pioneers to this area got their start because of the Homestead Act of 1862, when the government gave away tracts of land to anybody crazy enough to move out to this untamed (and still populated by natives, not all of them friendly) Nebraska territory.

My mom grew up in a family of modest means, and her mother (my Grandma Kuehner) I remember was very thrifty and conscious of using food that grew wild all around her. I thought it was pretty nifty, when we were kids visiting her, that she regularly cooked wild foods such as dandelions, wild herbs, milkweeds, lambs’ quarters, and so on.  I thought it was creative of her, but she was just doing what she had learned to do as a bride of a very poor Lutheran pastor husband, I would imagine:  feed her family as healthy as she could without spending much money.  Or any money, some months.  She raised a garden every year, and planted fruit trees (which bore plenty of fruit, too!) from seeds saved from the fruit that she and her family ate.

Now that’s frugal. Even the seeds didn’t go to waste.

My grandparents on both sides were living the homesteading life way before it became a popular trend.  Before there were bloggers to share ideas and methods and struggles and successes.  Before there was electricity and running water everywhere, for pete’s sake.  Nearly everybody was a homesteader in those early days of the settling of our country.

My own Mom and Dad still live their lives this way:  though they getting close to their 80th birthdays, they still split and haul all their own firewood, and they produce and preserve large quantities of their own food.  It really bothers my mom to walk past a neighbor’s fruit tree and see rotting fruit on the ground beneath it.  It could be canned, or frozen, or dried, or made into pies.  I especially like the pie option.  Apple fritters are delightful, too.

Ooooh.  Apple cider donuts! (Mommmm . . . .!) I’ve known this lifestyle for as long as I can remember.  Why, we (reluctantly) played host to a very large catfish in our bathtub for weeks, just so Dad could fillet the thing and Mom could tuck those fillets away in our freezer, for wintertime eating.  Of course that’s another story. 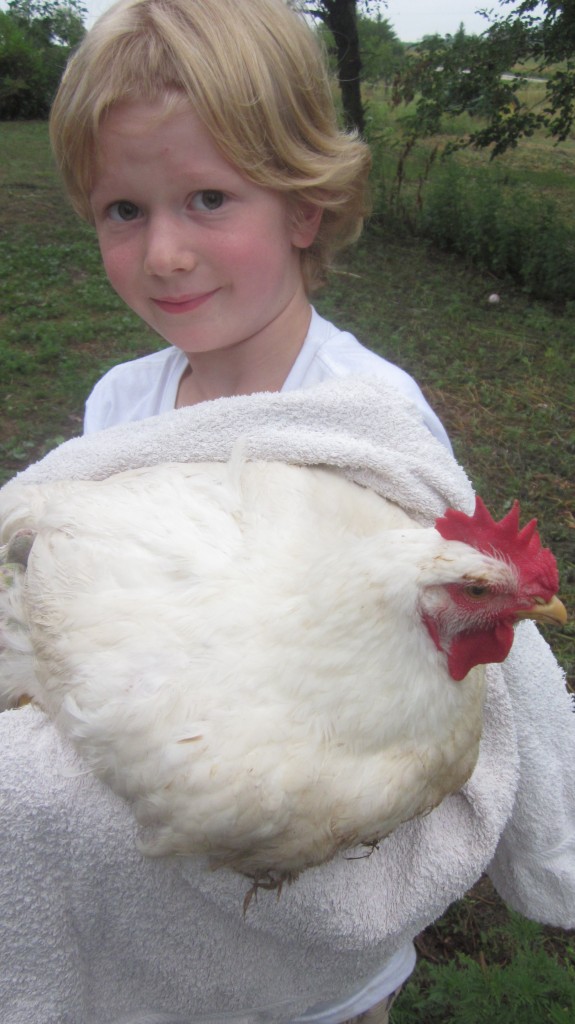 Little Mack is holding one of the Cornish Cross roosters which we raised this year.  The largest ones weighed in–dressed–right at 8 lbs. By the way, my son decided it was the End of the Line for his bangs, and he chopped them off. Not with my blessing, either.

The “Homesteading” movement in my family is very strong and always has been.  I don’t think it’ll ever go out of style with my people.  There is just something so elementally satisfying with putting up your own tomatoes in jars for use during the cold winter, compared to just buying them (an inferior product, at that) from the grocery store.  It’s worth the work, in my opinion, to raise your own chickens for the freezer (at least now and then!) instead of just buying them from the store.

I’ve heard my dad say time and time again that many of the current (and numerous) ills of today’s society are a result of people going to work for a paycheck, but having nothing in their hands to show for their day’s work.

I think he makes a valid point.

If you grow even a small garden and at the end of the season, have squirreled away packets in your freezer of the extra precious vegetables or herbs or fruits that you grew; if you do some picking at an orchard and can jars of apple pie filling; if you gathered up a neighbor’s unwanted pear harvest and made pear butter; if you shopped at the farmer’s market and bought enough winter squash to store in your pantry for later in the season; the homesteading trend is still alive and well, in my book, and I’m happy that it’s so.

I read some tales of current homesteaders that made me chuckle, and I think you’d enjoy them, too, Gentle Reader.  Take a moment and read about the guy who shot a wild boar and carefully squirreled away over a hundred pounds of it in his freezer, only to find out that it tasted like, in one friend’s opinion, “a combination of overcooked liver and pancakes.”  Or the lady who, tired of picking snails off her plants, decided that they were no different from the overpriced escargot that she ate at the French restaurant, so she braised them in butter and ate them.  Or the guy who wanted to grow figs more than anything, so he planted a fig tree . . . only to grub it out when it became too big and invasive and too productive for him and his wife to handle any longer.

I found these stories on a blog that I like to visit, called “Food and Wine” . . . and I’m sure that you will enjoy reading them, too.  They are short and entertaining and have nice little graphics accompanying them that I admire.  And that’s something, isn’t it? You can find them right here.

What do you think? Do you think the trend of homesteading has reached its peak?

23 thoughts on “The New American Homesteaders: has the trend hit a peak?”