Updated April 2016, for your enjoyment and ultimate good, and with my pleasure . . .

I wrote a post some time ago about the best way to prepare liver, if you are hoping to entice your family to enjoy it with you (not to mention enjoy it yourself!). When I eat liver, I feel the way Popeye must feel when he downs a can of spinach . . . or Ironman when he snaps himself into his powerful suit . . . or Superman when he pulls on his cape . . . you get the idea, Gentle Reader . . . I feel strong and powerful!

I have an edge, nutritionally-speaking, and that is a nice thing to feel, isn’t it?

What is it about liver, anyway . . . it’s so nutritious and yet it does seem to have an “ewww” factor for some people . . .  a bit like cooked spinach, eh? I wrote about how my son Timothy always razzes me when I make liver, and how he’ll pass it at the dinner table with a “anybody else want some of the cow’s poison removal organ?”  I have one word for Timothy: Hmmmmmph. And a second: What-ever.

I’ll let you chew on that question while you watch something a little lighthearted:

I would imagine that much of our feelings about food are dependent on what we grew up eating. My folks didn’t have a lot of money when I was growing up, and so junk food was not something my mom spent her grocery budget on, very rarely, anyway.  Plus there wasn’t as much back then, I’m pretty sure. This was pre-high-fructose corn syrup, after all, my childhood days, that is. Well. This was pre-lots of stuff, actually. A lot has changed in 30-some years (cough). Liver was a bargain then, nutritionally and economically.

Guess what: It still is!

Cheetos (much as I enjoy a big ol’ handful of them now and then), soda, and Moon Pies are basically devoid of nutrients and therefore not a good bargain, nutritionally and economically. I bought a pound of chicken livers at the grocery store the other day for just a little over a dollar. Now that’s a bargain in every way.

Here’s another fact. I fix beef liver and onions for my family fairly often, but we all like chicken livers even more than beef liver. There doesn’t seem to be the potential for that bitter taste that you sometimes find in beef liver.  And I’ve discovered a recipe for them that is easy and very, very quick.  The livers simply melt in your mouth.

I dug some new potatoes from my garden this morning, and I’m going to mash them up with some baby kale. My kiddos eat liver when I fix it, but I want them to really, really enjoy it, too, so I’m adding some deluxe mashed potatoes as an accompaniment. And I’m going to throw some uber-nutritious kale into the mashed potatoes, for a double-punch of nutrition for supper tonight. The chicken livers and the kale are going to have lots of garlic in them.  Triple punch! 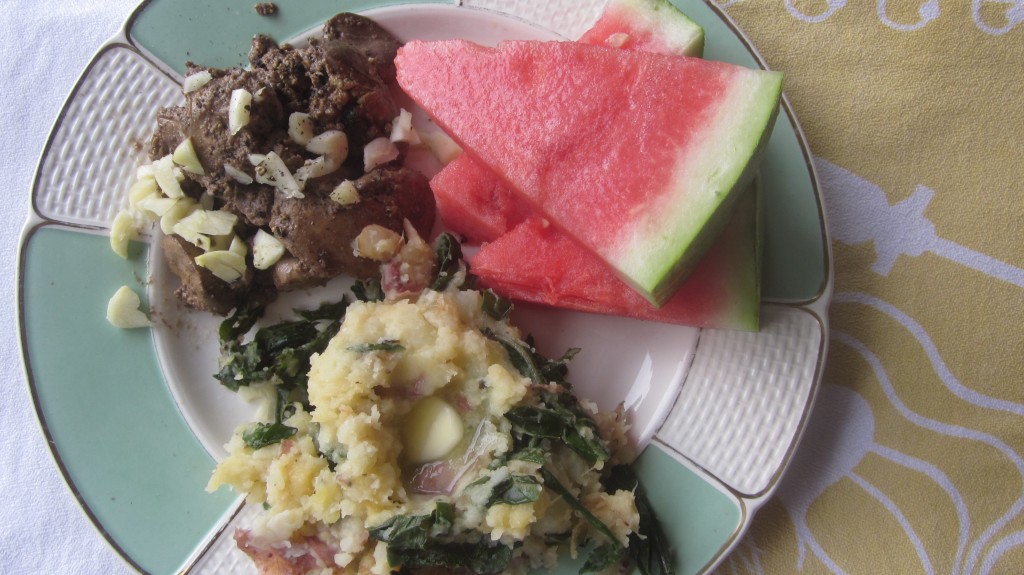 Fresh cold watermelon is such a great accompaniment to this meal!

Have I mentioned that all the kids still at home just got over the chicken pox? Now here’s a meal that will really saturate their cells with nutrients. I’m such a good mama to them. 🙂 Sometimes they don’t see it that way, but I have two words for them: oh well.

You’re going to love this meal too, Gentle Reader, and it won’t take much of a bite out of your grocery budget. Even if you have to buy the new potatoes and kale at the market or grocery store.

Here are the recipes.

First, the chicken livers: this dry frying technique prevents the liver from browning and keeps it tender enough so that it will melt in your mouth!

Wash 1 lb of chicken livers, trim and dry. DRY fry them (no oil!) in a frying pan (I prefer cast iron) for just 3 or 4 minutes or until they’re cooked through. Add 2 Tb olive oil, 2 tsps lemon juice, and 1 tsp of salt and stir gently. Remove to serving platter, and sprinkle with 5 cloves of garlic that have been smashed and diced fine.

My hubby Bryan and I traveled to the Netherlands when we were college students. I remember how much I enjoyed a dish that the local people served us: smashed potatoes and greens. I also enjoyed the fact that they called them “smashed potatoes” rather than “mashed potatoes.”

So here’s my version of that memorable dish: It’s great with liver, but with nearly anything else, too. 🙂

Smashed potatoes and kale
Author: Amy from vomitingchicken.com
Prep time: 15 mins
Cook time: 30 mins
Total time: 45 mins
Serves: 4 to 6
I like to serve something seriously creamy and yummy and toothsome, but packed with goodness, with chicken livers.
Ingredients
Instructions
3.2.1251

There ya go! I put lots and lots of time and effort into sharing these posts with you. I love doing it, too, but I don’t know if you value them unless you comment and/or share. Do me a quick favor, and if I’m on the right track here, please leave a comment or question, and/or share with your friends.

That would be an enormous blessing to me. And thank you, in advance. You mean the world to me, and I’m grateful for each one of you Gentle Readers.