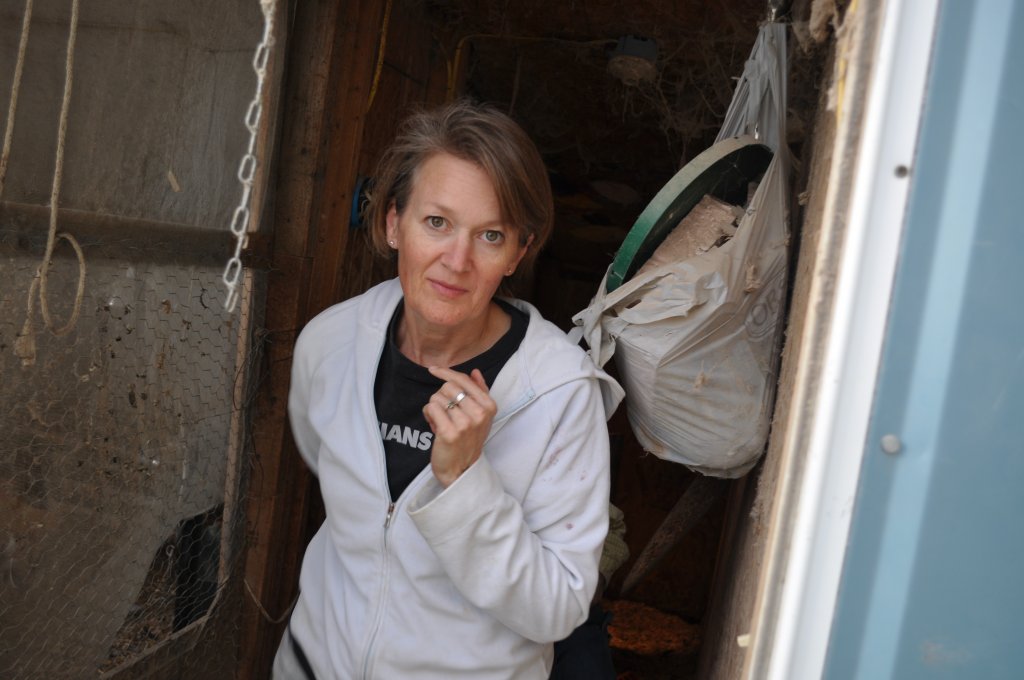 You know you’re spending too much time out with the chickens when the kids look for you first in the chicken coop . . .

(Want to start this riveting tale at the beginning?  You’re in luck!  Just go here.)

The sleepless nights and busy days trying to foil the Dreaded Varmint finally caught up with me, and I got sick.  Nasty sick.  I stayed home from church on Sunday, in bed with a nasty respiratory ailment.

Bryan spoke with a former chicken farmer at church who informed him that our borrowed traps weren’t big enough to catch a good-sized coon, a bobcat or a coyote, and that we needed a bigger trap.

My husband seemed to be taking it personally that we hadn’t been able to tempt the Dreaded Varmint with our two small live traps.   I had a feeling that this was exactly what my good husband was waiting to hear, and he must have been kicking his heels in glee that I wasn’t there to add a tempering voice of common sense.  So (during the aforementioned kicking-of-the-heels, probably) he leaped at the opportunity—knowing that I would have probably tried to talk him out of it (my inherent stinginess, remember)–to drive to the farm store to buy the biggest live trap. It was so big, we could have caught our 100-pound black lab in it, if we’d needed to (which we didn’t).  Let me tell you, though, Bryan was talking pretty fast as he was lugging the thing up onto the porch for my inspection.  (It took both Bryan and Timothy to carry it, Gentle Readers.)

I was astonished, and the words “overkill” and “extravagant” and “what about the mortgage payment?” (and others) came to mind.  But Bryan had been preparing all the way home, and to justify the expense to me, he calculated out loud–in a carefully rehearsed speech–just how much we’d lost so far, in dollar amount, from all the chickens killed.  This included not only how much it cost to raise each individual chicken, but also how much probable egg production (considering that we keep our layer hens for two years, at least, during which time they lay a lot of eggs) we had lost with each chicken’s demise.  (He didn’t even begin to try to calculate the emotional cost, naturally, or the fact that my current illness was probably partially caused by the sleeplessness and worry of the past few weeks.)  That was a depressing exercise, and it convinced me to keep my mouth shut about the cost of the monstrous trap.  I was a little scared of what we might catch in that trap, however.  I determined that it wouldn’t be a horrid idea to carry a weapon–a bat, a machete, a rifle–with me from now on when I check the traps.

(Just picture this, after all:  a mountain lion gets entrapped in the live trap–we have seen lion tracks out here, by the way–I walk out, sleepy, unwitting, into the glorious early morning to let the chickens out and check my traps.  The mountain lion has been lounging about in the trap all night, not feeling the urge to exert enough energy to escape.  He’s full of fat chickens, after all.  But then–motivation!  A plump, well-rounded soft female appears, white-skinned and not too bright, from the looks of things.  Bingo!  He’s out and I’m his breakfast!  See what I mean?  Scary!)

We admired and inspected the the freakishly humongous trap; we held it in awe and respect all afternoon; and then we lugged it out to an inconspicuous spot near the chicken yard, baited and camouflaged it.  We did everything but hold a blessing ceremony over it.  We were as ready as we were going to be.

Son Timothy, in a typically offhanded way, remarked that the large animal he saw a few evenings ago could have been a mountain lion.  Probably not.  But maybe . . .

Third day in a row of no chicken loss! Drifting off to sleep that night, I didn’t know if I could wait until morning.  Would we catch something at last?

One thought on “The Dreaded Varmint, Day Eight: a new live-trap”