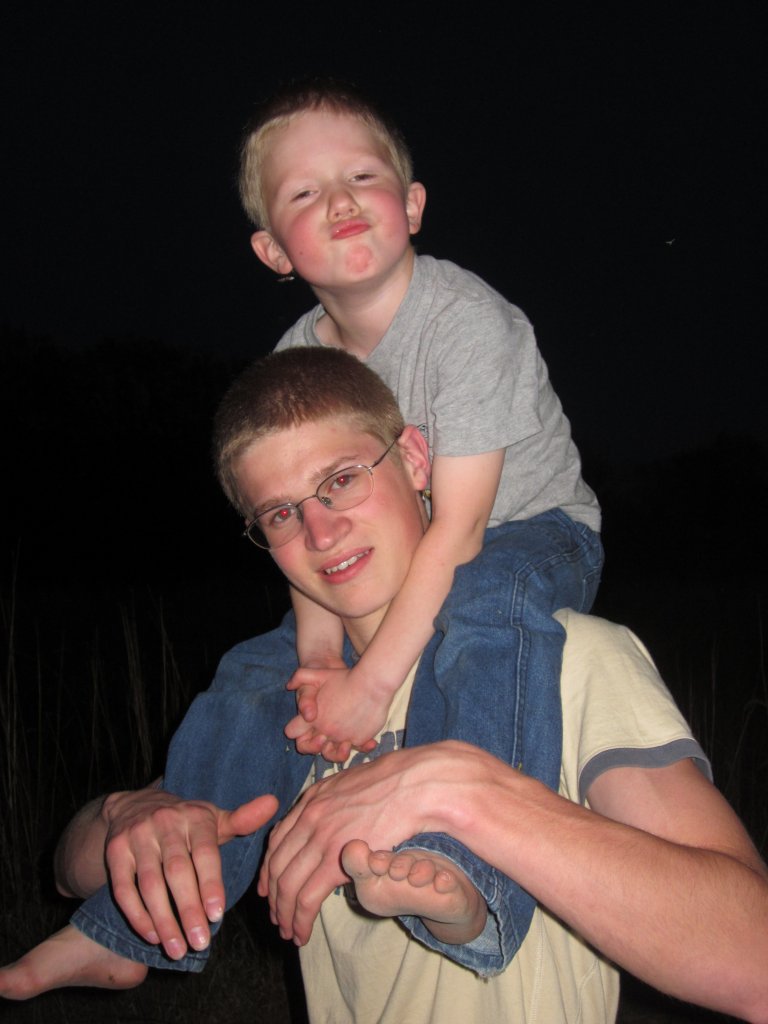 Here are my boys, little Mack and Timothy, clowning around after spending some time watching for the Dreaded Varmint.

Despite keeping our two live traps baited and ready for action every night, we haven’t caught a thing, and it’s unsettling, to say the least.  I’m getting chills just thinking about it.  Tell me, what devilish predator out there is:

a) smart enough and coordinated enough to steal bait from two traps without getting caught,

b) fast enough to elude two dogs that will do anything to impress their ma (me) and, not to mention, have been given carte blanche on wild things,

c) agile enough to climb up on a screen door and tear the screen away from the window, and

d) clever enough to remove a stone to gain entrance to the  coop?

Several things are going on that prove that the Varmint is uppermost on our minds:  First, Good Husband sat on the chicken coop roof for some time during the wee morning hours, with a borrowed shotgun on his lap.  No Varmint even dared appear.  That’s how intimidating my good husband can be.  Mild-mannered and gentle and soft-spoken on the outside he may appear, but to his core he is a staunch defender of me and my flock. (Soapbox:  that’s how menfolk should be, young ladies, take note.)  Secondly, our hay man, Mr. Hejne (for more about him, go here, it’s definitely worth a seque) appeared yesterday and gave me several new ideas for how to foil our varmint, including (here was the best one, I thought) rigging up a radio to play heavy metal music all night long in the vicinity of the coop.  “That stuff is so awful, it surely would keep even predators away . . .” he said, thoughtfully.  This, I thought, was an intriguing idea, but I had to discard it immediately, since we actually want to stay on speaking terms with our neighbors.  They already look at us a bit funny, with everything going on that has been going on, and all of us behaving in such peculiar ways.  To them, anyway.  Also he informed me that he saw a fox headed towards our place in the evening.  (Like this was shocking to me, which, you must know, it was not.)  Driving home from town in the early evening, four raccoons darted across the highway in front of us, clearly heading toward our place, also.  Despite my best efforts, I only hit one.  It seemed that the word was out:  tasty, tender chicken at Millerville.

Later that same evening, at dusk, we drove into our driveway and spotted a young deer, waiting innocently near the treeline (until it was be dark enough to munch a few apples from my orchard, I assumed, without being detected). It came to the kids and me all in a rush, as brilliant conclusions often do: that deer has got to be the DREADED VARMINT! No wonder the traps didn’t work! The Dreaded Varmint is: that DEER GONE ROGUE! By day, mild-mannered, doe-eyed, well . . . DOE, munching grass and leaves, looking all picturesque and sweet. By night: bloodthirsty, savage carnivore, stopping at nothing, ravenous for chicken flesh!! We were chatting this scenario up and little Mack replied calmly: “So let’s get Dad’s gun, and I’ll shoot it. Then we can cut it up and eat it.”

I admire my little farm boy so much.  He’ll make a fine provider some day.  Young ladies, take note!

Second day in a row with no chicken loss.  Had we foiled the Dreaded Varmint at last?