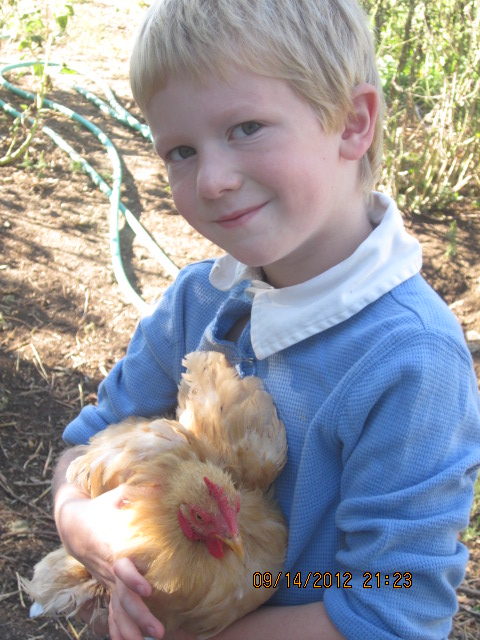 (This is Part Two of a many-parts tale.  If you want to start at the beginning for a re-cap, here is where you go.)

To continue . . . I had secured the tuna can in the live trap as my brother had suggested, with a strong piece of baling wire, so I was quite sure–as I went off to my cozy bed that night–that my predator problem was about to come to a satisfying conclusion.  For me, at least. Maybe not for the Dreaded Varmint.

I woke up very early the next day, and peered out our bedroom window, towards the live trap, completely expecting to see a wild animal entrapped within.  The trap was near the chicken coop, and–granted, my sleepy eyes weren’t focusing very well yet–I didn’t see any humiliated creature trapped there.  Drat!!

I pulled on some clothes and walked out to the coop, admiring the early morning sky in all its pink and golden glory, and bracing myself against the wind. The trap was empty, and the tuna can–which had been securely wired to the end of the cage, as you remember, cleverly, so any downward pressure on it would flip the trap closed–was removed from the trap, and thoroughly cleaned of its contents.  I felt a chill go up my back.  We were dealing with a pretty intelligent and agile foe, here.

A worse sight was waiting for me inside the coop, however.  I noticed that the small back door of the coop, which we prop closed with a heavy brick each day, was removed of its brick, and was moving in the wind.  Strange. Did we forget the brick last night?  I didn’t think so.

I entered the front door of the chicken coop, to see the chickens–usually busy and pecking and squawking in the early morning–still and quiet.  Weird.  Then I saw it–there on the floor lay the remains of one of my young pullets, and I bent down and picked it up.  I’d never seen anything like this–the chicken had been killed, and then eaten down to the bones, which looked like they had been polished!  The wings and a few bones were the only things left behind.  Creepy weird.

I felt anger well up in me.  That awful thing–he had not only crept into my chicken coop and killed one of my young pullets, but he had then sat there in front of the rest of the chickens and had eaten her right then and there.  It probably took him a good long time to clean the bones like that.

I’d never seen anything like that before, though we’ve had predator problems before this.

I feel awful.  Drat that creature.

One thought on “The Dreaded Varmint, Day Two: an empty live-trap”