(If you’d like to start this tale at the beginning, start here.)

It had been quiet around our place for several weeks now.  The only thing we’d caught in the huge live-trap was Bea, our own rascally dog. We were in the middle of a very mild, unusually dry fall, and we patiently waited for rain.  Maybe it was too warm for predators to go to the trouble to kill anything. Perhaps the Dreaded Varmint was so fat by then that he couldn’t scramble about in the heat any longer.  Maybe he had to go to a fat farm.  I didn’t know and I didn’t care.  I didn’t feel sorry for him in the slightest, either.  He had fattened himself on at least a dozen of my layer hens, and one fat (and sweet, and soft, and unwitting) goose.  If he died of obesity-related heart disease, I wouldn’t cry at his funeral, believe you me.  Heck, I probably wouldn’t even attend. Pshaw.

In an attempt to clean up our place and get ready for fall, Bryan had put away all of our live-traps.  We still carefully shut our fowl in at night, but the frantic weeks of baiting and checking traps every day had wound down.  It appeared that we had discouraged the Dreaded Varmint for good.

One morning, however, I was surprised and then alarmed to see that all the chickens were already outside, when I stepped outside to do my chores.  I hadn’t gone out yet to feed them and let them out of their coop, and I had shut them in the night before, I knew that much.  So how had they gotten out, I wondered, with a bit of foreboding.

When I got out to the coop, I saw the answer . . . the Dreaded Varmint was back.  He had pried open the front door (past two large stones) and had done the unthinkable . . . he had killed two of Babe’s chicks, Silk and Oakley.  He had eaten them down to the bones, leaving only their soft, downy spotted wings behind, and had left the front door open on his way out. Nasty, nasty, horrid thing.

Oh, Gentle Readers.  You remember the story of Babes and her three precious chicks.  The chicks had grown now nearly as big as their mama.  Now two of them were dead.  The third chick, Puff, had a wound on his chest, but I had seen chickens recover from worse wounds, and I examined him and thought his chances to recover were good.

It took me most of the day to swallow the lump in my throat so I could tell little Mack, who was especially attached to these chicks, about the awful occurrence.  Then he and I cried together.  When he had cried out his dismay, I reminded him that it was very important that we not feel sorry for ourselves, but that we use our grief to propel us to action–for the truth remained that, after weeks of lying low, the Dreaded Varmint was back. 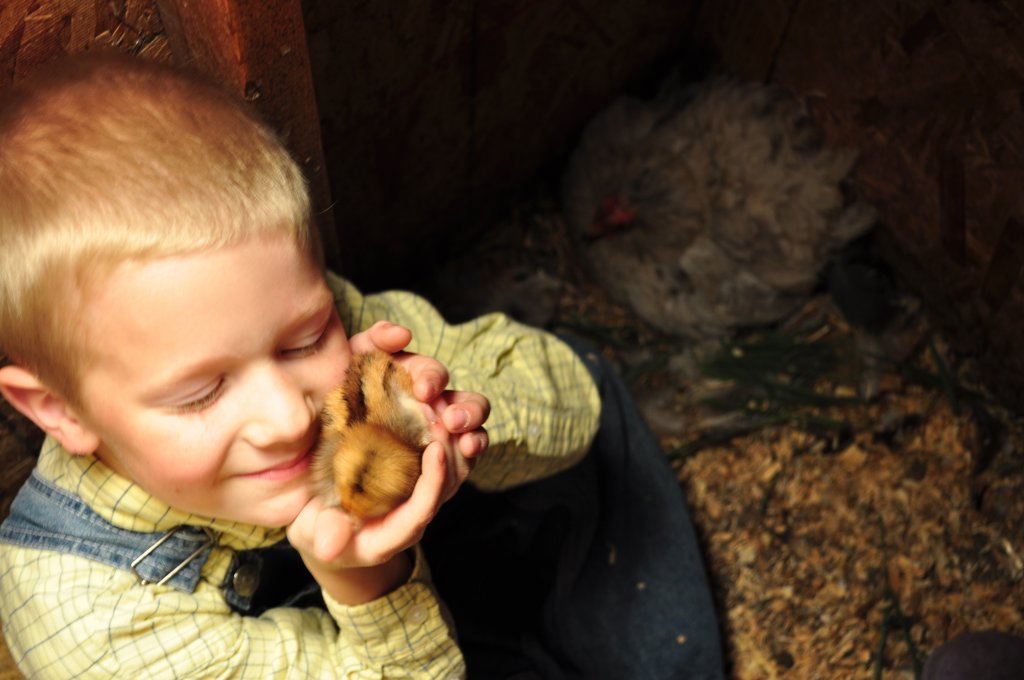 Here’s my little Mack cuddling a newly-hatched chick, a couple of months ago, with mama Babes in the background.  Did you ever see such a sweet face?

We now had another chance to catch him.  And this time, I ground out through my teeth, gazing at my little Mack’s tear-stained face, we would.

We didn’t waste any time or let any more chickens get killed before we put the live-trap out again.  Little Mack and I lugged it out that very afternoon and placed it in a different spot this time. The varmint had gained entrance from the front door of the chicken coop.  There had been two heavy stones in front of that door, but some straw had gotten caught between the door and the stones, leaving a big enough gap for the awful varmint to pry a claw or a foot or something in, and then pull the door open.  We decided to set up the live-trap right next to the front door.

Though we were quiet and serious in our task, as we lugged the live-trap across the yard,  we had a jolly entourage–Bea (our snappish, whip-smart Aussie, one eye still swollen shut from bee stings) and Ollie (our huge, good-natured–95% of the time–black lab who loves me the best).  Little Mack wore a gun belt with a cap gun–fully loaded, of course–and carried his binoculars. As we had approached the coop, Bea dashed into the front door of the coop right in front of me (she’s not allowed in the coop and knows it) and before I could see what was happening, was back out again, a streak with a lolling tongue.

She and Ollie both took off fast, and disappeared under the fence and through the neighbor’s adjoining corn field. SOMETHING had been in the chicken coop when we had approached it, and they chased it far enough away that I could no longer hear them rustling through the corn any more.

We had evidently nearly caught the varmint red-handed (you might say) in the coop as he contemplated which hen to eat for his supper.  At least this was my guess.  While we waited for the dogs to return, we checked the coop for other varmints (there weren’t any), caught four young pullets who were trying to roost in a nearby tree and tossed them into the coop (They do this every night–they sit in the same spot in the same tree, and I reach up and catch them, one by one.  They could actually choose another tree and I might not spot them but chickens aren’t known for their cleverness); refilled the water bucket inside the coop, moved two large rocks to prop the front door closed, moved two large blocks to keep the back door closed, and had one last look around. Then we carefully baited the live trap, and I sent little Mack into it to make doubly sure that the trigger would close the door, when it was tripped.  Yep.  It worked.  It was ready. We were ready.

What was it that the dogs were chasing with such reckless abandon? They didn’t return for a good twenty minutes. Had to be . . . the Dreaded Varmint.

Tomorrow was the day that we’d catch him, we just knew it.  As long as the dogs didn’t get him first.