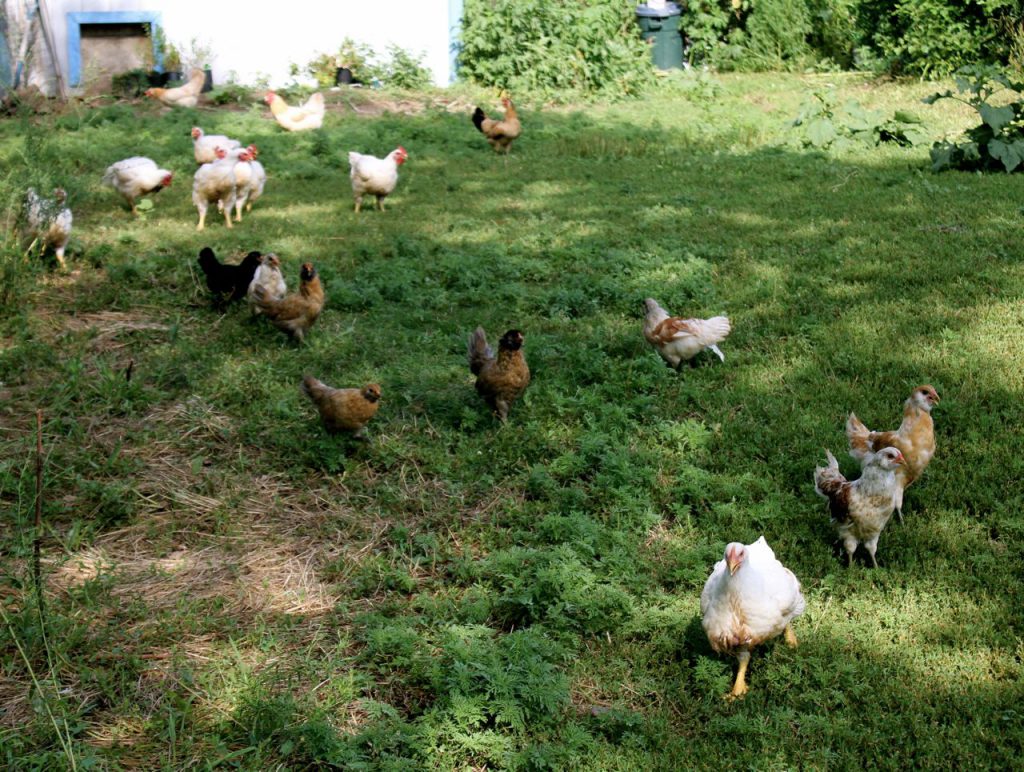 And heavens to Betsy, why doesn’t WordPress allow for cool little characters (like the é above) in blog titles? How can I use “ménage” without the é? (Might wanna consider an addition here, WordPress gurus, just sayin’ . . . )

I think we’ve exceeded the number of critters that Critter-to-Folks-Ratio-Analysts say folks ought to keep all at one time if they want to maintain a slim hold onto their sanity (not to mention ever catch up on the laundry), and yet . . . *giggling* . . . I am not crazy yet, gentle readers! Do please ignore the eye twitch, the disquieting habit I’ve developed of falling asleep whenever I sit down, and also the sudden maniacal laughter that occasionally and involuntarily bursts out of me, at inopportune times. Fie, anyhow, on those critter-analysis-ratio folks!

I think you delightful gentle readers haven’t met all of this year’s menagerie, and they are–in large part!–the direct reason that I’m writing far less blog posts this summer. There are only so many hours in a day, after all, as you know. So I do believe you ought to know what you are up against: a whole bunch of hungry critters, that’s what!

Butterscotch and the Icie twin chicks 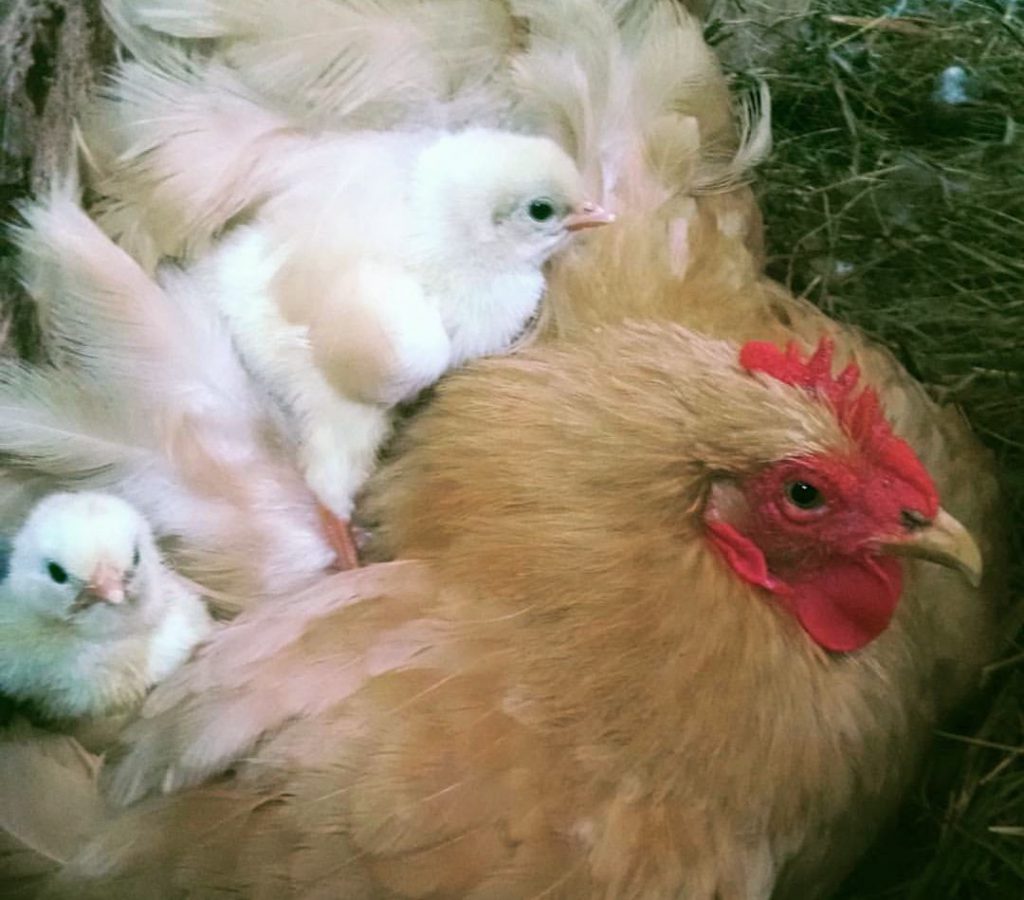 Butterscotch, our little bantam, goes broody every spring and stays that way for months. Nothing on our place pulls at my heartstrings more than a broody hen. I totally get the broodiness (I’ve got six kids, need I say more?) and I love babies of all types. Earlier this summer, I was trying to move a couple of our Icelandic hens (who were also broody) into the nursery, on top of a couple of nests full of Icelandic eggs. They resisted being moved–quite loudly and vociferously they resisted, chewing my blessed head off!–as most broodies will.

Once they get bit by the broodiness bug, they want to sit on eggs where they want to sit on eggs, doggonit! As I tussled with these two hens, trying to coax them to just move their fluffy bottoms onto these lovely eggs, Butterscotch–the smart little broody–moved in quietly and fluffed out her feathers and stayed put. So I left her.

I didn’t know what to expect, since Butterscotch has never hatched out any chicks before, though she has tried several times. But. She hatched out these two beautiful Icelandic chicks. These are the first Icelandics I’ve had that are pure white. And they are the first Icelandic chicks hatched out on our place. Their mama is not the sharpest pencil in the pencil bag (no offense to B.Scotch, some has got more brains than others, ya know) and the nature of the chicks is so different from their pleasant mama. They slip out of the coop early, before I am even outside to let the other chickens out, and they are comfortable exploring and hanging out with the meat chicks, and going their own way, though they are so tiny! Once I let the other chickens out (including their worried mama) they happily reunite with their mama, and hang out with her the rest of the day (more or less!).

They are independent little dickenses (as my Grandpa Young would say) at just a few weeks old, so I do wonder what they’ll be like when they are teenager chickens (wince). 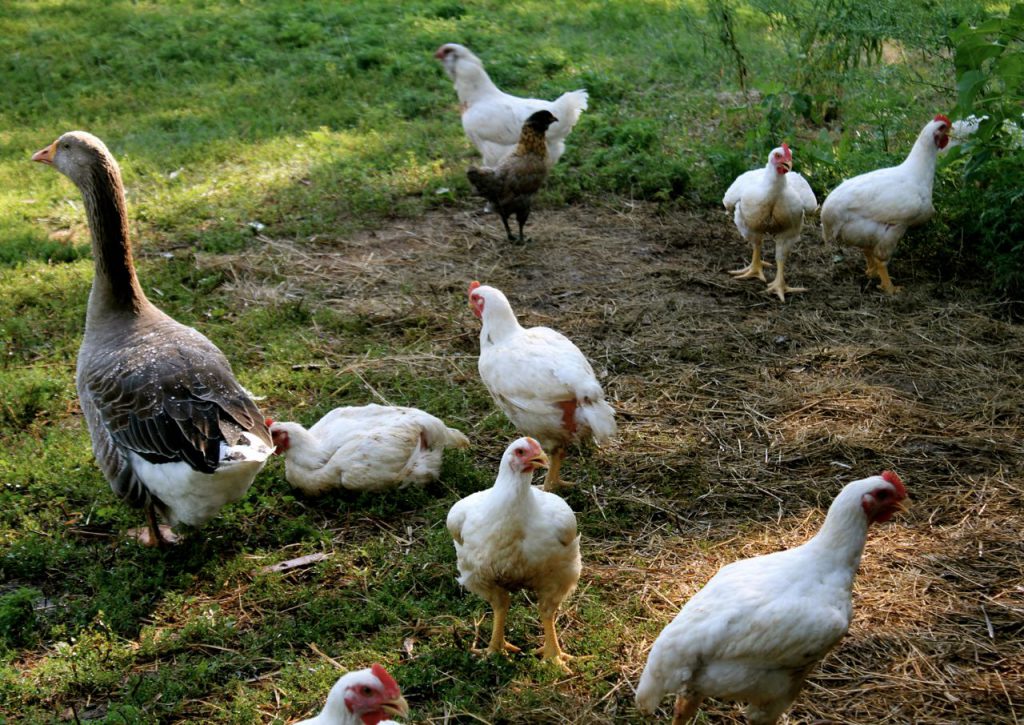 They wouldn’t win any beauty contests, it’s true. But I like to raise them. Lucy watches over them when she can.

I’m so happy that I learned how well meat chickens get along at free-ranging and foraging last year. No more close, uncomfortable confinement for my meat chickens. I still keep them in the chicken tractor at night for safety, but first thing in the morning I let open their door and they shoot out, eating bugs and clipping off weeds and seeking shade for their morning naps.

There are people who will tell you that meat chickens don’t free range or forage. Those people are wrong.

Bit of unsolicited advice: if you ever raise meat chickens, you will enjoy raising them far more if you allow them plenty of space to roam and free-range. They are heavy and they look silly when they run (probably kinda like middle-aged women who haven’t run in a couple of years *cough*) and they have odd, twisted toes and huge feet . . .  but they are interesting creatures who deserve to be treated well.

And. I learned something valuable this year. Because I offered to raise a couple of pullets for some friends of mine, and because I have a soft spot in my heart for Ameraucana chickens, their docile, friendly natures and their beautiful bluish green eggs, I bought 7 Ameraucana chicks at the same time that I bought the meat chicks. I’ve been raising them together in our chicken tractor, which works just great. And here’s the really super thing I’ve learned: those Ameraucana chicks are quite a bit more adventurous than the meat chicks, of course. But when they charge off through the weeds after grasshoppers . . . the meat chicks follow. I watched in astonishment this morning, as two of the pullets and three meat chicks charged off through the long grass after grasshoppers.

If you have ever raised these heavy-bodied, big-footed chickens, you’d know why this is so surprising. They don’t move much, and they don’t move quickly. But they move quicker and more often when there are other chicks to inspire them. Fun discovery, huh? From here on out–when I buy meat chickens to raise, I’ll always try to also buy a few of other breeds to raise with them. It’s a good pairing. 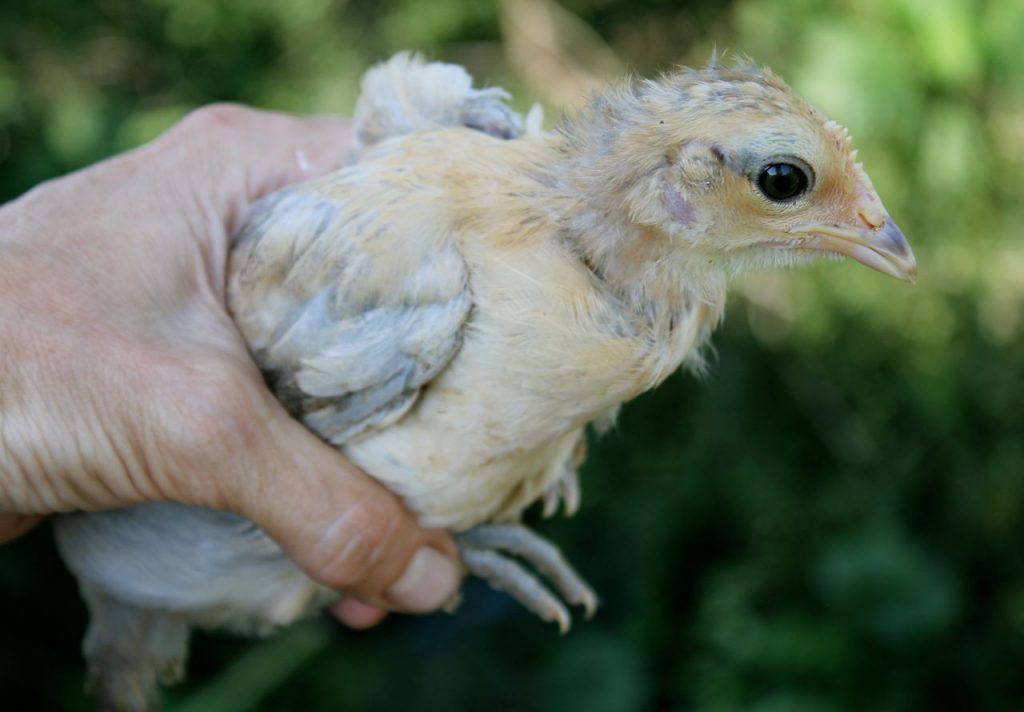 In my goal to eventually breed Icelandic chickens, I bought another batch of chicks this summer, to increase the genetic diversity of my Icelandic flock. They are beautiful, fiesty, independent, and chafing in their little nursery area. Once they are just a bit bigger, I’ll crack the door open and give them more freedom. Several of them (roos, most likely) are already slipping out through the coop, and causing Mack and me to catch our breath regularly: What was that in the long grass? Was that an Icelandic chick? Oh no! There’s an Icelandic chick out, Mom!

For the foreseeable future, I’ll be out at bedtime, thrashing around in my summer pajamas, trying to catch these tiny, quicksilver beauties who move faster than I, and that I can catch with just one hand. Just a few of them, every night, but they are precious to me, so I don’t want them to be cat- or coon-snacks during the night. 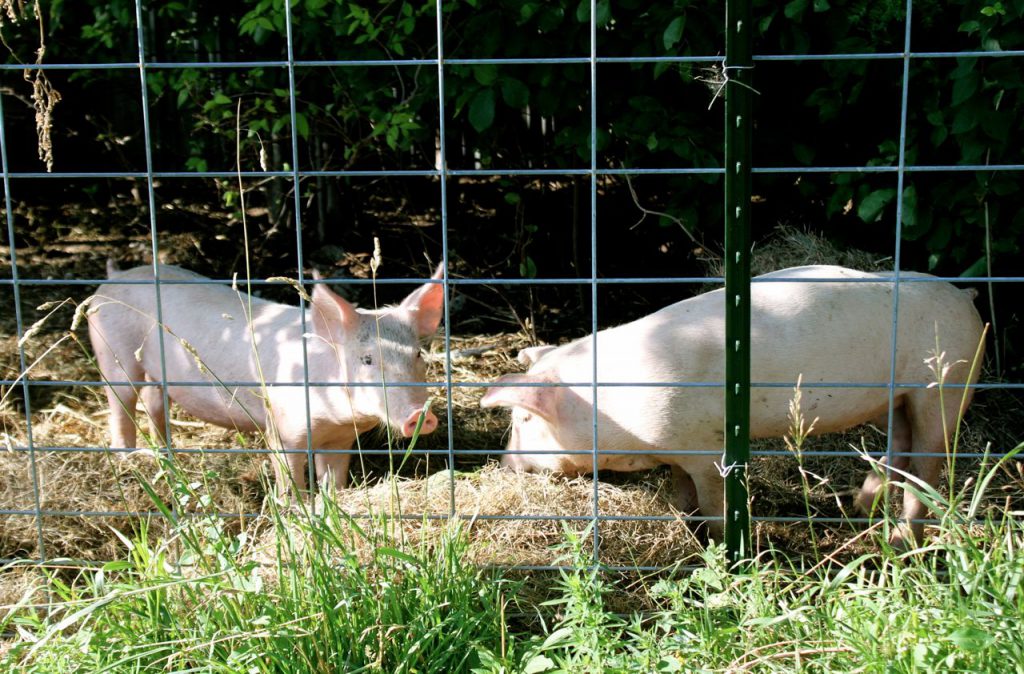 I love learning about raising pigs. I can have totally new conversations with people now, about the feeding and care of pigs, the meat-to-fat-ratio in pork, the relative benefits or feeding corn vs wheat to pigs, and so on. My hopes to be a Real Farmer some day are being realized!

Plus this: every evening (as I’m going out to keep my Icie-catching routine) I carry snacks out for the piggies. “Piggies!” I yell, and these two (who are watching for me) get excited. Really excited. Beacon squeals and begins to tear around like crazy, and Chinwig follows suit, though her personality is more sedate, so she only grunts. They loooove evening snacktime. 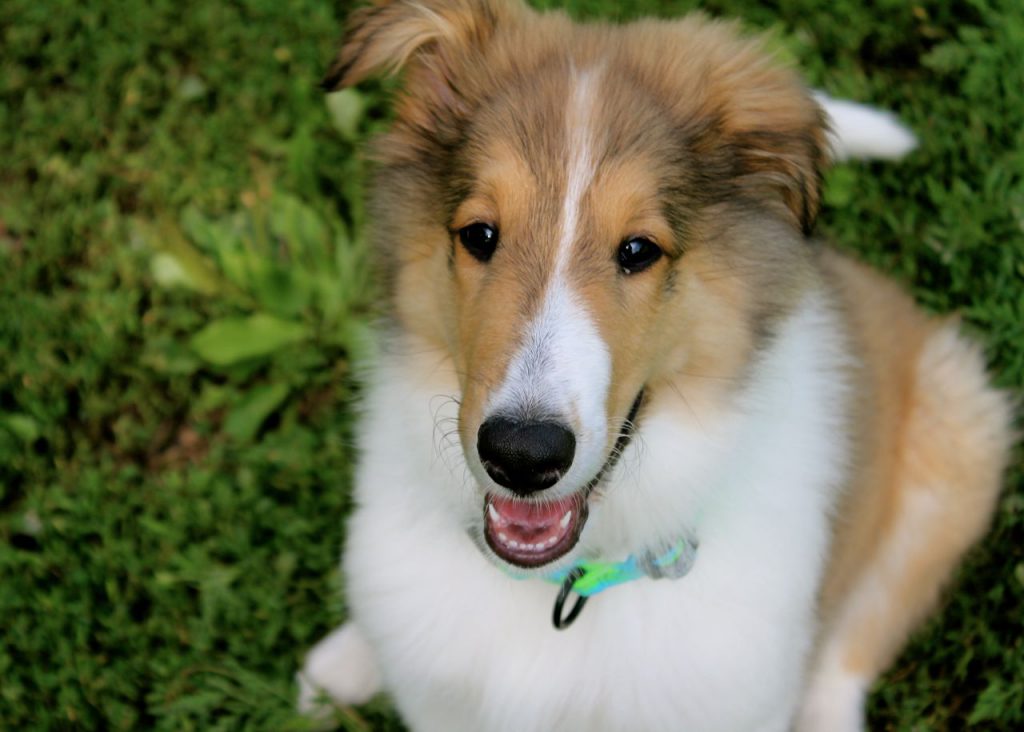 Oh, this puppy. What a dolly. What a balm. What a precious pain she is.

We lost two old dogs this spring, and gained one new puppy. I watched Mack lurk around with a broken heart (over the loss of his old pal, Ollie) for a couple of months. It was painful on all accounts to watch this little boy grieve for his friend. We started looking for a puppy soon after Ollie disappeared. I’ve found that nothing heals the pain of a lost pet, like a new one. Scout is just what the proverbial doctor ordered, for little Mack in particular.

She’s fluffy, and busy, and funny, and ornery. She is a pain and needs training not to bark at everybody who comes in the door. Not to pull on Mama’s pants. Not to forage through the trash with her beautiful long nose. She is delightful and doesn’t sleep very well at night. 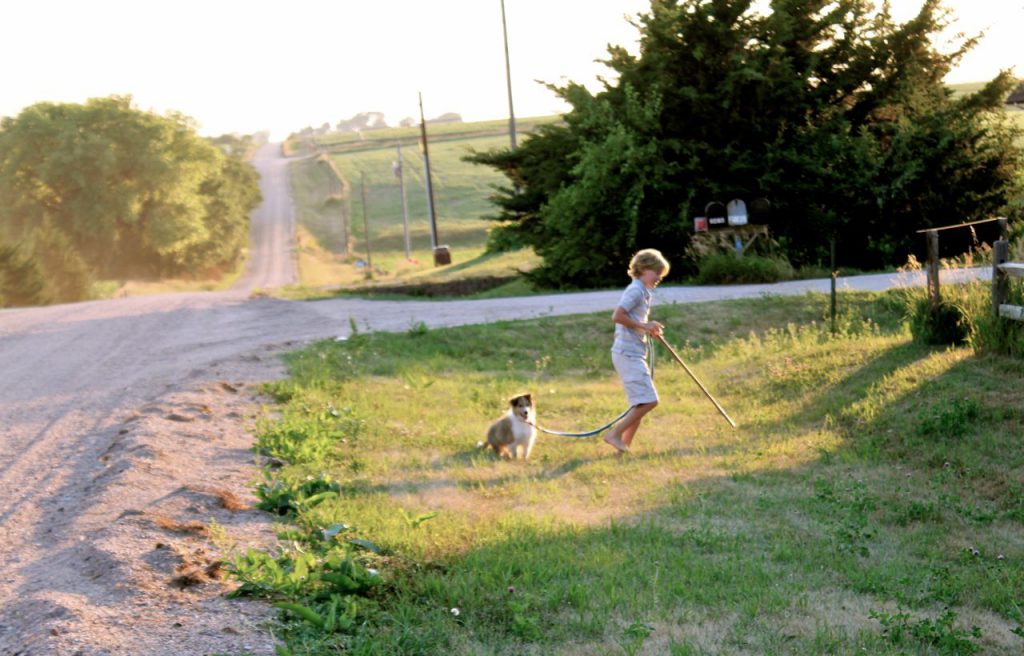 The cats aren’t so sure about what to think about her. 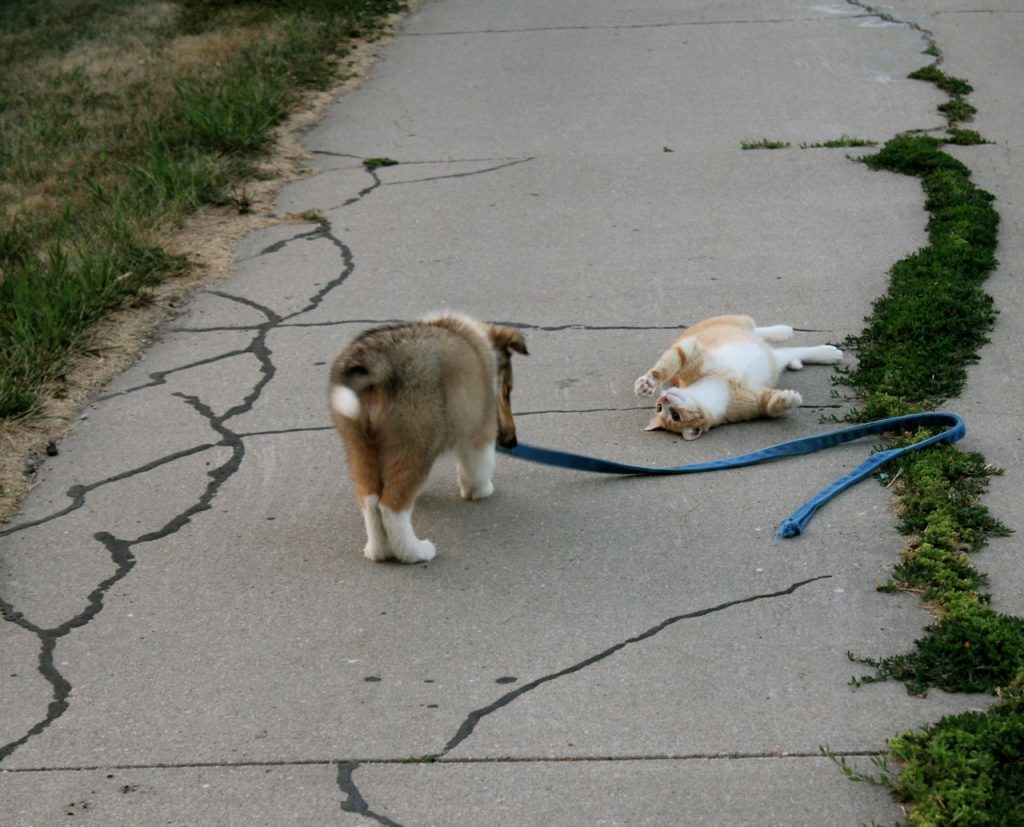 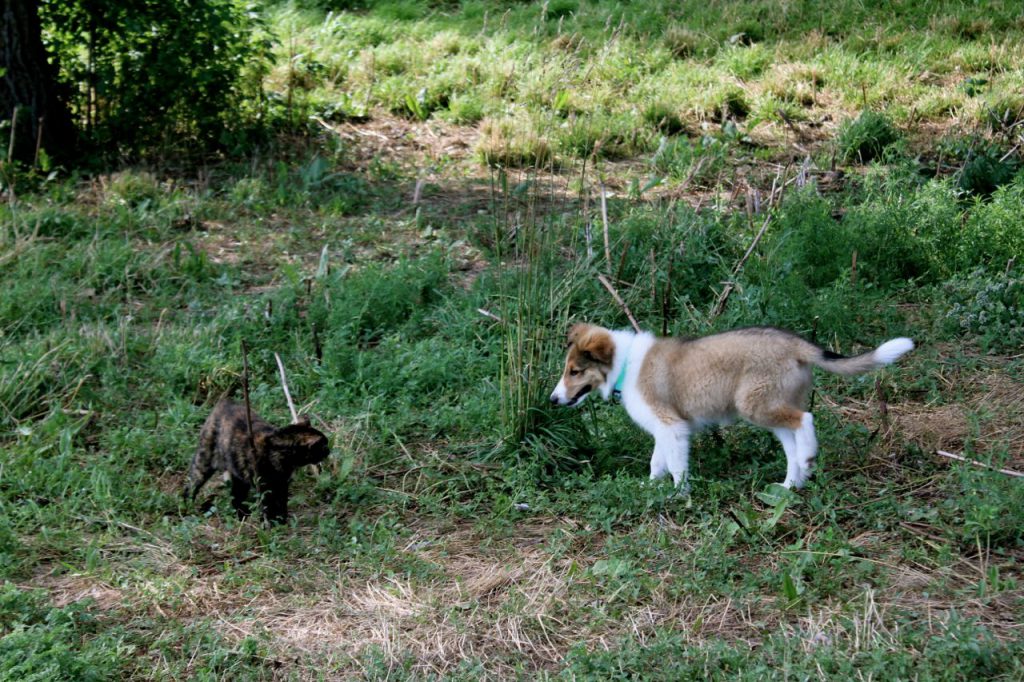 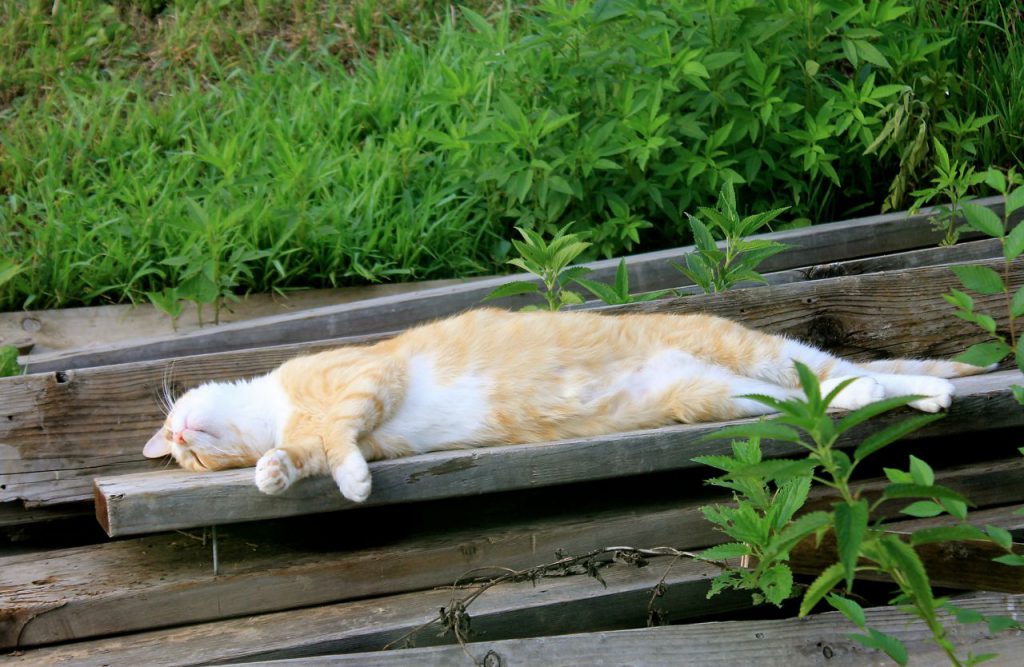 Some days are made for this. And this alone.

If you come visit me at our place, you’ll probably see GoldenBelly and Pippin, you may even see Tristan, but you probably won’t see the other three. They all have distinct personalities and quirks. Poor Merry recently suffered from an unexplained (she won’t explain) eye injury, and is also a hopeless addict to an egg for breakfast every single day. So she sits on the back stoop, waiting for me to stumble out to make coffee, first thing (usually before the sun is up). I have Scout with me, who is biting at my pajama pants, wanting attention and playtime. Merry is sitting at the glass door, looking in with that pathetic damaged eye. Poor thing. I will give her anything, and all she wants is a fresh egg. So that is what she gets.

Pippin is the old warrior, and is looking his age, which is probably around 15 (like Merry). He has a crumpled ear and is very thin. Sammie is a tortoiseshell who disappeared for a month after we brought Scout home; I don’t know where she went. She came back home this week, and I’m so happy that she did. Smokey is reclusive, fat, sedate old uncle who will poop on the roof rather than mix on the ground with the other cats. He lives under the porch–24/7, 365 days a year. I reckon it gets awfully boring under there, but certainly he keeps the mice at bay. He comes out for breakfast every day. 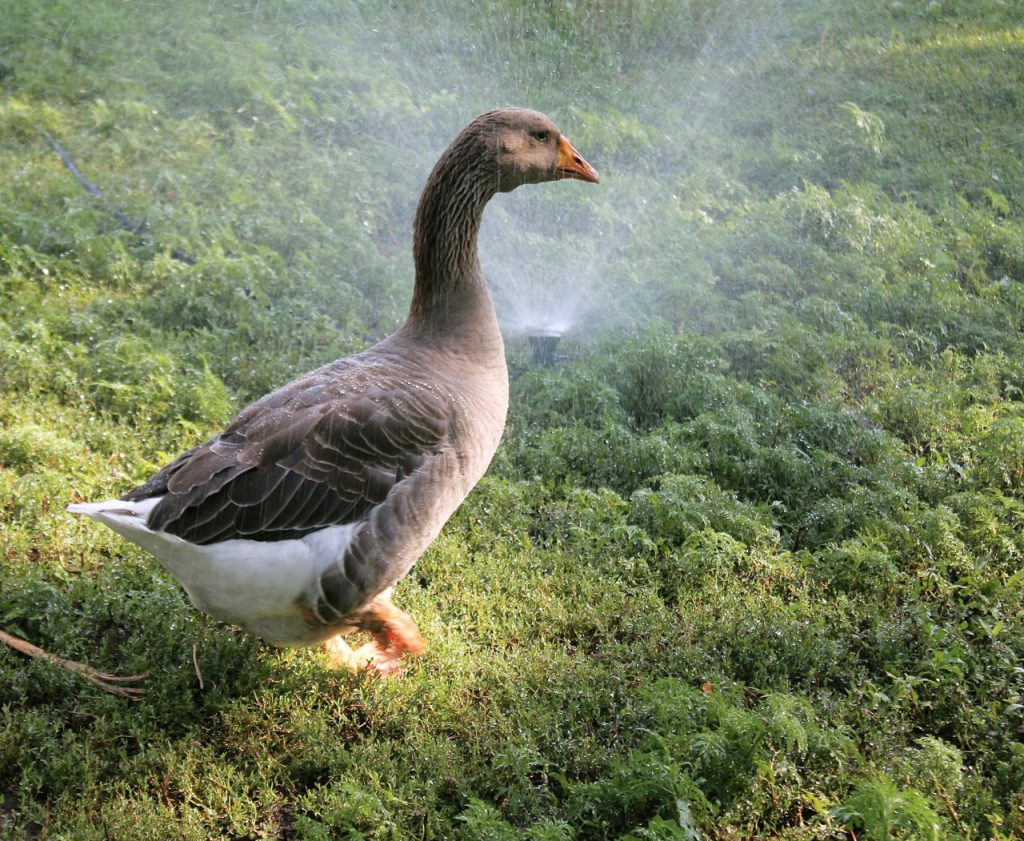 It is fun to keep waterfowl, even if you have too many predators to encourage them to hie on down to the pond, where they’d love it. We keep three–the auntie goose Lucy, and the ducks Calpurnia and Rufert. They are amusing and really appreciate fresh water. We’ve had painfully hot and humid days lately, and I’ve been running a sprinkler for them.

They show their appreciation by looking at me with gentle expressions and enjoying the spray. What more can one ask for?

That’s it—my quick exposé of all our critters we’re keeping this summer. It’s a lot. I always think: as long as there are no problems, these critters take only minutes a day to care for, and they give us so much pleasure and amusement. Of course when there are problems, then the time requirements go up, but isn’t that life, in a nutshell?