I’ve neglected my sketchbook over the past few weeks, and it is calling my name. I miss the physical action of drawing if I don’t do enough of it. My fingers on my right hand begin to itch. My eyes start to search for things that must be drawn. I feel a real longing to watch my pencil drag across a white page and put something there that wasn’t.

Did you know that drawing is good for your brain? And never mind if you feel like you’ve got the ability to draw well, or not. Making art is also something that can elevate your mood and actually make you happy! That is probably a good portion of why I miss it if I don’t draw regularly.

Forget the caffeine. Pick up a pencil and draw.

“We may not be aware of the complexity of drawing, but when analyzed in detail it becomes clear that drawing is an amazing process that requires precise orchestration of multiple brain mechanisms; perceptual processing, memory, precise motor planning and motor control, spatial transformations, emotions, and other diverse higher cognitive functions, are all involved. In terms of the multiple-intelligence theory (Gardner, 1983), drawing heavily employs such categories as bodily-kinesthetic and visuo-spatial intelligence.”

When I read this, I felt less self-indulgent in my insistence since Day One of our homeschooling experience that each of my kiddos learned how to draw. We draw together every day, even if just for a few minutes. Probably someday they’ll find out that people who draw learn other things–like math and foreign languages–faster, too which is good news for us all, certainly.

As the days get shorter and grayer in our part of the world, I cling to things that make me happy. And making me smarter? Gosh, that’s okay too. 😉

My garden (a real purveyor of happiness during the growing season) is asleep and won’t be producing now for many months. But these things make me happy, instead: spending time with my family. Hot soups. Bread in the oven. Dark chocolate. 😉 Starting a new knitting project. Dreaming about my spring garden. Watching my chickens. Playing games with the kids. And drawing.

Strong coffee and chocolate for breakfast, anybody? 🙂

Did you know this? Drawing is quite an amazing process: whether you are drawing from something you are looking at (observational), or inventing your own (conceptual), it depends on many different brain regions:

Never heard of conceptual vs observational drawing? It’s simple: “conceptual” is what you make up. “Observational” is when you draw from life.

Here’s a conceptual drawing (obviously) that little Mack was working on yesterday: 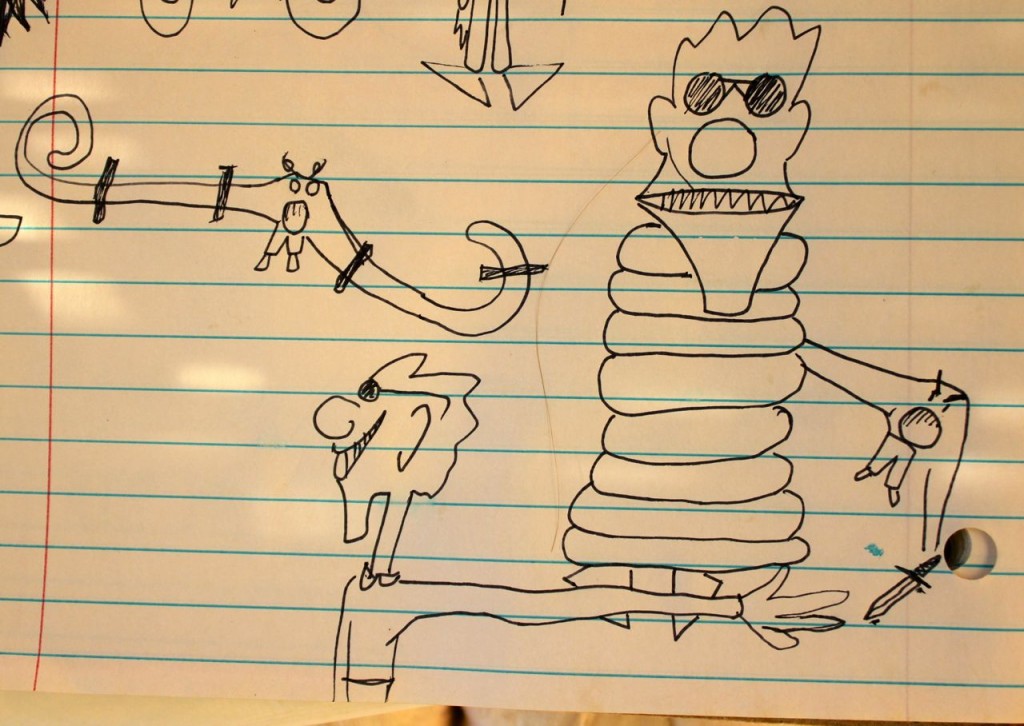 And here’s an observational drawing that I have been working on. Mack’s piano teacher, Elizabeth, has a lovely African violet sitting under a lamp in her living room. When I sit listening to his lesson, I work on this drawing. Maybe I’ll finish it someday. 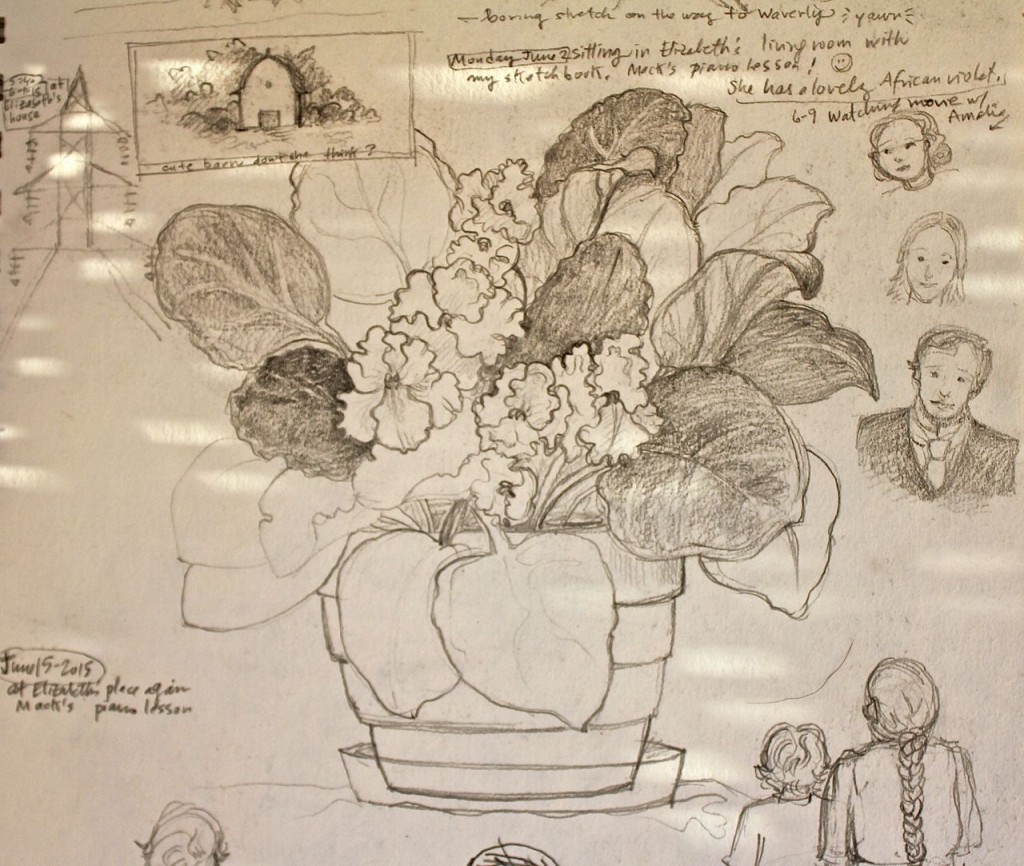 I drag my sketchbook with me every time I know that I’ll be sitting for a spell, like in the car. 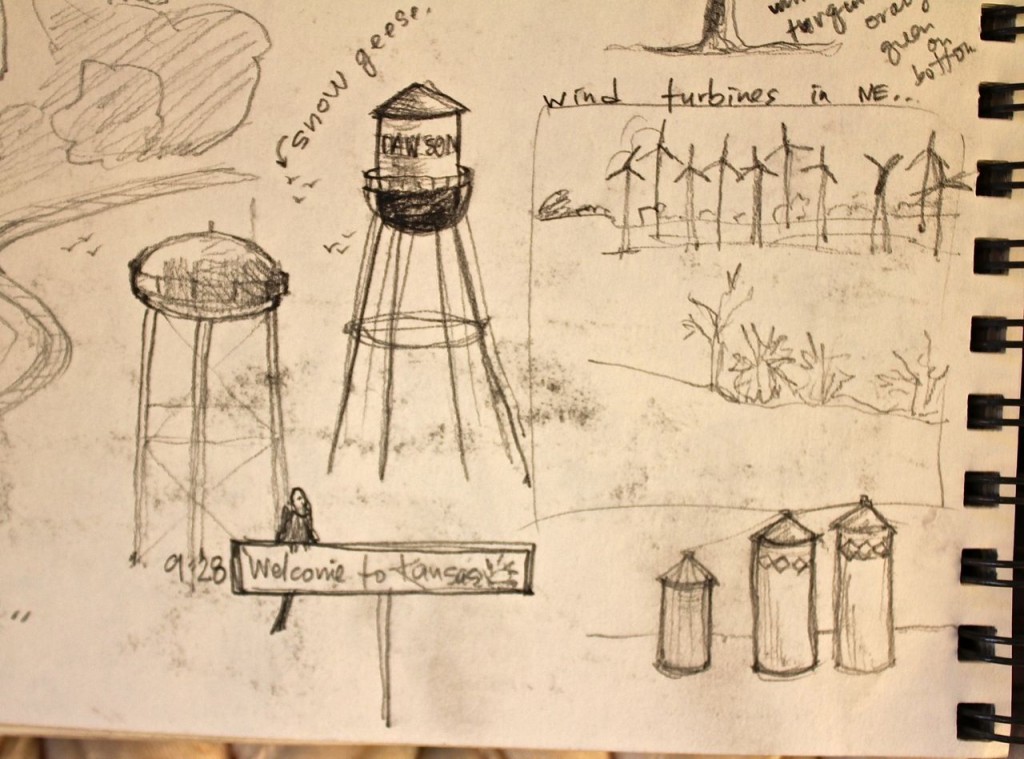 Water towers and silos in Kansas!

Here’s the answer: when you draw, dopamine is released. Dopamine, of course, is the feel-good chemical that is released in your brain. Dopamine is involved in the brain’s reward system, which also is the system associated with increasing creativity and pleasure. It’s all pretty fascinating and complex, but you can read more about it here.

“Dopamine is produced in the brainstem . . . but the dopamine is released in the cortex, the part (of the brain) that we use to create ideas, make decisions, and plan our actions. Thus, we feel rewarded when we create new objects or actions. And since creativity is based on the decisions made by the creator, the reward system kicks in when we are in control and inventing things that we have thought of ourselves. Freedom and ownership are part and parcel of the neurochemistry of the arts,” –James Zull, Professor of Biology, Biochemistry, and Cognitive Science, Case Western Reserve University

Want to draw but feeling a bit lost about the process? My original Sketchbook Thursday post contained links to my very favorite how-to-draw books, the ones that my kiddos use every day during school, and the sketchbook that I use and love. If you want more inspiration, check out these excellent books. I recommend them for deeper understanding about the drawing process, as well as thorough instructions on drawing.

This is a great book!

and then there’s the classic, Drawing on the Right Side of the Brain, by Betty Edwards.

I love this book.

I just discovered this, too! A Drawing on the Right Side of the Brain workbook!

Ooh, just for fun, I may have to add this to my library!

Thanks for joining me again, Gentle Reader. Now—go draw!

A vintage bottle with a spout! from my New Shop-which-is-coming-soon!

Tagged on: Art, brain development and the arts, drawing can make you smarter, drawing in homeschool, how art affects your brain, how to teach children how to draw, recommended books on drawing, Sketchbook Thursday, Sketchbook THursday

9 thoughts on “Sketchbook Thursday: good for your brain and happifying, besides”