I never thought it would come to this. Thus is the price of chicken-keeping success, I guess.

You know, Gentle Reader, that I raise a lively and eclectic collection of fowl . . . there’s our lovely goose Lucy, along with many beautiful hens in lots of colors, shapes and sizes . . . Bantams and crested Polish and Buff Orpingtons and Silver-laced Wyandottes and Barred Rocks . . . pretty chickens are like salty chips . . . it’s hard to stop, once you’ve started on them. So we perennially house more chickens than we have space for.

They do get a bit crowded.

You know, don’t you, about the challenges of roosters in a backyard flock. Say your broody hen shows up with a passle of little ones. There’s joy all around, of course. However, chances are, more than half of the adorable little handfuls of fluff will grow up to be cocky (no pun intended), competitive, arrogant, I-can-crow-louder-than-you-roosters. Trust me, you won’t want or need all these roosters when they are grown up. They get a little, er, rough with the hens, too, which I loathe. We regularly butcher young roosters, and they make wonderful bone broth and dumplings and so forth.

But occasionally it happens that a rooster comes along who is so special, you just can’t approach him with the butchering hatchet. It would be wrong. Heartless. And most certainly, stupid. Now and then a rooster is too unique to get rid of, especially when one has a special, er, quirk.

That’s the way of it with our rooster Claudius. (You know a rooster is special at our place when he earns a name.) Yep. Claudius is special, but we have too many special roosters. Honest. There’s Steve Brody, and Colonel Klink, and Colorful, and Saucy, Tom, and Sir Galahad. Too. Many. So I’ve decided to part ways with a few of them–to give the hens a break, and to quiet down the chicken yard–including (sadly) the elegant and talented and unique Claudius. 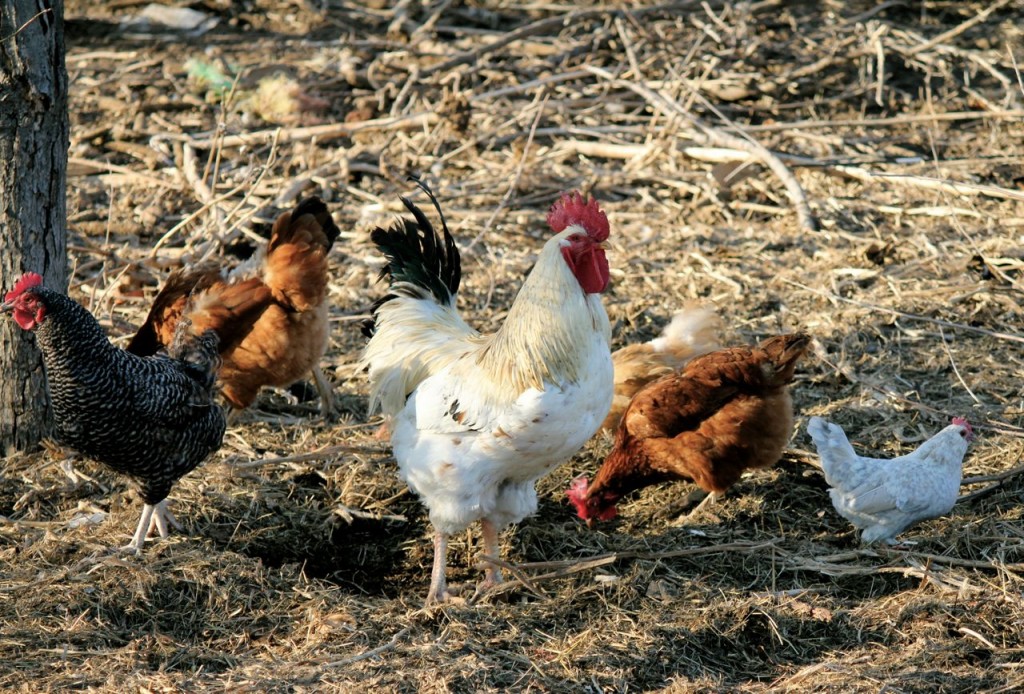 Here’s the elegant Claudius–isn’t he grand? He has such a proud stance.

And so, I am giving away this rooster to one lucky Gentle Reader. I have too many roosters + I need to get rid of some + Claudius is too special to butcher = I’ll have a giveaway! The logical conclusion for any chicken blogger, right? Of course, right.

A rooster giveaway. The way I figure it, live chicks are sent in the mail all the time. They get along just fine. Also, boxes of bees are sent to beekeepers through the mail every spring, to good effect. Thousands and thousands of them. So is one live rooster that much different from a small chick (genetically, of course, no) or even a buzzing bee? Ponder it.

I’ll run this giveaway for this week only . . . then I’ll stuff the gorgeous Claudius into a good, sturdy box, toss in a handful of sprouted grains (he is a bit spoiled in the feed department, just so you know if you decide to enter) affix the proper postage, and send him to one lucky winner, via Overnight Mail.

Amalia follows a blogger who regularly puts up her cute, used clothes for sale. Amalia drools over them all the time. This is (cough) kind of the same. Different genre, to be sure. But Claudius is pretty much exactly the same as that fluffy tulle skirt that Amalia has been wanting. (He’s even the same color, Amalia!)

Claudius is a good, slightly used, rooster. You’ll never have a more handsome fellow strutting around your barnyard. 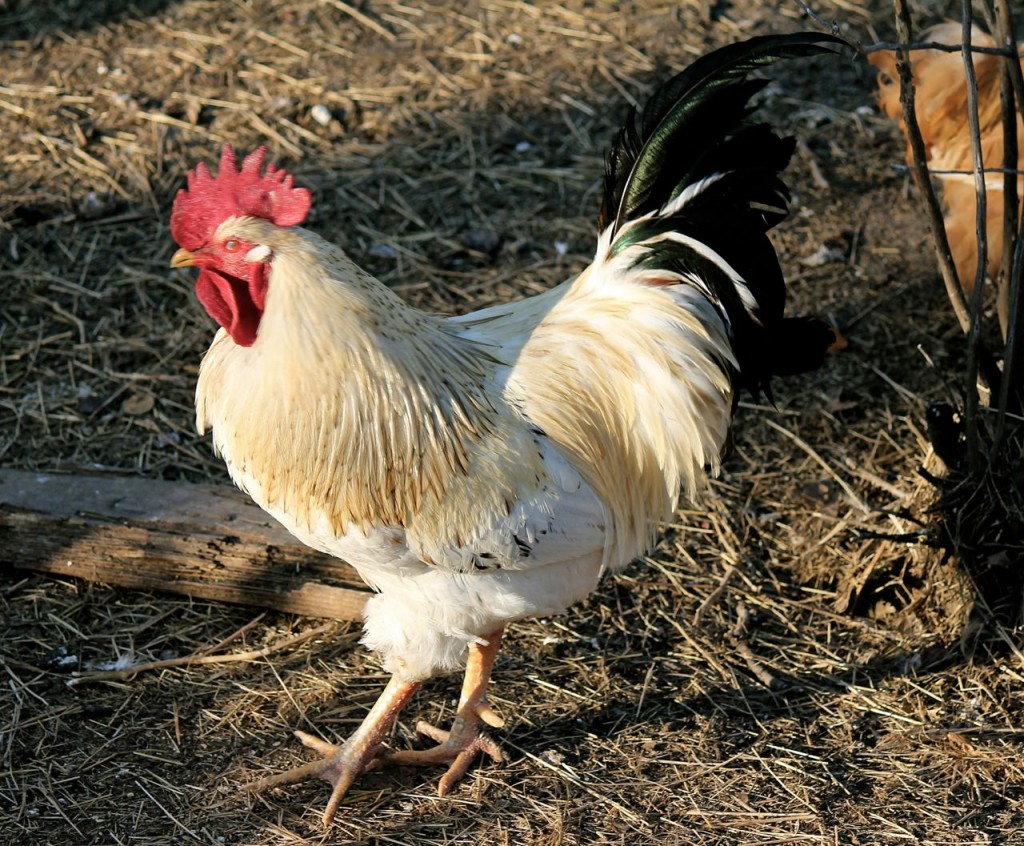 He looks so handsome in the Golden Hour of early evening, doesn’t he? Glossy–healthy–good posture.

But wait. I haven’t told you about what makes this particular rooster so special.

One of the delicious charms of owning a rooster, as you know, Gentle Readers, is the crowing. When I used to live in town, I dreamed of the day when I could wake to the sound of a rooster crowing in the early morning. You know: the farmer’s alarm clock, and all that. Now, Claudius does crow, but that’s not all he does. 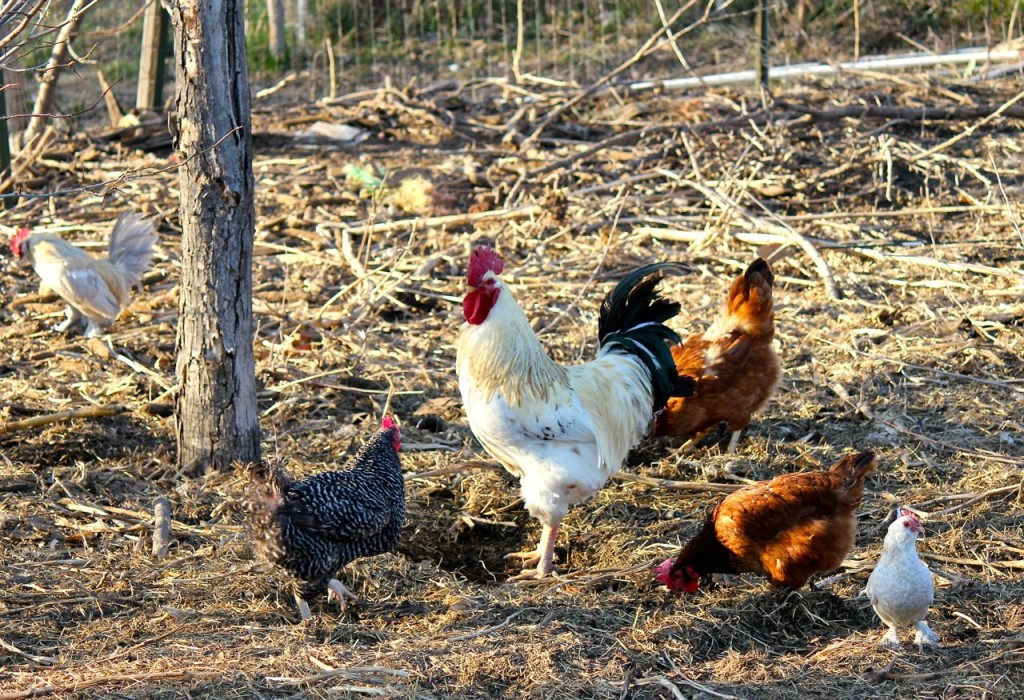 Here Claudius stands gaurd over his little circle of hens. His report card, were he to go to school, would have the note “gets along well with others.”

Claudius whistles. You read that correctly. He whistles, and in a very pretty way, too. I know it’s hard to believe. But I wouldn’t lie to you.

You must own that such a beautiful rooster, who whistles, is a treasure unparalleled to any chicken farmer. 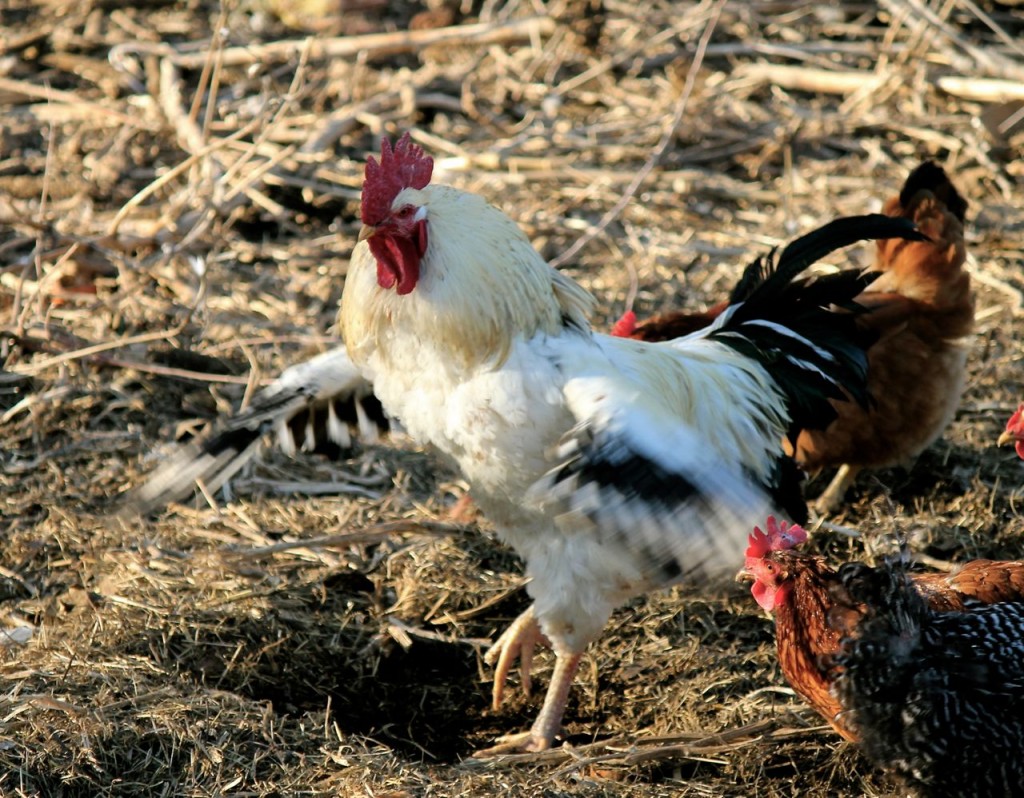 Claudius is a bit of a show-off, as this shot suggests. “See how mighty my wings are.”

He’s probably worth quite a bit, the thing is. I probably shouldn’t do this.

He whistles quite a varied repertoire, but lately he has favored “The Battle Hymn of the Republic.” I don’t blame him. It’s a catchy tune. The kids had to learn it for our last melodrama, and probably he picked it up from one of them. And, it’s easy to whistle. 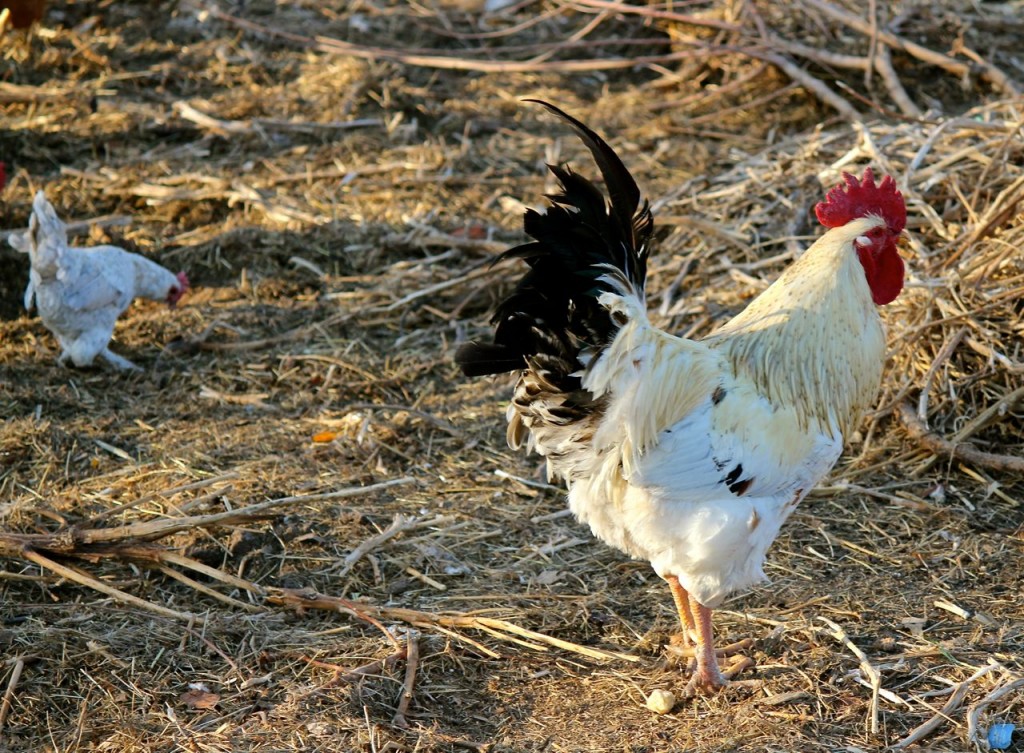 Claudius is also a bit of a warrior chicken, as his raggedy tail feathers can attest. But that’s a good thing, for your hens.

So I have some good news and some bad news. Yesterday I told little Mack that I was going to give away Claudius, and after he swallowed his disappointment (he likes all the roosters, natch’) I asked him to help me make a video of him whistling. He agreed to help me share this with you all.

So we climbed to the top of the chicken coop (from which vantage point we took these photos, it was Mack’s idea, and a good one, too) and we got lucky: the good news: Claudius was in a happy mood, and he whistled several times through “The Battle Hymn” and also did a few bars of “Jimmy Crack Corn” and I’m pretty sure I also heard a few measures of “All About That Bass.” Gosh, he’s got so much potential. Happily, we got it all on video.

The bad news: later, when we tried to put the videos into this post (and when it was too dark to go back out and record any more), we realized that some setting or other on my camera hadn’t been set correctly, so all that footage was lost. We shed a few tears over this, I can tell you. Quite a few.

So, I’m going to run this giveaway as simply as possible: I’ll be running it until this Saturday night, at midnight. You can enter two simple ways: 1. Share this post, of course (however you prefer), and 2. Leave a comment below. Tell me what you think of our Claudius! That’s it!

Just think . . . at the end of the week, this unique whistling rooster could be yours. 🙂 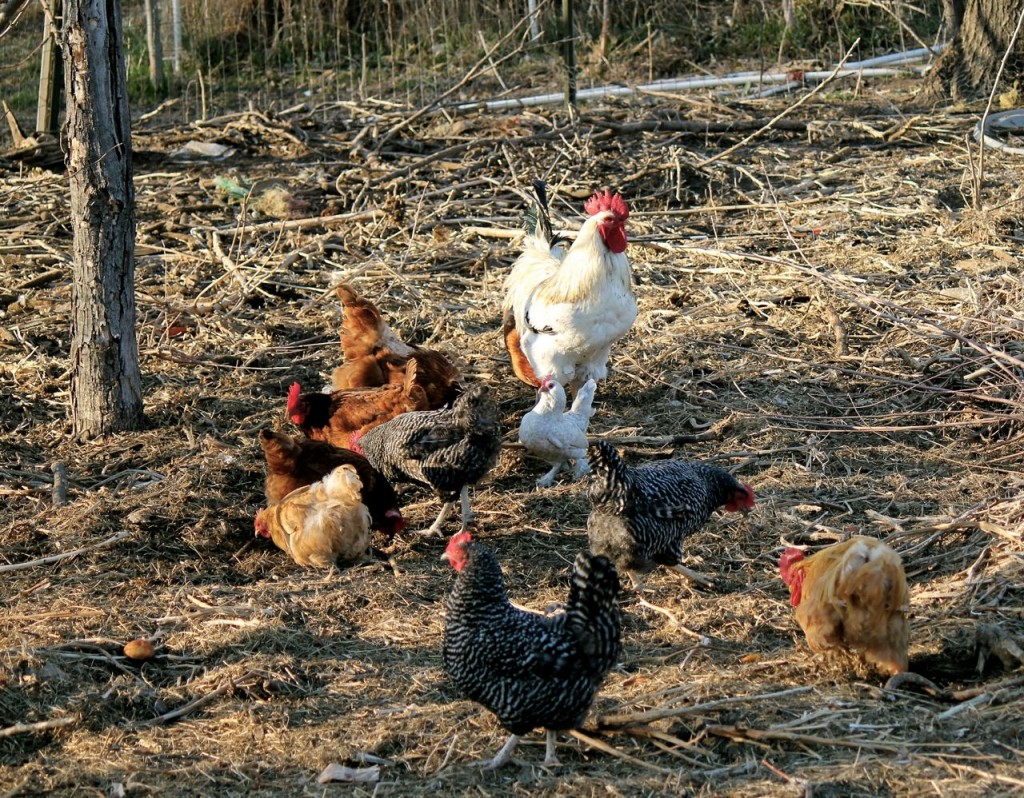 Here Claudius watches over his girls as they get a snack during the evening Golden Hour. He’s thoughtful that way.