It was 1990-something. It was Thanksgiving Day, and Bryan and I were getting ready to go over to his folks’ house for their Thanksgiving meal. Being the token nerd baker in the family, I had been asked to make a couple of pies and the rolls. The pies were done–I had labored over them the day before and I was hoping, praying, that they were good enough–but the rolls were weighing heavy on me, no pun intended. I was still quite young and feeling under the pressure to bring The Perfect Rolls to my in-laws’ Thanksgiving.

My mom did it all the time: she made the most fluffy, absolutely toothsome rolls. But I didn’t make rolls very often, and I knew that the possibility that the rolls would turn out dry, hard, over-baked, or over-risen and then fallen like pancakes, was quite real. Or burned to a crisp. Dropped onto the floor straight out of the oven and matted with dog hairs. All these scenarios had, in fact, happened.

No, I wasn’t born being able to bake bread with a tender crumb and a gorgeous crust. I’ve made my share of pies with crusts, by the way, that could crack the proverbial tooth.

Making all this stuff well takes practice, and plenty of it--and a bit of luck, as well. And also key to success in baked goods: undivided attention. Something I’m not very good at, by the way. *wince* 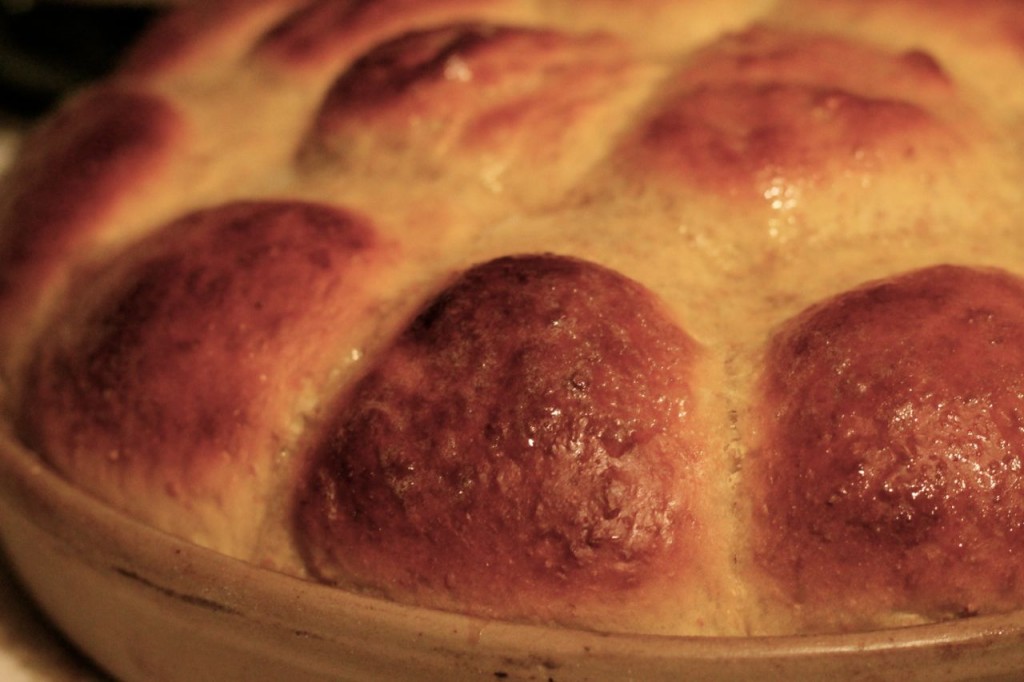 These are not your Brown and Serve Rolls.

Back to my bleak situation on that particular day: I had, roughly, sixteen small infants and toddlers careening around my too-small kitchen with me, digging into drawers and opening cabinet doors and mewling for snacks and attention and filling their respective saggy diapers. Bryan had long ago driven off to fetch his brother–who would spend the day with us–from The City. He had left the sixteen mewling infants and toddlers home with me, presumably, to assist.

By the way, fathers of mewling infants and toddlers alike, everywhere: if you are in charge of fetching something or somebody, and your wife is in charge of making delicate pastries and breads, don’t assume that the infants and toddlers will be any help in the kitchen. Get them a book or a toy or a snack or all three, and take them with you. Trust me. As adorable and dewy-cheeked and meltingly-sweet as they can be, in the kitchen: they–will–not–assist.

So I was on my own–if you didn’t count the 16 small infants and toddlers . . . AND the dog in the midst, too, not to mention our three cats who wandered through and kept hopping up onto the countertop in turn, threatening to lick the butter that was sitting out. You think I’m exaggerating? Trust me. I’m not.

I was feeling a touch of discouragement, fighting bitterness that I was In This One Alone, and thankfulness hadn’t yet captured even a tiny corner of my heart. Yet. It was Thanksgiving Day.

What’s the Thanksgiving equivalent to “Bah, Humbug!”? “Oh, crumbs!” or perhaps “Jeepers, why me??” That is, I’m quite sure, what I was muttering–darkly, and often.

Can you picture this bleak scenario? Into the chaos–of course–the ‘phone rang. None of the sixteen children were tall enough to answer the ‘phone, and it was a trick to stumble through them all without stepping on anybody, to get to that ringing ‘phone. But I did it.

It was my sister Anne, who often displays a remarkable and uncanny ability to sense the very second when I have reached my wit’s end, and then calls me and makes fun of me. Thus it was on this day. I piteously whined out my situation. “Bryan gone . . . all the kids need diaper changes . . . pie crusts are tough . . . still need to make rolls . . . why me??”

“Amy,” she said, cutting through to the chase. “Pick up some Brown and Serve Rolls on the way. The Millers won’t mind, in fact they won’t notice. They may even prefer them, you know. Heat them up when you get there, put them in a pretty basket, and boom. You’re done.”

I wavered, Elna blood running in my veins as it did. (And does.) Nothing but homemade would do, right?! Mom spits contempt on cake mixes. When we were kids, she fainted when we cried for boxed macaroni and cheese. She held rallies at the local grocery store to ban prepared foods of all kinds (not really, just teasing, Mom, I love you) when I was but a tot.

“Are you kidding me?” I croaked, sweeping a cat off the counter with one hand, and grabbing a toddler before he fell off a chair, with one fell swoop. “Brown and Serve?” My mouth tasted awful after saying the words. You know those rolls. They are cheap, they come in two colors–white and not quite so white–they come in a thin cardboard tray, slid into a plastic bag. I’m pretty sure there is no expiration date on the bag.

I looked around my kitchen. I still had to somehow wash piles of dishes and clean the counters of the pie-making mess that I had left the night before, and get all sixteen children ready for the trip to Bryan’s folks’ house. I noticed a baby up on the counter with another one of the cats, side by side licking the butter.

What a relief it would be to just pick up rolls from the store on the way . . . I felt a painful pang of guilt.

“Do it, Sister.” My sister urged. I bent. I did not resist. And, Gentle Readers, I did it.

I cleaned up the kitchen the best I could, changed and prepared all the children for the trip, packed a mountain of diaper bags, and commanded my bewildered husband to stop at the store for the rolls on the way. I wish you could have seen his face at that, but that, dear Gentle Reader, is another story. Suffice it to say: the day was not lost.

The rolls were . . . okay. I did brush a bit of melted butter on them and served them with Bryan’s mom’s homemade grape jelly, and as a conduit for butter and jelly, they were passable, though nobody raved about them. I don’t think anybody, in fact, made a single reference to them at all.

Those Brown and Serve Rolls were the 50-year-old housewife in the kitchen with a bunch of energetic 20-somethings. Invisible and not worth much of a comment, but nothing worth complaining about, either.

I did miss the glory I could have gained, if I had brought hot rolls made by my own hands, but not much. The thing was, I made it through the day with my sanity intact, which would not have been the case if I had made several dozen rolls from scratch–especially, in my roll newbieness if they had turned out awful–and then left the kitchen in a big mess to clean up later that night. In that case–with all the children and whatnot underfoot–it just wouldn’t have been worth it.

There are times when shortcuts are not appropriate, too: when showing your child how much you love him, for instance, lavish generosity is always appropriate. But in the matters of food . . .

That said. Gentle Reader. If I had known then what I know now, about how easy “bucket dough” is to make and how convenient it is to make bread and rolls out of it, I would have been in a much better place all the way around.

So this is my Thanksgiving week gift to you: my favorite “bucket dough” roll recipe. You can make this dough today–or tomorrow–or even the next day; put it into a lidded bucket, and sock it away into your refrigerator. When it’s time to make rolls (say, mid-morning on Thanksgiving Day), you simply pull out your bucket of dough and form the rolls, let them rest and rise for a short time while the oven is preheating, and then bake them. Slather them with melted butter right before you set them on the table. Voila.

No need, by the way, to let on to anybody how easy this is. Leave just a touch of flour on your forehead. Practice the weary look. Perhaps you’ll get out of dishes?

Easiest–rolls–ever. And totally worthy of lavish compliments. Here are a few pictures, just to coax you to try making them. 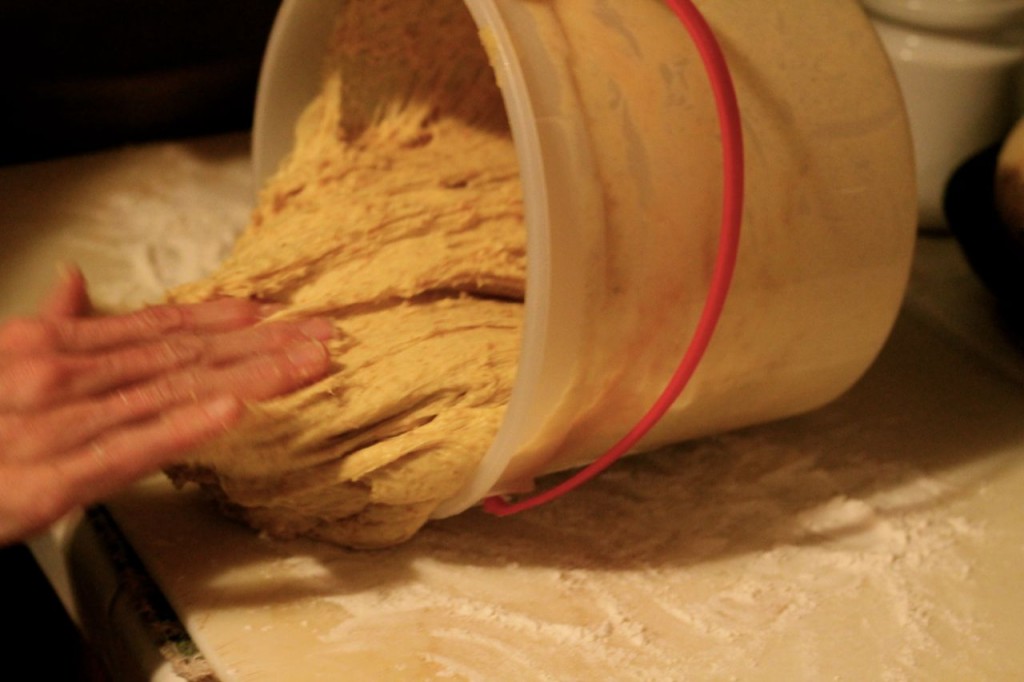 Dump your refrigerated dough out of the bucket onto a floured board . . . 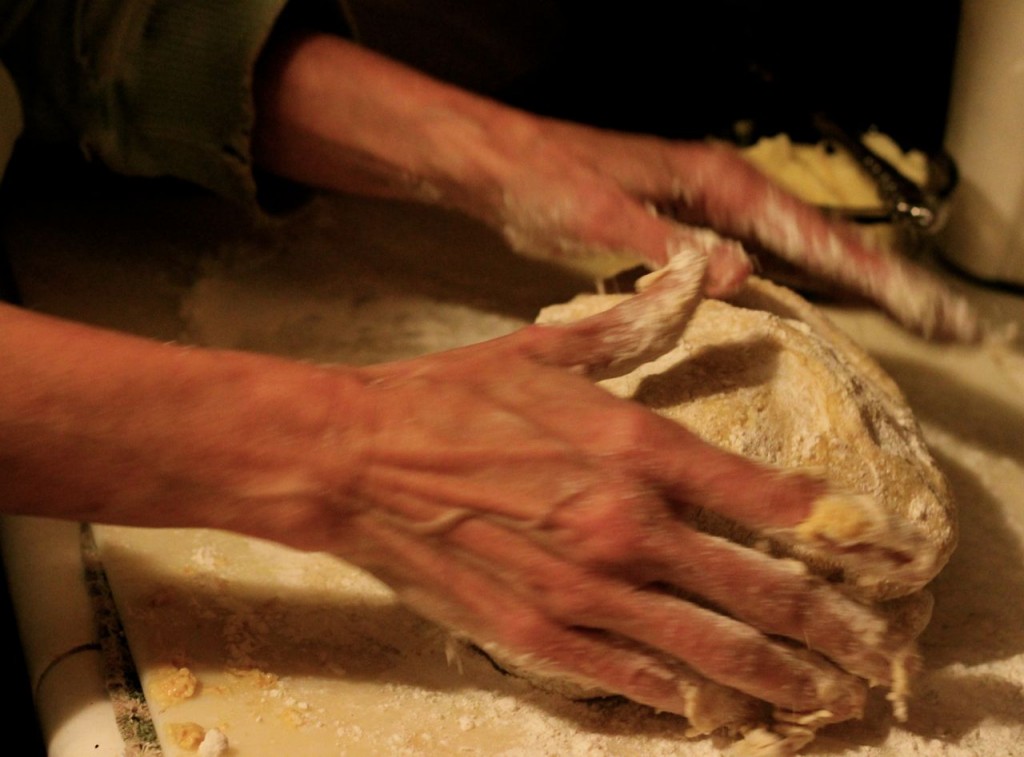 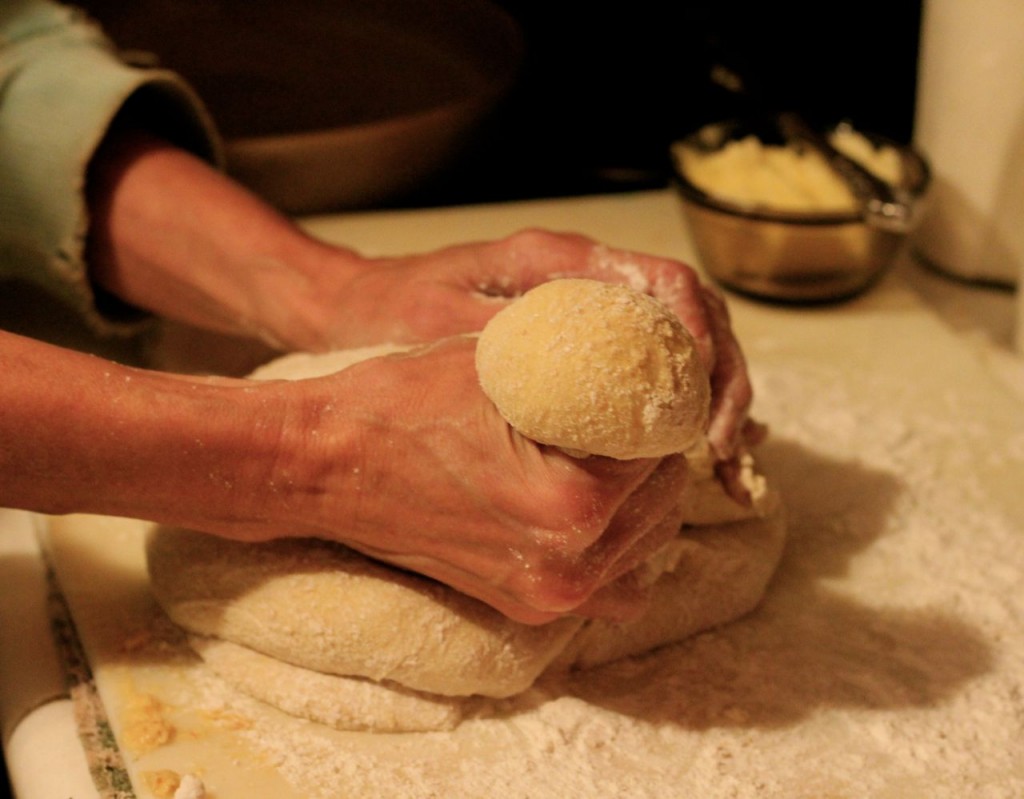 Pinch off a ball of dough a little bigger than a golf ball and  . . . 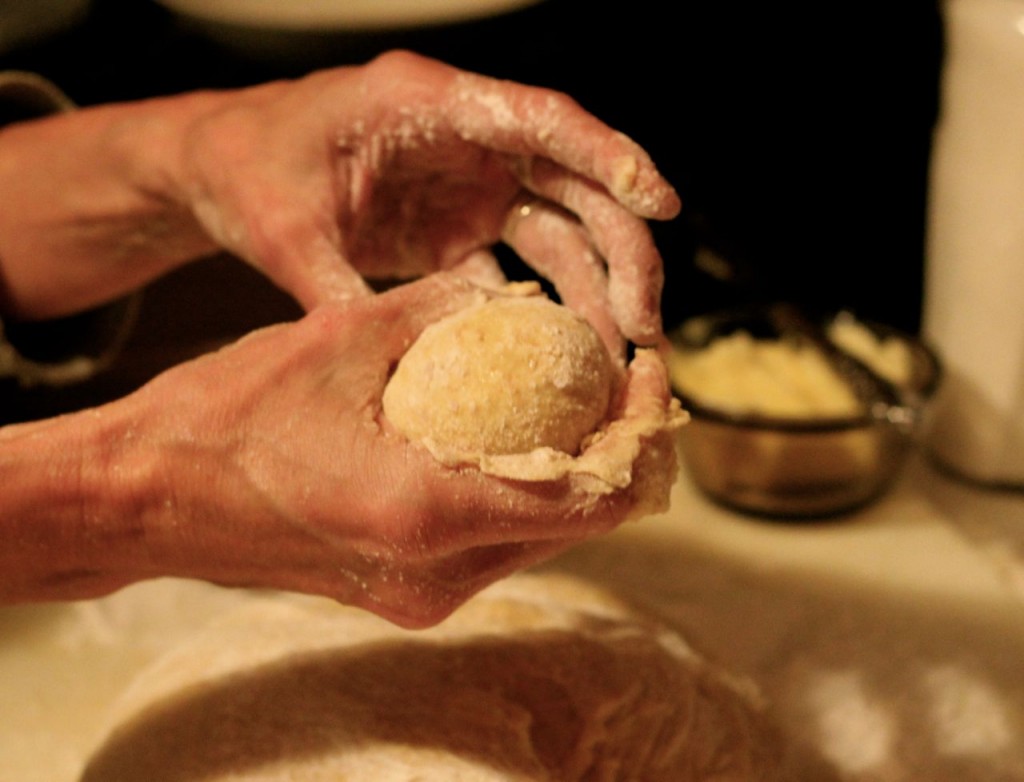 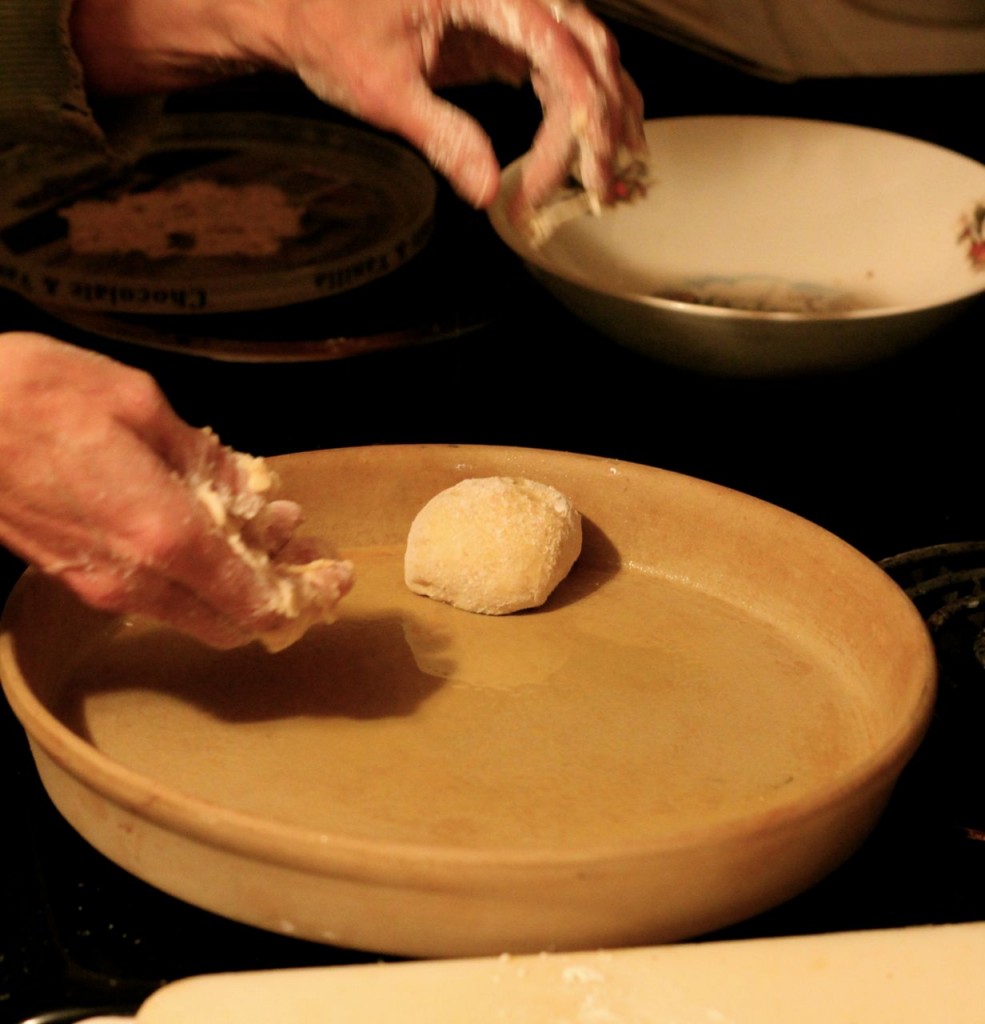 Put it into your greased pan, and repeat. 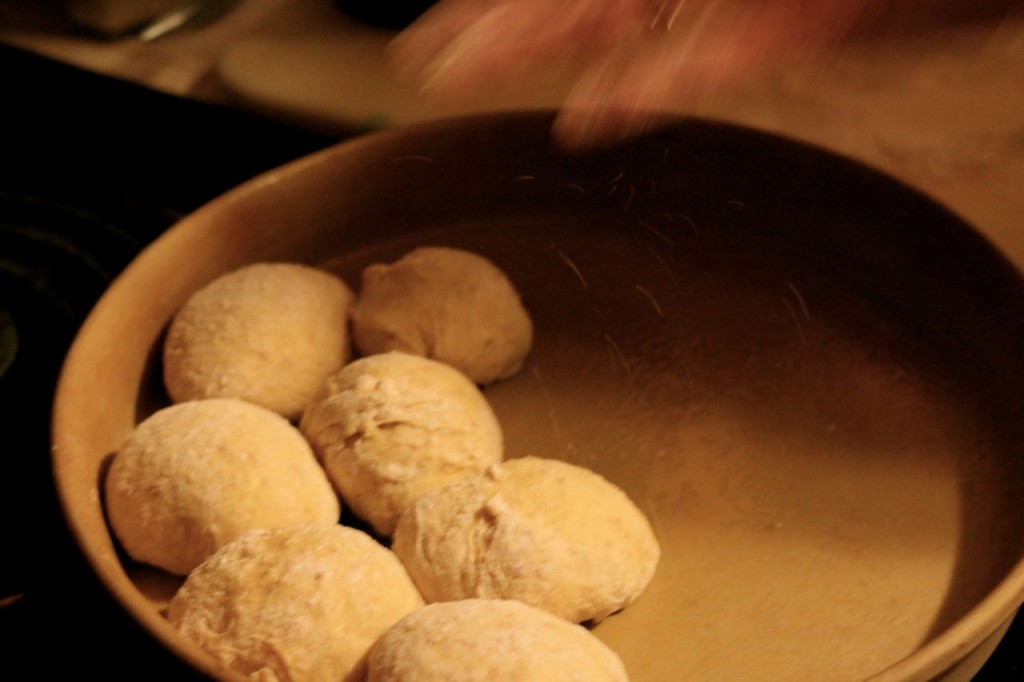 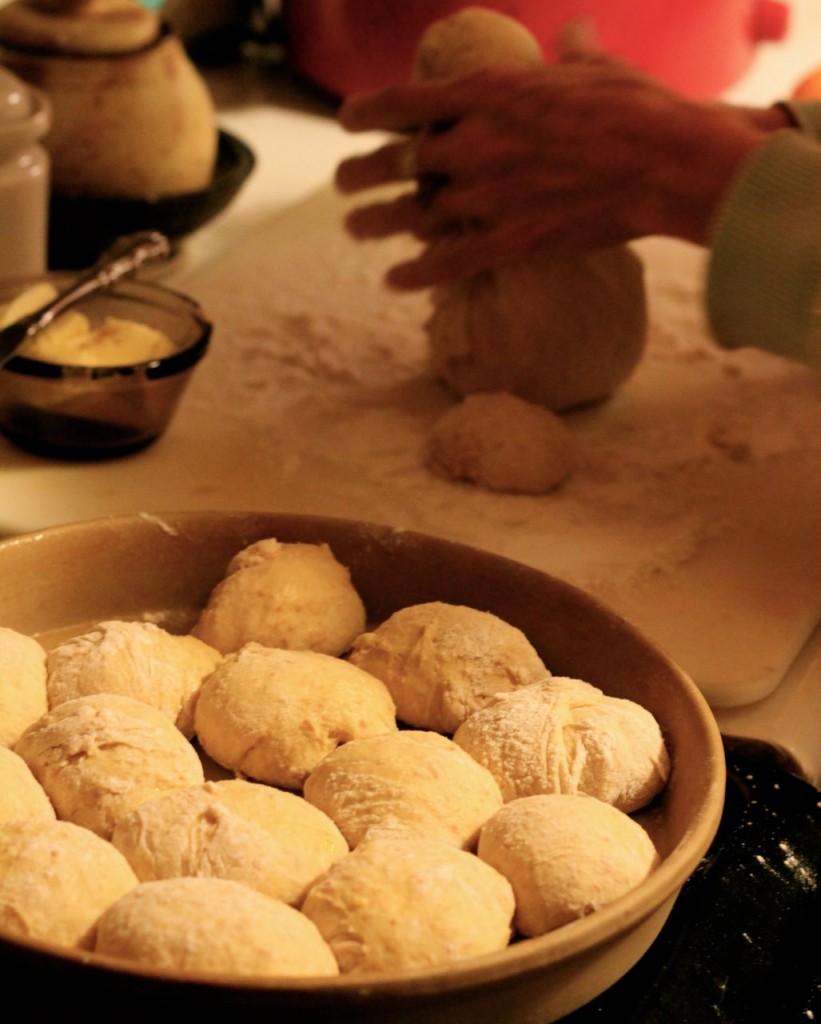 Your rolls should be barely touching. 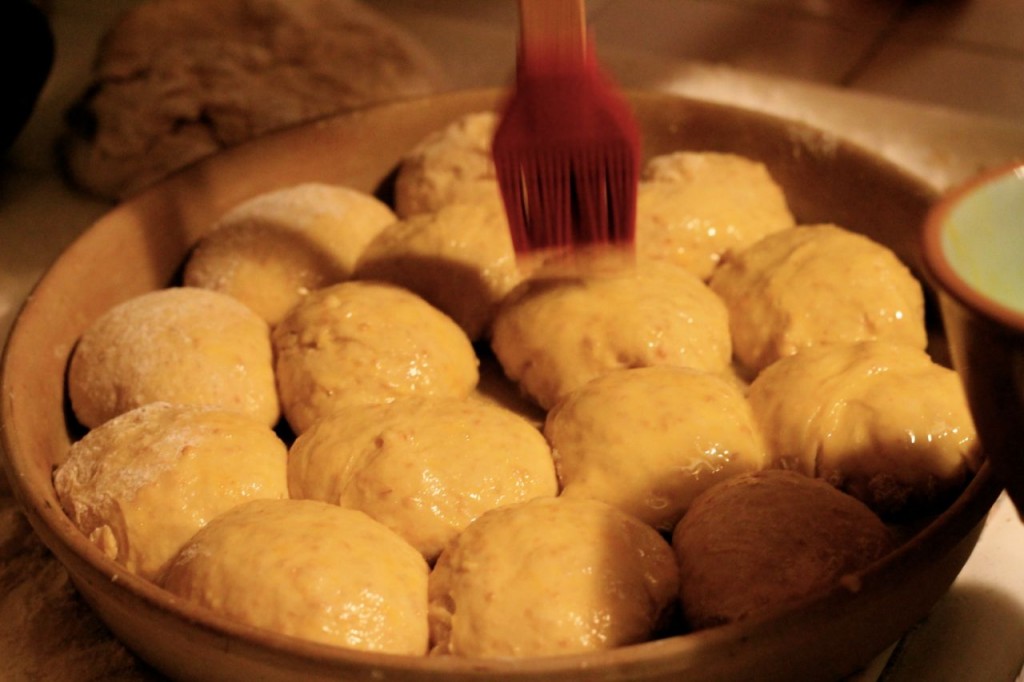 When your pan is full, brush the rolls quickly with egg wash, and let rise. 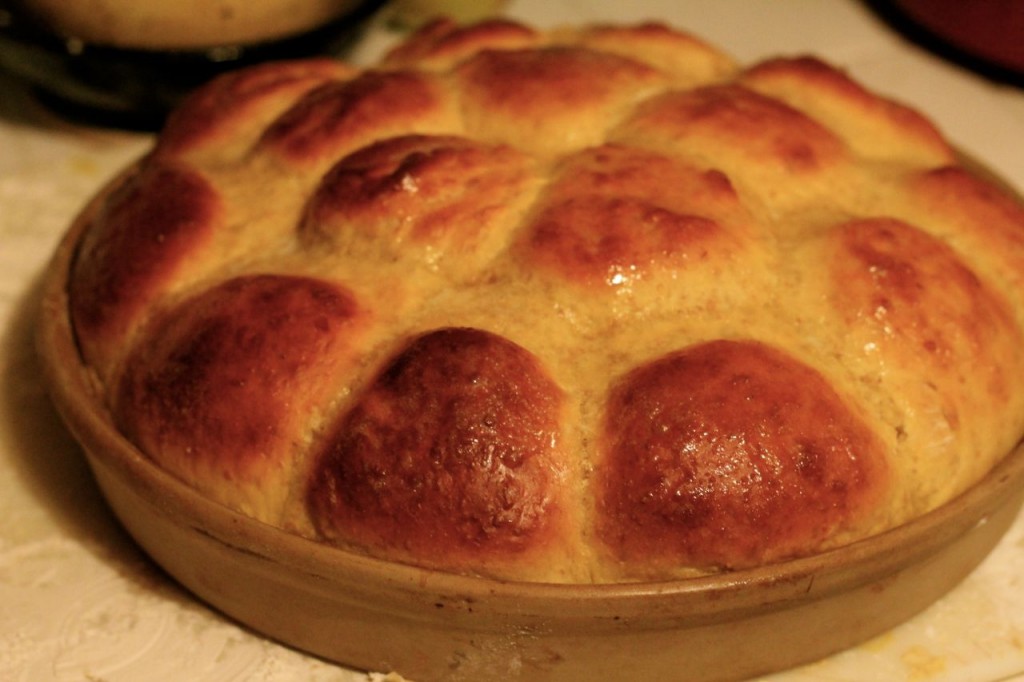 Here’s what they look like when they are baked. Ta-daa!

I have lots of roll recipes now, being the experienced baker that I am, but this is the easiest one, by far. And you’ll get plenty–plenty!–of glory points from these rolls, especially if you pull them out of the oven at the last minute, brush them with melted butter, and wrap them in a clean white tea towel, and serve. They really are as delicious as they look.

(So much better than the Brown and Serve.)

On to the recipe. Time’s a-wasting!

“Put Down the Brown-n-Serve Rolls, Ma’am, and Nobody Will Get Hurt.”
Recipe Type: homemade rolls
Cuisine: These rolls are as easy to make as they are impressive to eat. Best hot out of the oven!
Author: Amy from vomitingchicken.com
Prep time: 5 mins
Cook time: 20 mins
Total time: 25 mins
Serves: 2-3 dozen
A bucket dough made richer with melted butter and eggs is perfect for making soft, silky rolls, which are a dandy accompaniment for any meal! They can be ready in a pinch, if the dough is made the day before and stored in the refrigerator.
Ingredients
Instructions
3.2.2885

By–the–way, a dear friend of mine (and fellow blogger) has teased me mercilessly about looking down my nose at easy-peasey desserts and such, and yet she still had the courage to post this recipe. It looks to be a good one, by the way, even though it does use a cake mix (*gasp*) and I intend to make it very soon. Of course I’ll have to shop for the cake mix someday when Mom’s not with me . . . I hope you check it out, too!

Also. I’ll be linking up with those congenial folks over at The Prairie Homestead this week. Undoubtedly they’ll have lots of cool things going on over there. They always do! Come on over and learn something new with me!

28 thoughts on ““Put Down the Brown-n-Serve Rolls, Ma’am, and Nobody Will Get Hurt.””