By all accounts, our musical melodrama, The Fireman’s Flame, that we put on this weekend was a big success. Once again God blessed our efforts: proof that a couple of bumbling well-meaning parents with no training for producing theatre, but plenty of passion and fairly strong backs and a talented group of thesbians, can put on a good show. We had two big enthusiastic audiences; the kids performed with passion and high energy; all the tricky backstage tech stuff worked out after all; the audience left grinning and chuckling; the families of the actors and crew left exhausted but happy, too.

In the middle of an intermission the second night, I slipped out of the Green Room (where I was hanging out with my energetic thespians) to dash to the bathroom across the hall. I looked one way and saw a couple of drama parents running the Silent Auction, with people carefully considering and jotting down their bids. I looked the other way and saw several drama mamas selling concessions. These sweet ladies are volunteers who serve in order that our drama bills will get paid. “Geez,” thought I, “what an excellent team I’ve got. I am so blessed!” And so I was. And am. Not to mention supremely grateful.

Of course our melodrama had a big chase scene, this one involving the two teams of firefighters, carrying their apparatuses.

I’ll write another post about The Fireman’s Flame later this week, when I’ve had a chance to upload all my photos and give it some more thought.

There is a reason: it hearkens back to the cold night that our rehearsal space was taken over by the Boy Scouts. It was not a violent takeover, but merely a scheduling snafu, which drove us out to our vehicles and through the bitter driving wind . . . to our house. We couldn’t afford to skip even one rehearsal, and the only matter of course that we could figure was to take all the kids to our house. Before we headed for home, Bryan called over his shoulder to the drama parents climbing into their cars: “Give us 5 minutes!”

5 minutes. Ha. I gritted my teeth and prayed for patience. 5 minutes. Bryan was trying to do me a favor, but I knew that I actually needed several hours to make the house presentable for company. We had been spending every available moment at that time on building and painting set, practicing musical numbers, sewing Amalia’s costume, and whatnot. I knew how cluttered and dusty and just plain dirty the house was. I knew that we’d left the kitchen in a mess, with the sink full of supper dishes and a bucket of dirty eggs on the counter. Oiy. My pride was certainly going to take a hit. I braced myself.

Now please don’t make the assumption that I am a perfectionist where the appearance of my house is concerned, because I’m certainly not that. I just knew that the house had crossed the line from “comfortably lived-in” to “downright disgusting.” It had gotten so bad that I was a bit embarrassed when the dogs came in the house. “Sorry, Ollie, the house is a bit messy right now . . . oh don’t go into that room, Bea . . . ” And I had 35 people coming to my house in less than 5 minutes.

Timothy had hurried home before us, and was busily making a fire in the wood stove on our sun porch, the only room big enough to hold 35 people, and where we’d hold our rehearsal. In his resourceful way, he was hauling furniture out the window to the backyard, so we’d have enough space for a rehearsal of sorts. And the two freakishly broad cow-horse creatures that we’d made out of chicken wire and paper mache were going out, too. Timothy is a problem solver, and he doesn’t waste time at it, either.

I admire this about my son: he doesn’t moan and complain about the sorry state of affairs, he just puts his head down and figures out a way through it. I could learn a thing or two from him. Sigh.

I dashed into the living room and folded up a couple of blankets and loaded some wood on the fire in the living room stove, and tossed an armful of clutter into our bedroom, closed the door firmly, and hurried into the kitchen to do what I could to tidy it up a bit. I had, perhaps, at this time, 2 minutes left. I glanced out the window and saw the caravan of car lights coming down our driveway. It looked like my 5 minutes was already up.

The kids were either blessedly oblivious (far as I could tell) or blessedly gracious to the mess that surrounded them, giddy as they always are to be together and rehearse. At one point in the evening, I went into the main bathroom, to see . . . several buckets of grain sprouting for my chickens.

“Geez,” I thought, “We couldn’t ever just do things the easy way, could we?”

I quickly swept up a few grains that had spilled out of one of the buckets, and casually draped a bath towel over the buckets. Maybe nobody had been in the bathroom yet? A couple of the buckets had been there for several days, and were beginning to smell a bit fermented.

At that moment I realized that I had crossed the line from casual chicken fancier to crazy chicken lady.

Those soaking grains in my bathroom just clinched it. It’s winter, right? And so if I tried to soak and sprout grains outdoors, I’d end up with a block of ice (albeit with grains frozen within) so I have to keep the grains inside the house, preferably close to a water source, that is, a sink. So they are in the bathroom. Actually, my family hasn’t said a word about this, which amuses me to no end. Suddenly four 5-gallon buckets show up in the bathroom with grains soaking in them, and nobody seems to notice? 🙂

I used to do things the easy way, where feeding chickens is concerned. I used to bribe Timothy to take me over to the Co-op a couple of times of year to fill our little trailer full of cracked corn. I would mix the cracked corn with our layer ration and feed it to the chickens day in and day out. That is, cracked GMO corn. Then I started noticing (this is anecdotal: no double-control study has been done that I know of to prove this: it’s just my experience) that my poor hens were having problems, um, staying alive. About one hen every month or two would succumb to something, usually related to her egg-laying apparatus. I wrote about poor Phillipa, who had an egg stuck in her, um, in her vent for days, and what we went through to get that sucker out. Poor Phillipa. She recovered, but there were other hens who went through the same thing who did not recover. I wrote more about all that in another post. (But I don’t share everything with you, my Gentle Reader. Some things are just too sad to share, don’t you agree?) 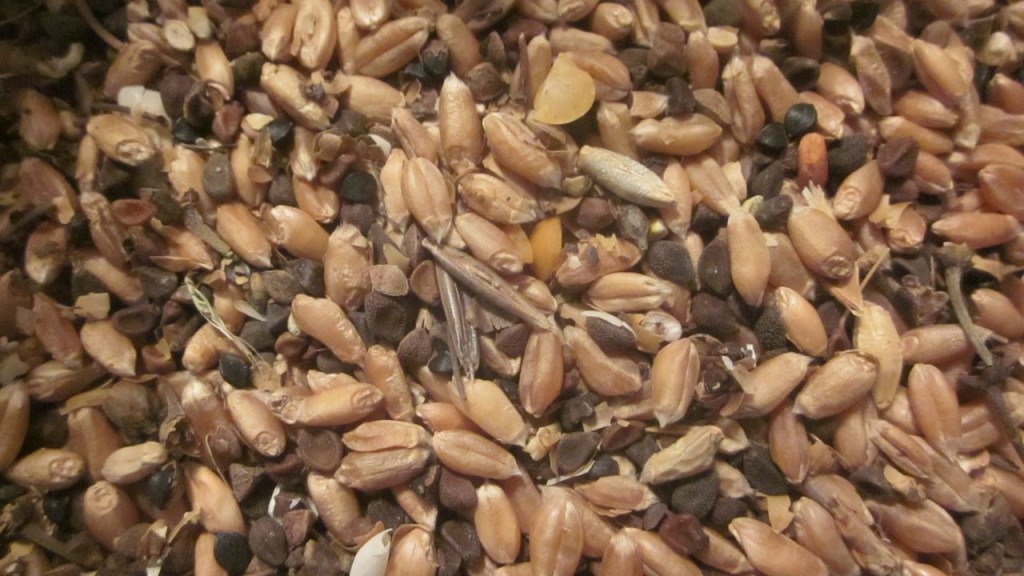 Here are the grains I buy, a mixture of weed seeds, barley, wheat, and whatnot, BEFORE sprouting. Dry and hard.

So I started doing things that were just a bit harder, but apparently are much better for my chickens. First, I found a source of organic mixed grains (they are “screenings” so they actually cost no more than the cracked corn, though we do have to drive an hour to pick them up) and then I started soaking them.

Some people take it even further and grow fodder from their grains. I don’t do that. At least, I haven’t yet. And others ferment their grains. Sometimes my grains (like that night that all the drama kids were at my house) get away from me and they might get a bit fermented, but I’m happy (for now, anyway) with just soaking them for a day or two before I feed them to my chickens.

I have three reasons that I sprout grains, and will continue to do so: 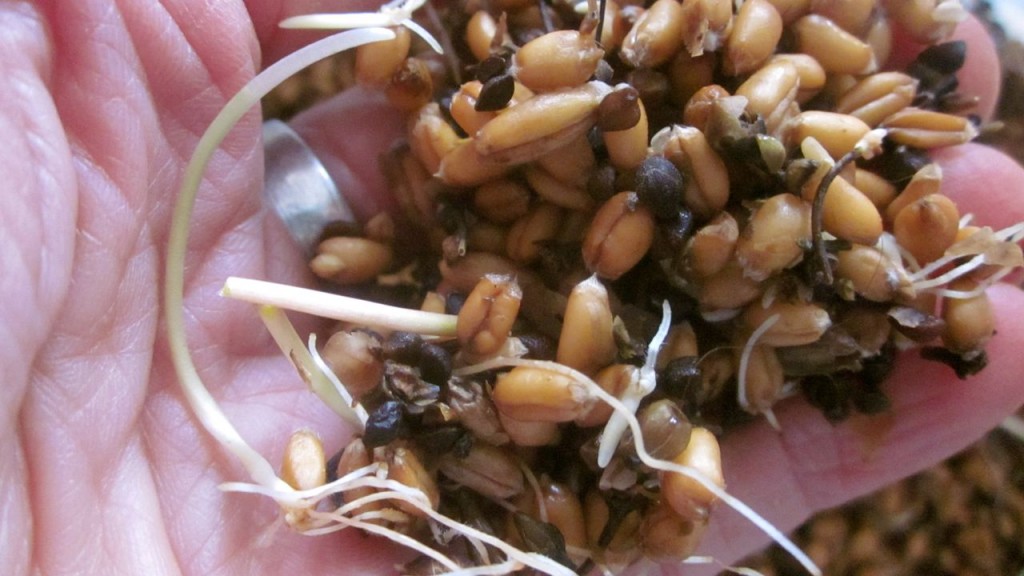 Here are the same grains, after a couple days in the sprouting bucket: swollen, fat, and sprouting! They look tasty even to me!

Okay now, perhaps you’re thinking of crossing the line to becoming a crazy chicken person, too, and soaking some grains for your chickens. How to do it? I have tried several different methods, and finally landed on the one that I like: I’ll coin it the pillowcase-bucket method. My friend Anne (of the Back to Eden garden fame) suggested a variation of this method to me, so I knew it would work. After some experimenting and tweaking, I came up with a method that works well for me. Maybe it’ll work for you, too?

First: I fill a clean white cotton pillowcase with the amount of grains I will need for a day (for my flock, that’s about half of a 5-gallon bucketful), twist the top closed, and place in a bucket with plenty of holes drilled in the bottom. This bucket I slide inside a non-holed bucket. Then I fill the top bucket with enough warm water to cover the grains and add the lid. I check it after a few hours and add more water, if necessary, to cover the grains. The grains swell quite a lot.

Voila! After the second day, the grains have sprouted and are ready to feed to my hungry chickens. And they clean up every last sprout and grain, let me tell you! 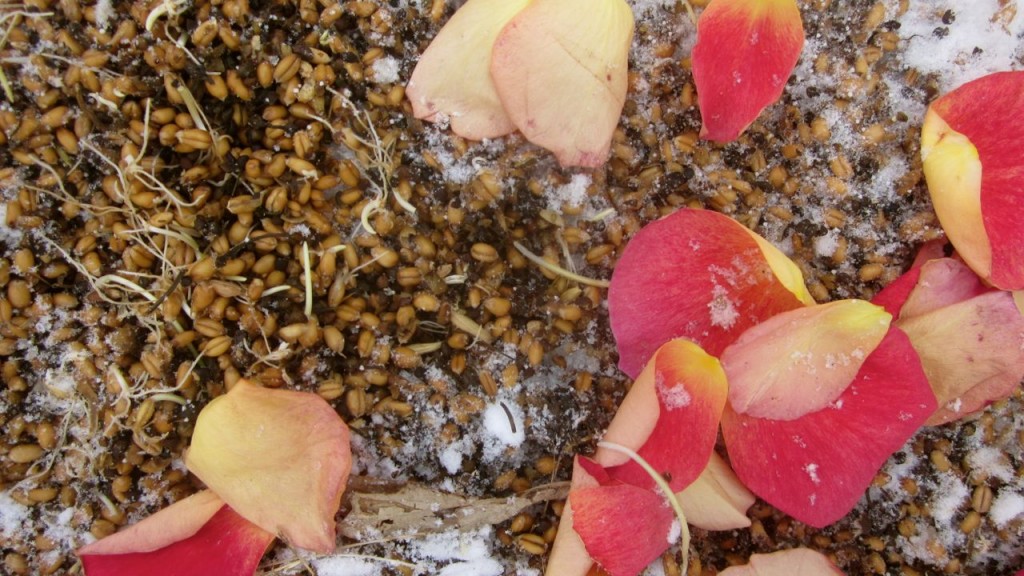 The “chicken trash” from the kitchen on this day included some spent Valentine’s Day flower petals. I had to take pictures of them. They were the prettiest roses ever.

I carry the bucket out to the chicken yard, and dump a trail of sprouted grains through the yard, including on top of the deep mulch that I’ve piled there for my flock. The chickens will scratch and eat those grains all day long. I also dump any kitchen trash (vegetable peelings, leftover crusts, expired veg, etc.) and they love it all. Our opportunistic cat, Tristan, always insists on first dibs.

So if you want  to try this for yourself, this is all you need: (I have a flock of about 50, so if you have less you can certainly scale this down, and use smaller buckets or even quart or two-quart jars). 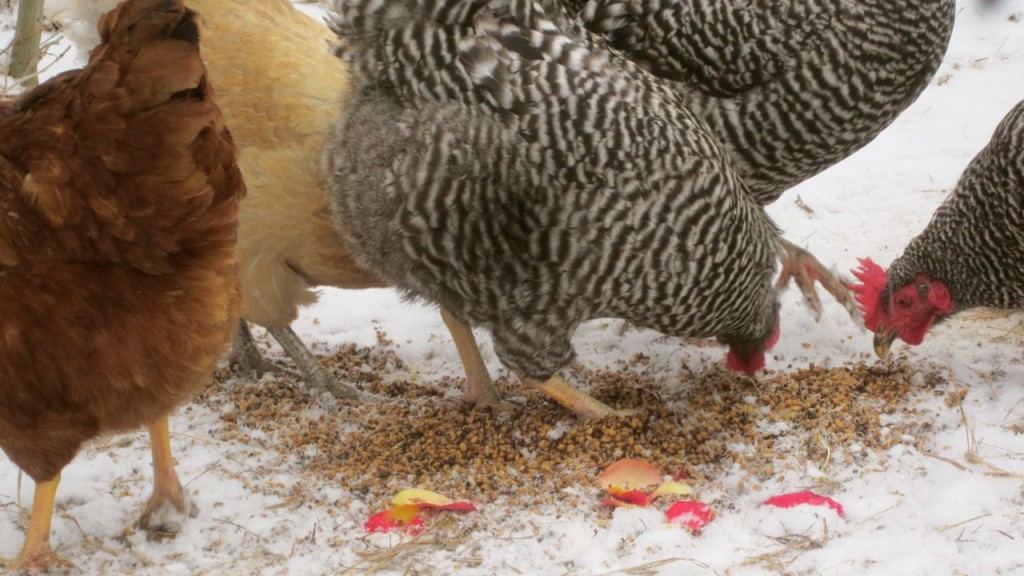 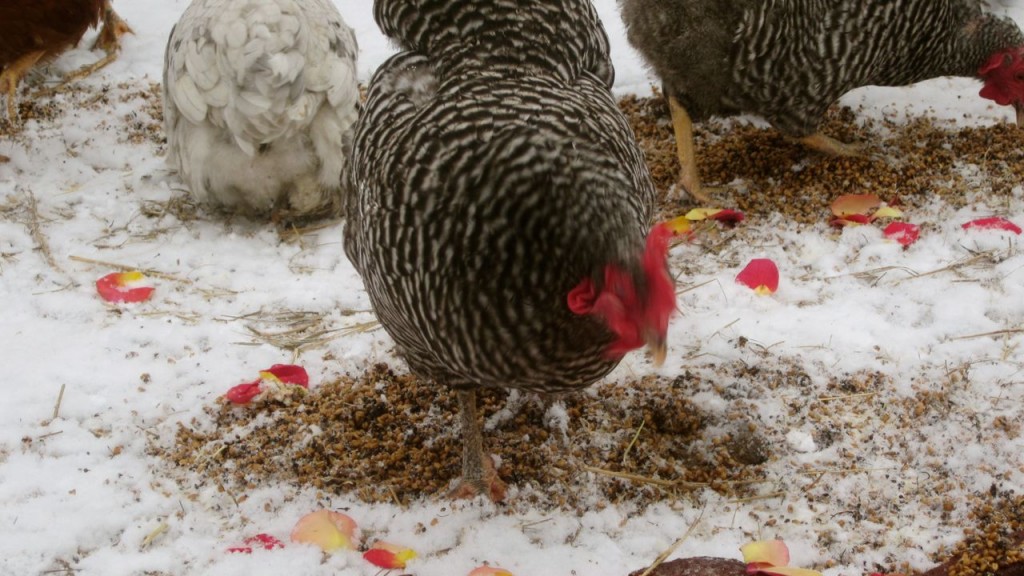 And check out my chicken ebook today! Here’s where to find it:

21 thoughts on “Sprouting grains for chickens: has it come to this?”