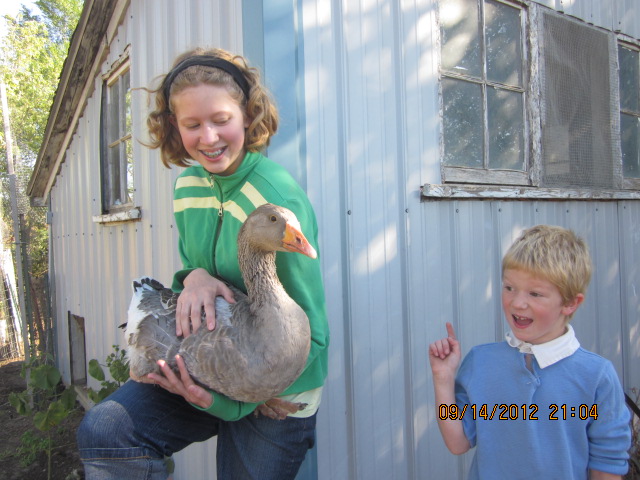 Here’s Lucy, after she moved herself into the chicken coop, in the arms of Amalia. I don’t know what little Mack was saying.

(This is a continued tale, and if you’d like a recap or to start at Day One, just click here.)

Dawn broke on the third day of our tussle with the Dreaded Varmint, and the live trap was disappointingly empty.  The night before, we had secured the back door of the chicken coop with several large and heavy bricks, and had pushed two massive rocks up against the front door, for good measure.  I thought there was no way anything but me could get into that coop.  Sadly, I thought wrong.

In front of the coop, I made the ghastly discovery that something tore the screen off the front door window (about four feet off the ground) during the night and had climbed into the coop through the window.  Inside, I discovered that the Varmint had then killed and eaten three young pullets, taking the time again to polish up the bones.

As far as I knew at this point, I had lost eight chickens to this predator.  I was beyond angry at this thing, and I was beginning to dread bedtime.  Also, I was feeling a little frightened of the thing, doggonit.

Another sad incident:  Blossom, our young goose and daughter to Lucy (who is pictured above) came up missing.  I suspect the Dreaded Varmint carried her away, and my heart remains heavy about that.  Lucy moved herself into the chicken coop, and I realized that she has more smarts than I have ever given her credit for.  To this day, she spends the day with the chickens, and sleeps in the coop at night.

2 thoughts on “The Dreaded Varmint, Day Three: a ghastly discovery”