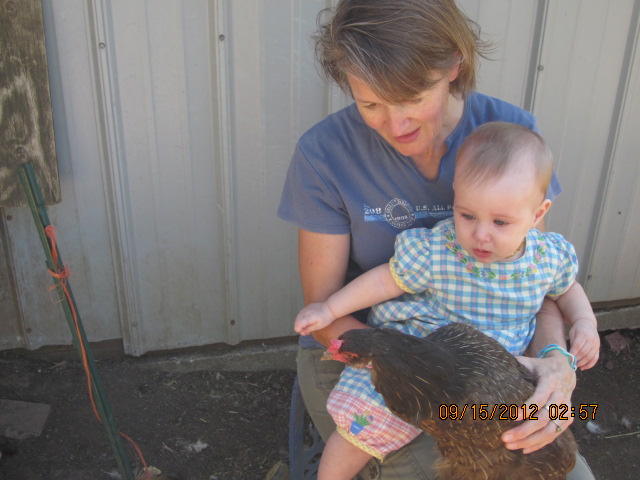 I’m sticking this in here because my little granddaughter Anya is the cutest thing around, and I thought you’d like to see a picture of her–here, with me, and a chicken, of course.  (She’s not a chicken lover, as you can see from the expression on her face.  Yet.)

At my dad’s behest, we borrowed his live trap too, so we were armed now with two live traps, and piles of determination, and a splash of optimism.  We baited one with the remains of a dead chickens from last night’s kill, and put a fresh can of tuna in the other.  We had doubled up on our traps, and varied the bait.  These seemed like smart moves.  I was optimistic and hopeful.  Surely we’d catch that Dreaded Varmint now.

The good men in my life were helping me escalate our defensive maneuvers in number and intensity.  My eighteen-year-old son Timothy had spent time out by the chicken coop in the evening, just watching, his new iPod in hand in case he had an opportunity to take a picture with it.  Little Mack coaxed me to scramble up on the chicken coop with him for a few hours, to watch for the varmint.  We spent an interesting evening there, and I chronicled it here.  He had an old camcorder in hand, to film the event if the Dreaded Varmint showed up.  I was getting over the ‘flu and just trying to hold on until bedtime.  I wasn’t holding my breath on the point of seeing our predator, since we were making plenty of noise and it was daylight, and the wily critter had shown us already that he had some smarts, not to mention stealth.  Timothy offered to install hail screen on the front screened window of the coop, figuring that would be the next point of entry, and also repaired the torn-out screen on the coop door.

When I was awakened by a chicken squawking during the night, good husband Bryan got up with me to let the dogs out, and then we stood and watched as they dashed about in the darkness, doing their job of furiously intimidating anything out there in the long grass.  I’m sure the grubs and the crickets, at least, were terrified.

This was a family fight, now. It was no longer “Me Against the Dreaded Varmint,” it was “Us Against the Dreaded Varmint,” and this thought buoyed me.  It gave me a measure of hope.  However, when I finally drifted back to sleep that night, I dreamt that in the morning, all the white chickens were dead, lying in a pile in the coop, and a white duck, as well.  Also a small sheep.  This situation, clearly, was starting to wear on me, especially since we didn’t own a white duck or a sheep, small or otherwise.  My mind was rebelling.

What would we find the next morning?  Stay tuned . . .